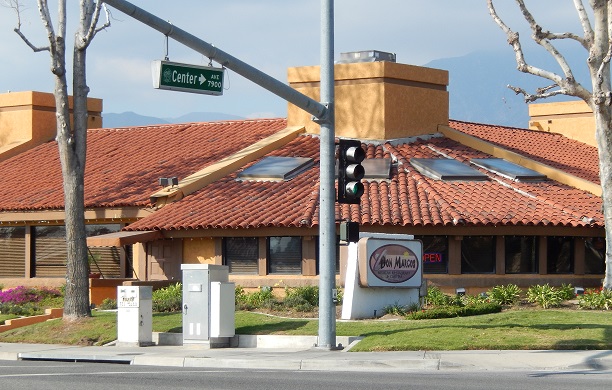 Don Marcos opened last week in the former Whole Enchilada/Socorro’s space a bit west of Haven Avenue, an ambitious startup in a down economy. But the restaurant is said to have been hopping from day one, and on Wednesday evening, cars continually pulled in or out of the parking lot and dozens of diners nearly filled the sprawling restaurant. Depression? What depression?

A hostess kept an eye on the parking lot and came out to open the door for anyone entering, a nice touch. There was no wait when we arrived, but the waiting area is inviting and next to a station where the staff makes tortillas. Much as before, the seating area is divided into small rooms of a half-dozen booths. Our room had an aquarium.

Our table got arroz con pollo ($12), chile verde ($11) and chicken mole enchiladas ($10). The first dish, chicken and rice, had both relleno and ranchero sauce and was topped with jack cheese. The second dish was chunks of pork with green sauce. The third was two enchiladas topped with mole, a sauce of chocolate with cinnamon.

We liked all three dishes, and the corn tortillas were especially good. A margarita was half ice but, at $5.50, deemed reasonably priced. The only real complaint anyone had was about the indie rock music in the background, which brought us the Dave Matthews Band, Gwen Stefani and Fallout Boy. “I’m not here for white guy music,” the Latina in our group groused.

There is better Mexican food to be had, at sitdown places like Chalio’s Birrieria in Pomona or Taco Hut a few blocks west of Don Marcos (and far worse Mexican to be had a few blocks east at On the Border). But Don Marcos seems to bridge the gap between homestyle Mexican food and Chevy’s, being comfortable for diners skittish about an authentic ethnic experience while offering what is actually pretty good food.

Verdict: A pleasant surprise. But ditch the lame music.