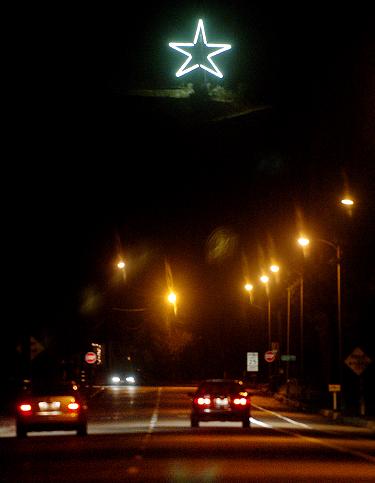 Feel free to share your thoughts about the Star below. And Merry Christmas.

Tonight, the Star in San Antonio Heights is shining bright and can be seen from miles away. If you’ve missed it the past few decades, travel along the 210, 10 or even the 60 freeways between Thanksgiving and New Year’s, near Euclid, and look up. The Star is a wonderful symbol of community, hope and endurance.

It was first built by Mr. and Mrs. Hostetler in the 1950s and its tradition as a holiday fixture has continued to today. After enjoying their spectacular view of the twinkling city lights below, the Hostetlers were inspired to return the favor by building a big Star that could be seen from the valley. The original Star was built out of wood and was lit with ordinary Christmas lights. The Star was dim, although it was improved over the years, and soon became a fixture at the top of Euclid during the Christmas season.

During an energy crisis, the Hostetlers would sacrifice turning on their furnace so that the Star could be lit for the community to enjoy. Years later, when the property was sold, the Star was still expected to shine — and it has.

Ken Petschow and the San Antonio Heights Association were diligent in making sure the Star was lit when the property was in foreclosure; Ken later purchased the property, inheriting the Star, in 1996.

Over the years, the Star has been blown down, burned to a melted pile of aluminum and even stolen by thieves (who apparently wanted to Star all to themselves).

In addition to the light and joy the Star brings during the holidays, it has also been a symbolic beacon of patriotism and hope at various times in the recent past.

The Star was shining bright following the attacks of September 11, 2001 and was lit as a final act of defiance against the onrushing Grand Prix fire on October 25, 2003. The fire eventually destroyed the star; neighbors poignantly recall hearing the popping sounds as it crumbled and melted away.

However, that was not the end of Star.

Like the proverbial Phoenix rising from the ashes, the Star was to be resurrected as San Antonio Heights recovered from the devastating fire damage.

The residents of San Antonio Heights join together with members of neighboring communities such as Alta Loma, Claremont and Upland, forming the “Star Community.” They collectively raised funds for the materials needed for construction and by December 2003, a new and even brighter Star shone out over the valley.

During the holiday season of 2006, the Star did not shine for the first time since 1979. The Star was disabled when thieves stole the copper electrical wiring. This created an eerie, dark feeling at the top of Euclid; however, the spirit of the Star was still alive in San Antonio Heights. Residents displayed their own stars in their yards, some were small and some were enormous. As they had in the past, the community worked together to raise the funds to revive the Star for the 2007 holiday season.

Considering the rich history of San Antonio Heights, the Star seems a fitting mascot for the community. In 1892, our nation’s first commercial long-distance electrical transmission came from San Antonio Canyon to San Bernardino. As such, it is decidedly appropriate that San Antonio Heights is illuminated as “the Star community,” as it is the true Star of the Foothills.