Wednesday’s column (read it here) compiles three more literary(ish) references to the Inland Valley, the most startling being from Beat writer Jack Kerouac, who name-dropped Cucamonga in unique fashion. There’s also a mention by thriller author David L. Goldman, and another by humorist Dave Barry.

Would you like a little behind-the-scenes info? I wrote this column in February (!) for use during a vacation, but decided to sit on it because it seemed like a perennial. Didn’t need it during my June vacation, though, and decided because of the Thanksgiving angle that I might save it until then. Which I did, after rewriting the ending last Friday. Also, Wendy Leung having left for another newspaper job in April, “colleague” became “former colleague.” Otherwise, it was full steam ahead.

Metrolink’s Weekend Pass will be good two days longer this week only: from 7 p.m. Wednesday through Sunday. Four full days and a smidge of a fifth, all for $10. Details are here. Trains will operate on a Sunday schedule on Thanksgiving and then back to full service Friday, Saturday and Sunday.

“You’ve got to stay away from Devon. He’s no good for you. He’s broken hearts in Rancho Cucamonga, San Bernardino, Santa Clarita and Redondo Beach. I don’t want him to go to your apartment in Angelino Heights.”

Every episode is like a geography lesson. And a driving lesson, what with characters discussing their exact route to get anywhere. Watch the episode here. Thanks to reader Robert Garcia for the link.

My home’s lack of air conditioning was a topic here last summer when our heat wave made things a trifle warm for me, as well as for some of you likewise in an older home.

My utility bills will rise this winter, as I have a gas wall heater and an electric space heater. And I’m almost never warm enough. If only some of that summertime heat inside my house could be stored somehow and released as needed during winter…

Sunday’s column (read it here) has items about the cameos by James Bond’s producer (a Harvey Mudd alum), a TV shoot in downtown Pomona, a minor addition to downtown Ontario, a reader’s Mayfair Hotel memory and the restaurant that will replace Claremont’s Harvard Square.

Some James Bond fan went to the trouble of compiling every cameo, fleeting glimpse and voiceover of co-producer Michael G. Wilson in the series, an impressive enough feat that I’m going to the trouble of sharing it here. Wilson is an alumnus of Harvey Mudd College in Claremont. 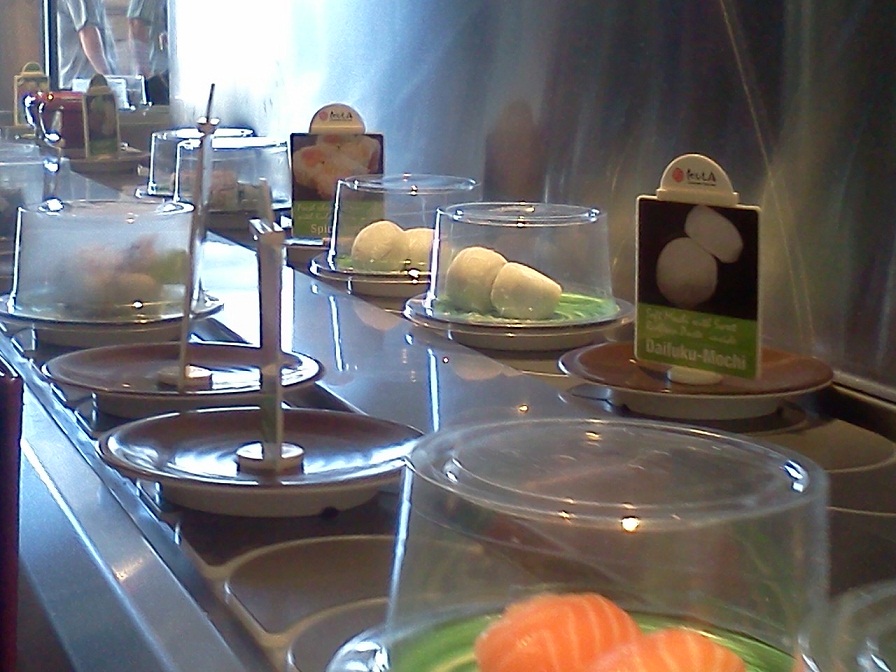 Said to be the Inland Empire’s first revolving sushi bar, Kula opened in August 2012 across from Ontario Mills. It’s a Southern California chain with six other locations, including Rowland Heights. Revolving would seem to imply it’s round, but really it’s a conveyor belt that wends its way around the room. It’s almost like an elaborate model train layout, only with salmon nigiri instead of coal cars.

Almost everything is $2, whether it’s sushi, hand rolls, cut rolls, salads, grill items, desserts or sodas. (Udon, however, is $5.) No matter where you sit, plates trundle by, covered by a clear plastic lid, ready to be snagged off the belt. A friend and I had lunch the other day, leaving stuffed after a total bill of $32.

Kula isn’t the place to go for high-end sushi, obviously, and the cuts of fish were thinner than is typical. Most plates had two pieces, meaning you and a companion could each have one piece and move on. The experience was novel, and if you’re undemanding, the sushi is good enough. You can sit at the sushi bar if you like conversing with the chefs, although they seem busy cranking out the sushi; for everyone else, you don’t really have to deal with anyone. It’s kind of like the automats of old.

The closer you sit to the bar, the fresher your items, potentially. We sat in the middle of the room. Pointing to the folks at the far end, my friend commented, “Those people really get whatever it is we don’t want.” I suppose the people at the bar were saying that about us. 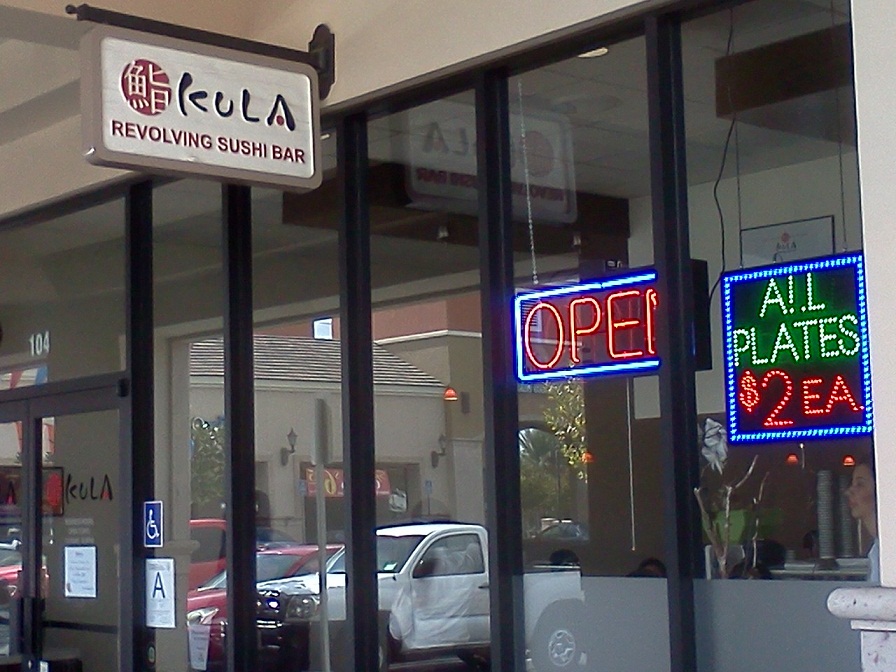 Friday’s column (read it here) begins with a followup to the 20th anniversary of the 909 area code’s inception. Following that are short news items, some about local restaurants coming and going, and an item about Pomona’s Measure T, whose main proponent says it wasn’t about what I said it was about.

A long but interesting piece by Pomona College Magazine’s Agustin Gurza about the troubles at the Pomona Public Library, headlined “The Book Budget Bind,” can be found here.

In their defense, city administrators argue that Pomona has been hit disproportionately by hard times, leaving them with only painful options for cutting the budget. The city’s tax base, already weak in comparison to some wealthier neighbors, was crippled in recent years by the flight of major retailers. Car dealerships shut down. Big-box stores like Toys “R” Us left town. The result: Pomona’s sales tax per capita was $87 in fiscal 2010-11, compared to $316 for the nearby city of Ontario.

The paradox in this municipal numbers game is that the deeper the economic crisis, the more people need their free library. That is especially true, supporters say, in a poor, predominantly Latino city like Pomona where people may not have Internet access at home and rely on the library for school research, job searches and even adult literacy lessons.