Wednesday’s column begins with news that a favorite former hangout of mine, Borders in Montclair, is set to become a furniture store. (Yawn.) Also, readers school me about the old Convair (not Corvair) plant in Pomona, new Pomona council members are sworn in, and we learn about two new restaurants headed to Claremont.

Let’s say the Mayans were right and the world ends Friday. What plans do you have between now and then?

In August, a plumber came by to fix the toilet and we had an exchange about the rock in the tank. He said that even though it doesn’t accomplish anything, the rock should stay right where it is: “It’s found its natural place of rest. You wouldn’t want to disturb the natural order of the universe.”

He returned last week to fix a kitchen faucet that had gone from drip-drip-dripping to emitting a steady stream of water, 24 hours a day.

My landlady, he reported, had just returned from a short vacation (who knew?) and had come down with something, probably on the plane home. “All those germs and gunk floating around in that recirculated air,” he said with a shudder. “It’s like licking a public water fountain.”

His assistant groaned, as did I.

“Too much? Maybe that wasn’t the best analogy,” the plumber admitted.

We discussed pay phones, a past source of germ spreading. You know, talking into a mouthpiece that may not have been wiped down in a long time.

I mentioned the oddity of businesses that have removed a pay phone but left behind the wooden carrel (I don’t know what else to call it) that once held the phone, with its shelf below for a nonexistent phone book. This fixture is instantly recognizable to most of us, but anyone under the age of, say, 10 would have no idea what it once was. I guess these objects are too much trouble to remove. Either that, or everyone’s waiting for a pay phone revival.

The faucet was duly fixed, the water flow stanched. I thanked them; the round-the-clock stream of water gurgling down the drain had put me on edge.

“It’s the drip that will get you,” the plumber’s assistant said sympathetically. “It’s like getting waterboarded in your own home.”

The plumber got the last word. “We’ve left you with all kinds of interesting visuals today, haven’t we?” 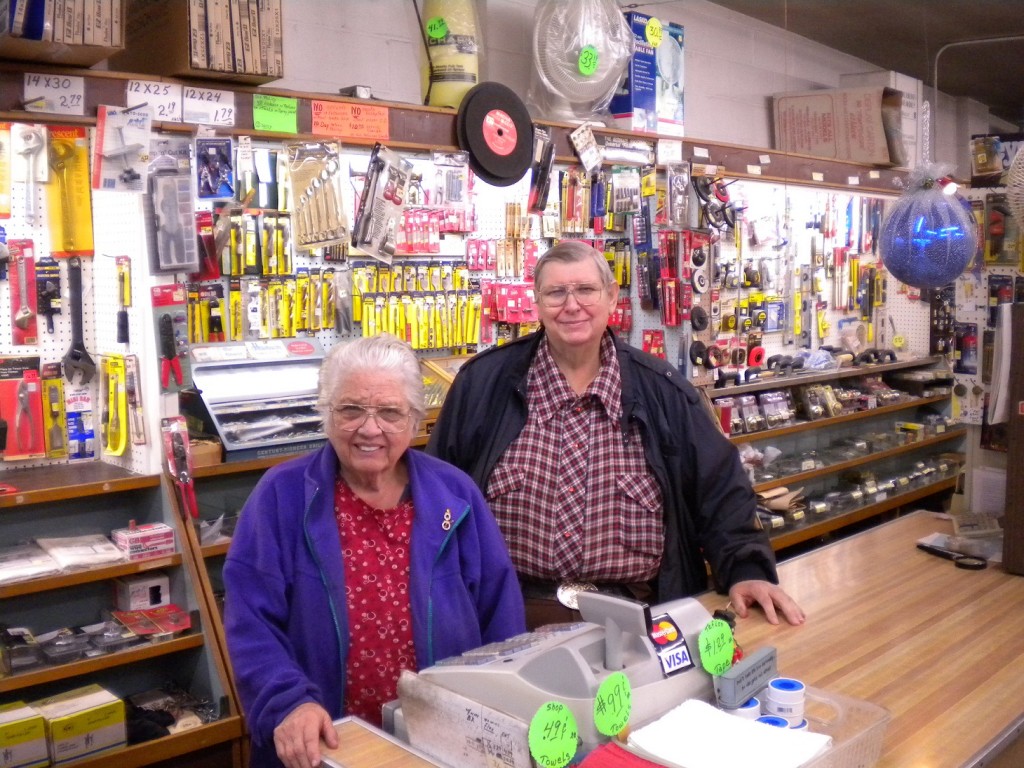 After 63 years in business, Westmont Hardware in Pomona (1612 W. Mission Blvd.) will close early next year. Above are owners Patsy Koning and Russell Riedel. The store was founded in 1949. Riedel started there as a teenager in 1967, became manager in 1975 and bought it in 1989. Sunday’s column is about the couple and the homey store, an anomaly in this day of big-box hardware stores. 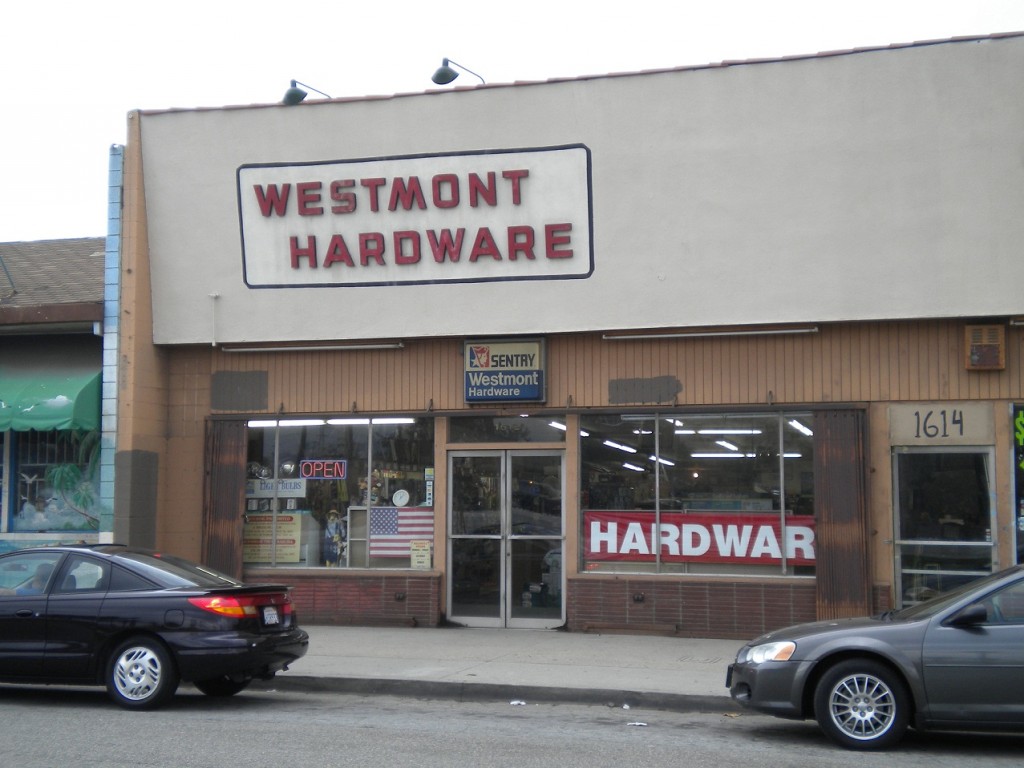 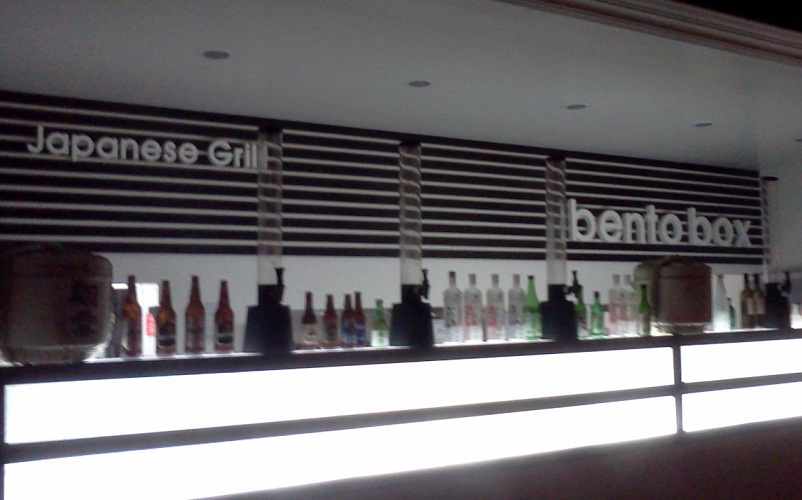 Casting about for a local place to have ramen, friends and I found Bento Box, about whose ramen a Yelp diner raved (“Try the Ramen. Dear God, try the Ramen”). We met for dinner at the Chino location, on Central just above the 60, part of a shopping center with Goodwill and 99 Cents stores.

Not promising, perhaps, but Bento Box (its website is here) has an impressive modernist interior with parquet flooring, a gleaming bar, the requisite industrial ceiling and indie rock on the playlist: the Yeah Yeah Yeahs, Hot Chip and Vampire Weekend among them. Definitely hip. It was a quiet night, the music was unobtrusive and the conversation flowed. There’s no sushi bar, which may also keep the noise level down; sushi comes out of the kitchen.

Despite the Yelp rave, the menu had only one ramen soup ($9), which one of our group ordered. Sticking with the theme behind the restaurant’s name, I got a bento box with sushi and sashimi ($12, pictured), and the third got a baked lobster roll ($12). We found the food average, the atmosphere notable. Thursdays, the day we visited, drinks are half-price with an entree. One of us got a raspberry mojito for $4 and liked it.

In short, this shouldn’t be your first choice for Japanese food, but if you’re in the area, it’s a comfortable, pleasant spot to hang out. 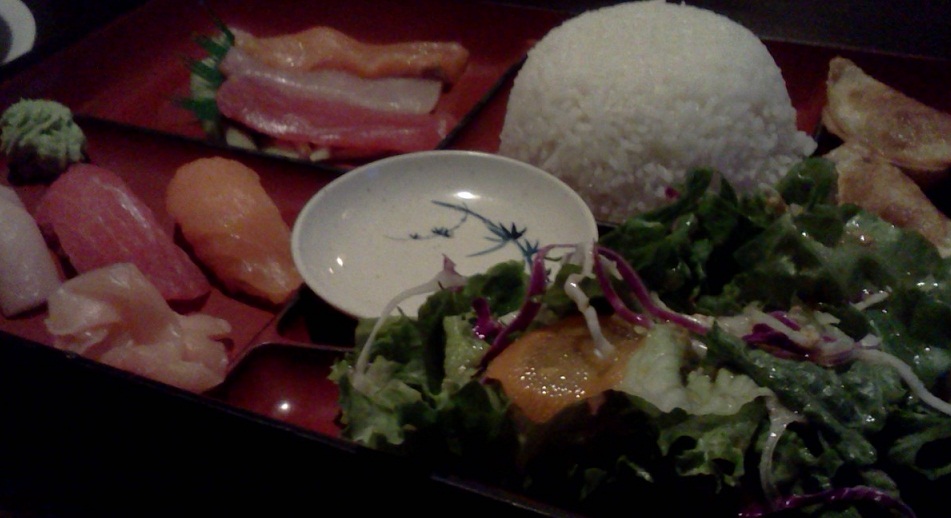 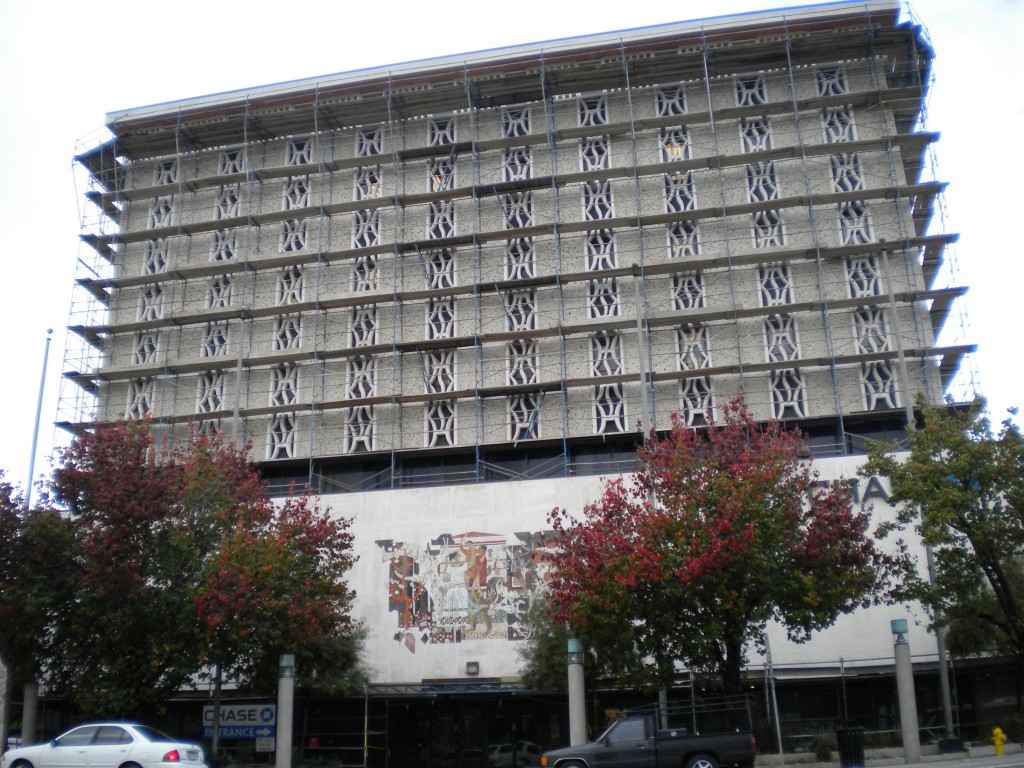 Friday’s column brings the news that the netting over the six-story Chase Bank in downtown Pomona is gone after two years (!). The picture above was shot by me on Thursday; the picture below was shot in late 2010 by my colleague Jennifer Cappuccio Maher.

After that news comes briefs from around Pomona, a few restaurant notes and reaction from two prominent Claremont women about the lack of women on the March City Council ballot. 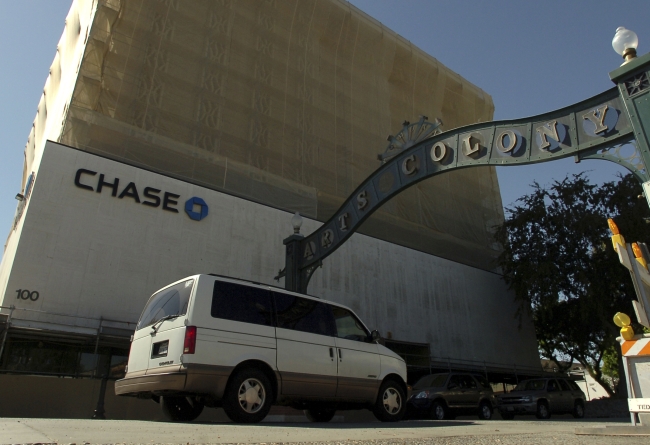 Wednesday’s column has all the latest (and all the greatest) about our friends on the Upland City Council. 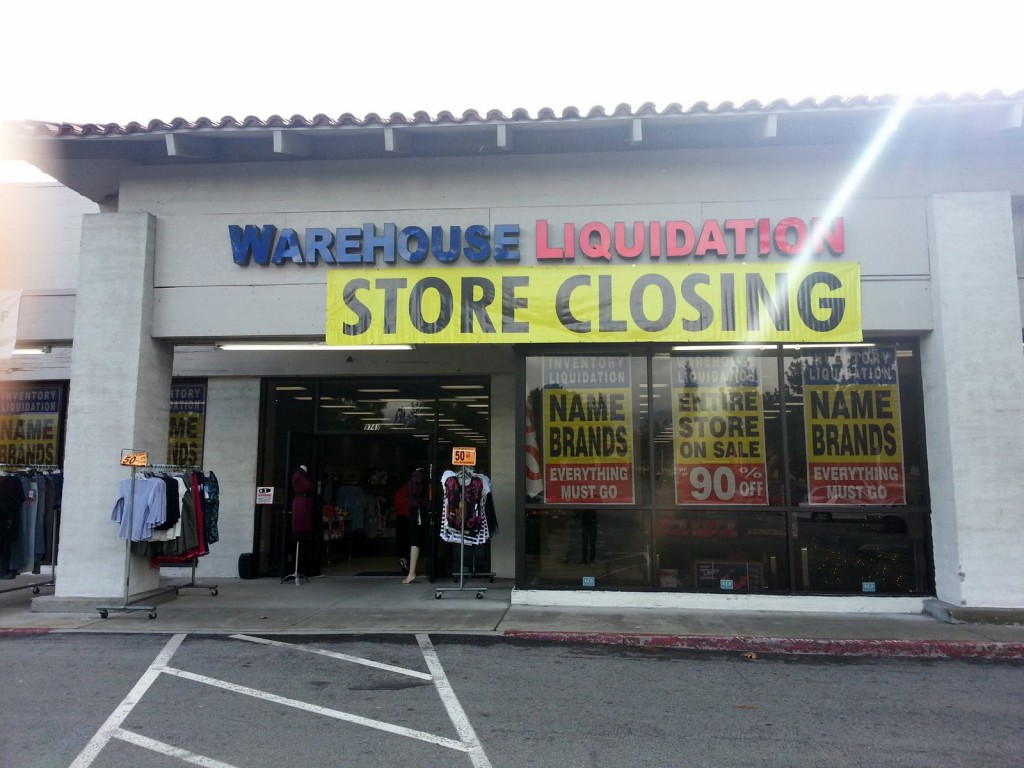 How bad is the economy? Even stores devoted to liquidation are closing. Everything must go from the everything-must-go store at Base Line and Archibald in Rancho Cucamonga. Reader Andy shot the photo and says his first reaction was a startled, “Is the liquidation store liquidating itself?” 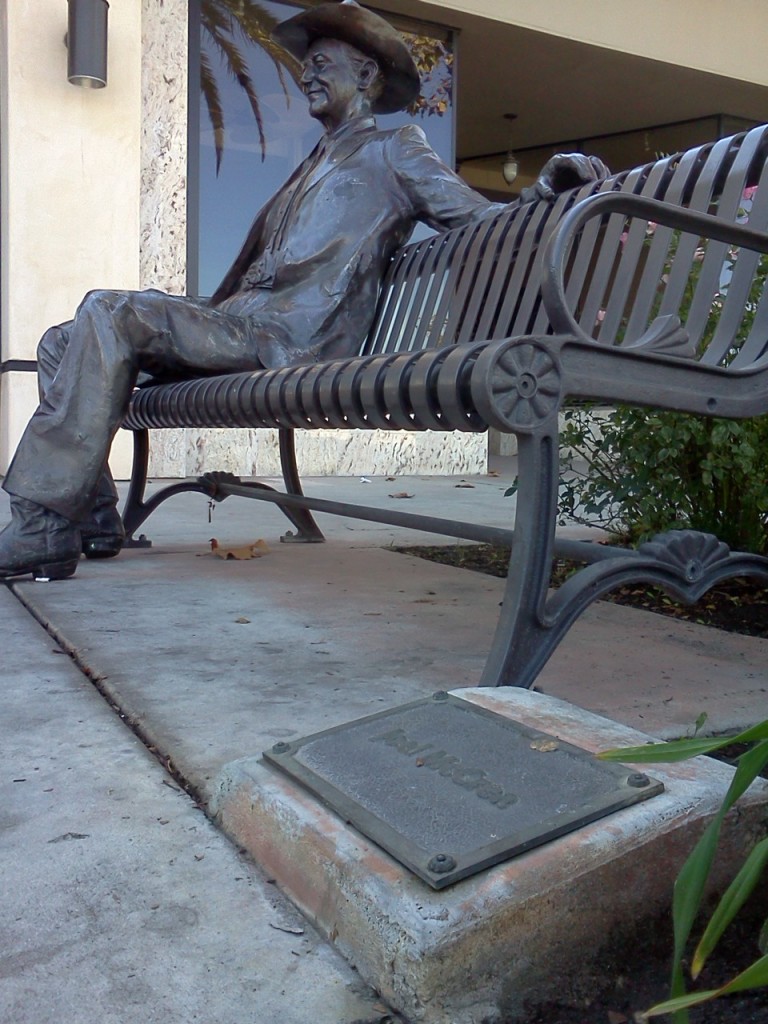 On a recent visit to Camarillo’s Old Town, I came across this life-sized bronze of actor Joel McCrea, a  longtime area resident and benefactor prior to his 1990 death. Recollecting that McCrea attended Pomona College, I took a photo. A check of his Wikipedia page confirms that McCrea, a South Pasadena native, did attend the school:

“McCrea graduated from Hollywood High School and then Pomona College (class of 1928), where he had acted on stage and took courses in drama and public speaking, and appeared regularly at the Pasadena Playhouse. Even as a high school student, he was working as a stunt double and held horses for cowboy stars William S. Hart and Tom Mix. He worked as an extra, stunt man and bit player from 1927 to 1928, when he signed a contract with MGM, where he was cast in a major role in The Jazz Age (1929), and got his first leading role that same year, in The Silver Horde.”

He’s most famous for starring roles in “Sullivan’s Travels,” “The Palm Beach Story,” “The More the Merrier,” “Foreign Correspondent,” “The Virginian” and “Ride the High Country.”