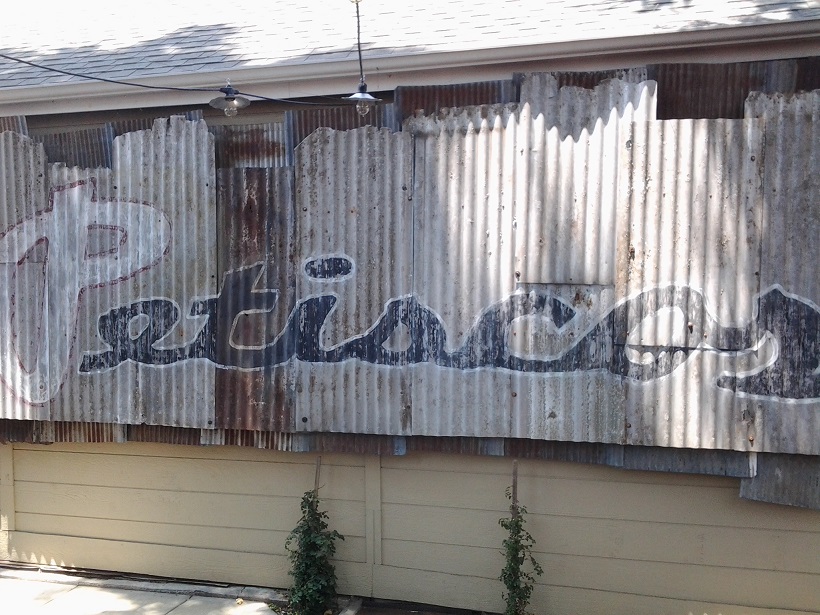 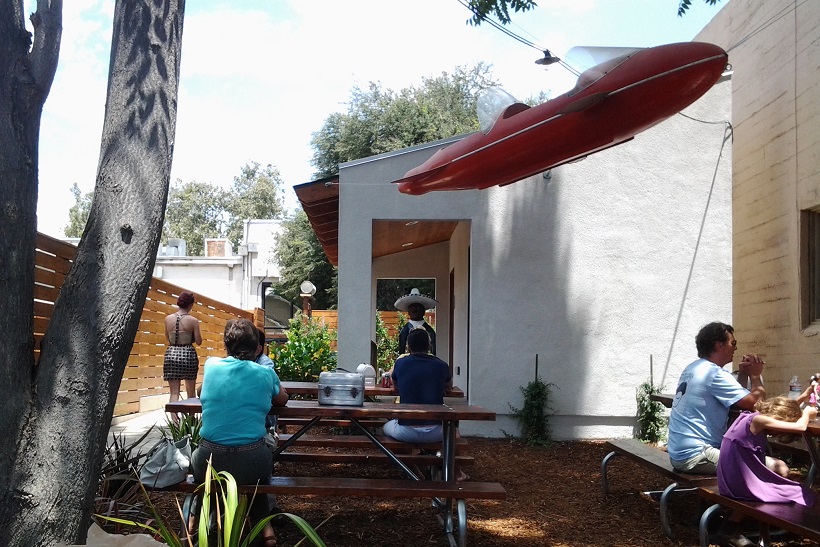 Occupying a tiny white house dating to the 19th century, when it was a railroad ticket office, and in more recent years home to Shrimps and Village Attic, Petiscos opened June 3. Directly across the street from the Claremont Depot, it’s the third venture by John Solana, the man behind Back Abbey and Union on Yale, which revolutionized dining in Claremont.

This one is a taco stand, the house serving as kitchen, and a fenced area behind holding picnic tables for dining, napkins in metal lunchboxes at each table. Restrooms are in the back and a plane from a kiddie ride is suspended in the air by cables. I don’t know why, but it’s cute, which might be reason enough.

The menu is simple: tacos, tortas and grilled corn, with beer, wine and sodas. No salads or sides. Tacos are $4 to $8, tortas are $8.

I’ve eaten here twice so far, both times with friends, and have had almost all the tacos: pork, beef, chicken, snapper and halibut. I’d order any of them again, with the pork, garnished with a slice of pineapple, my favorite. (Halibut and pork are pictured below.) A friend who got the veggie tacos (black beans, potatoes, jicama, onions, eggplant, zucchini and chiles, pictured at bottom) said the potatoes remind her of tacos she’s had in Monterrey, Mexico.

Petiscos is a rare casual eatery in the Village, although, befitting its name (which means “appetizers”), the tacos probably won’t fill you up, and you might find them a little pricey. But then, they use quality ingredients, in chef-driven recipes. Friends wish there were side dishes, like a salad (if you’re a vegetarian, all you can get is the veggie tacos and corn).

“It’s a fun atmosphere. I like the outdoor seating. This is my second time here and I’ll be back,” one said. “Don’t come with a big appetite. It can put a damper on an evening if you leave hungry,” another said.

I suppose if you leave hungry, you can always head to Back Abbey or Union on Yale. 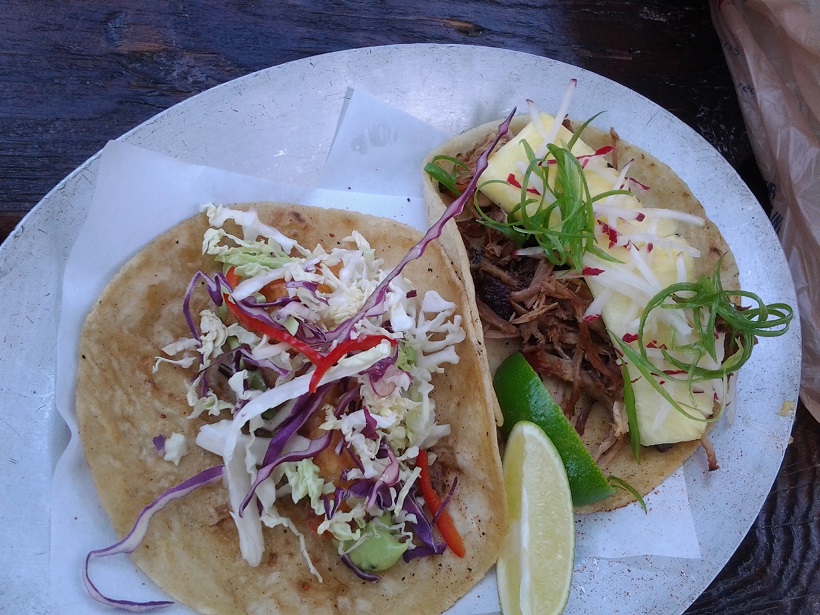 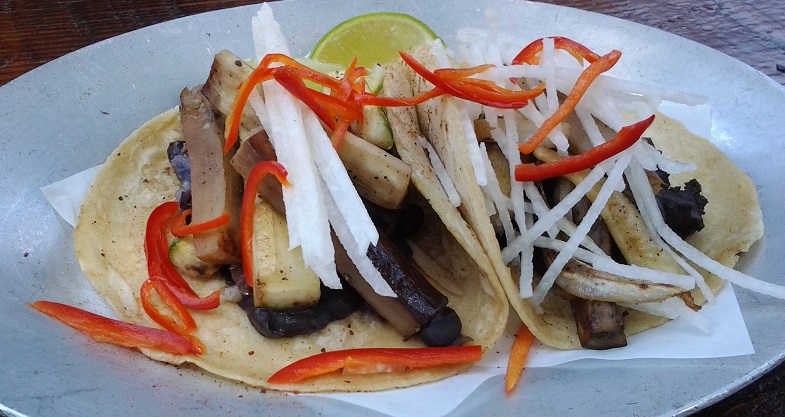 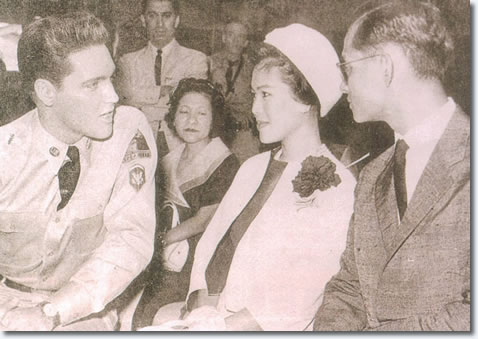 Above, Elvis Presley meets the queen and king of Thailand in 1960 during the filming of “G.I. Blues.”

The king and queen of Thailand visited the United States in 1960, a vacation that began with a week seeing the sights in Southern California before turning into an official state visit. They flew into Ontario International Airport and stayed, believe it or not, at a private residence in La Verne, with much of their retinue lodging at the Uplander motel in Upland. The story is in my Wednesday column. 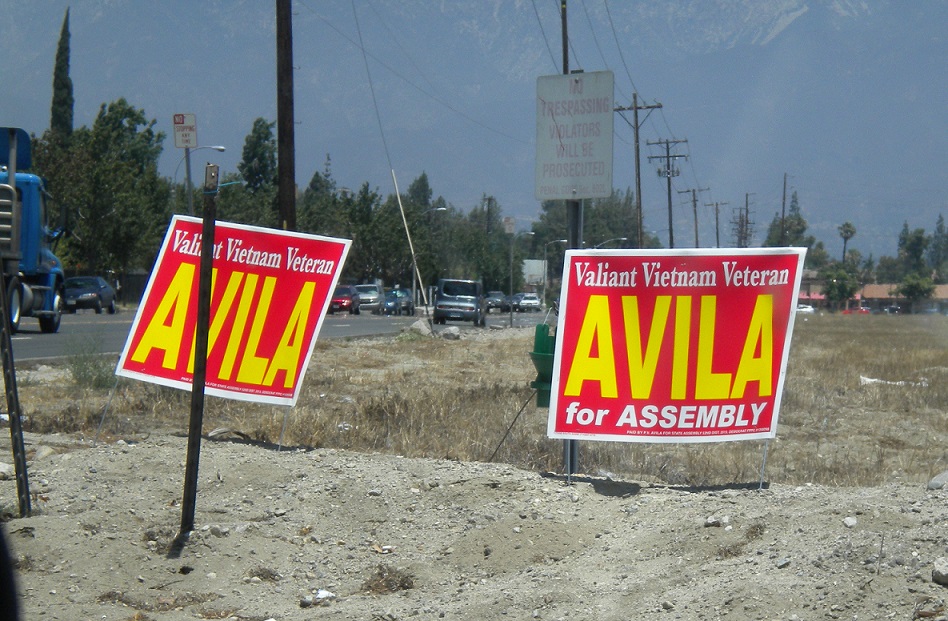 He’s running for Assembly in the June 23 special election primary, and Paul Vincent Avila, who was elected to the Ontario City Council in 2012 without a campaign, this time is springing for signs.

“Valiant Vietnam Veteran,” they say, somewhat poetically. Note that the one on the right says he’s running for Assembly while the other doesn’t mention an office, thereby allowing the perennial candidate for everything to reuse them for his next campaign, which may begin any day now. 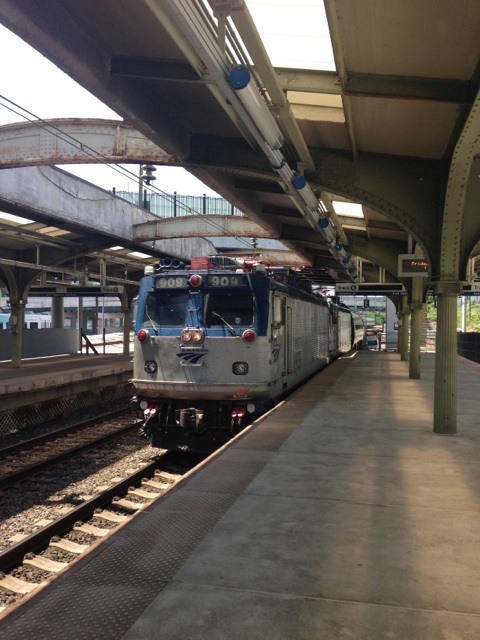 John Evans shares a photo of Train 909 traveling from Baltimore to New York City, shot by his daughter, Jessica Guzman of Rancho Cucamonga. He jokes: “Now arriving, train 909 to Anaheim, Azusa and Cucamonga!” She was waiting for the next train.

I was immediately put in mind of the Beatles song “One After 909.” 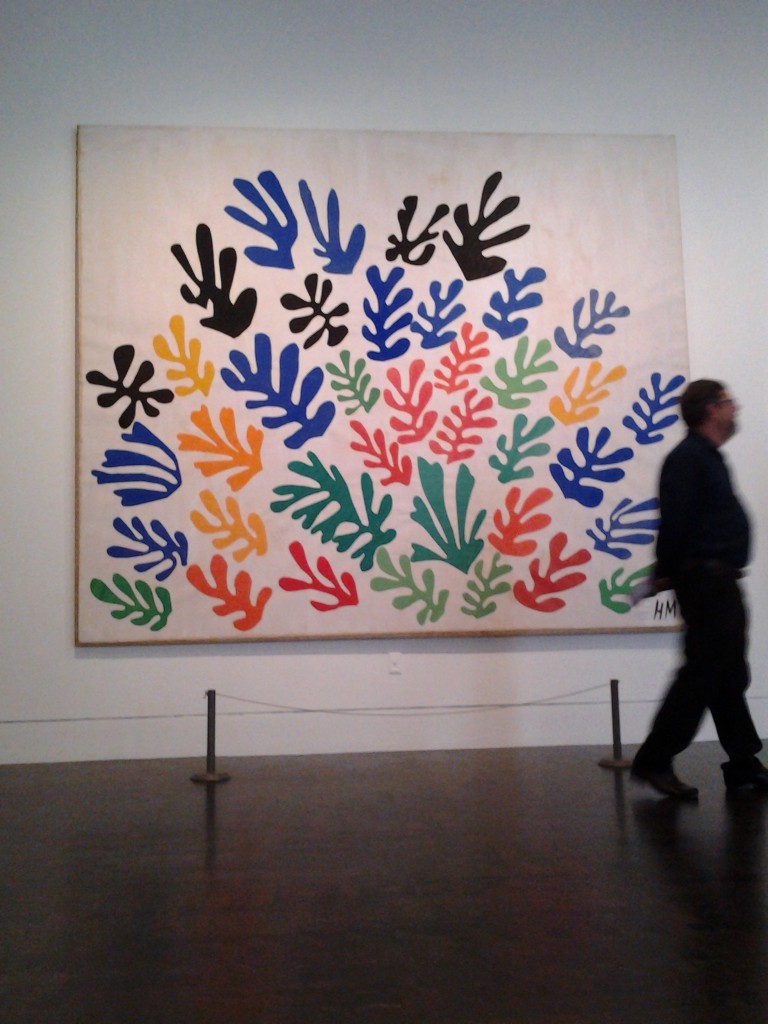 Above, “La Gerbe (The Sheaf)” by Matisse at LACMA.

You can keep your baseball doubleheaders. I took in two museums in one day, the Hammer and LACMA, and both were free, thanks to a Bank of America deal offering free admission to certain museums the first weekend of the month for customers. Naturally I did the whole thing on public transit. The most expensive thing I did that day was a $10.50 lunch. You can read all about this outing in Sunday’s column.

Friday’s column recaps one of the sillier stories I’ve heard, involving an ingenious traffic stop in Pomona of a few decades ago. I also have some cinematic news and share a comment from a reader who only now discovered me. 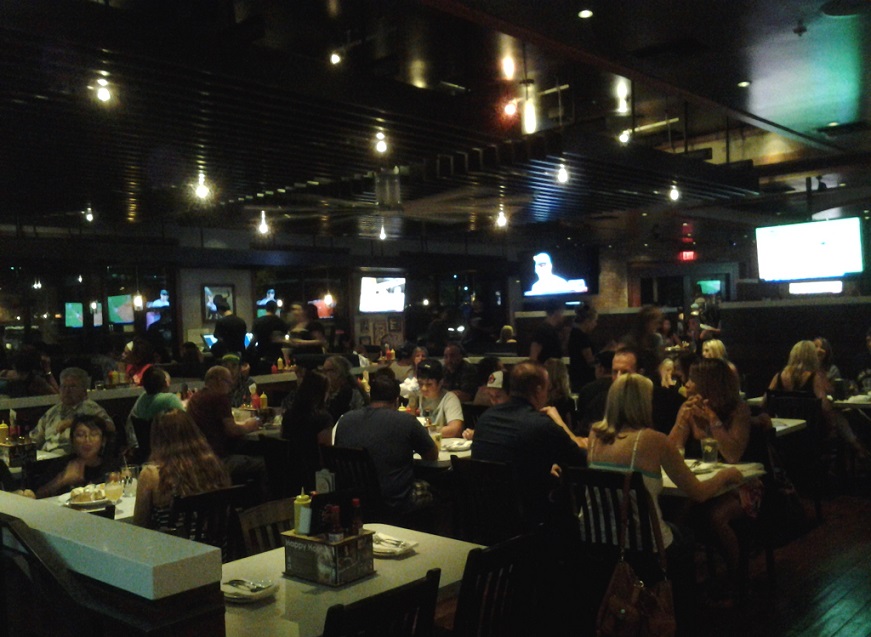 In proof the Inland Valley is getting hipper, or more accurately less unhip, Rancho Cucamonga is now home to the sixth location of a rising high-end burger chain. Slater’s signature ingredient is bacon, its 50/50 burger being half-bacon, half-beef, and they have 100 beers on tap.

Replacing Harry’s Pacific Grill, Slater’s opened July 1 and people discovered it quickly. A friend and I showed up at 6:30 p.m. for dinner midweek and the stated wait was 60 to 75 minutes. Thankfully there’s a Starbucks next door, which is likely to see booming business from people cooling their heels. They’ll text you when it’s your turn, and it was indeed 75 minutes before it was.

The interior is much as I remember it from the sedate Harry’s, heavy on the wood and with its own bar. They’ve added multiple TVs, all tuned to sports, albeit with the sound off, or at least overwhelmed by the classic rock blasting from the sound system and the dull roar from the couple of hundred people inside.

We had an appetizer platter ($6.45, below) of onion rings (a bit greasy, but okay) and sweet potato fries (very good) and two sandwiches ($9 each): a 50/50 for me (bottom), a veggie burger for my friend. Counter-style, you can fill out a slip to choose your patty, bun, cheese, condiments, etc. An indecisive fellow, I’d also rather leave the choices of what goes well together to the kitchen professionals, yet I decided to build my own this time.

The veggie burger was declared “pretty wonderful,” with actual vegetables (black beans, most notably) visible. “I would so get that again,” my friend said. The buns are especially good, the brioche and the honey wheat, being flavorful and substantial.

My 50/50 was fine, but as you’d expect a burger made half of bacon to be, saltier than a typical burger. By the end I was a little tired of it. It was gimmicky, although less so than the chain’s “burger of the month” for July, which is an all-bacon patty, topped with bacon, with bacon dressing, bacon cheese and bacon pretzel bun, plus a fried egg. Maybe they’ll sell you a pancake as a side.

I’m not sure I’d get the 50/50 again, but I would try something else, maybe one of the standard burgers where they’ve already made the choices, or one of the non-burger options. The desserts and milkshakes sound intriguing too. (I might have ordered a shake but the restaurant was chilly.)

Service was attentive, with multiple people checking on us multiple times. There was a glitch on the bill where they tried charging me 50 cents each for condiments that were supposed to be free, but the bill was corrected.

Worth trying to see what the fuss is about, but you might want to arrive at an off-hour. And it helps if you like Starbucks. 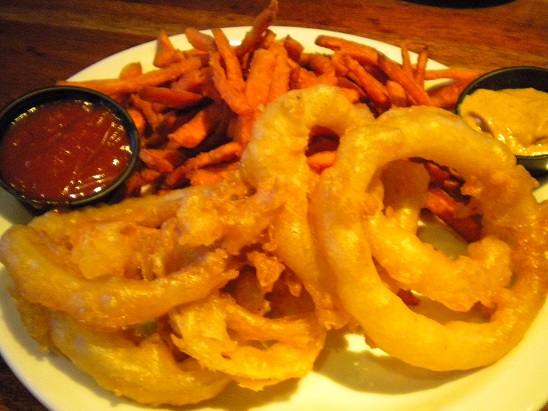 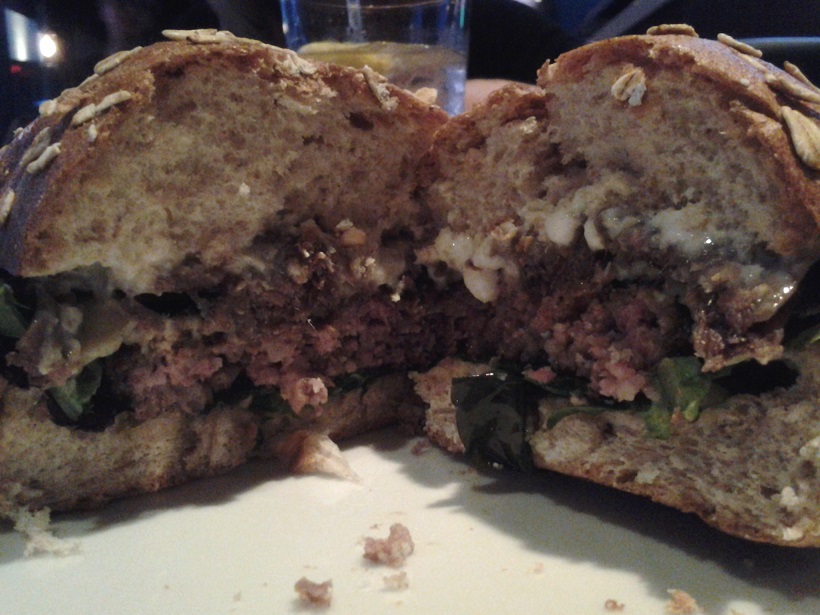 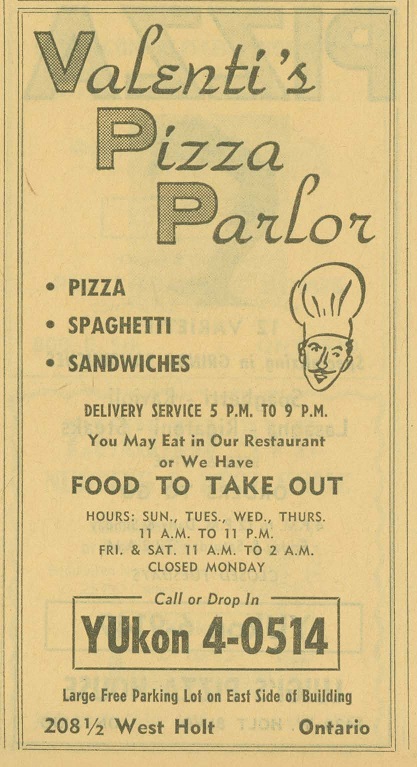 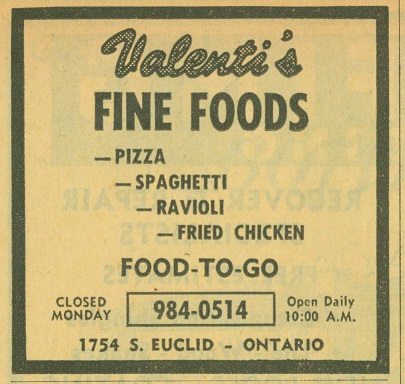 While little of consequence occurred at Monday’s Upland City Council meeting, that’s not the sort of thing to deter me. Ice cream trucks, cat hoarders and the alleged offer of millions of dollars by a rich, if possibly nonexistent, Indonesian spiritual leader all came up during public comment. And then there was my pre-meeting research into the Upland of 1960.

You can read my column here. And after that description, why wouldn’t you?