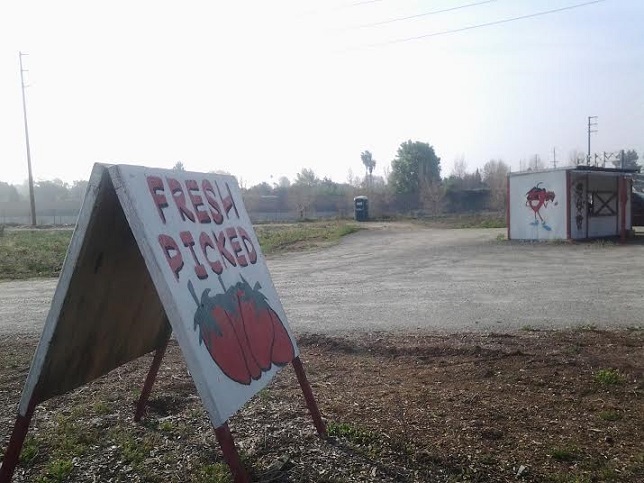 A former strawberry patch in Claremont, eyed for development for years, is now slated for 95 townhomes, my colleague Liset Marquez reports.

The site at Base Line Road and Towne Avenue is easy to be conflicted about. A KCET commentary by Pomona College environmental analysis professor Char Miller last month expressed mixed feelings: Good to have infill housing by a freeway, sad to have an agricultural remnant depart.

“The farm has fallen victim to a post-recession land rush that’s in the process of converting a number of empty lots in Claremont. Six developments, totaling nearly 700 new housing units, are underway,” Miller writes.

I stopped by one morning last week to take a photo and was surprised to find the stand still in operation. While the produce on view — including strawberries — may be “fresh picked,” the picking occurred elsewhere. Nothing is grown on that land anymore.

* Update: The council, on a 3-2 vote Feb. 25, rezoned the property to allow residential uses only, rather than residential and commercial. The townhome developer promised that the strawberry patch would be memorialized in a piece of public art.

“It was the last agricultural parcel in the city,” Councilman Sam Pedroza told me later. “We were an agricultural city and now we kind of officially got away from that…There were a lot of long faces.”