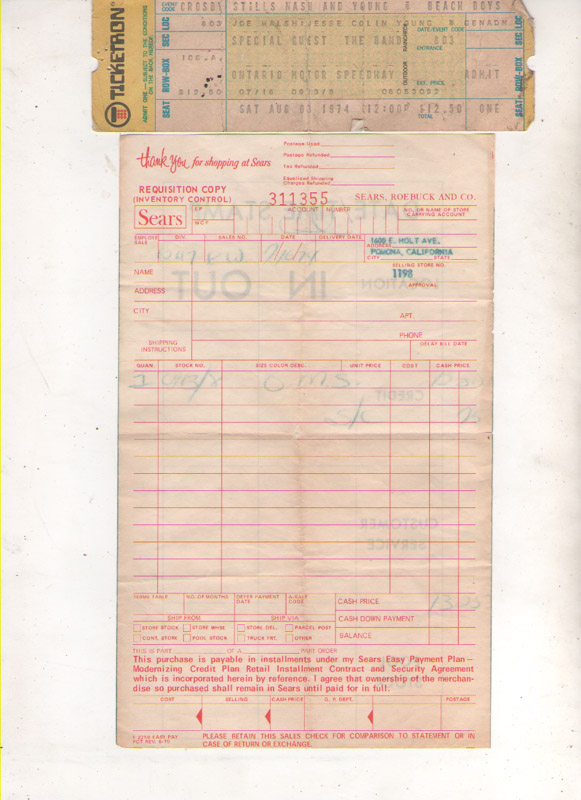 Reader Richard Nunez of Pomona reminds us that after the April 6, 1974 California Jam concert at Ontario Motor Speedway, another mega-concert was planned for that Aug. 3: Summer Jam West.

he bill: Crosby, Stills, Nash and Young and the Beach Boys, plus Joe Walsh and Jesse Colin Young, with “special guest” The Band. What a show that would have been.

Evidently ticket sales were soft and the show was canceled. It was CSNY’s only L.A.-area date in their summer tour. A few days later, roughly the same lineup appeared in New York and drew a reported 75,000.

“I kept the ticket instead of getting my money back,” big spender Nunez says. “Now that would have been a great time. You should have been there lol.”

Although there was talk of more concerts at the speedway after Cal Jam, I don’t know that any took place until Cal Jam II on March 18, 1978. 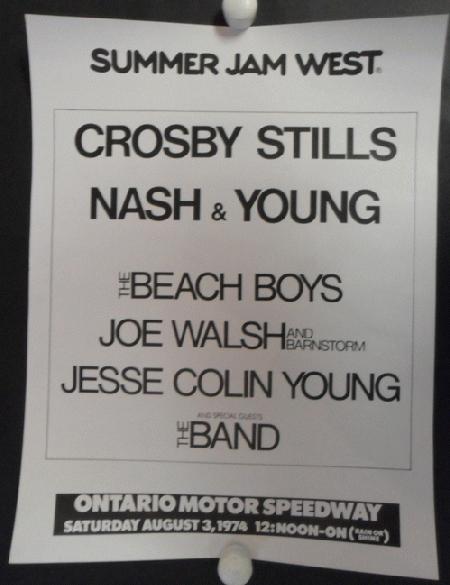 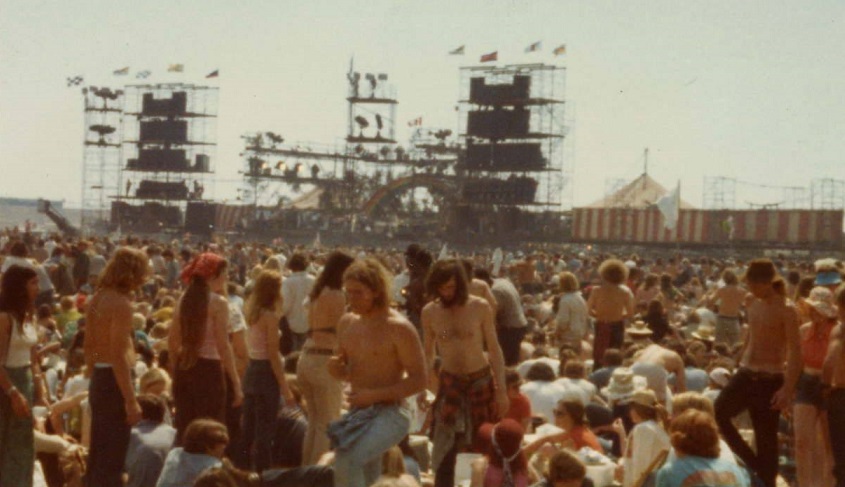 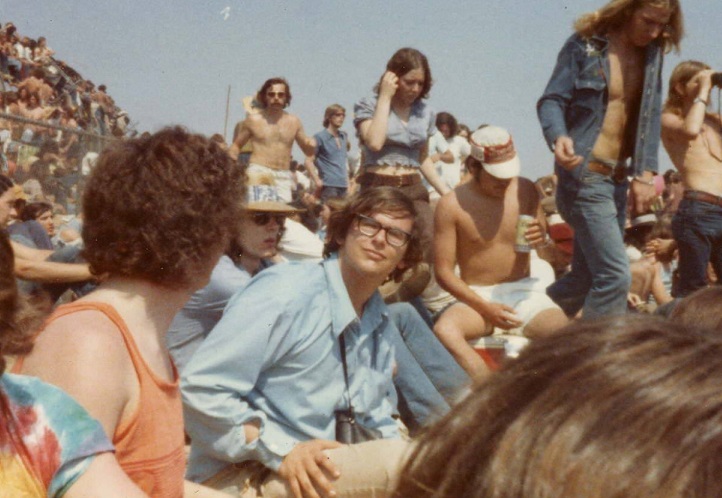 California Jam, a rock festival that took place April 6, 1974, at Ontario Motor Speedway, drew 200,000 people. My Sunday column hits some of the high points. Allen Pamplin of the California Jam Fan Club on Facebook sent me multiple photos. Here are 10. The two above originally came from Alan Lancendorfer. 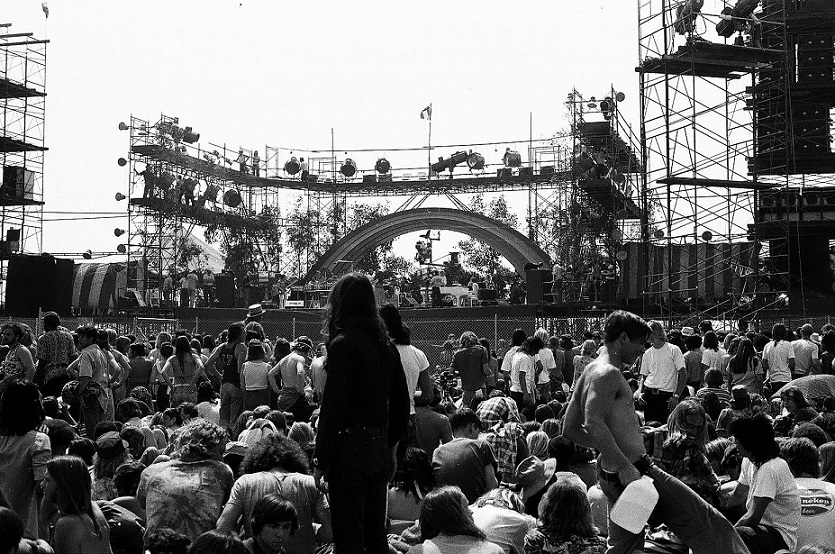 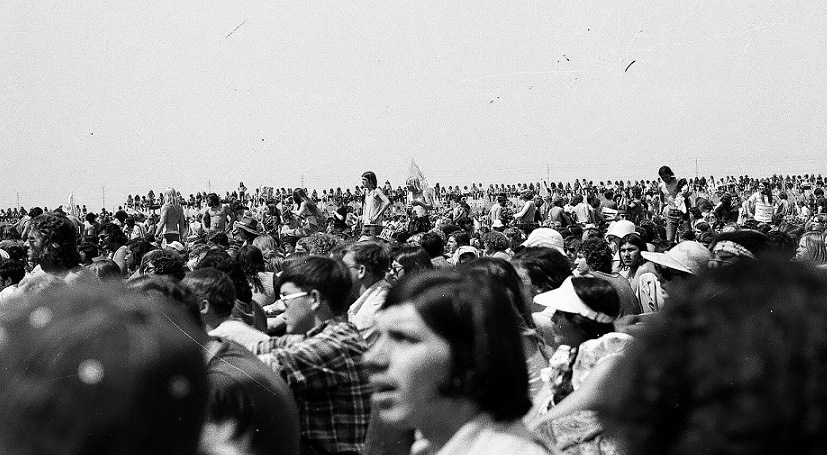 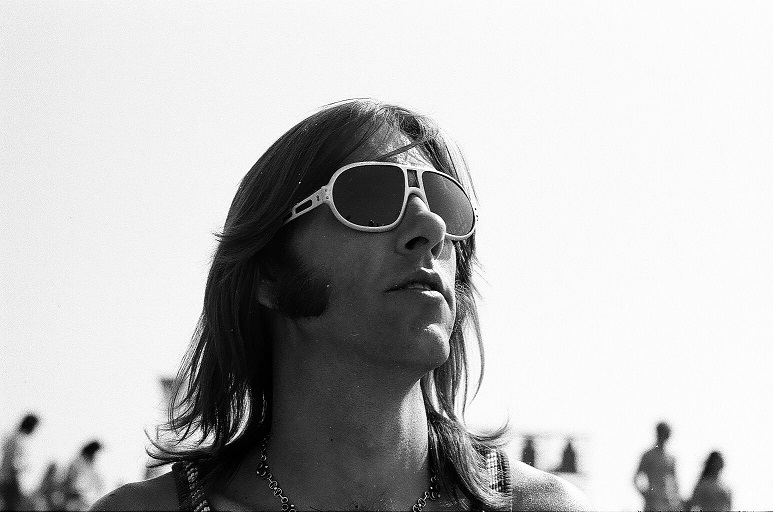 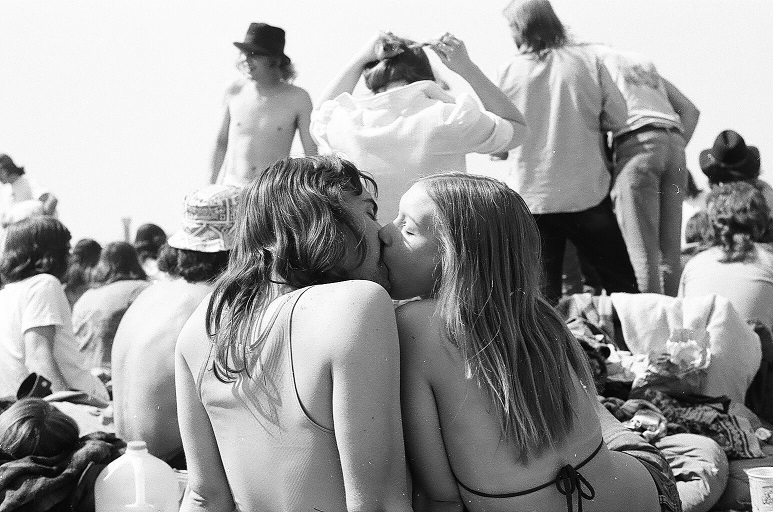 The above four are uncredited. The bottom four were contributed by promoter and emcee Don Branker. Rare Earth, the day’s first band, is performing in the next to last image. A roadie adjusts a microphone in the final image. 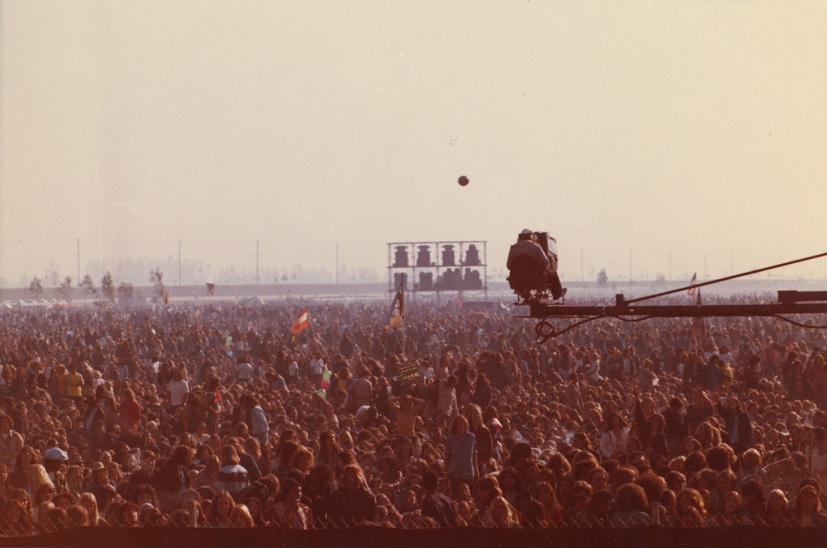 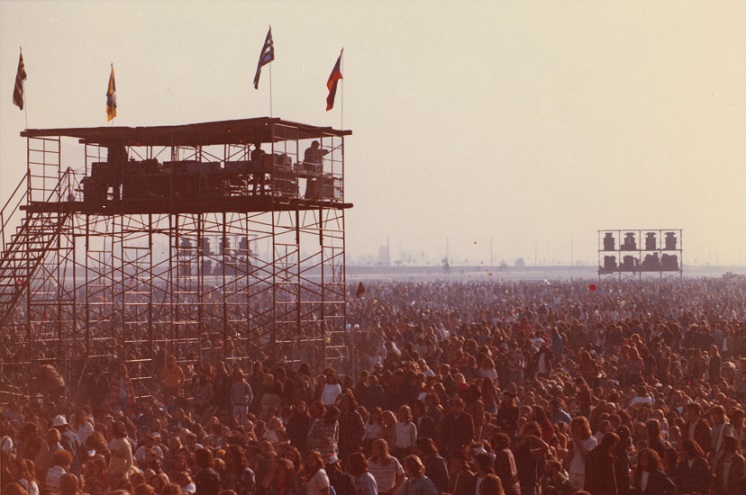 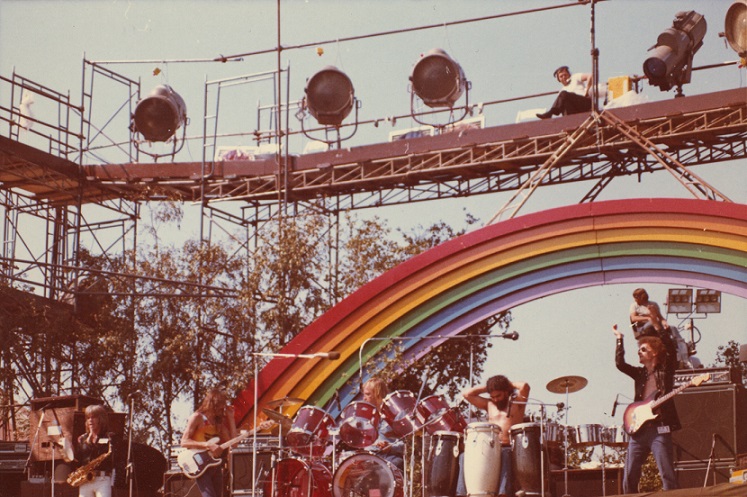 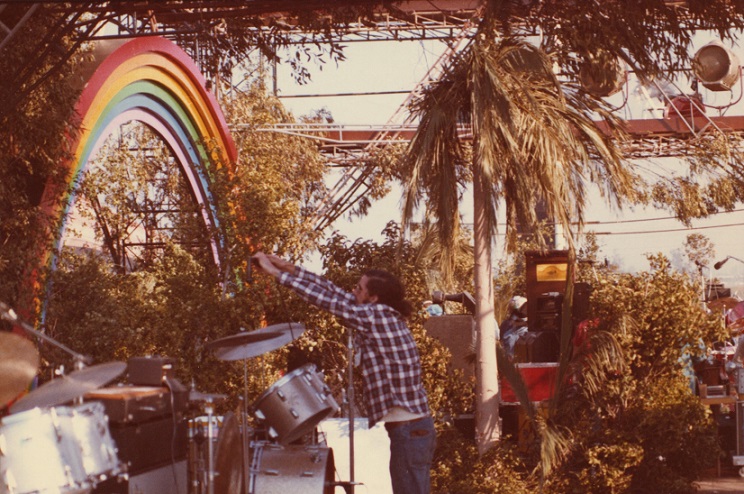 I had to weigh the benefits vs. the cost of flying from ONT before purchasing my ticket to Austin. An unexpected benefit: the in-flight announcements on Southwest. And Austin itself has one of the best airports I’ve been to. Following that come some cultural items and one about upgrades to the Ontario library’s children’s room. All of this is in Friday’s column. 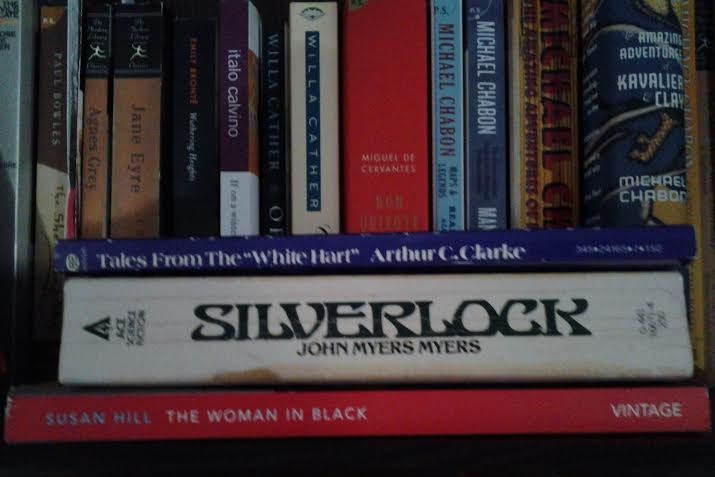 Only a three-book month here. Is that better or worse than a three dog night? Regardless, all three of my reads last month had significance for me.

“Silverlock” I’ve owned since the early 1980s but never got around to reading. For one thing, it’s 500 pages; for another, the hype that helped sell it — separate introductions by SF heavyweights Poul Anderson, Larry Niven and Jerry Pournelle — also inhibited actually reading the thing. “You’ll get drunk on ‘Silverlock,'” “an odyssey of the human spirit,” etc., etc. I could never bring myself to read it, yet I could never bring myself to sell it either.

Now that I’m back to taking my bookshelves seriously, I read it, and you know, “Silverlock” was darned good, a picaresque adventure in the Commonwealth of Letters in which nearly every character is taken from literature or legend: Don Quixote, Paul Bunyan, Robin Hood, Leatherstocking, the Green Knight, and dozens more. Great fun, and recommended if you’re well read, or if like me you can fake it.

That book consumed nearly four weeks. I managed to squeeze in two short books on vacation, a collection of scientific shaggy dog stories by Clarke, told by a tall-tale spinner in a London pub, and Hill’s Gothic horror novel, set in England, from 1992. I liked both of those. (The latter was made into a slightly creepy, slightly silly movie in 2012.)

They meant a little more to me because in London two years ago I’d stumbled across a White Hart pub in the vicinity of the one Clarke frequented; research shows that this one is modern and Clarke’s hangout was really named the White Horse, but no matter, I wanted to read the book ever since. Hill’s book I bought during that trip at Foyle’s; I used the receipt as my bookmark. Happy sigh.

Clarke’s book was bought used at a Bookmaster in Arizona some six years ago, and “Silverlock” came from a used bookstore of my youth, the Double R Book Nook in Olney, Ill.

All three books have a color in their title, and I have so many more of these that April looks likely to have more “color books.” I’m wrapping up a yellow and have started a green, with a red, a blue and an amber in the wings, and a white, a black, a gold, another blue and another green probably out of reach unless April has 60 days.

Of my two acquisitions this month, the first was a birthday gift and the second was bought at BookPeople in Austin, my first book purchase of 2014. I’m trying to cut down.

What have you been reading? And has anyone read, or even heard of, “Silverlock”? It’s kind of a cult classic, hence the hard-sell introductions in my 1980 edition, but deserves to be better known.

Next month: a riot of color. 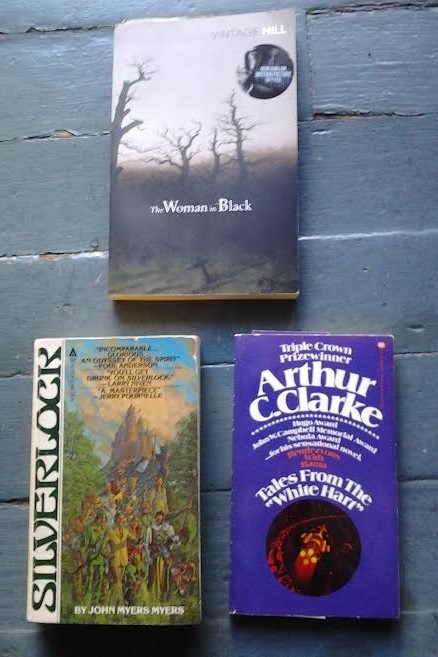 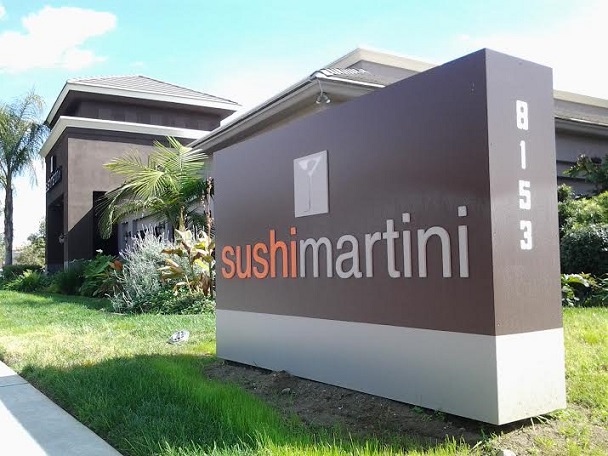 A former Italian restaurant that went through several incarnations (Spaghetti Eddie’s and Cucina Italiana among them) near Foothill and Haven is now reimagined as a Japanese restaurant and proving successful since its opening in January.

A friend and I had lunch there a few weeks back. The interior is casual but slightly swank with modern decor and hardwood floors. There’s a dining room with sushi bar, tables and booths and a lounge. Bottled beer, wine, sake and cocktails are offered.

He had a combo of chicken teriyaki and vegetable tempura (bottom) and liked it; I had the all you can eat sushi ($20). After a salad and miso soup, I had seven pieces of nigiri sushi and a cut roll, adding up to more than $20 worth of food. Below, left to right, is red clam, squid and tuna. I also had salmon, shrimp, mackerel, scallop and a salmon skin cut roll, one of my standbys, and a good version too. Some say the specialty rolls are better than the nigiri, but I rarely order those.

This was not the valley’s best sushi, but it was good enough, I’d rate it higher than nearby Omakase and Ken’s, and the deal was priced well. The atmosphere was comfortable and the service friendly. In other words, I would return. 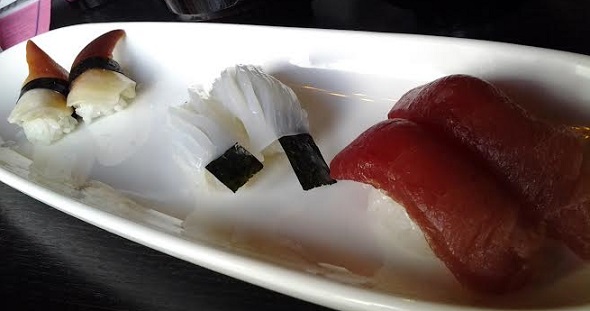 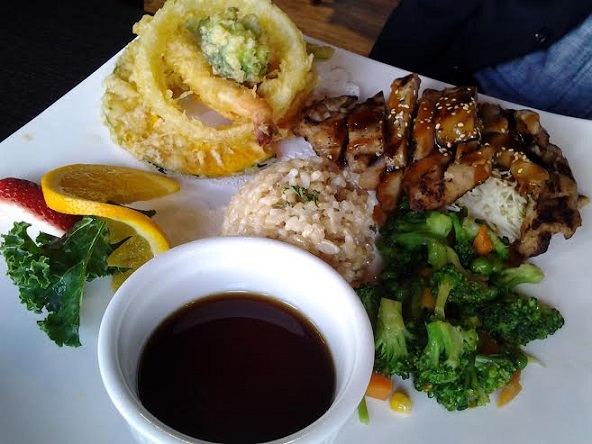 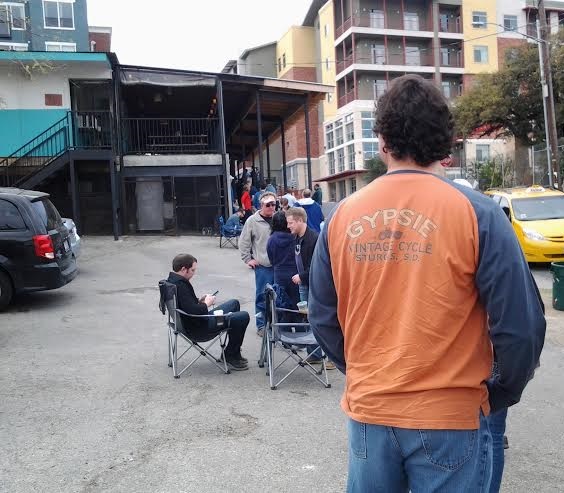 Wednesday’s column is about my vacation last week in Austin, Texas. Here are a few photos to illustrate moments from my column. Above, the line outside Franklin Barbecue from my place in line. An equal number of people ended up behind me. 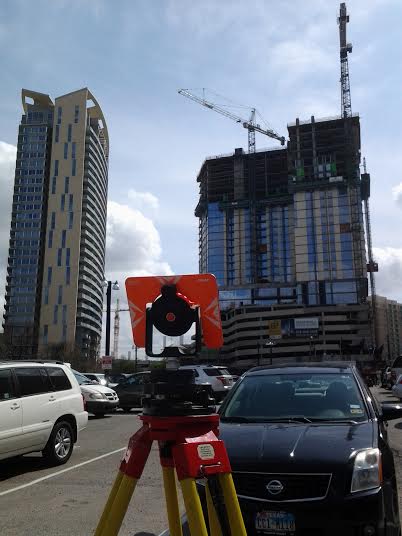 Above, a piece of surveying equipment seems to watch two construction cranes at work, a sign of the city’s building boom, especially by the waterfront. Below, a ghost bike is part of a memorial to those killed by a motorist during the South by Southwest music festival. 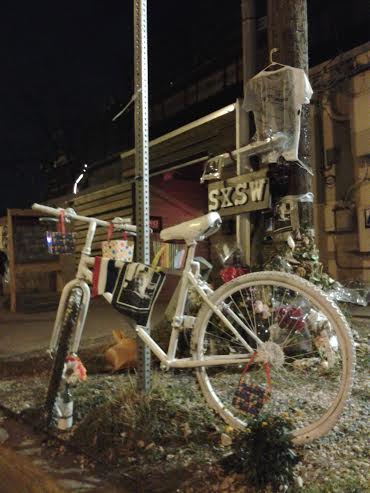 Below, a Frito pie, which is chili, cheese and onions atop a bed of Frito corn chips. Not bad, with the chips more interesting than saltines, but not something I’d order again, I don’t think. 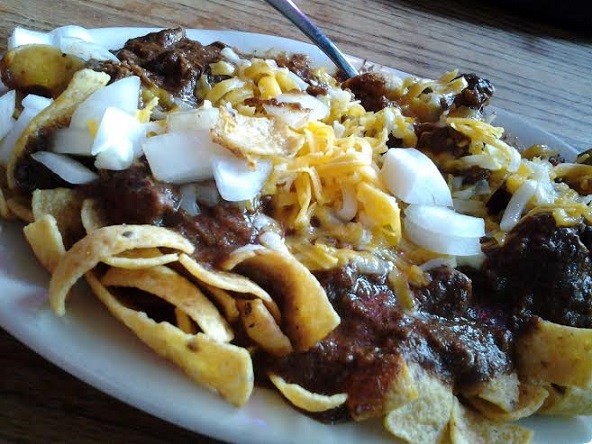 And, lastly, here’s a view of the Congress Bridge bats and the people watching them. 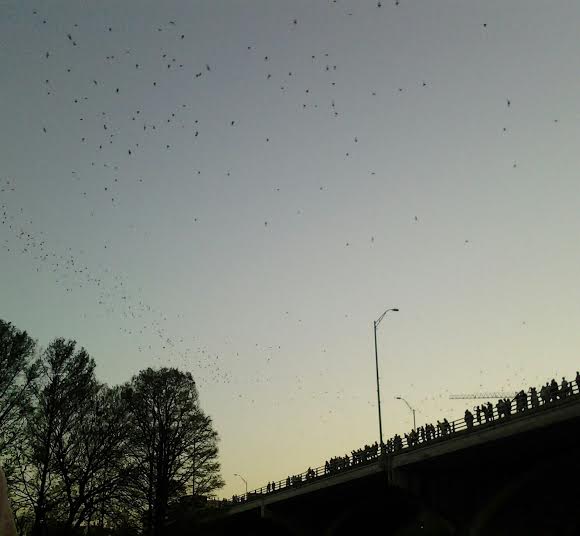 Videos: The animatronic LBJ at the presidential library tells a corny joke (it’s like the Bulletin’s Slice of Wry in oral form) and bats pour out from under the Congress Avenue bridge.