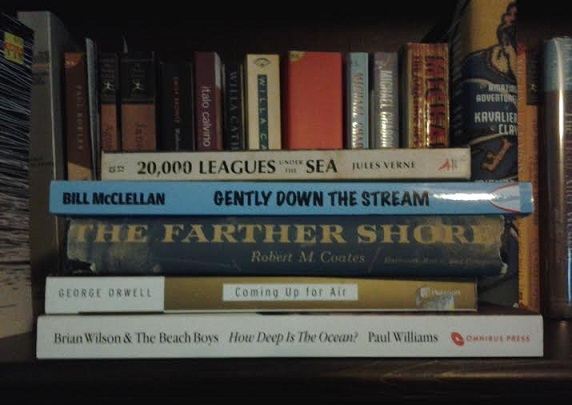 Books read: “Gently Down the Stream,” Bill McClellan; “The Farther Shore,” Robert M. Coates; “20,000 Leagues Under the Sea,” Jules Verne; “Brian Wilson and the Beach Boys: How Deep is the Ocean?” Paul Williams; “Coming Up for Air,” George Orwell.

Ahoy, readers, it’s time for another post about our reading habits of the past month, which in my case all involved water-based titles.

(I came up with a bunch of such “theme” groupings three or four years ago, fresh from having typed up the title of every unread book on my shelves for a master list, and with connections echoing in my brain. I get to them as I can. Turns out there are only 12 months in a year. Who knew?)

“Stream” is a collection by a St. Louis columnist; “Shore” is a 1950s out-of-print novel about a bachelor who really should not marry, but does, with unfortunate results (telegraphed in the first sentence or I wouldn’t bring it up); “Leagues” is, of course, the famous novel about a submarine voyage led by a captain without a country; “Ocean” is a compilation of essays and interviews about the surf group; and “Air” is a novel about a middle-class Englishman who, with prewar jitters, is seized by the notion of escaping the city to his childhood village.

“Shore” came to me in an unusual way that may illustrate the happenstance way we sometimes read. I’d read two short stories by Coates in anthologies edited by my boy Ray Bradbury, loved them, especially “The Hour After Westerly,” which would have made a good “Twilight Zone,” and wanted more. He published two books of stories, it turns out, as well as several novels and a memoir; he was the New Yorker’s art critic for a time. I couldn’t readily find any of his books at used bookstores (yes, yes, no doubt I could find them online, but I wasn’t frantic for them, I just put them on my want list as something to hunt for on book expeditions). The first thing I found was “Shore,” at a St. Louis store maybe four years ago, and decided to buy it — it was only $4 — even though it was a novel. Last year, at Powell’s in Portland, I found one of his story collections and bought it. I almost put “Shore” into my “sell” box, but opened it up and saw the first page involves a guy eating in a diner. So I read it. And it was pretty good.

“Air” was my favorite of the month, though. The narrator at first seems like a dope, a guy strangers tend to call “Fatty” who sells insurance and finds his children a nuisance and his wife a bore, but his mordant sense of humor and realistic view of things set a tone unlike any book I can remember reading. The whole thing was kind of extraordinary. I was led to this book in another odd way, by an extended mention in one of the “33 1/3” books on the Kinks album “Village Green Preservation Society.” Any book similar to one of my favorite albums was likely to be worth seeking out, and it was.

“Leagues” was both fascinating and tedious, as anyone who remembers reading it can tell you. I’d read it as a boy but had meant to reread it ever since “The League of Extraordinary Gentlemen” comics made Nemo seem like an amazing creation. Not surprisingly, much of that is only implied in the original. I’ve owned this copy since elementary school. The others came into my hands more recently: 20 years ago in the case of the Beach Boys’ book, the past five years for the rest.

I should mention, too, that I began and abandoned one book this month: “The Sea” by John Banville. (You can see part of the cover in the photo above.) It was too literary for me. I could have finished it had I chose, but I cut my losses about 40 pages in. A part of me thought I should read it, as the hype proclaims that it won the Man Booker Prize. Then I thought, well, am I making a survey of Man Booker Prize winners? I’ve got a lot of books around the house I want to read more than this. So into the “sell” box it will go.

That’s all from me. How was your May? Let us know what books you’ve been paging through, finishing or abandoning.

Next month: Watergate. Wait, would that have fit in during May? 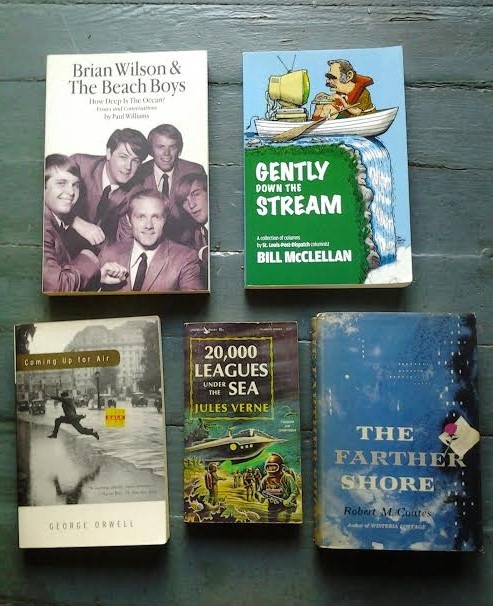