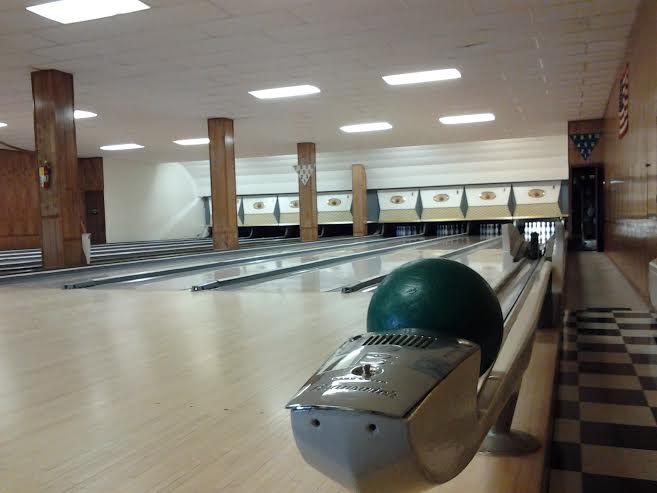 That’s the motto of St. Louis’ Saratoga Lanes, built in 1916 on the second story of a building in suburban Maplewood. Yes, you have to walk upstairs to bowl; there’s a storefront office tenant on the first floor. (Noisy neighbors?)

Once you’re upstairs, you find billiards, a bar and eight lanes that evidently were last remodeled in the mid-1950s. There’s automatic pinsetting and ball return — at least they don’t still employ pinboys — but the ball return is ancient and all scoring must be done by hand, just like the old days. No TV screens, no flashy graphics. Also, the seating is lovably plastic, and they still have ashtrays.

I learned how to keep score from my Dad back in the 1970s, before our town’s lanes implemented electronic scoring. Saratoga’s daytime manager told me that newcomers freak out about the scoring and sometimes stay away for that reason, but he always offers to show people how to do it.

An occasional bowler, I’d been to Saratoga once before and found the place amazing. I returned during my recent visit home. I was the only bowler there that afternoon. My parents watched me bowl three middling games — my scores were 127 to 144 — and my Dad took a video of me bowling a random frame. You can watch that video here.

Saratoga is on the National Register of Historic Places and in 2008 was named the city’s best lanes by Riverfront Times. I’d link to Saratoga’s website, but it’s so minimal it may not have been updated since the 1950s either.