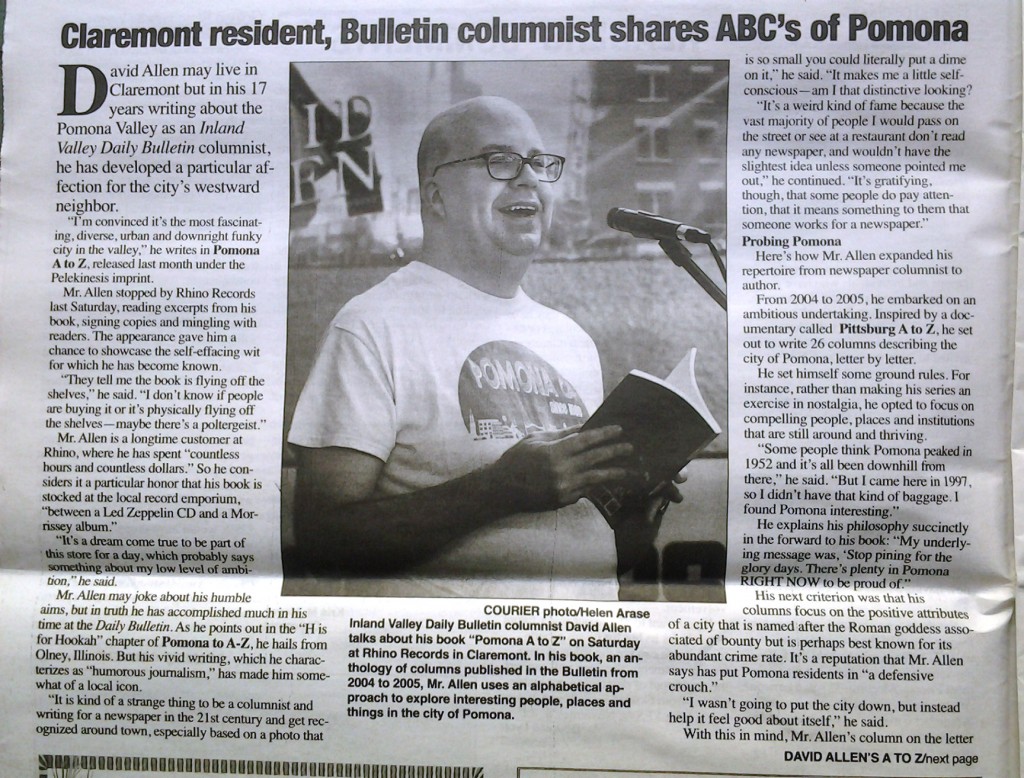 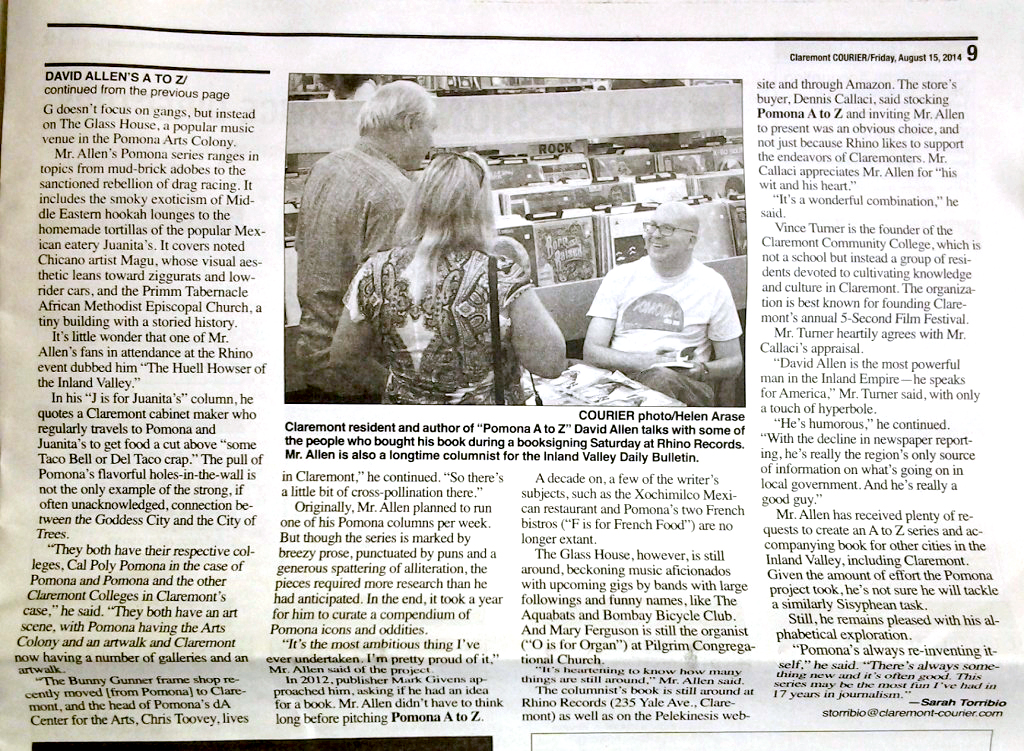 Today marks 40 years since President Nixon announced on live TV that he would step down the next day. I write in Friday’s column about my understanding of Watergate as a child through TV and comics, and what I learned about it this summer through research. You’re encouraged to contribute your own perspective, then and now. 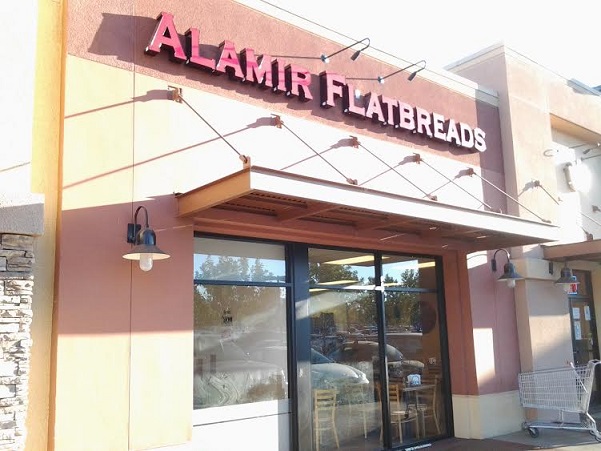 Alamir joined Fattoush in 2013 as Middle Eastern restaurants seeking some synergy from the Super King market, which took over from the former Albertsons below the 10 Freeway and which caters to Middle Easterners. Alamir previously was located in Anaheim.

It’s kind of bare inside, lots of tables and not much else, and was pretty quiet on a recent Wednesday evening. But I was confident because of a reader’s recommendation. Alamir has about two dozen flatbreads, round like pizzas but smaller, lighter and much cheaper.

I had the zaatar and cheese, which is dried thyme, sumac, sesame seeds and olive oil ($2.50) (you read that right). “Is this really 10 inches?” I asked, to make sure I was getting an entree at that price. I was. The version without cheese is a mere $1.75.

After a trip through the pizza oven, the flatbread was done. It looked like a pizza but with a thin, soft, floury crust. (Bottom one in the photo below.) It had a little too much dry spice for my taste, like if you shake on too much oregano, but it tasted good, and I liked the concept and the price. I would get a different flatbread next time, though. My big-spender friend had the chicken chipotle flatbread, which was $6. Showoff. It had a very light sauce, spicy cheese and boneless chicken chunks. A chicken fan, he said he really liked it.

Other varieties include kafta, plain cheese, scrambled egg and cheese, sojouk and kafta. They also have a traditional veggie pizza, calzone, and triangles with spinach or cheese. Most of the items are $6 or less. See the menu here; the website’s out of date, but the menu is fairly current.

A little different, but interesting, and the prices can’t be beat. 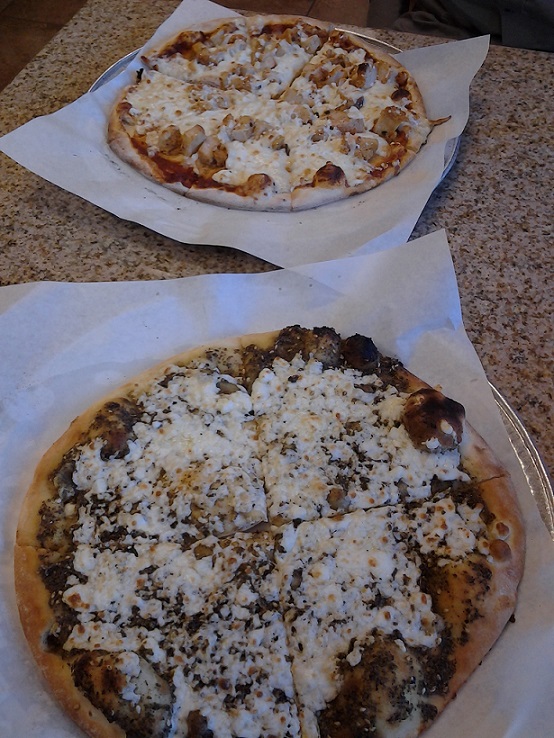 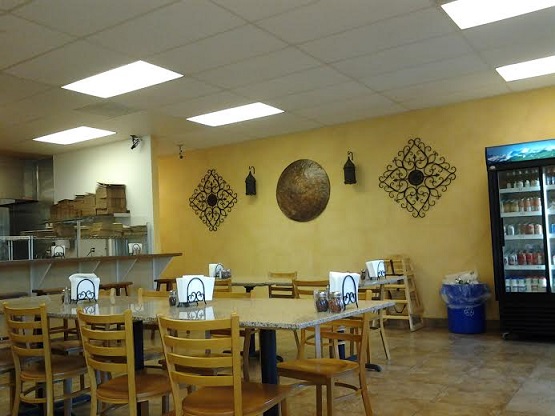 In Wednesday’s column: A thief makes off with the utility bill payment dropbox at Montclair City Hall but doesn’t get much for his effort. Also, more items from Montclair, Culture Corner items from Chino Hills and Pomona, and details of my next three book signings — two of them on Saturday, the next on Aug. 21. 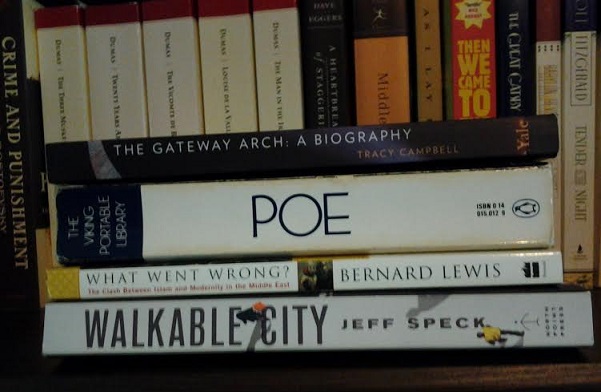 Books read: “Walkable City: How Downtown Can Save America, One Step at a Time,” Jeff Speck; “The Portable Poe,” Philip Van Doren Stern, ed.; “What Went Wrong?: The Clash Between Islam and Modernity in the Middle East,” Bernard Lewis; “The Gateway Arch: A Biography,” Tracy Campbell.

A random month of titles, and like last month more nonfiction than is typical for me. I read a book on how pedestrian (and cyclist) life tends to make towns and cities more pleasant and livable, a fat book of Edgar Allan Poe pieces, a scholarly attempt to explain Middle Eastern history and a sociological, political and architectural look at St. Louis.

“Walkable City”: A chatty exploration, published in 2012, of what makes a downtown work: two-way (and narrow) streets, fewer and more expensive parking spaces, senses of scale and place, bicyclists, pedestrians, lively storefronts, places worth walking to, working neighborhoods as opposed to isolated landmarks (LA’s Disney Hall is criticized), trees, transit and, in a small surprise, awnings.

“Portable Poe”: It’s tough to find a uniformly excellent Poe anthology: Either they’re missing a few great stories, or there are too many weak ones, or they don’t include any of his poetry. What decent Poe book wouldn’t have “The Raven”? Many of them. This one, published in 1945 and totaling, ulp, 666 pages, offers a wide-ranging overview of his every writing mode, except maybe we don’t want an overview if that means we have to wade through his dull, dated essays and articles. Useful in its way, with a good selection of stories and poems both, but more Poe than you probably want.

“What Went Wrong?”: I had hoped for a clear, concise summary of centuries of Middle East history, which admittedly is a lot to expect. Published in 2002, “What Went Wrong” was okay, informative if dry, but for this neophyte, Lewis was so scholarly and history-minded, he didn’t really answer the provocative question in the title. What went wrong? (Subsequently I learned that Lewis favored the invasion of Iraq and may not have been the best person for an even-handed history.)

“Gateway Arch”: Deeply researched but very readable exploration of one of America’s most instantly recognizable monuments, which also happens to be a piece of modernist sculpture. Campbell’s book, published in 2013, explores the three-decade effort to remake the St. Louis riverfront (40 square blocks were leveled), the wrongheaded thinking that separated a tourist attraction from downtown, why once-great St. Louis has faltered — and yet why the Arch is still astonishing.

Not counting three books received as gifts, I’ve bought only three books in 2014 and have read two of them, both this month: “Walkable,” bought in Austin, and “Gateway,” bought in St. Louis. (The third, already underway, will be read in August.)

“Poe” came from a vacation last year, where it was bought at Moe’s in Berkeley, and “Wrong” was purchased at the B&N in Rancho Cucamonga back in 2002 or so, when getting to know more about the Middle East was on our minds. I got bogged down in the (very long) introduction, realized this might not be the book for me and set it aside before recently resurrecting it, for good or bad.

I’ve read the Poe intermittently since last fall (there was overlap with other Poe I read in the interim too), started “Walkable” in March before putting it aside for later and began “Wrong” in May, so this was in part a month of wrapping up a few books in progress. How was your month? Is summer proving to be a good season for reading, or a poor one?

Next month: many slim books. 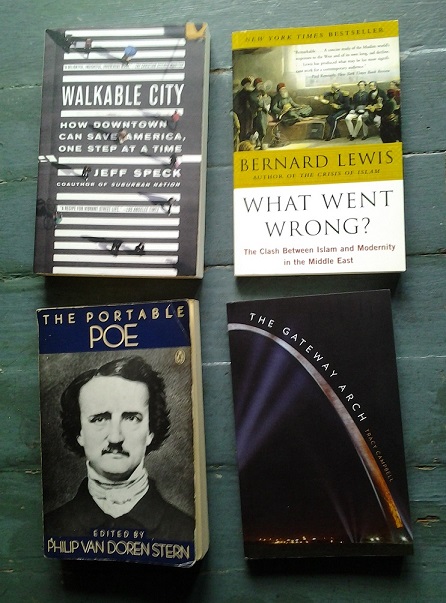 Sunday’s column is about a Navy pilot from Pomona who died 50 years ago Tuesday during a retaliatory air strike for the Gulf of Tonkin skirmish. Researching it was a learning experience: I’d heard of the Gulf of Tonkin incident and resolution but didn’t know much about them. Anyway, it seemed worthwhile to remember Dick Sather a half-century after his death, and I hope you’ll agree.