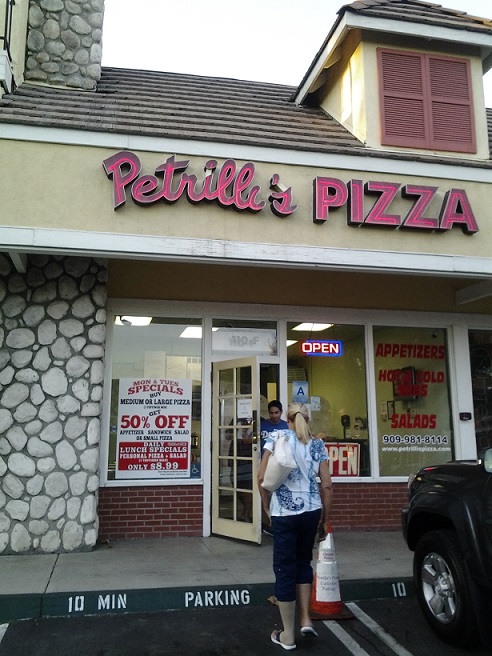 One letter can make a lot of difference. Petrilli’s isn’t Petrillo’s, which is a San Gabriel Valley institution, with locations in San Gabriel and Glendora. But it used to be. The Upland storefront opened as a Petrillo’s circa 2004 but changed a letter the following year. (A close look at the sign hints that the “o” may have been cut in half.) Someone who knows more about Petrillo’s could probably explain, and if so, please account for Mama Petrillo’s in La Verne, Rosemead and Temple City, whose connection to the main operation is nebulous.

Located at the north end of the Dollar Tree and Fresh & Easy center, Petrilli’s is takeout only, except for a lone table. That, a soda case and a TV are about the only adornment. A friend who produces the New Diner blog, and one of his friends, met up with me there recently for dinner and snagged the table.

We ended up getting two pizzas: a medium specialty ($23.75) and a small three-topping veggie with mushrooms, onions and jalapenos ($14), because a small pizza was half-off that night with purchase of a medium or large. The menu has a few sandwiches and salads, and lasagna, but it’s mostly pizza.

The specialty had sausage, mushrooms, pepperoni, salami, onions and green peppers and was enormous. So were the toppings. As my friend said, “Those are some of the biggest pieces of sausage I’ve ever seen,” and I agreed. The medium was cut in squares, not triangles, and encompassed 16 pieces. Two of us ate less than half.

We liked our pizzas, but we weren’t totally sold. The crust was crunchy and a little boring; my friend left all the edges on his plate, piled like chicken bones. It was a heavy pizza, probably double the usual amount of cheese, loaded with toppings, a little hard to pick up and eat, the opposite of the type of pizza I usually get. It was extreme, even a little freakish, like the giant horse at the county fair.

I took home seven pieces and got four more meals out of them. I’ve never had anything quite like Petrilli’s — well, except for my single Petrillo’s experience — and it’s hard to imagine returning. But it’s some people’s favorite pizza, and I won’t fault them for it. 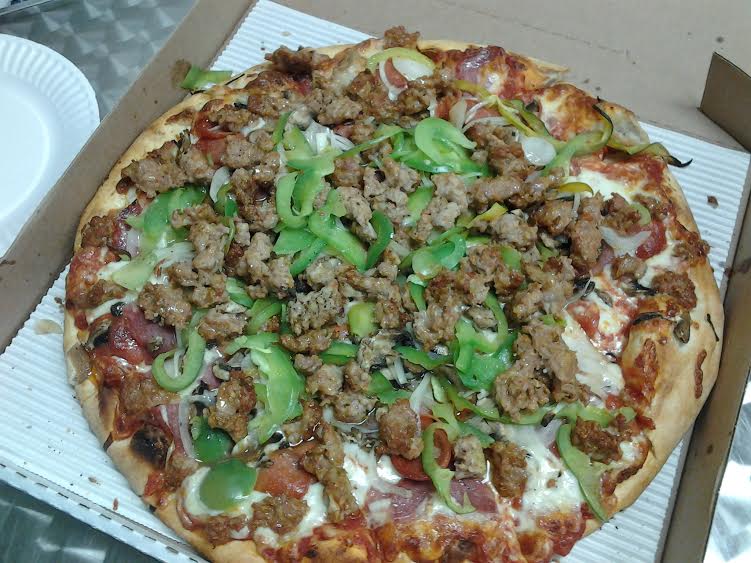 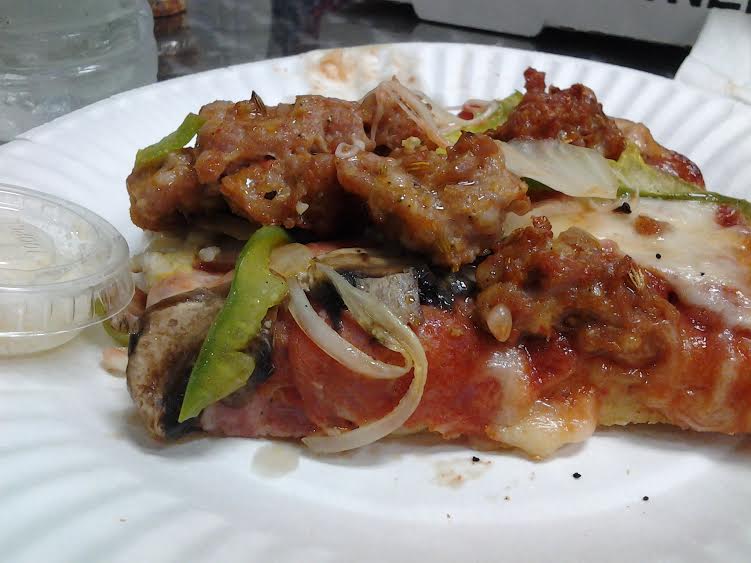