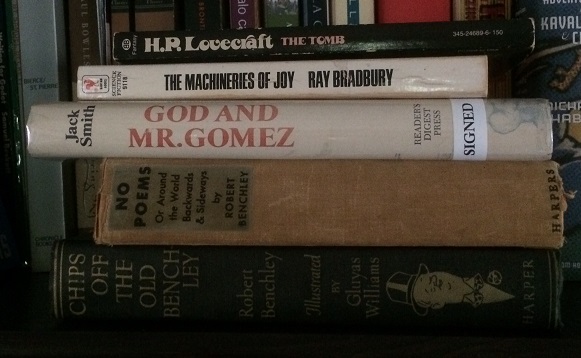 Books read: “The Machineries of Joy,” Ray Bradbury; “Chips Off the Old Benchley” and “No Poems, Or Around the World Backwards and Sideways,” Robert Benchley; “The Tomb and Other Tales,” H.P. Lovecraft; “God and Mr. Gomez,” Jack Smith.

Welcome back, bookworms! (“Thank you, Mr. Allen.”) Time to share what we read in October. I’ll start: Five books, all from favorite authors.

I’ve read a book per year by H.P. Lovecraft for four years now, one by Jack Smith per year for three and the same for Robert Benchley for a couple of years, I think. And Ray Bradbury is, of course, one of my absolute favorites, one whose oeuvre I’ve been rereading; it’d been a year or two since I read anything by him.

“Machineries,” from 1964, is where Bradbury started softening, a process that only picked up momentum from here, alas. Still, it’s got some sharp stories amid the gauziness.

I read Benchley’s “Chips,” a posthumous collection of humorous essays that had been published but uncollected, over a few weeks; it was disappointing. Dusting off my Benchley books, I noticed that “No Poems” had a note inside of the 13 essays I hadn’t read in the slightly shorter British edition that I’d had previously. Why hadn’t I gone ahead and read them when I bought the book three or four years ago? No idea, but I went ahead and read them, completing a second Benchley book this month. The extras weren’t so hot, but the book as a whole is much better than “Chips,” with a lot of prime material.

Lovecraft’s “Tomb” had a lot of marginal material too, as it’s plumped out with some teenage stories and later fragments. But the bulk of the collection is in the Lovecraft mode of atmospheric, slightly purple horror.

Lastly, 1974’s “God and Mr. Gomez” by Smith, the late L.A. Times columnist, is his most famous, telling the story of his and his wife’s decision to commission a Baja vacation home from a man named Romulo Gomez, who is quite the character. People love this book, the only one most people know; my guess is that’s because it hangs together as a book better than collections of random or related columns, and because building a getaway in a foreign country appeals to dreamers. I liked it, but didn’t love it.

As for the origins of these books in my life, “Machineries” dates to childhood, “Chips” may go back 20 years and “No Poems,” “The Tomb” and “Gomez” are relatively recent, probably within the past five or six years. I think “Gomez” came from Bookfellows in Glendale (It’s signed, by the way), “The Tomb” from downtown LA’s Last Bookstore in 2011 and “Machineries” from the long-gone Double R Book Nook in Olney, Ill.

So that was my October. I wanted to read a Dave Barry book, or finish another Poe collection, but that’s okay. I kept pace with four authors and that was satisfying. I have more books by each to read and will steadily make my way through them.

What have you been reading?

By the way, the photo below is extra-boring because the Benchleys don’t have dust jackets; that’s “Chips” on the upper left and “No Poems” at upper right.

Next month: another month of weird heroes. 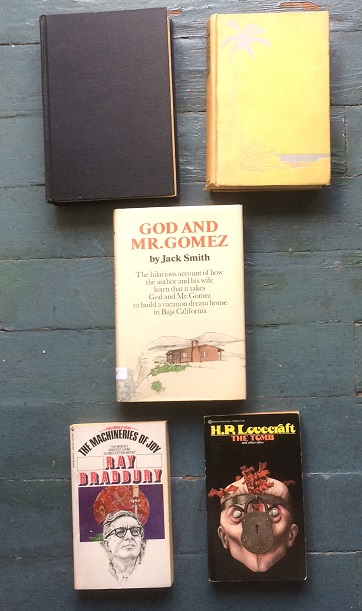