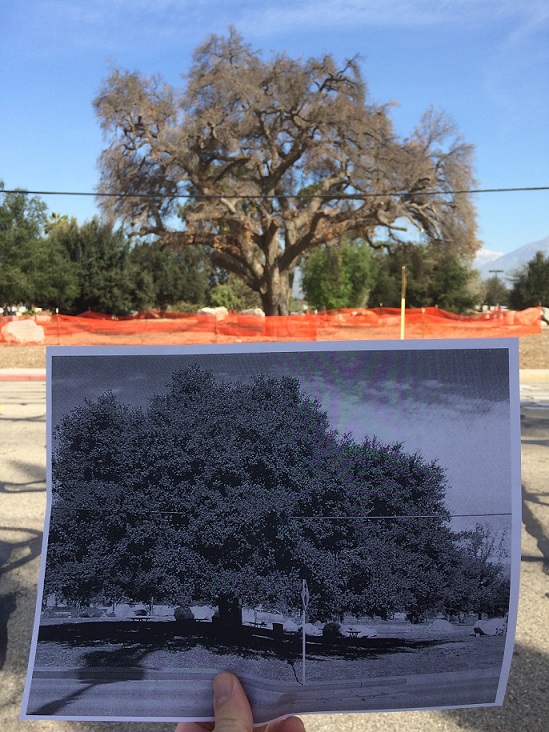 A big old tree in Montclair has been around for an estimated 150 years, and possibly longer. But it won’t be there much longer: It’s died, despite efforts to save it, and will soon be cut down. Friday’s column tells the tale.

Above, a current view of the tree (at 4594 San Bernardino Street, west of Monte Vista Avenue) contrasts with a photo from a few years ago; below, Dave Schroeder of the Chino Basin Water Conservation District takes a close look at the massive trunk. 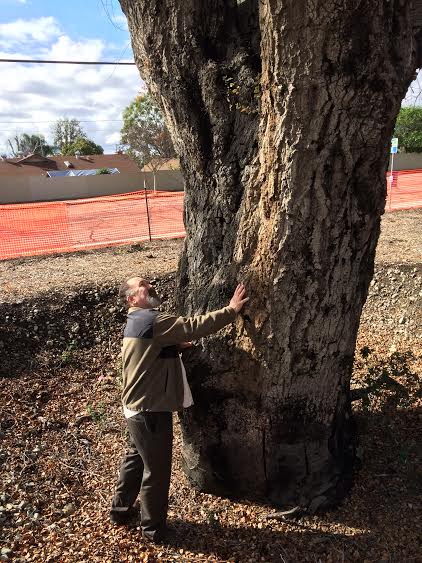 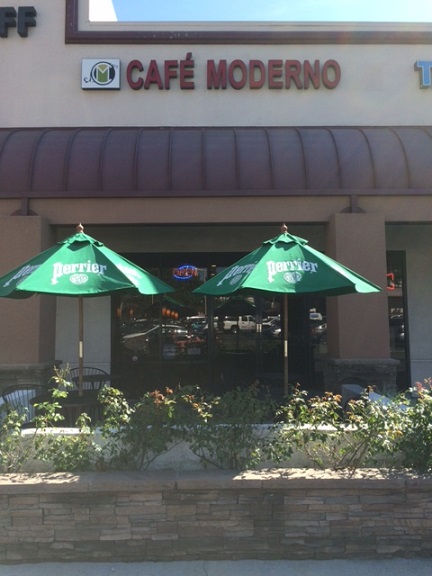 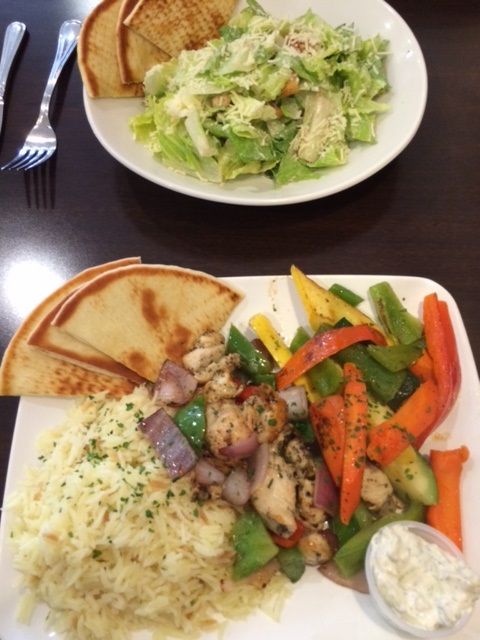 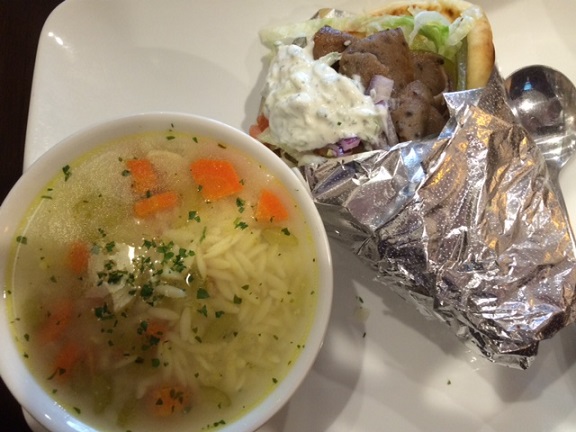 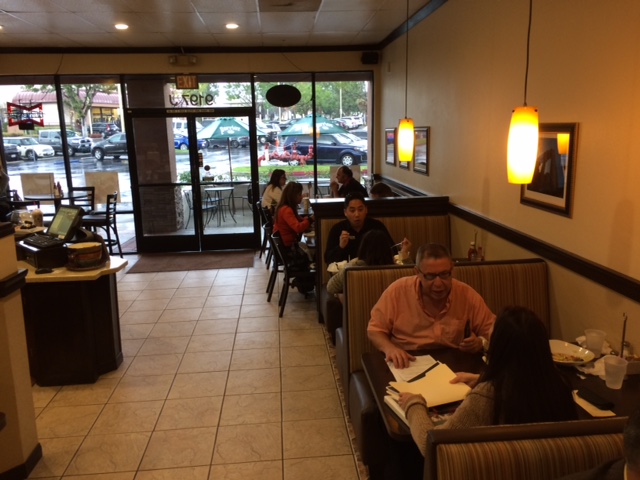 Wednesday’s column rounds up a bunch of short items, many of them from the City of Trees and Ph.D.s, plus a few cultural notes — and an unusual question asked at my Pomona talk last Friday. 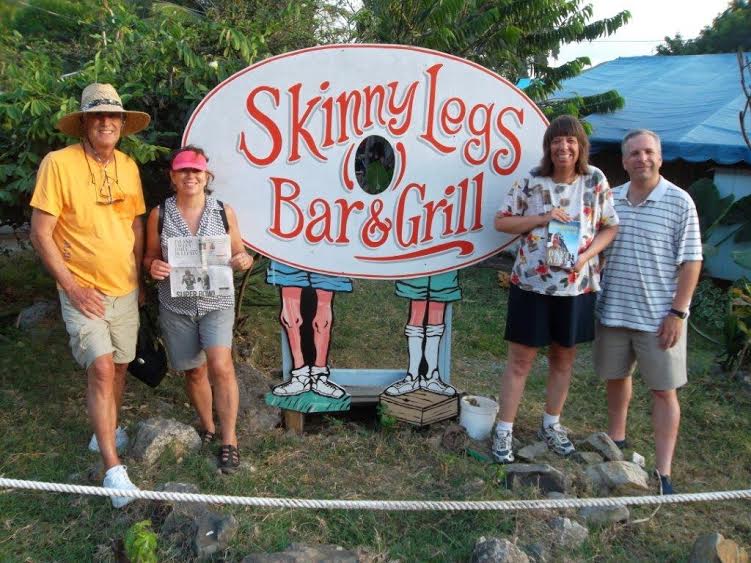 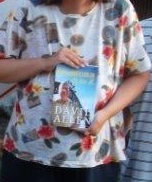 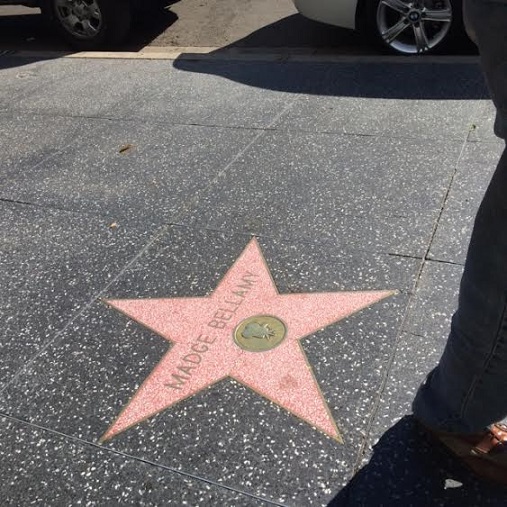 In writing about 1920s and ’30s actress Madge Bellamy, who died in 1990 in Upland, I noted in October that she might be the only Ontario resident with a star on the Hollywood Walk of Fame and said I’d have to visit her star sometime.

The other day, I did. I was on my way to Amoeba Music. I got off the subway at Hollywood and Vine, then walked west. Her star is at 6715 Hollywood Blvd., about five blocks west of Vine, between Wilcox and Hudson. It’s like any other star, but I’m glad I paid homage.

Below, Madge Bellamy in “White Zombie.” 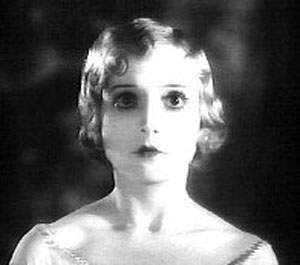 A former Cal Poly Pomona student decided to unearth and document the story of Pomona’s long history of gay bars, which go back to 1969. I tell that story in Sunday’s column. 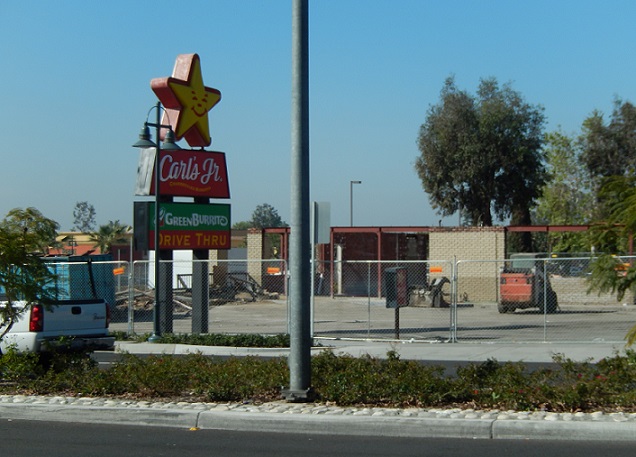 Friday’s column ends with highlights from this week’s Ontario council meeting and starts with the observation that a Carl’s Jr. that Ontario had tried to relocate a few yards, without success, is staying put and renovating its building. (Look for a lot of subtle and not-so-subtle burger references.) In the middle there’s a couple of Culture Corner items. 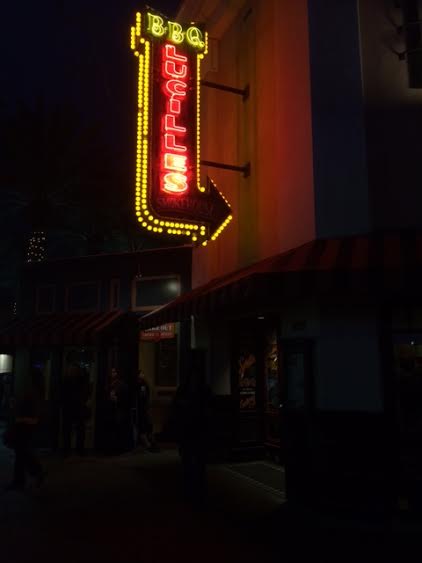 Lucille’s, a barbecue chain, was one of the original tenants when Victoria Gardens opened in 2004. And it’s still there, while adding a location in Chino Hills. Did you know the Signal Hill-based chain is owned by the same people behind the coffee shop chain Hof’s Hut? The gauzy story on the Lucille’s website about its origins under “Lucille Buchanan” is actually fiction, as the company admits. Ha ha!

I don’t feature chains here very often, but when there’s only one or two local locations, I’ll do it. In this case, a group of friends was celebrating a couple of birthdays recently at the VG, so I was there anyway. It was a Saturday night and the place was jammed.

Lucille’s is colorful and corporate-kitschy, with neon signs outside and quaint-looking advertising-type signs inside: “Good choices: FDR & BBQ,” “Was one mint julep the cause of it all?” The booths have coat racks and hanging lamps reminiscent of mid-century diners. But many employees wear earpieces to receive orders from their BBQ Overlords, or maybe Memphis, so it’s not quite cozy.

The food’s pretty good, actually. One of my friends swears the jambalaya is the best he’s ever had. My experiences there have been solid. The menu has barbecue, Southern specialties, sandwiches and salads.

That night I had a decent half-rack of St. Louis ribs ($24, below) and two sides: cheesy grits, boring, and collard greens, surprisingly good. When you’re done, they give you a hot towel, like at a Japanese restaurant, and that’s a nice touch, and better than Wet-Naps, for cleaning sauce off your hands.

I went back for lunch a few days later to try something else, getting a pulled pork sandwich ($12, below) with more of those greens. It was a meaty sandwich and I ate some of the pork with a knife and fork. This was a good choice.

There’s an adjoining bar, the Flying Pig Lounge, where they have a band every night playing blues. Otherwise, the sound system has blues, of the sleek B.B. King and Eric Clapton variety. They probably don’t know who Peetie Wheatstraw is.

We don’t have a lot of true Southern restaurants out here (J&J’s in Pomona is my favorite), making Lucille’s a credible barbecue spot by default. It’s a cartoon version of the South, sure. But so what? Cartoons are entertaining, and as chains go, Lucille’s is benign, and even fun. 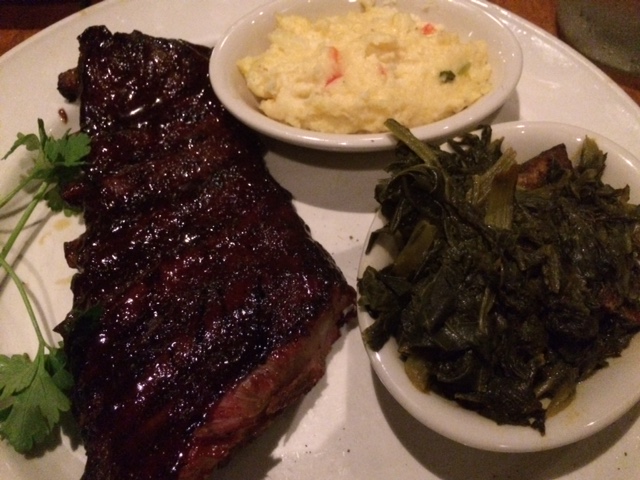 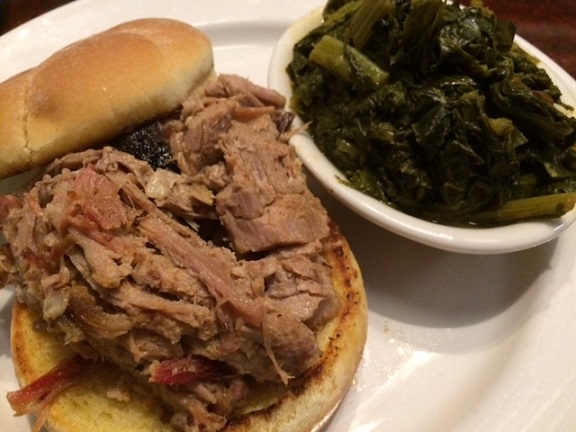 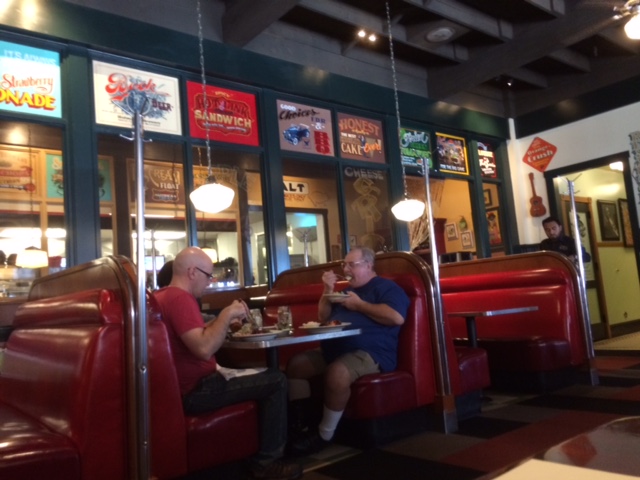 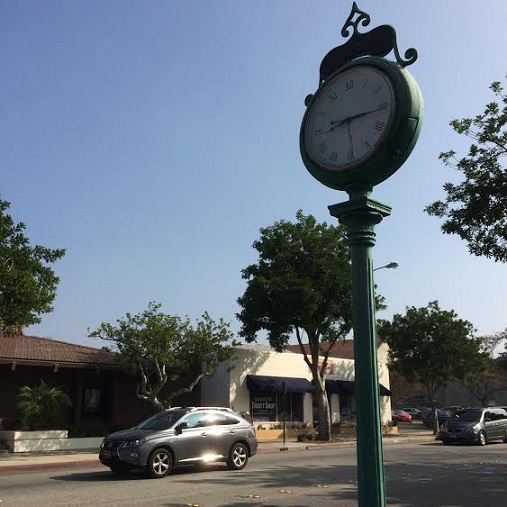 A clock in downtown La Verne is broken, with the hands stopped at times a half-hour apart. Why? The answer is in my Wednesday column — along with Cultural Corner items and a related La Verne item about the city’s origins. 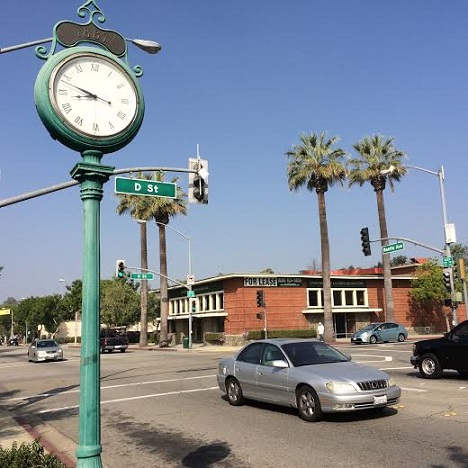 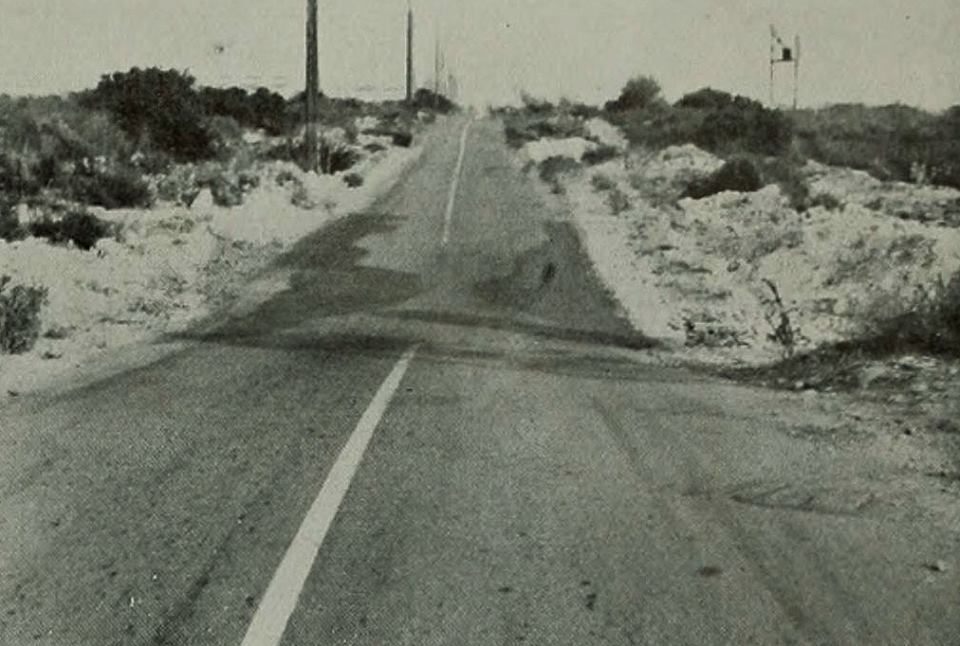 I’ve heard of “the dips” and “the bumps,” both of which were wiped out by progress but which were beloved by young people. Some of you commented on them a few years back on this blog on an unrelated post.

But then this photo popped up on Facebook’s “Growing Up in Upland” page, courtesy of Darin Kuna. It dates to 1939 and shows 19th Street between Upland and Alta Loma, looking east. Notice the dip?

Reader Rich P. explained the lay of the land in a comment on this blog back in 2008:

“The 19th Street bumps were on the Cucamonga Creek wash, between the flood control channel just west of Sapphire and Campus. They were wiped out by the Colonies project. They were dangerous, because some people would drive slower in case some nut was making a blind pass in the other direction, and the nuts would pass these slower drivers. My daughter loved the bumps at normal (not airborne) speed.”

Then there were “the bumps,” located on Base Line Road/16th Street between Claremont and Upland. Reader Tad Decker explained what those were:

“At the time, this was a long stretch of two-lane highway through barren, rocky scrubland. The road basically followed the natural topographic contours of the area, and thus was very hilly. If you traveled the road at a high rate of speed, you could be airborne for a second or two. This was great fun for me as a child with my dad driving, but the bumps were smoothed out by the time I was behind the wheel myself.”