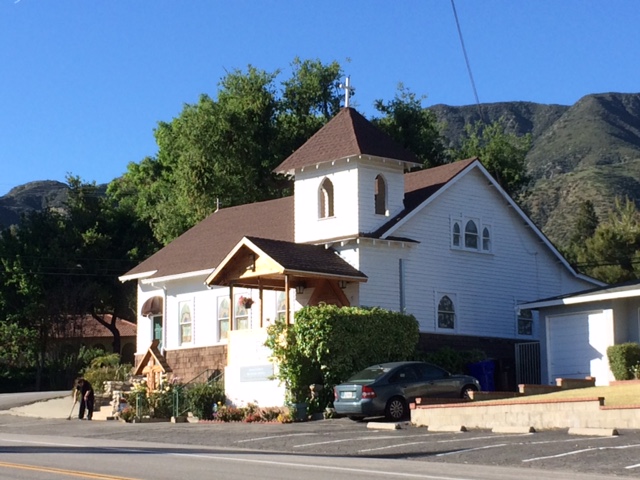 I was in the northern reaches of Upland on Friday when I decided to eat at Giuseppe’s a little further north in San Antonio Heights. Afterward, at my car, I noticed the church across the street, its white paint and quaint style standing out against the mountain and greenery rising behind it, and had to take a photo.

What sort of church, though: Methodist? Congregational? Nope. A sign identifies it as Elevation of the Holy Cross, Romanian Orthodox Church. Impressive.

Obviously the building predates the current denomination. Nosing around online, I found a copy of the April 2013 issue of the San Antonio Heights community newsletter. It explains that the church began as Community Church in 1906 — although 1916, the date Megan Hutter gives in her “Images of America” history of San Antonio Heights, may be more reliable.

The great-great-grandmother of current resident Barry Turner donated the church to the community. Also, “this was the location of the first stop for trolley cars coming up Euclid Avenue in the early history of San Antonio Heights.”

When the congregation outgrew the building, it served as a chapel and was used for weddings. The building was known as the Chapel of the Wildwood. It was acquired in 2010 by the Romanian Orthodox Church, which was founded in L.A. in 2001. Services apparently began in 2013. They have services Friday nights, Saturday nights and Sunday mornings.