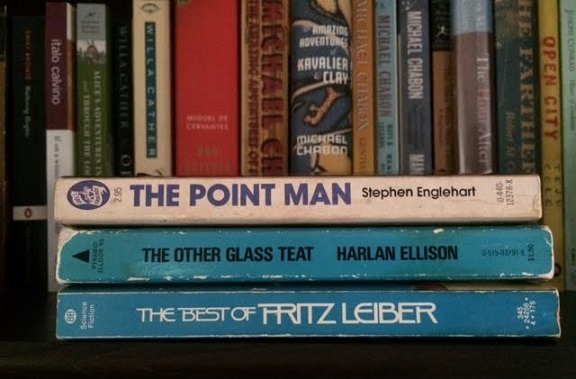 June was not a shining month for me, book-wise, in a couple of ways: It was a rare month in which I bought more books than I read (I really try to avoid that), and I read only three books, not the usual four or more.

On the other hand, those three total nearly 1,100 pages, and two of them have languished unread since the early 1980s, so this wasn’t such a bad month. And to have bought only five books on a vacation in which I visited four bookstores demonstrates remarkable restraint, at least in my eyes. The sixth book is by a friend and was a must-buy.

Overall, then, it wasn’t such a bad month. The books weren’t bad either. I want to single out the Leiber collection, which based on the store stamp came from Ventura’s Book Rack, I would say about five or six years ago, although it may really have been bought at Ralph’s Comic Corner in the same city. I hadn’t read anything by Leiber, a respected fantasy writer, but I’m glad I read this. Most of the stories are distinctive and a few were remarkable, such as “The Man Who Never Grew Young.” It’s one of those pieces of writing where when you realize what he’s doing your mouth falls open. I bought another out-of-print Leiber collection on vacation just to have one around.

Ellison’s book is the second of two that collect his LA Free Press columns on TV from the late ’60s and early ’70s; as before, his essays are more about youth culture, politics and the times than about TV. But this does serialize a script he wrote for “The Young Lawyers,” as well as present two blistering, over-the-top columns after the episode was filmed and aired in a manner not to his liking. The copy I read is from the ’70s, purchased in the past decade, but I have an ’80s edition that I got when it was published, making “The Other Glass Teat” one of the older unread books on my shelves.

I got 150 pages into a 450-page third book that there was no way I was going to finish in June. Rather than finish only two books this month, I set that aside (look for it next month) to read the 350-page, but breezier, novel by Englehart, a well-known Marvel Comics scripter of the 1970s. I bought it used a couple of years after its 1981 publication but never felt compelled to read it. It’s about a San Francisco disc jockey who gets embroiled in mystical doings, which Englehart ends up explaining at more detailed length that was probably good for his plot. “The Point Man” is still commonly found in used bookstores, and he’s since written one or two sequels.

We’re halfway through 2015 and I’ve managed to stick, more or less, to my reading plan for the year. I’ve read 35 books, but as 17 of those were read in one month (March), and with some large books ahead of me, I’m not going to get much past 50 this year. My next six months are likely to involve more old science fiction, with a smattering of fiction and nonfiction (my annual Jack Smith book still lies ahead). How was your month, and are you reading what you hoped to be reading?

Next month: That book I started in June (assuming I finish it), and more. 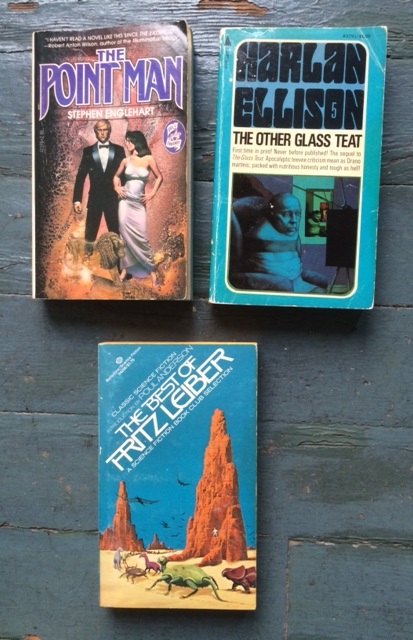