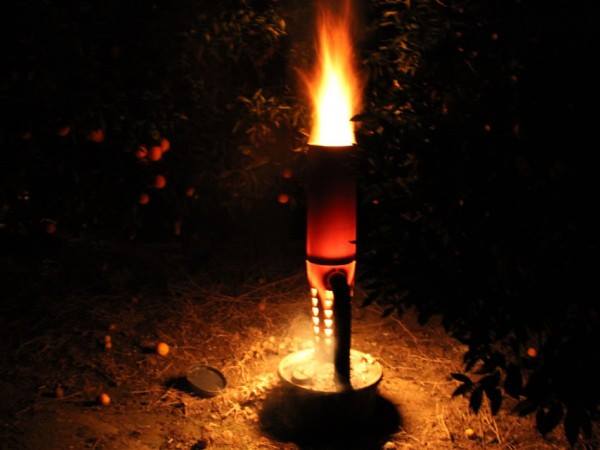 People who grew up here into the 1960s can recall or maybe took part in the wintertime ritual known as smudging. If temperatures dropped to freezing, a citrus crop might be ruined, and thus orchard heaters were put out in the groves and lighted to generate artificial heat. In a sense, they were the forerunners of the heaters used on restaurant patios, except these burned oil and created a blanket of haze.

It was a process that might last all night, as heaters were set out, lighted, checked, refilled or relighted. On the Rancho Cucamonga History page on Facebook, Jane Vath O’Connell recently penned a reminiscence of those days, which she invited me to share.

I remember the frosty nights in Alta Loma when my family would sit around the radio and listen to the ‘frost reports’. In every rancher’s kitchen it would be the same sight. If they predicted a freeze, my brothers would call their Alta Loma High School friends. Time to go to bed. Mom & I would stay up to check the grove thermometers. When it got to 29* we would wake my dad and brothers. My brothers would call their friends and there would be a commotion in the house while they assembled and I would drift off to sleep with the sound of the wind machines used to keep the air flowing through the groves. Throughout the night, I would hear the guys as they came back to the house to get food or hot drinks to get them through the night.

The next morning, when I got up for school, there would be a thick, black haze in the air and my brothers would be allowed to sleep in. Half the boys in Alta Loma High School would be absent and that’s just the way it was in this farming community. Dad was making breakfast for me, not having slept at all. He had to go to work but would first stop by Growers Service on Baseline and Hellman to order more smudge oil. I would go with dad sometimes and always enjoyed jumping off the loading dock amid the smell of smudge oil.

I’ve heard many stories of how those long, cold nights turned many boys into men. As did many ranchers, my father had a ‘day job’. He would come home after work that day and try to catch some sleep as the whole process started again.

Thanks, Jane. One aspect of her story that I hadn’t understood before, but which makes perfect sense, was that for many, farming was a sideline, probably because citrus isn’t a year-round crop. You might tend your grove, even all night when it was freezing, and then go to your real job.

Does anyone have memories to share of that era?