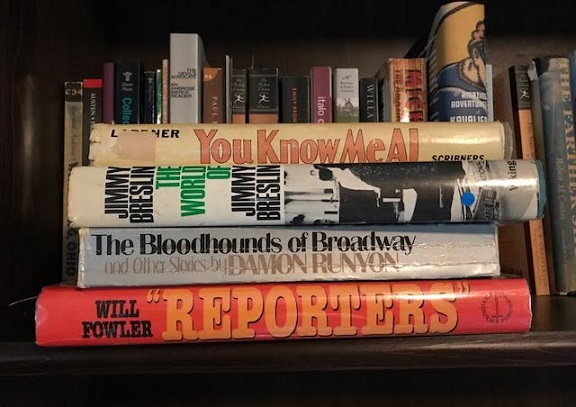 Books read: “Bloodhounds on Broadway and Other Stories,” Damon Runyon; “Reporters: Memoirs of a Young Newspaperman,” Will Fowler; “The World of Jimmy Breslin,” Jimmy Breslin; “You Know Me Al,” Ring Lardner

I spent my reading time in April on old-time books by or about journalists. A convergence of factors was at work.

I’d been hoping to read Fowler’s book because there’s a long chapter on Jim Murray, one of whose collections I read last year. But then Breslin died in March, and his book, on my shelf for eight years, demanded to be read. The Runyon and Lardner books were among my oldest unread books, and while they’re not journalism exactly, both men were journalists, and Breslin once wrote a biography of Runyon. So it all made sense, in my mind at least, and thus was a month of reading born.

It’s also possible that my 20th anniversary at the Bulletin, and subsequent 30th anniversary in newspapers, played a role as well. In any event, this proved to be one of my best all-around months for the ol’ Reading Log, as I liked each book, some quite a bit.

The Runyon book collects 20 of his Broadway stories. He has such a distinctive writing style — present tense, no contractions, narrated by someone who is trying to be precise and elevated (an Adam Gopnik New Yorker article lays this out delightfully) — that his work is almost immediately recognizable as his, and that almost any sentence is funny.

The stories themselves are generally upbeat and end happily, or at least neatly, so this isn’t great literature in the approved sense. But Runyon is worth reading as a stylist, if nothing else.

Fowler’s memoir of working for various LA papers in the ’40s and ’50s is recommended to journalists and devotees of that period of LA’s history, but no one else; the writing and copy editing are often dreadful. Flawed as it is, his book is really eye-opening about the sort of access reporters had to crime scenes, the hospitals and the morgue, and how newsrooms operated. Fowler was first on the scene of the Black Dahlia murder scene, and that’s an interesting, if gruesome, chapter.

(There’s a Pomona anecdote in the book that will make my column sometime.)

Lardner’s book, from 1916, is written as a series of letters from a neophyte, and dense, pitcher to his hometown friend, Al, about the game, his relations with management and his personal life. They’re full of charming misspellings and self-delusion. It would be wrong to call the result hilarious, but amusing, sad and infuriating, yes. Jack Keefe, the pitcher in question, will take no advice from anyone and will never admit a mistake, blaming every loss on his teammates. He might be presidential timber.

Lastly, Breslin’s book, published in 1967, comprises the best of his New York Herald Tribune columns from ’63-’67, with some fond and hagiographic commentary by his editors. I found this book remarkable. Three columns about JFK’s assassination rise to the top, including the understated one about the gravedigger, the piece for which Breslin is best remembered. (Instead of following the pack to the funeral, he’s the only one getting the gravedigger’s perspective.)

But then there’s also his reporting from Harlem, and a series from the march on Montgomery, and from Vietnam, all amazing, detailed and seething with quiet anger. Two on the dying Winston Churchill also are powerful. Some of the ones from Breslin’s own cranky perspective, like on how he hates his neighbors, kind of put me off, but overall, I finished this book wanting more. (It appears he might only have one other collection of columns, amid his myriad of novels and single-topic nonfiction, but perhaps a Jimmy Breslin Reader, or somesuch, will be in the offing now that he’s gone.)

I may write a column on Breslin, if space permits, but if not, this will stand, and you blog readers will have the exclusive (to keep the journalistic theme going). I won’t make a blanket recommendation of “The World of Jimmy Breslin,” but you might like it; certainly you ought to read the gravedigger column, which can be found online here; “A Death in Emergency Room One,” his account of Kennedy’s death, is equally gripping and can be read here.

I’ve had the Runyon and Lardner books since the late 1980s, and boy is it nice having them out of the way; Fowler’s was bought at Anaheim’s Book Baron during its closing sale in 2007, and Breslin’s was picked up at St. Louis’ Dunaway Books in 2009.

How was your April? Was it the cruelest month? I hope not.

Next month: a vacation to the islands 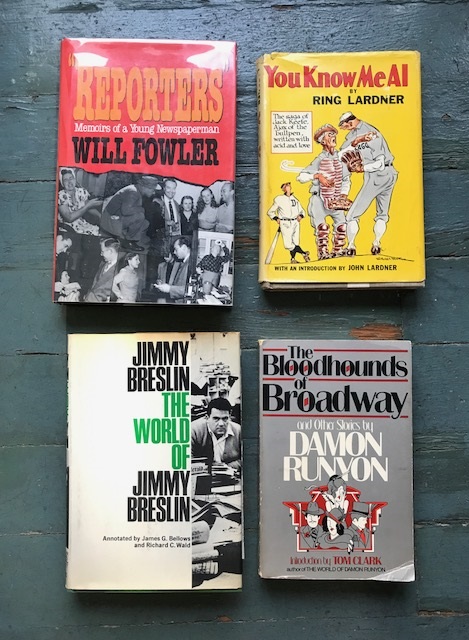