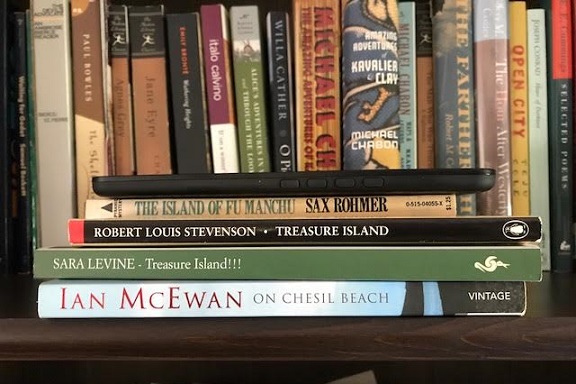 Books acquired: “Shake It Up: Great American Writing on Rock and Pop from Elvis to Jay Z,” Jonathan Lethem and Kevin Dettmar, editors.

In May, it was time to take a trip to the islands. (Cue the Surfaris song.) All my books had “island” in their title except for one that had “beach.” Cowabunga.

The Fu Manchu is No. 10 in the series of 14, and the first I’d read in two or three years. The island in question had voodoo, not to mention a villainous lair in a dead volcano, and was not only a precursor to Bond but to “Atlas Shrugged,” in a way, as great scientists are kidnapped and turned into zombie slaves by Fu. Great literature it ain’t, but it was fun.

I’d never read “Treasure Island,” although the rudiments of the plot and names (Squire Trelawney, the apple barrel, etc.) were familiar, perhaps from an animated version I saw decades ago (although I can’t find evidence online of its existence). Published in 1883, it’s still a gripping read.

“Treasure Island!!!” is a 2011 lark about a young woman who becomes obsessed with the Stevenson book and decides to use it as a guide to life. “When had I ever done a foolish, over-bold act?” she frets. I thought I would love it, and at first I did, but then the narrator’s cluelessness and the story’s superficiality made me glad to be done with it. Despite Alice Sebold’s praise, and the New York Times’, it was ultimately disappointing. But certainly funny in spots.

“On Chesil Beach” was of a different order entirely, a 2007 novel about a couple’s wedding night in 1962 England, and how the couple who thought themselves perfectly matched discovered how little they understood each other. A poignant look at the dawn of the ’60s, before the sexual revolution occurred. Nick Hornby had recommended this in his Believer column.

Lastly, “The Island of Dr. Moreau,” another classic, from 1896, that I’d never read despite having a general idea what it was about from other media that it inspired. For the uninitiated, a scientist tampers with nature by grafting together various animals and altering their brains to make them semi-human. Wells had quite the imagination, and he knew how to tell a compelling story.

These books came into my hands in the past decade-plus. “Treasure Island!!!” was bought in 2012 at Subterranean Books in St. Louis, and “On Chesil Beach” was bought last September at Powell’s Books in Portland. Can’t recall where I got the Fu Manchu, possibly the Book House in St. Louis, and Stevenson’s may have come from Brand Books in Glendale. My Kobo e-reader was bought at Borders (RIP) about eight years ago; it came loaded with 100 classics and I read one now and then.

Have you read any of my choices, readers? (I’m sure someone has read “Treasure Island” or “Dr. Moreau,” or both.) How was your May? And were island breezes involved?

Next month: I let things slide. 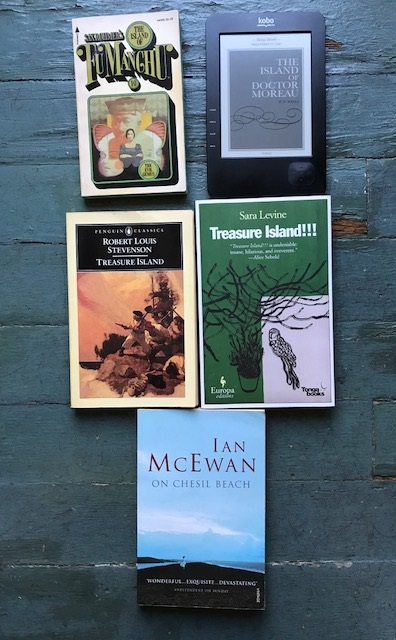