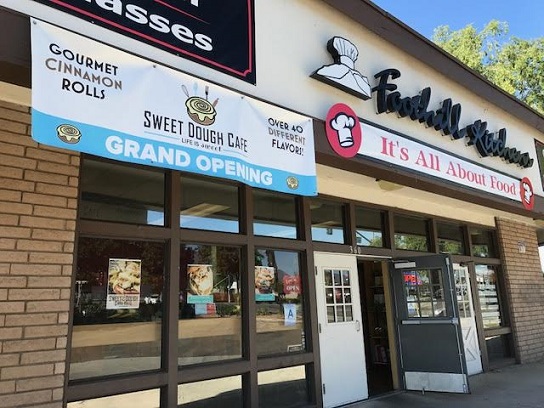 They make cinnamon rolls at Sweet Dough, which is in the Foothills Kitchen incubator in the space that used to have Bert and Rocky’s. It’s a walk-in operation with limited seating. Most people evidently want to eat their cinnamon rolls out of sight, maybe with the container open on their lap, where they can huddle over it in privacy. 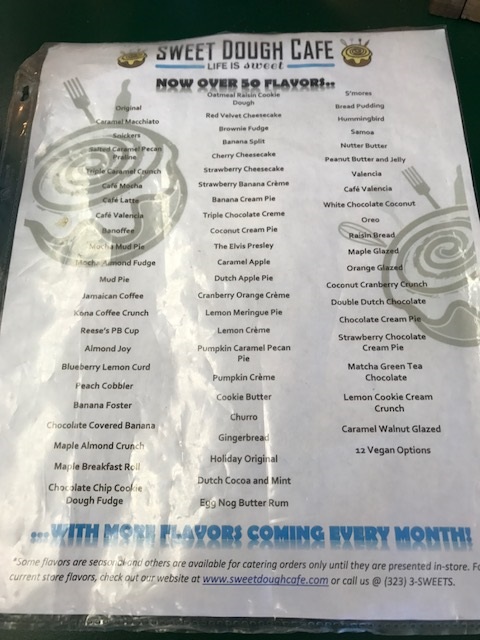 I’ve had the Valencia orange, the original cinnamon and one that was more clearly a dessert than a breakfast item, the peanut butter and chocolate. They’re pictured below in that order. 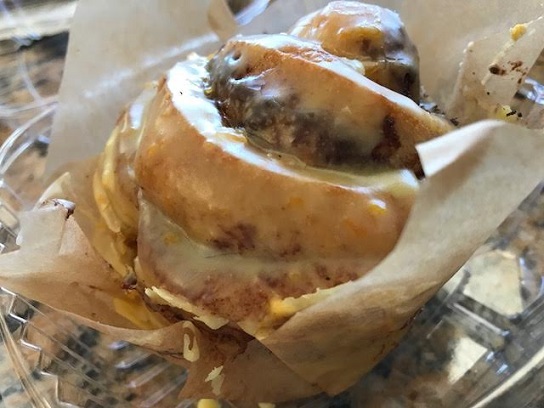 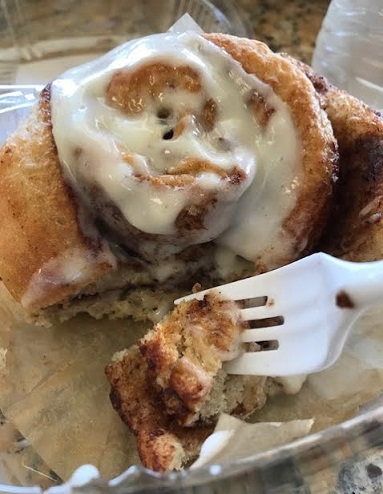 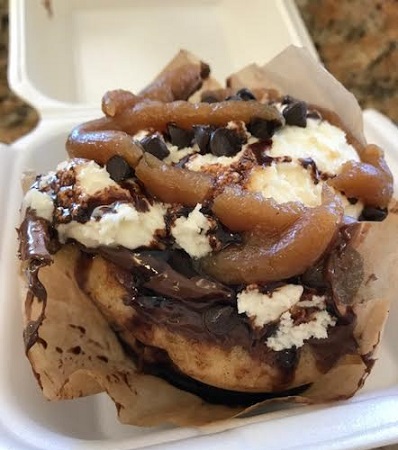 These are proportionately like cupcakes, but bigger, rather than disc-shaped. I liked them, the first two more than the more elaborate peanut butter and chocolate, which may be more a reflection of my no-frills taste than commentary on the rolls themselves. One thing’s for sure, Sweet Dough’s orange beat Pillsbury by a mile.

The staff is friendly, particularly the woman I believe is the owner. Her young son helped ring me up on my last visit. 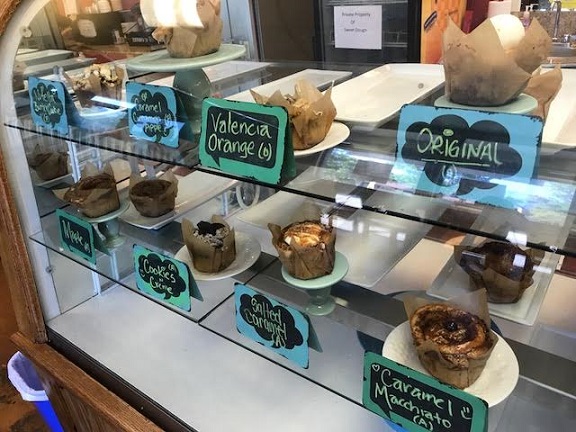 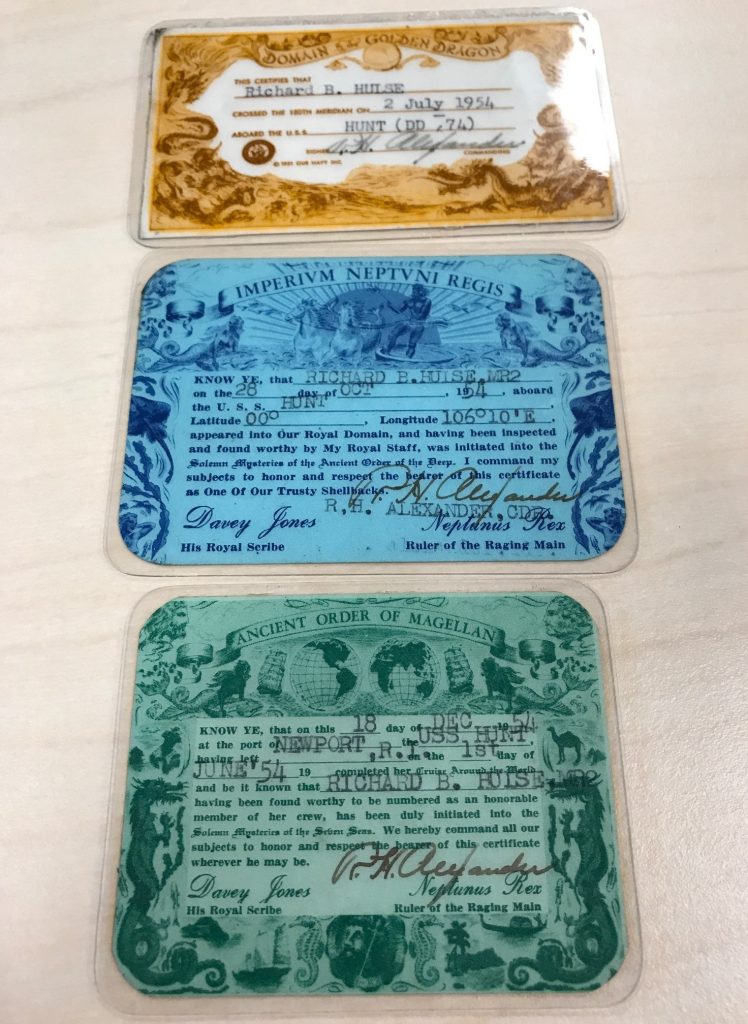 Dick Hulse served on President Truman’s yacht and circumnavigated the world aboard the USS Hunt in 1954. Now retired to Upland, Hulse is the subject of my Wednesday column. Above, three laminated cards he got with unofficial Navy honors. Click on them for a larger view; they’re cool. 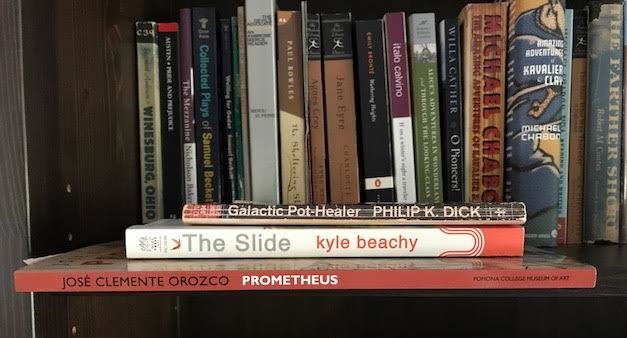 Summertime, and the readin’ is easy … and not up to snuff. My prediction last month that I would let things slide in June proved accurate. That was in part a nod to the only book I knew I would finish, “The Slide,” but also to the likelihood that it would be a light month. (Explanation later in this post.)

“The Slide” is a 2009 novel set in St. Louis; I bought it in St. Louis in 2013 at Subterranean Books, attracted by the prospect of a rare novel in the city I visit annually. Not attracted enough to read it immediately, I’m afraid, but that’s how things go in the Reading Log. Anyway, I resolved to read it before and during my St. Louis visit this year, and did so. It’s about a newly minted college graduate who returns to the Gateway City for the summer to figure out his next move and his relationship with his college girlfriend, who has gone off to Europe. The novel was well-reviewed, and I liked it too. (It will be the subject of a column item in the near future due to an unexpected local-to-us angle.)

“Galactic Pot-Healer” has been on my shelves since 2004, when I bought it at Moe’s in Berkeley, and at 144 pages, it may have been the shortest book still unread. It’s another one I’d been hoping to get to the past few years. The title is about ceramics, not plants: The lead character fixes broken pottery, but work is scarce and he’s giving up hope until being recruited by a mysterious being from another planet to labor on an enormous project. Often absurd, in a good way, this is also about entropy, decay and the importance of finding a purpose in life. If not in the top rank of PKD’s oeuvre, it’s comfortably in the second tier, and worth reading if you’re doing a deeper dive.

After finishing “Pot-Healer,” I had another week left in June and decided to squeeze in “Prometheus,” a museum catalog from Pomona College, published in 2001 and given to me last year by the museum. The Orozco mural in question, in Frary Dining Hall since 1930, is a famous piece, and a Getty Pacific Standard Time initiative is built around it starting this fall. So it was read for research purposes, and much note-taking ensued. Look for more in a column or two later this summer.

In August I’ll be traveling and part of June was spent reading up on that as well as making other preparations; the same will be true in July, I’m sure. But I was glad to get three books out of the way, especially the one that was almost like an assignment, and we’ll see what July brings.

We’re at the halfway point of the year, by the way. How is your year going (I’m at 23 books), and how was your June?

Next month: A month about nothing, and more. 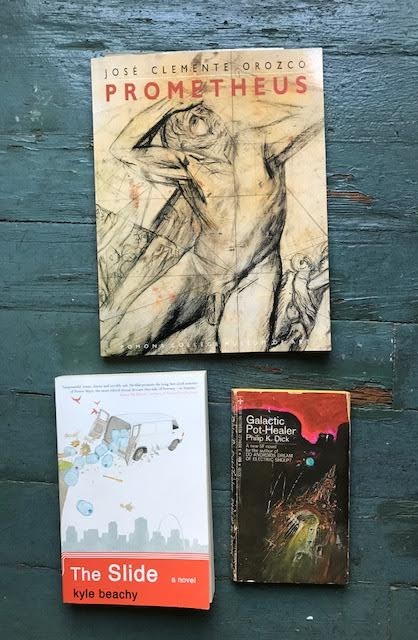 All our cities have political intrigue, even the ones that seem sleepy and don’t get much coverage. Chino Hills has had to shift to districts for its City Council elections, and the map process is already having an effect even though it doesn’t kick in until the November 2018 elections. I share what I’ve learned in Sunday’s column. (Plus, for the non-politically-minded, there’s some pet news.)