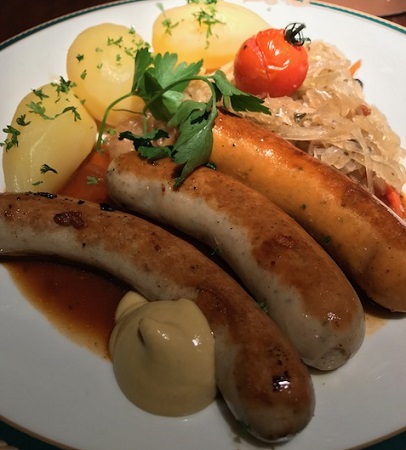 For Wednesday’s column, I write a little about the customs but mostly about the food and beverages from Germany and from my overnight jaunt to the Czech Republic. Above, three types of sausages, with sauerkraut and potatoes, in Dresden; below, a knuckle, sauerkraut and bread dumplings, also in Dresden; at bottom, the staff at a Prague shop prepare trdelniks. 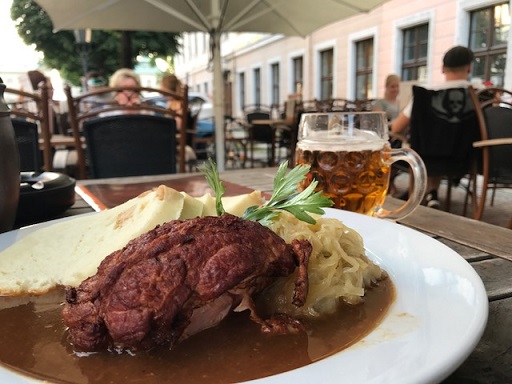 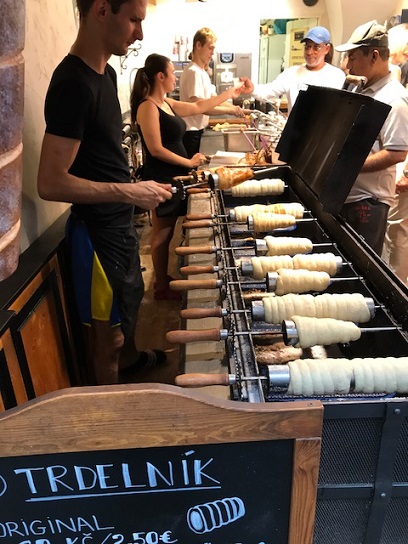 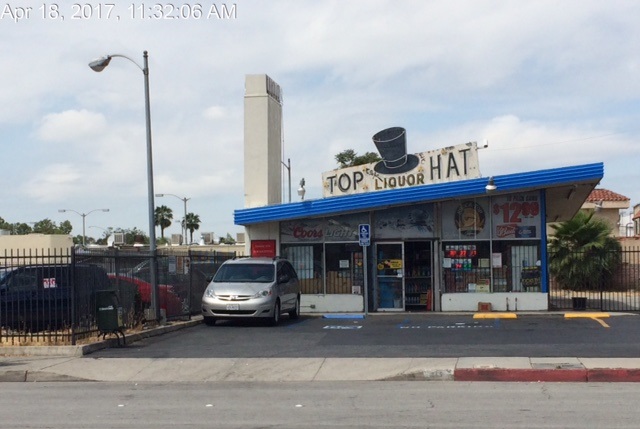 Top Hat Liquor, a long-lived Pomona shop with a jaunty roofline and cosmopolitan name, got a new paint job in April, as seen in the photo above.

To explain in brief why this is news, I had taken a photo of the business last October when passing by (on my way to follow candidate Tim Sandoval as he canvassed a neighborhood — I wonder what ever happened to him?), then forgot about it until finding the photo in July and turning it into a quick tribute post on this blog. That’s the photo below.

People got worked up on Facebook over the peeling paint, vowing to organize a clean-up and painting day after a plan to contact the owner. Well-intentioned, but it went about as far as most such online efforts, which are easier to type than to carry out.

But then City Hall contacted me with the photo above. “You’ve given readers the ‘before’ photo. Here’s the ‘after’ photo,” writes Mark Lazzaretto, development services director.

The code compliance team noticed the condition of the business in early April and by the 18th, the trim had been repainted and some of the banners and signs had been taken down for a cleaner appearance, he told me.

That’s good news, as well as being a lesson for me about taking care when presenting photos a few months after the fact. Even situations that have not changed in years sometimes change when you least expect it.

A tip of the top hat to City Hall. The next round is on us. 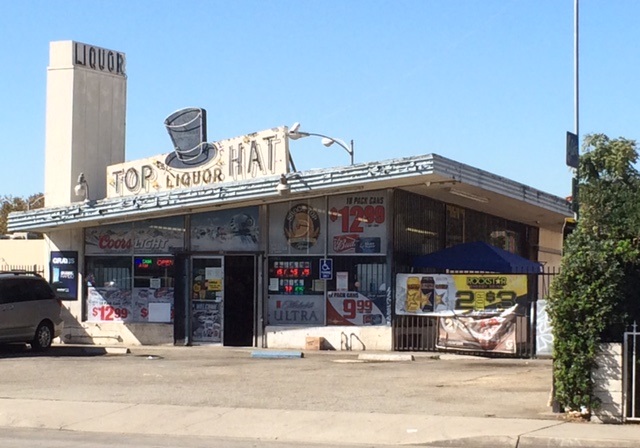 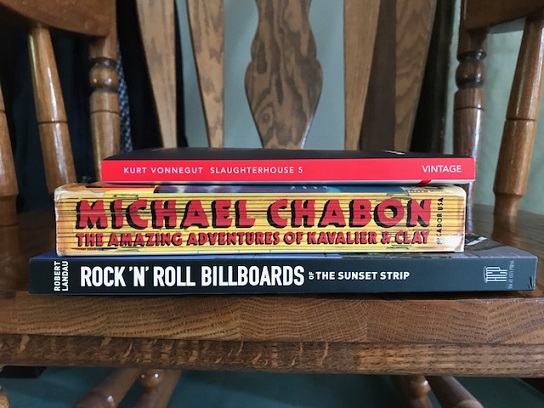 I used August and an overseas trip to finally tackle “The Amazing Adventures of Kavalier and Clay,” which I’ve owned since 2001 but which, at 639 pages, I was too intimidated by to start. The vacation didn’t really provide more reading time than usual, since I was also absorbed in reading pages from my guidebook, but it was good to finally be reading it: It won a Pulitzer and is about the early days of comic books, which are one of my hobbies.

Two young Jewish cousins create an escape artist character, making millions for their publisher and thousands for themselves, a common occurrence back then. Escape becomes a metaphor in the book; the artist’s family is still in Prague on the eve of World War II and he tries to liberate them, much as he himself escaped. Having scenes set in Prague, a city I was to visit, was an unexpected bonus. I liked the novel and found myself absorbed — even if it was a bit long.

Incidentally, I bought my copy at the San Diego Comic Con in 2001, when Chabon was the guest of honor. I wasn’t planning to buy the hardcover, but one morning I was browsing the near-empty Comic Relief vendor space when I realized owner Rory Root was speaking to fellow Berkeleyite Chabon. A big stack of “K&C” was between us. I got Root’s attention and said impishly, “If I buy the book, will Mr. Chabon sign it?” Root looked at Chabon and he smiled and said sure. He complimented the graphic novel I had in my hands, Raymond Briggs’ “Ethel and Ernest,” saying his wife had liked it. He said this was his first comic convention and he was enjoying it.

Later he would give a well-attended talk while wearing a T-shirt with the logo Miskatonic University, a sly nod to H.P. Lovecraft, which I somehow knew even though I hadn’t read any Lovecraft yet, having apparently absorbed just enough of the mythology through Marvel comics or other sources. My friends and probably hundreds more formed an enormous line to meet him and get his signature. Me, I’d gotten mine before his hand got tired. 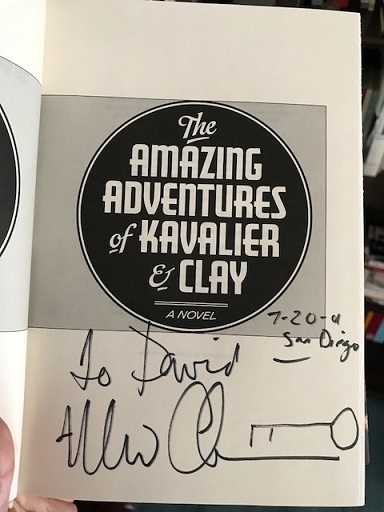 I felt too much pressure to keep this copy in nice shape, even if it was the 8th or 9th printing. Eventually I bought a beat-up paperback, possibly at Berkeley’s Shakespeare and Co., but even that sat on my shelf a few years. It did help to have a copy that could be toted around Europe with impunity. I suppose now I can sell it, while keeping the signed version.

It took me just over three weeks to read it, and it might have been the only book I read all month. It was, actually. But I finished Robert Landau’s book, which had been on my nightstand, Sept. 1, and Kurt Vonnegut’s novel Sept. 3, just in time for this Reading Log.

Taken when he was living in the neighborhood, Landau’s documentary photos of rock promotional billboards from about 1968-1982 now seem charming and magical. It’s an ode to a bygone era of ego stroking, big hair, heavy sounds, important (or “important”) albums, hand-painted billboards, Tower Records, rock DJs and a very local approach to marketing. I bought it last month from the author himself.

Absurdist and heartbreaking, the writing and structure of “Slaughterhouse-Five” appear so casual that they’re always on the verge of collapsing, but never do, and that’s part of the book’s brilliance. Still, 106 uses of “So it goes” seems a bit much. I bought this at Berlin’s Dussmann store a few days after a Vonnegut tour of Dresden, the setting of much of the novel, and hope to write a column about it shortly.

How was your August, readers? Any amazing adventures, or were you cavalier?

Next month: my annual Jack Smith book, probably, and more. 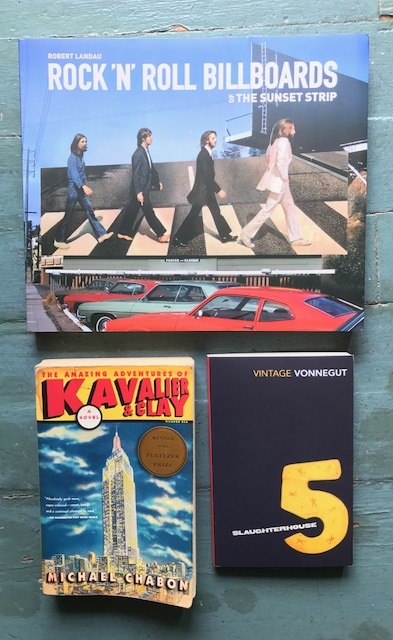 Thanks to a reader, I learned that Jerry Lewis filmed scenes for one of his films in Ontario. That item is followed by a recap of comments on my Facebook page about where and how people learned of Elvis’ death, and a nugget about the heat, all in Sunday’s column. Happy Labor Day weekend! 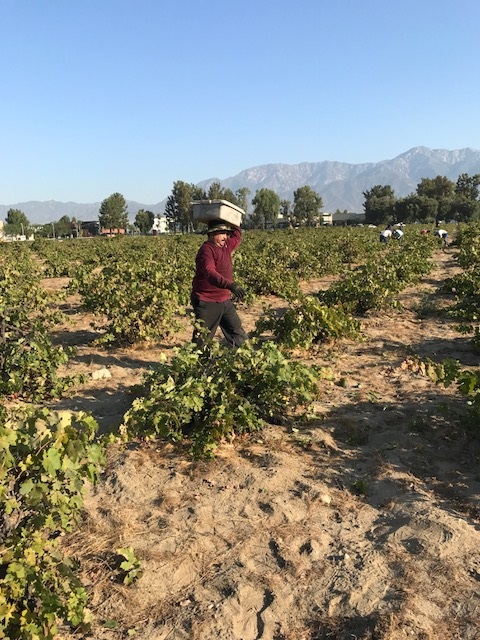 One of the most visible vineyards in the area is the one in Rancho Cucamonga at the corner of Haven and Fourth. The harvest this week is likely the last, though, as hotels have been proposed for the site. I watch as grapes are picked and write about it in Friday’s column (with great photos by Will Lester). Above, a field worker totes a tray of grapes to the truck. (I shot that one.)