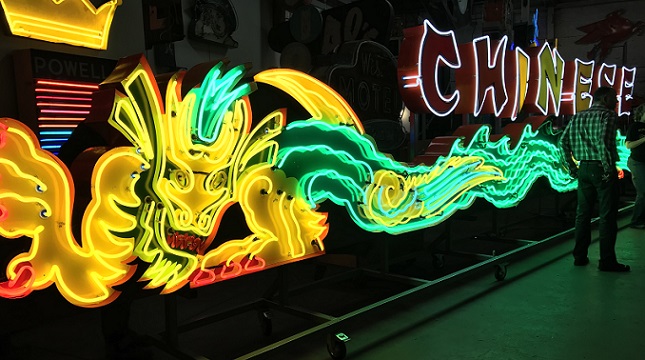 Remember the story of the neon dragon from outside Grauman’s Chinese Theatre that was being restored in Pomona? Well, as the photo above shows, it’s done. I got a peek during a private event Sunday and write about it for Wednesday’s column.

In Sunday’s column, I reflect on a year in reading — a year in which reading seemed more therapeutic than ever. 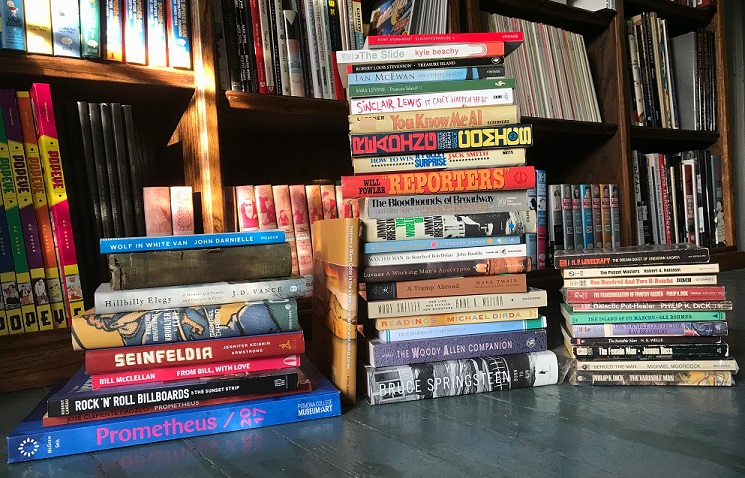 I made my way through 45 books in 2017. As always, it’s never enough — but I was glad to have read most of these, with only a couple of clunkers. They’re listed below in the order in which I read them, as pulled from my monthly Reading Log posts on this blog.

As usual I read more fiction than nonfiction, a couple of recent books, a few things for work and a lot of older books, both in when they were published or in when I acquired them. Any year in which you read two Shakespeare plays is going to be a pretty good year. How was your own year in reading?

Friday’s column ties up a few loose ends regarding filming in La Verne of “The Graduate” and “Wayne’s World 2,” while also offering a Culture Corner and a Valley Vignette. 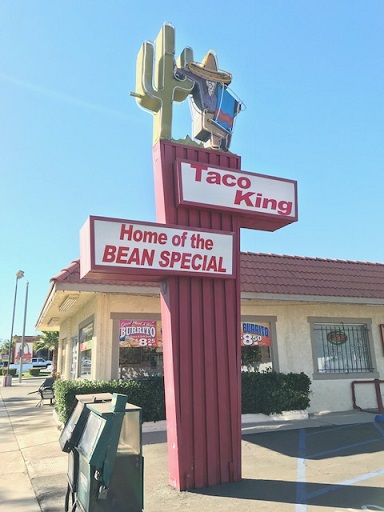 If I understand the history properly, this location was once Taka Taco (take a taco) and became Taco King in 1975. It’s a square standalone building in east Upland with a marvelous image in neon of a guy in a sombrero and serape leaning against a cactus and, elsewhere on the sign, an uninspiring motto, “Home of the Bean Special.”

I have never been tempted to order the bean special, whatever it is, but I have eaten at Taco King a few times over the years. It never struck me as exceptional. But I had a surprisingly good burrito there in October. I didn’t take any photographs except of the exterior because I was sure I’d written about Taco King here before. 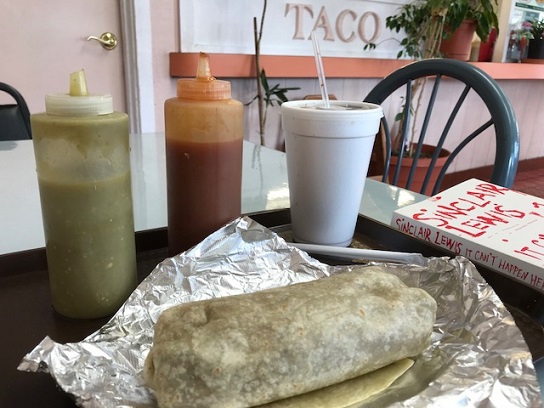 Wrong! A search of this blog revealed that I hadn’t. So the next chance I had, I went back and ordered the same thing, pictured above, a combination burrito with carne asada ($6.05). It was light on the beef, which would bother some, but the stew-like filling was, dare I say it, more traditional. The first time I got it as a combo (a combination burrito combo?) with chips and a drink ($9.20).

You order and pick up from a window, where they’ll place squeeze bottles of red and green salsa on your tray. (It’d be great if they also handed out copies of the Sinclair Lewis novel “It Can’t Happen Here,” but no, I brought that with me.) 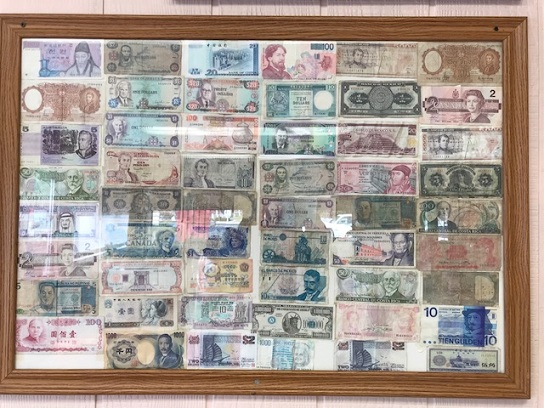 The small dining room is done in pastels. the wall art includes Mexican currency mounted inside a frame, and a few photos show the place as Taka Taco and then Taco King, labeled with the year.

Was anything here prior to Taka Taco, or was it the original occupant? Inquiring minds want to know. 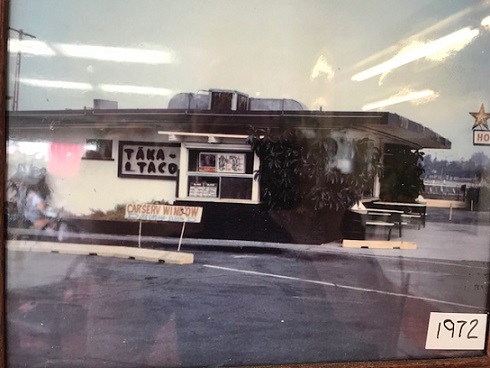 Taco King has tacos, of course, for $1.90, soft or hard, with carnitas, pastor, asada, chicken, beef and cabeza (head meat), plus burritos, taquitos, burgers, nachos, menudo and breakfast items. It currently has a middle of the road 3 stars on Yelp, the usual split-the-difference rating between those who love it and those who say they threw their food away.

Three stars is about right, though: solidly good. But I have newfound respect for the place. While there’s nothing hip or trendy about Taco King, and the overall look and style may veer closer to Del Taco than Tacos Mexico, when was the last time you had cabeza or menudo at Del Taco? 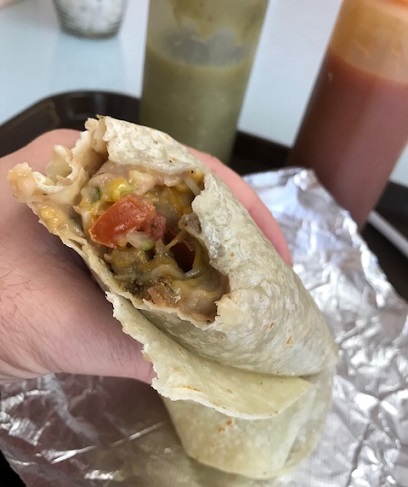 Consider this the How Did We Stand the Suspense Edition, coming as it does 10 days into the new year. I had planned to wait on this list a few days into 2018 to buy myself time to see an extra movie or two. But then I came down with a cold, which meant I couldn’t get out to any movies OR produce the list, the pen-and-ink draft of which was on my desk at the office. Sheesh.

At least I got to two movies in the final days of the year, and they filled my No. 1 and 2 slots.

It was hard to know where or if to place Arrival, which was a 2016 release when I saw it last January. Fences was another holdover, but I liked it less. Arrival would have come in around No. 8. From No. 11 down, the rest of my 2017 movies would run like this: Thor: Ragnarok, The Beguiled, Dunkirk, Guardians of the Galaxy Vol. 2, Kong: Skull Island, Beatriz at Dinner, Rat Film.

Obviously I missed or haven’t yet had a chance to see lots of good movies, among them The Post, Phantom Thread, Darkest Hour, Molly’s Game, Call Me By Your Name, Novitiate, All the Money in the World, The Florida Project, Mudbound and I, Tonya. Oh well.

In an annual ritual, I clean my desk and get a column out of what I find. In this case, that meant finally dealing with a small bag of crumpled, dirty newspaper pages from 1935 that a reader had “helpfully” donated and which had been put on my desk. Read all about it in Wednesday’s column.

As an addendum, a few items were written or half-written but didn’t make the cut for the column, and most of the notes, etc., were simply tossed because nothing of interest came to mind to say about them. And I didn’t get my desk cleared before the column was due either. So there’s still a slight mess. But things look much better, and there’s a psychological and organizational boost from that. Onward to 2018!

I’m about recovered from a bad cold this past week that laid me up. I worked a half-day Tuesday, to finish a nearly completed column drafted the Friday before, and managed another half-day Wednesday, in which I began my annual desk-clearing column by beginning to (duh) clear my desk, but Thursday and Friday I was out of it and stayed home. Thus, no column Friday or Sunday.

As I write this Sunday evening, I’m not quite back to normal, but feeling much better, thanks, and planning to be back at my desk Monday for, I hope, a full day. What a way to start a new year, huh?

While what I had would not have qualified as the flu, the great Roger Miller song “Lou’s Got the Flu” came to mind, and it’s shared above because it’s a hoot.

As has become standard practice, I expect to continue these Restaurant of the Week posts in the coming year. I like doing them, they get me out to new places and you folks seem to like them too. I’ve been writing them since September 2007.

Let me use this first of the year post to explain how I pick the 45 to 50 restaurants a year that are featured here.

Some come recommended, but many are simply places I drive past or hear about. I may eat there on my lunch break if it’s near our office, which is in Rancho Cucamonga. If on I’m assignment in a farther city, I often make a point of going for lunch or dinner while I’m in the neighborhood. If I’m meeting a friend for lunch during the week or on a weekend, we often pick a restaurant that would be good for the blog.

The restaurant might be new or it might be old. Wherever I go, I’m eating there anonymously and buying my meal without introducing myself. To my mind, I’m just a guy eating lunch or dinner — but taking notes and photos. I have no training to write reviews and don’t consider these blog posts to be reviews. They’re just my take.

If restaurant reviewing were actually my job, I would work harder at staying atop what’s new or popular, or seek out certain restaurants, such as a couple of Mexican restaurants in Rialto recommended by a taco expert. But it’s not. This is just a hobby.

Another note: I try to hit all 10 of our cities at least once in a calendar year. That means at best I may get to only a half-dozen restaurants in any city in a year. So my list of potential restaurants has a big backlog. (A few of them have no doubt gone out of business.)

All that said, I’m always open to your ideas. If there’s any restaurant you’re surprised I haven’t written about, tell me in the comments. If you have any questions about my approach, ask away. Next Thursday I’ll be back with a fresh Restaurant of the Week.

As always, past posts can be found by scrolling through the category listings on the right-hand side of this home page, where they’re organized by city. Or you can search for names in the search feature.

For Wednesday’s column, I name my favorite restaurants of the ones I tried in 2017, while also tossing in some Culture Corner items and a Valley Vignette.