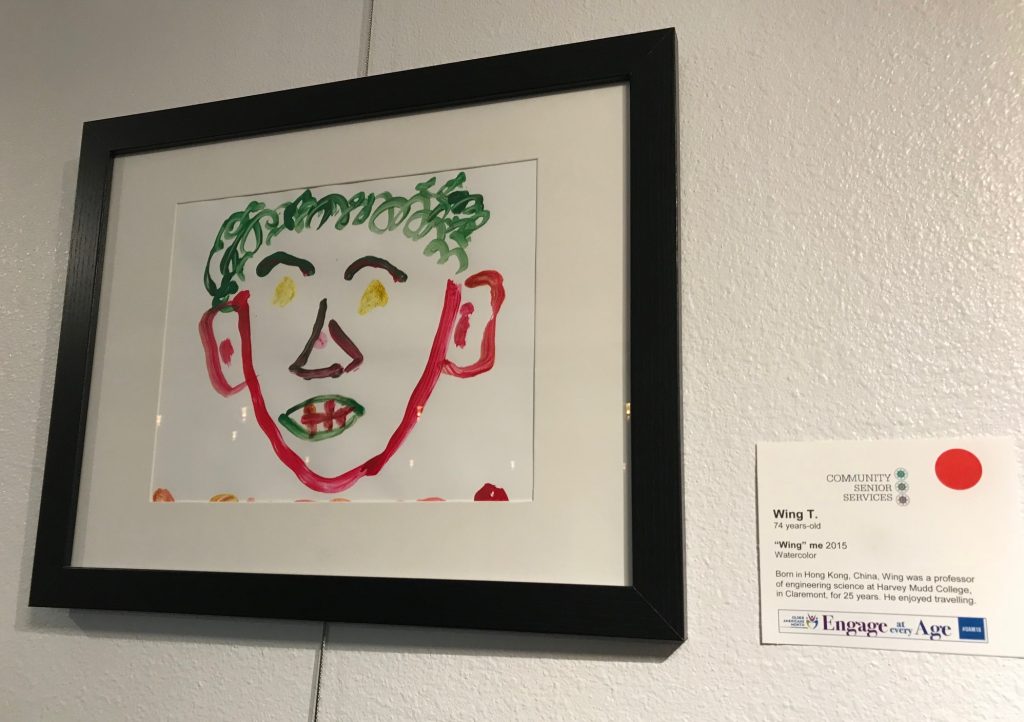 For Wednesday’s column, I round up a few extra facts about Bob’s Big Boy, present a bunch of Culture Corner items and end with a Valley Vignette about an unusual art show by people with dementia. Above, an example of the art with the display card; click on it for a bigger view. 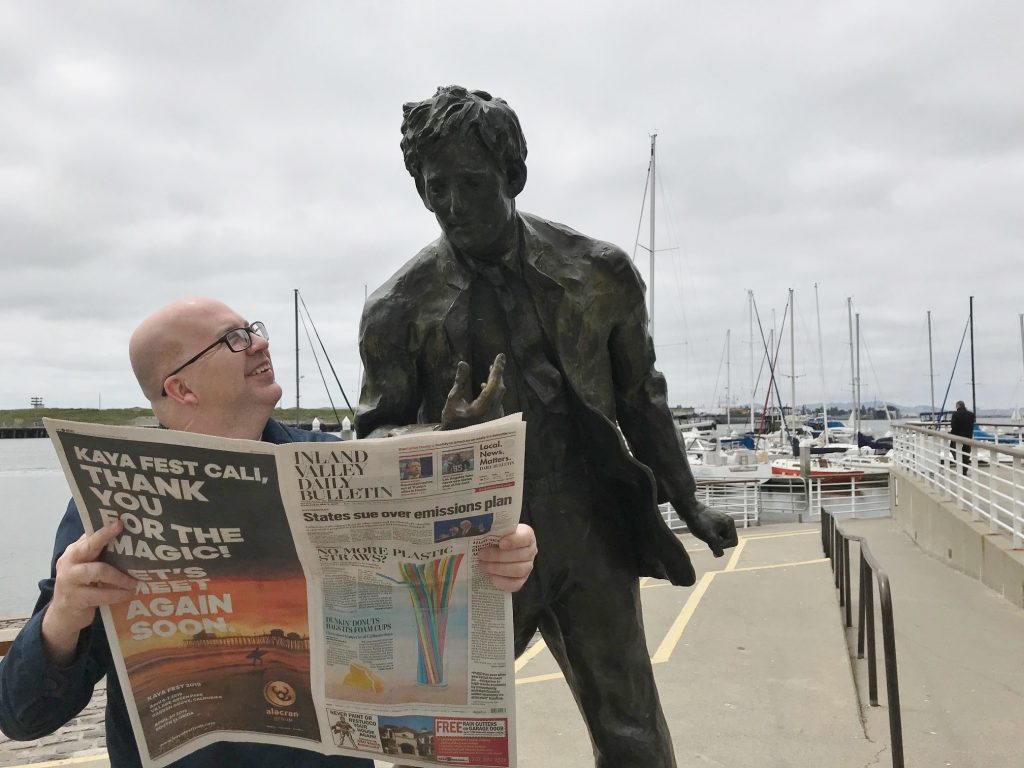 At Oakland’s Jack London Square, the writer reads my Daily Bulletin over my shoulder. 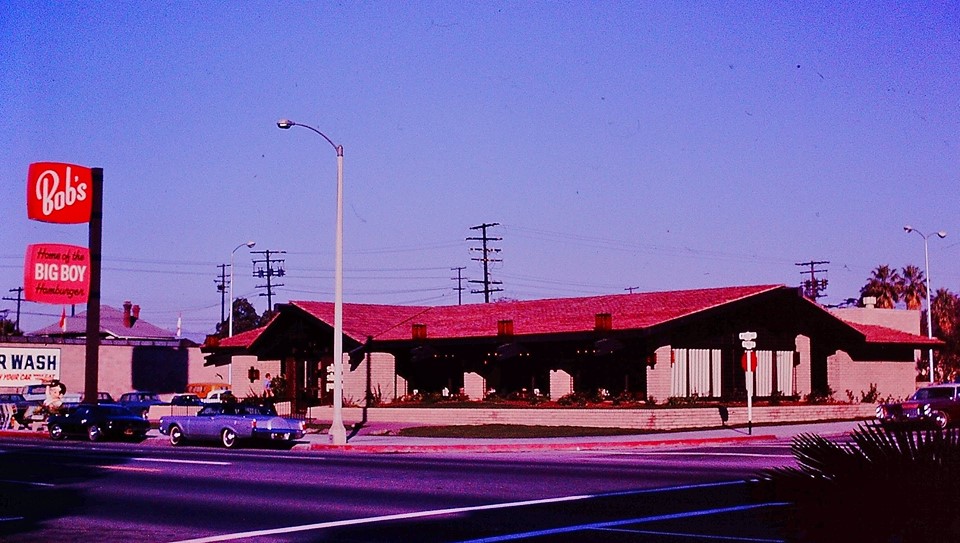 Above is the Bob’s Big Boy that operated in Pomona at 221 W. Holt Ave. at Main Street. The photo comes from the redoubtable Darin Kuna at the Growing Up in Pomona Facebook page.

Here’s one from reader Bill Marino, which he shot circa 1970. Big Boy has a nice glow about him. 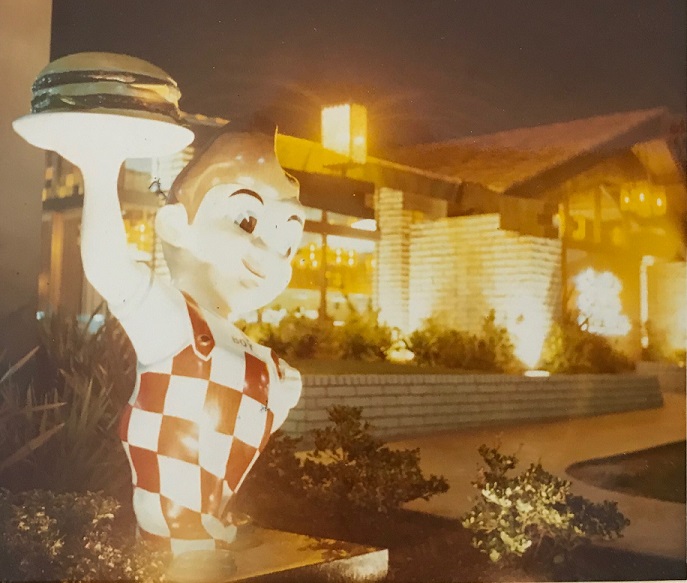 I couldn’t determine when this Bob’s opened. It closed in 1995. It went through several tenants after that, including a stretch as a combination Chinese-Pakistani restaurant, Shalimar Garden, in the 2000s. That or Super China Buffet may have been the last tenant. It’s been vacant for five or more years.

Here it is in its current state. There’s a for-lease sign. 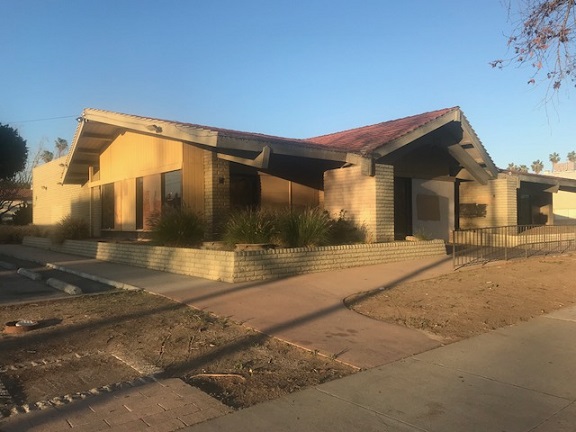 Any memories of the Pomona Bob’s, readers?

The small, 1960s chapel on La Verne’s Bonita Avenue is slated to be demolished late next year after construction of its replacement. I pay a visit and pay tribute in Sunday’s column. 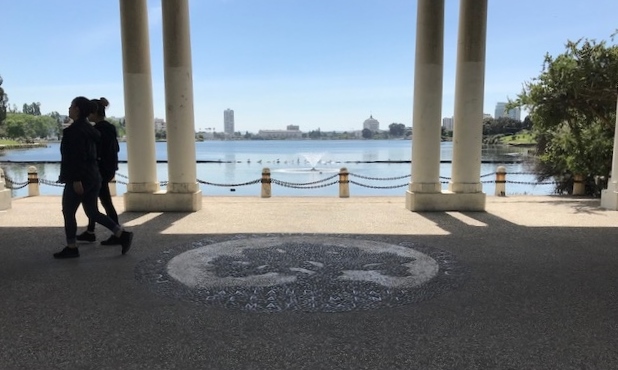 I spent three nights last week in Oakland, my first significant visit there. I liked it. It’s the subject of my Friday column. Above, Lake Merritt, the city seal embedded in the paving. 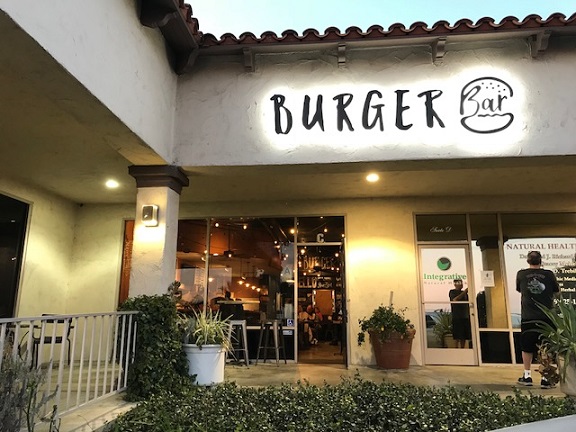 When the Meat Cellar moved a few blocks west to the old Wolfe’s Market, the former location was turned into Burger Bar under the same ownership. I wrote about Meat Cellar last week and may as well round things out by giving the same treatment to Burger Bar.

It’s been upgraded a bit, with a bar (obviously you need a bar at a place named Burger Bar) and local beers from No Clue, Last Name and nearby Claremont Craft Ales as well as red and white wines. The seating is a little better too, and there’s table service rather than ordering at the register.

The new Meat Cellar has an expanded menu. Burger Bar is more like the old Meat Cellar menu: sandwiches, burgers and a few entrees, like steak frites. Basically, my favorites are still served here in this quieter, more low-key (no valet parking, at least) restaurant. And there are some new items too. 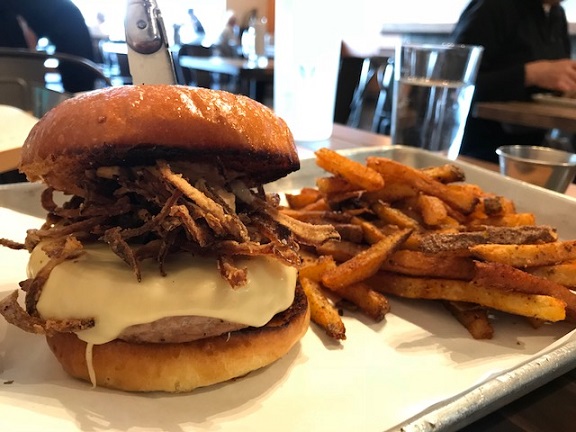 On my first visit, I had one of those new items, the turkey burger ($15). This was not what I had expected, frankly, being more like the “chicken burger” you sometimes see on a menu; this was a tightly packed disk of turkey rather than ground turkey that would closely resemble a hamburger in looks and flavor. The crispy onion straws helped relieve its monotony, but I would recommend they drop it from the menu.

As that’s not how I wanted this Restaurant of the Week to go, I decided to return before writing something. 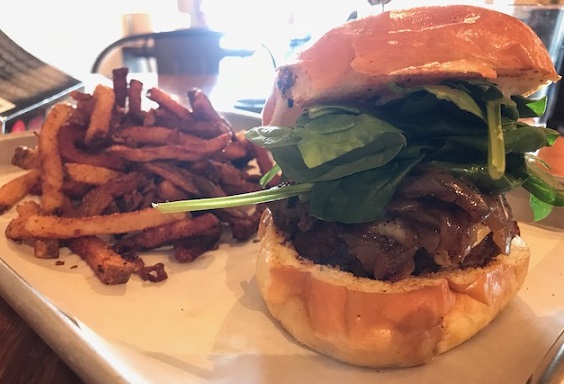 On my second visit I got a hamburger — in this case, splurging for the Wagyu ($18). This was more like it.

On the other hand, the guy at the table behind me complained about his burger being undercooked and said he had a Cordon Bleu degree. Compounding its evident flub, the kitchen made him the wrong burger for his replacement sandwich, for which management apologized and comped him. (I’ve had days like that too.)

I’m pretty sure I’ll return to Burger Bar, but a little less enthusiastically than expected. They may have a few kinks to work out yet. 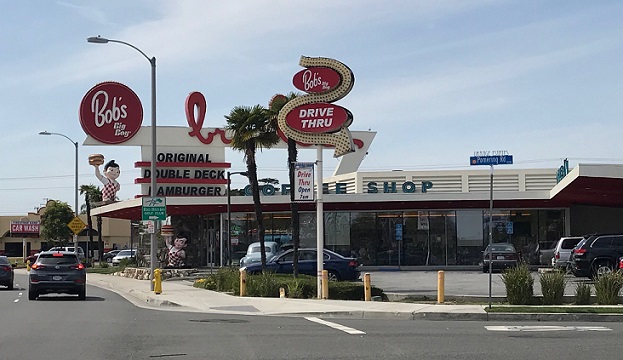 I made a special trip to the Bob’s Broiler in Downey — a classic coffee shop that the Bob’s Big Boy chain rescued — for lunch recently, and got not only a good experience but a Wednesday column out of it. Now that’s satisfying.

Has anyone been there, or know Downey? 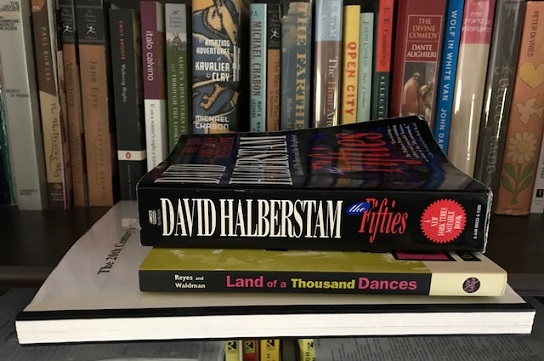 I spent the end of March and almost all of April on a single book: “The Fifties,” an overview of the decade by journalist David Halberstam. It’s 733 pages, plus notes and an index, hence the long reading time.

Halberstam makes a case for the ’50s being more interesting than they’re given credit for: a decade of consumerism and new suburbs, the expansion of leisure time, the fear of communism, the challenges to conformity (civil rights, the Beats, Kinsey, Elvis and more) and America’s awkward lurch toward superpower status. Because many of the people and events within were vaguely known to me, due to references in other reading or viewing, I found this fascinating, and as the sections tended to be just a few pages they didn’t amount to overkill. Filled with deft character sketches and colorful detail, it was surprisingly readable. But I wish I had a dollar for every time Halberstam describes someone as “shrewd.”

Off and on since March, I read “Land of 1000 Dances,” a history of Chicano rock from the L.A. barrios, starting with 1950s dance bands and continuing through Ritchie Valens, Thee Midniters, Cannibal and the Headhunters, El Chicano, Los Lobos and lesser-known bands and figures, often through original and candid interviews. Pomona gets a bunch of mentions as it was on the Chicano performance circuit that included El Monte, Paramount and East L.A. You’ll need a curiosity about the material and about rock history to read this, but I have those, and I found this rewarding.

“The 20th Century’s Greatest Hits,” which I had on my nightstand for a month or two and also managed to finish in April, is an unusual book in two ways. The high concept — an assortment of movies, music/concerts, art, writing and more are chosen to represent the peak of a century’s culture — seemed like a millennium-ending gimmick, and with idiosyncratic choices: “Two-Lane Blacktop,” “Things We Said Today” by the Beatles, “Old Path White Clouds” by Thich Nhat Hanh. I put off reading it for nearly two decades. But Williams proves to be a good guide, exploring the randomness of not only his picks but of how art comes to be, and not taking it too seriously. He even includes “Ulysses,” which he hadn’t read, to stand in for those great works we always intend to get to, but don’t. Ha ha!

Making my lapse in reading it all the more shameful, I was among the patrons who gave the author $25, I think, to finance its creation. Williams was not only a pioneering rock critic, he was a pioneer of the Kickstarter concept with this and a subsequent book. “20th Century” was then published by a legitimate publisher, but my copy is the signed, bound printout given to patrons.

How was your April, readers? We’re all anxious to find out.

Next month: a bit of Benchley, and more. 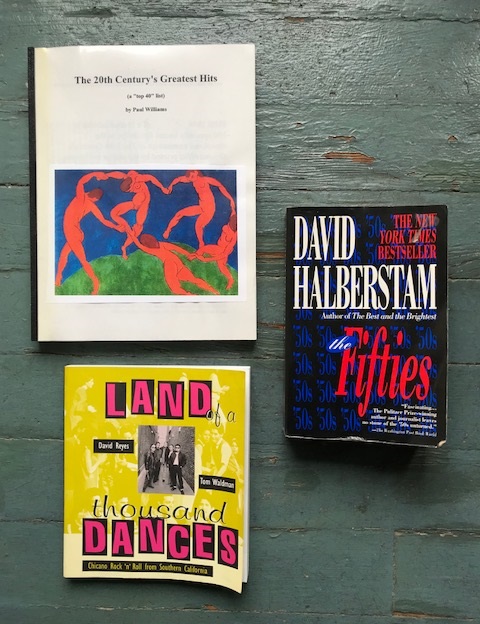 I’m a fan of the Planet of the Apes, so when I heard about a 50th anniversary exhibit in LA for the franchise, I had to check it out. Having checked it out, I had to write about it. That’s Sunday’s slightly silly column.

A reader told me in 2007 about a local reference in a Joseph Wambaugh novel, but she gave me the wrong page number and I couldn’t find it. Until now, when I finally read the whole book. I start Friday’s column with that, followed by a recap of my Ontario movie series, some Culture Corner items and a Valley Vignette.