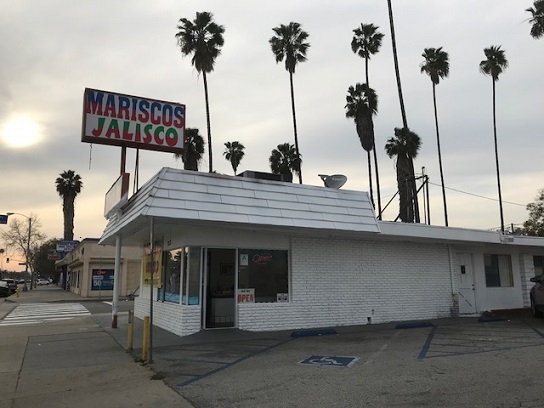 The arrival of Mariscos Jalisco in Pomona in mid-March was excellent news for foodies, as well as for anyone who appreciates cheap eats and Mexican-style seafood. The restaurant, the celebrated Boyle Heights’ food truck’s first brick and mortar spot, was written up in my column, which included an interview with founder Raul Ortega.

But as it would seem like an oversight not to make Mariscos Jalisco a Restaurant of the Week for my blog, listed alongside other Pomona eating places, here it is. 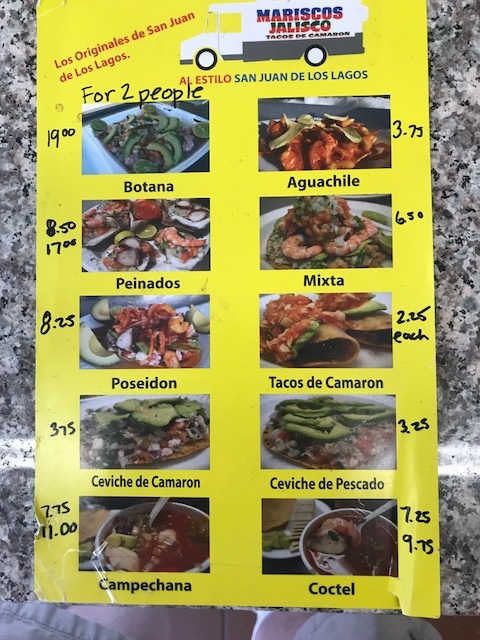 There’s a limited menu, all seafood-based. Don’t go in thinking you can order a chicken burrito. As there are only 10 items, I had some thought of trying all 10 before writing something. I didn’t get quite that far, as you’ll see. 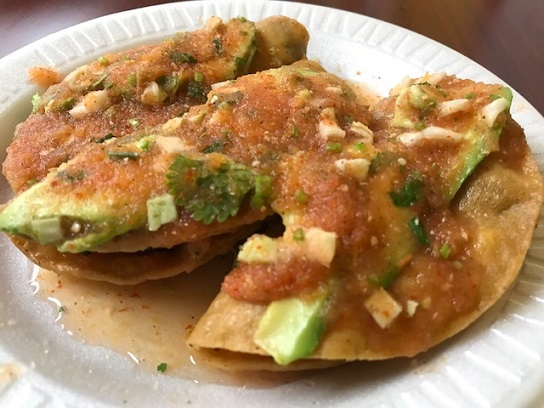 The shrimp taco is the must-have item. You order them individually, and so on some visits I’ve had one, plus a second item, like the campechana, a seafood cocktail with shrimp, octopus, oysters, fish, onions, tomatoes, avocado (virtually every item here uses avocado), and eaten with a spoon or on a tostada, or the coctel, pictured second, which is the above but without oysters. I enjoyed both. 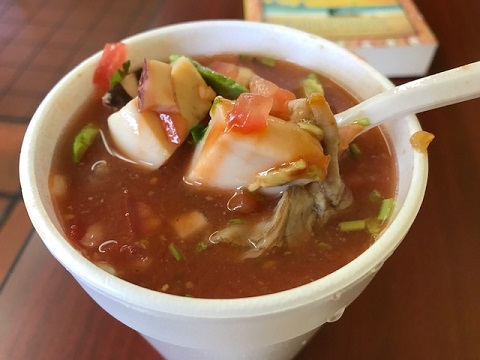 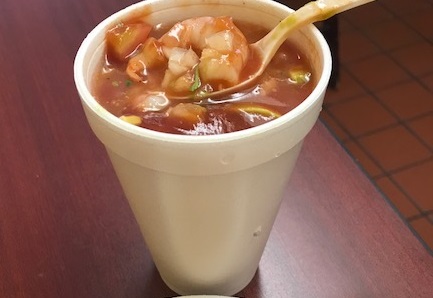 I’ve had both ceviches, seafood, below, and shrimp, which I can’t find my photo of. 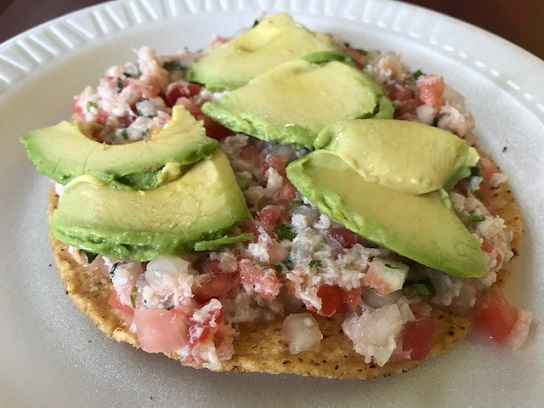 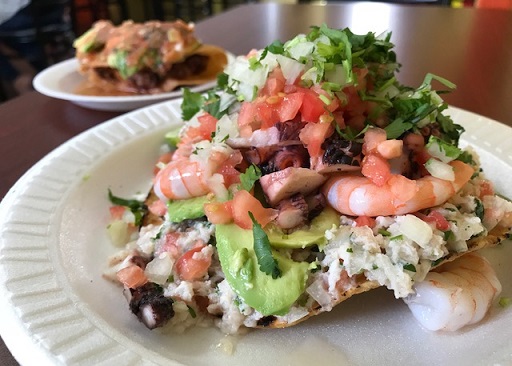 Above is the mixta, a ceviche with shrimp, fish and octopus. All the ceviches are chilled and refreshing.

Finally, I ordered the Poseidon, basically the mixta but with aguachile. It’s spicy! I was crying and blowing my nose and using up a dozen napkins in the process. 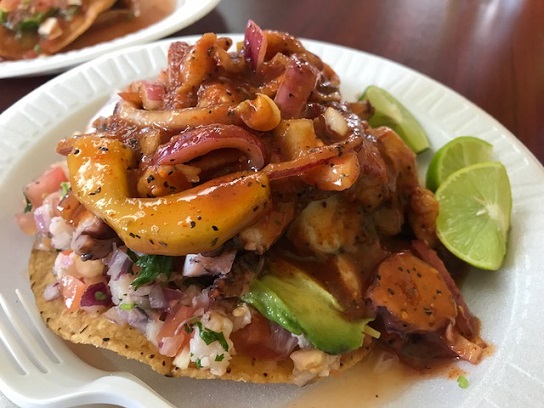 So I can’t see myself ordering the aguachile on its own, foiling my thoughts of trying all 10 items.

Or can we pretend I had the aguachile, since here it was atop the Poseidon? Hmm.

The other two untried items are possibilities: peinados, which looks from the photo like a seafood assortment, and a botana, the menu’s priciest item at $19, and meant for two people. I’m not sure what it is from the photo. A friend owes me a meal there after I had to pay for hers when she didn’t have cash (the restaurant has since begun taking cards), so I could always try persuading her to get the botana.

Or I can just continue happily eating a taco or two a week, with the occasional ceviche or cocktail to mix things up.

Business has been good, but not explosive; I haven’t encountered a line longer than four people, although I haven’t tried going during a traditional lunch hour. So don’t be deterred, but also bear in mind the early closing time. Below is the small dining room shortly after my column was published. It was nice to see the place full, whether or not I had helped. 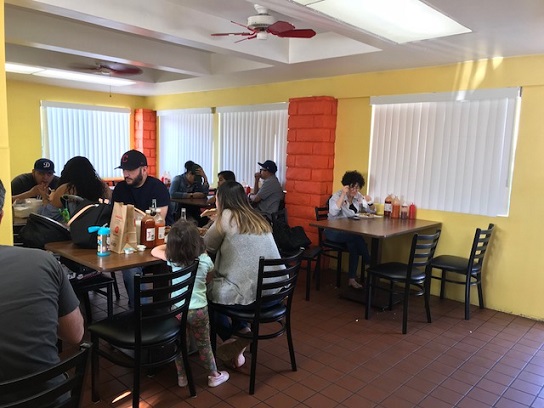 On May 20, 1968, Robert F. Kennedy campaigned in Pomona and Ontario. He visited Fontana on May 29. I delve into those visits for Wednesday’s history-drenched column. Above, Kennedy shakes hands on the Pomona Mall; photo taken from the Claremont Courier’s bound volumes. 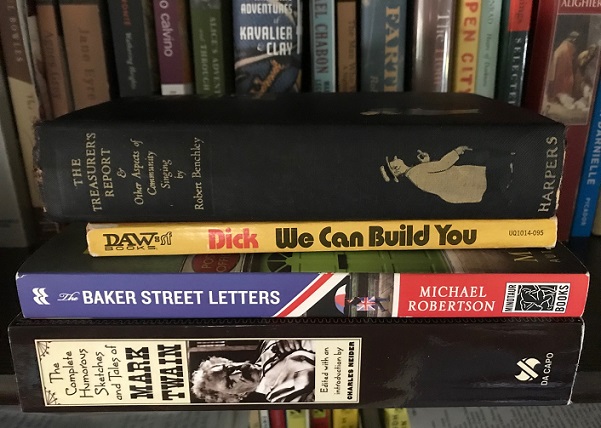 Regards, readers! May was a four-book month for me. (I wonder if there’s a shorthand for that, like: “May was a four-booker.”) These were all books I’d had for a while, and one of them I’d been reading, off and on, for eight years. Yikes!

That would be the Twain “Sketches” collection, all 700-plus pages of it, which a search of past Reading Logs reveals in my “acquired” list from April 2010. (That month was a four-booker too, I see.) I bought the book at Borders, finding the cover and concept appealing, and knowing I’d read a handful of the pieces thanks to an overlap with a couple of Twain short-story collections made me think the book would be a relative breeze. After all, I’d already started it in a sense.

I read a little here, a little there, and as large sections were culled from his travel memoirs, I would halt until I’d read the original text — why spoil the full books? Probably one-fifth of “A Tramp Abroad,” which editor Neider has championed, appears here, and getting to “Tramp” took a few years. Anyway, I finally polished off the last 150 pages in May.

I love Twain, but this was really too much, showing that completism has its drawbacks. Some of the pieces are just too dated or marginal; even Twain had cut a few of them from later reprints of his books. I was relieved to have finished it.

As for “We Can Build You,” the idea of setting an ostensible science fiction novel at an electronic organ factory in Boise, Idaho, is pretty hilarious, and in keeping with PKD’s down to earth, unheroic novels. The factory is creating a robot, a simulacra of (why not?) Edwin M. Stanton, Lincoln’s secretary of state. Lincoln himself soon follows. The Lincoln fan in me was surprised and delighted.

But as with PKD’s “Clans of the Alphane Moon,” a promising situation (comedy) is allowed to fall away, in this case to focus on the narrator’s psychotic break due to his obsession with an uncaring woman. I’m not sure another PKD novel goes off the rails quite like this one does. But it’s never dull.

In “The Baker Street Letters,” two brothers whose law office is at 221B Baker Street, London, solve a mystery sparked by a girl’s letter to Sherlock Holmes, who despite being fictional, and more than a century removed from today, is still getting mail from would-be clients daily near the 21st century. It’s a cute premise for a story that has almost nothing to do with Holmes, and which largely takes place in contemporary Los Angeles. It’s an enjoyable trifle and the first in a series.

It’s worth adding, perhaps, that I read “Letters” after a brief attempt to read a sort-of “cozy mystery,” as they’re called, called “Granddad, There’s a Head on the Beach,” set in Thailand. I read the first 30 pages, narrated in too cute a tone — scattered, silly — for my tastes and gave it up. By comparison, “Letters” was straightforward and focused. I don’t know that it’s a great series, but there are a few more, and I might pick up the next one sometime.

Every year I read a Robert Benchley book. This year’s was “The Treasurer’s Report,” whose title essay is a written version of a performance he did as part of a Broadway revue and also memorialized in a short film. It’s cute on the page, but not the highlight of the book, which is above average Benchley. While sometimes the humor or topics have dated, the majority of the essays remain witty and delightfully silly. The next to last one, about trying to puzzle out how little ships are put into bottles, had me laughing aloud, and it wasn’t the only one.

Still, if you haven’t read Benchley, let me suggest “The Benchley Roundup,” a best-of that has most of the prime material — but not all of it, as the ships-in-bottles piece isn’t there. But it’s all the Benchley most people will need.

When and from where did these books enter my life? Twain I already told you. “Build You” is probably from the early 1990s, but its precise origins are lost in the mists of time. “Baker Street” (and the discarded “Granddad”) came from the now-defunct Big Sleep Books, a mystery specialist, in St. Louis in May 2013. As I bought only two books at Big Sleep, both the same day, I have now taken care of that. (Except that, ugh, the majority the nine books I bought that month are still unread.) The Benchley was bought used somewhere in the mid-2000s.

So that’s my May. How was yours, readers? Let us know in the comments.

Next month: doors and rooms. 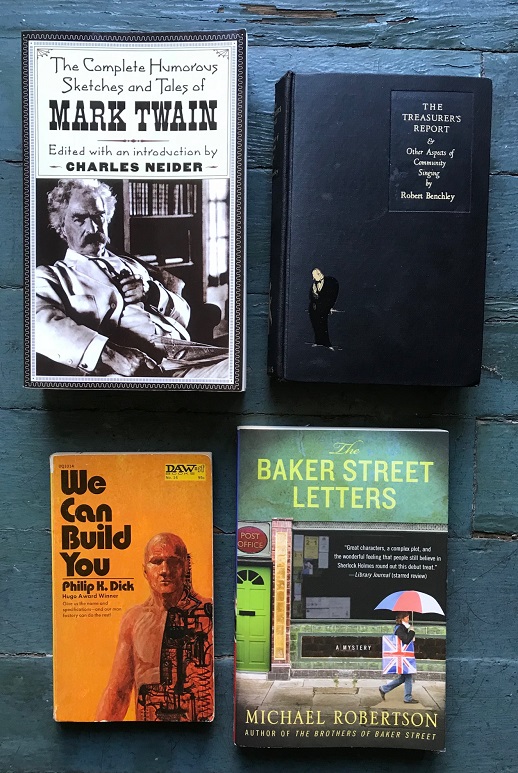 A building in downtown Ontario got a historic marker last week. The building’s owner, a pawn shop, restored the 1917 structure. I write about that in Sunday’s column, as well as about meeting astronaut Alan Bean in 1999 in Rancho Cucamonga.

In a rare visit these days to the Upland council chambers, I attended Tuesday’s City Council meeting to watch the council majority censure one of their colleagues. Drama, thy name is Upland. That story is told in my Friday column.