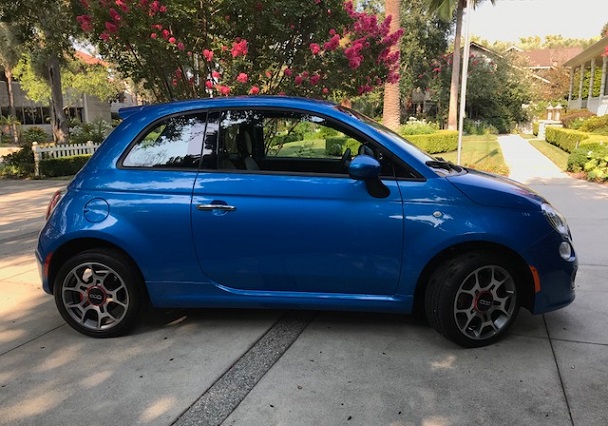 Sorry to have missed Sunday’s column, but I took Friday off to take care of my car situation. I bought a used Fiat! And, whew, returned my rental before the deadline.

Over the weekend, I dealt with all the paperwork, insurance, etc., and sorted through all the stuff pulled from my Mini Cooper (RIP) before taking what was necessary to the Fiat. I didn’t carry much in my car, but it’s still a lot when it’s spread out on your living room floor.

This also meant picking up and sweeping teeny bits of broken auto glass that had festooned my items, especially my umbrella with all its folds. That stuff is pesky; even this morning, after all the cleanup, and post-cleanup, I spotted two more little pieces.

I checked out a show of eight 1940s paintings at Ontario’s Chaffey Community Museum of Art that chronicle Kaiser Steel’s rise from a hog farm, “Pigs to Pig Iron.” It’s neat. That’s the bulk of Friday’s column, along with two Culture Corner items and a Valley Vignette. 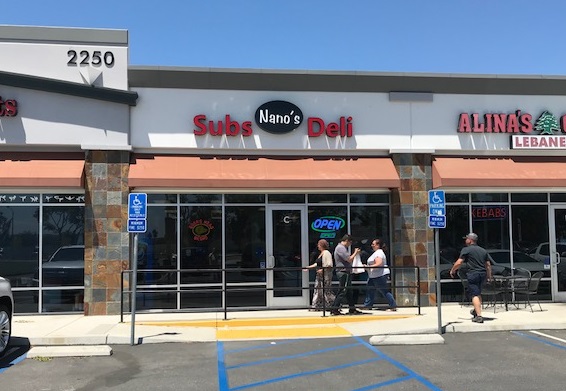 I rarely get down to South Archibald because from where I work, the airport is in the way. But two friends on two straight days (hi, David; hi, Nancy) told me about Nano’s Deli, which opened in May. So a few days later I invited a friend to meet me there.

Even though the Bulletin’s office is on Archibald, I had to head east to Haven, then head west on Philadelphia. At least that was the plan; by the time I got to Philadelphia, I forgot about heading west and hunted in vain for the restaurant. Realizing my error, I hopped on the 60 and got off at Archibald; the deli is in the first block above the freeway.

Nano’s turns out to be next to Alina’s, a Lebanese restaurant featured here in 2010. I liked it but haven’t been back just because of the logistics. Nice to see it’s still around.

It’s clean inside, if a little bare. Nano’s was doing good business with customers who probably work at nearby industrial and business parks.

You can build your own sandwich from a wide variety of meats, including eight types of turkey, six types of bread and nine kinds of cheese. They use Boar’s Head meats and cheese. There’s also some specialty sandwiches, hot and cold, and three salads. Basically, it’s virtually all sandwiches — plus an impressive variety of potato chips. 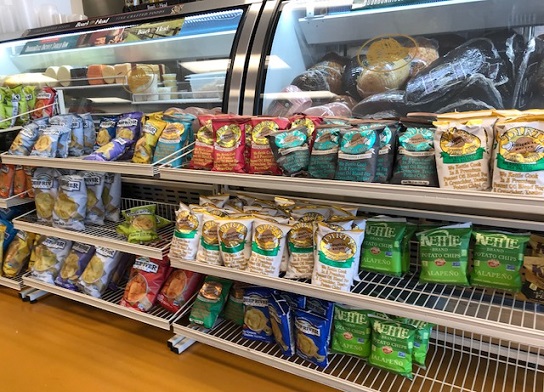 We got two of the cold specialty sandwiches: the submarine and the Nano’s 2 Meats, as combos with chips and drink ($12 each).

The sub had mortadella, hot cappicola,, pepperoni, salami and provolone; the two-meat had Cajun turkey (a little spicy), roast beef and American cheese, which, perhaps unpatriotically, we swapped out for Swiss. 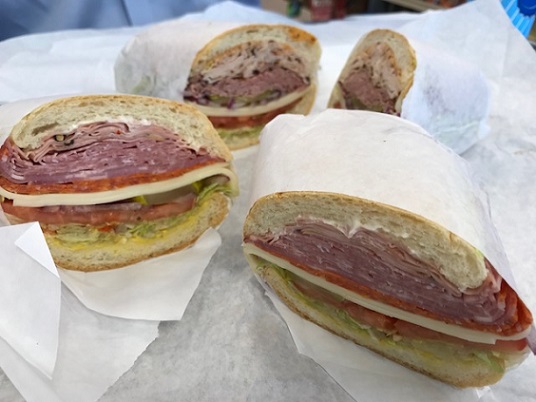 They were generous with the fillings. (That’s the Italian in front, the two meat in the back.) While we thought our sandwiches were fine, we were not wowed. Even with Cajun turkey, they were a little bland or generic. I felt like I should like the food better than I did.

By the way, on our way out I noticed a separate rack of potato chips on the opposite wall. This is like a Mecca of chips.

So, if you’re in the area or live or work around the 60, give them a try and see what you think. I’ll stick with my north of ONT sandwich shops — although I do want to go back to Alina’s. 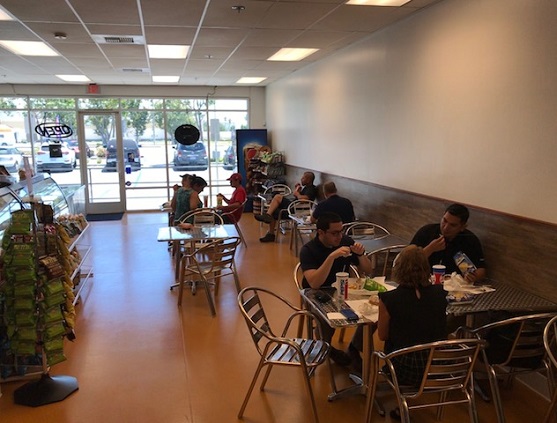 Diane Williams and Bill Alexander will leave the Rancho Cucamonga City Council after the November election. They’ve been in office a combined 54 years. I talk to them both for Wednesday’s column. (In a hometown touch, I ran into Williams at the drugstore and she gave me the story.) 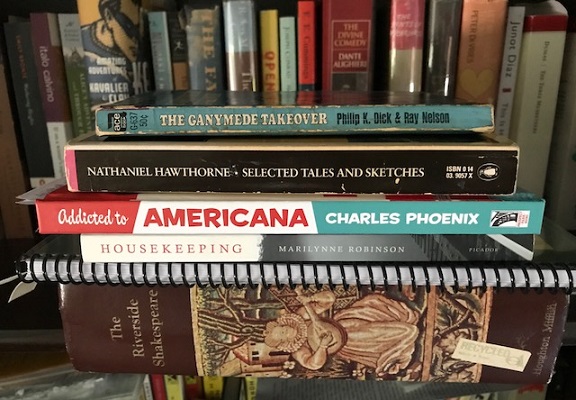 Six books read in July, although it may be difficult to tell that immediately from a glance at the photo. I read one play from the giant Shakespeare omnibus, and then there’s that funky book with spiral binding. That’s the one by Bob Smith.

“Housekeeping” (1980) is a much-praised novel, a Pulitzer and National Book Award nominee. It’s about two sisters who, after their mother’s suicide, live with their eccentric aunt in a remote town in (probably) Idaho. I expected to like it, having fond memories of the Bill Forsyth movie adaptation. But not much happens, the writing often struck me as overdone and the bulk of it was strangely uninvolving. I’m not comfortable passing a negative judgment on it, so let’s just say it wasn’t to my taste.

“Seven Lost Ranchos” (2018) is a coloring book (!) of local history regarding our very own Inland Valley by history buff and illustrator Bob Smith, author of “Redefining the Inland Valley.” I’m not sure how color-able the art is, or how much the topic might appeal to young people, although it may well help them out in their California studies. For the rest of us, the modicum of text does boil down the local ranchos and adobes into manageable chunks.

“As You Like It” (1599) is one of the lesser plays, a nearly plotless rom-com that I read in college but had zero recollection of. (I found a penciled note to myself in my college-era omnibus that showed I’d read it, but by the end, nothing had jogged my memory.) But it’s enjoyable enough, Rosalind is commendably sharp-tongued and after all this is the unlikely setting for the seven ages of man/”all the world’s a stage” speech — which turns out to be delivered by a doleful sap, evidence that Bill S. didn’t take it seriously.

“Addicted to Americana” (2017) is a kind of personal, guided tour to kitschy Americana sites past and present, led by author Charles Phoenix. He is photographed visiting (and mugging with) most of the still-extant monorails, mock rocket ships, ice cream stands and streamline diners, while also telling fond and funny anecdotes about tracking them down. A must for his fans (I’m one), and of course he gets points for being an Ontario native and local booster. Optional for those who want vintage images only or dispassionate history.

“Selected Tales and Sketches” (compiled 1959) collects work from 1837 to 1850. One of the first great American authors, Hawthorne sought to document its feel and attitudes, especially those of the Puritans, in his fiction and descriptive sketches. If you can accept his allegorical style, a bit alien to our modern idea of fiction, you’ll appreciate his depth. While I’m not displeased to have read this 440-page book in its entirety, it’s more Hawthorne than is strictly necessary. And the editor’s 40-page introduction, while erudite, could have been employed against accused Salem witches as torture.

“The Ganymede Takeover” (1967) begins after a successful invasion of Earth by sentient worms from Ganymede who are in the mopping-up phase. But holding Earth may be more difficult than winning it. Key territory: Tennessee! This is one of PKD’s weaker novels and one of two co-writes of his career. This potboiler nevertheless has its moments: the woman who becomes detached from humanity, the Kingfish-like oaf who may become king of the world, the conquering worm who inherits a collection of airplane models, the sympathetic treatment of race relations. It’s sometimes purposely absurd, and you can imagine Dick and Nelson trying to one-up each other, as in the scene when one of the ruling worms, armless of course, is helped into his “finest red-orange formal sack.”

So, it was kind of a hit or miss month, with no clear standout, but with some enjoyable reads. And some of these books had been hanging around for a while: My battered copy of “Ganymede” may date to the late ’80s, and “Selected Tales” was bought at Berkeley’s Moe’s Books in 1992. Sheesh. They’re among only a handful of books of that vintage still on my shelves unread. “Housekeeping” was bought during Borders’ closeout sale in 2011, Phoenix’s was obtained during a book signing at Graber Olives and Smith traded me his book for one of mine.

Let us know how your July was, readers, and we’ll see you here again in a month. (Due to vacation, the August Reading Log may be delayed until Sept. 10 or so, by which time we may all have forgotten what we read.) 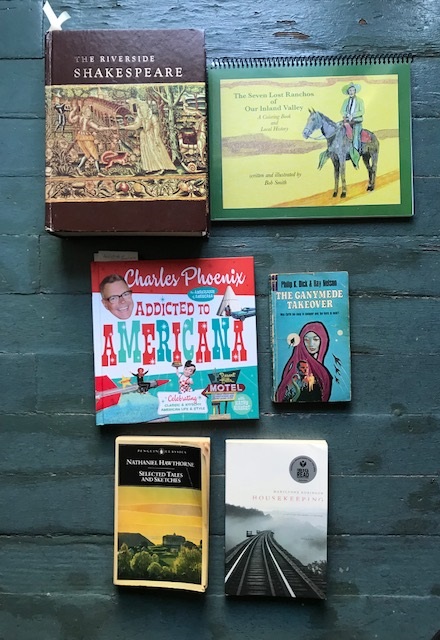 As you may have heard, I was in a pretty serious car accident last week, but survived intact. I tell that strange story in Sunday’s column.

For Friday’s column, I present some follow-up items regarding Pomona’s Lassie House, including the lone visit by Lassie, as well as  a Valley Vignette.

Due to unforeseen circumstances, I was out Wednesday and wasn’t able to produce a Restaurant of the Week post, sorry. Look for its return next Thursday.

Ellen Harper runs Claremont’s famed Folk Music Center, a music shop established by her parents in 1958. At 71, she’s released her first solo record. I like it. I profile her in my Wednesday column.