You may have seen the large, white, under-construction apartments visible from the 10 Freeway in Ontario, off Inland Empire Boulevard and just west of Archibald Avenue. Those are the Paseos at Ontario, which will boast 800 apartments in one-, two- and three-bedroom floor plans.

The developer is Geoff Palmer, a controversial figure around L.A. (It was one of his developments next to the 110 Freeway that an arsonist burned a few years back, for example.) LA Business Journal says he’s a polo-playin’ billionaire who collects, among other things, Marie Antoinette furniture.

Palmer was in attendance at Friday’s ribbon-cutting. I wasn’t, because as usual nobody thought to invite us. (City Hall is quick to tell us there’s not enough positive Ontario news in the paper, but as far as getting that news, apparently we’re on our own.) Still, a press release and photos were emailed after the fact. Anyway, the press-shy Palmer apparently didn’t speak during the event, so I didn’t miss out on a scoop.

Although the bulk of his business is in L.A. County, where he’s built some 10,000 units, Palmer also owns the Paseos in Montclair at Monte Vista and Moreno avenues.

I believe parking is on the first level with three levels of housing above, making the Paseos among the tallest apartment complexes in the valley.

Rent is $1,728 to $2,499 per month, too rich for my blood but surely within the budget of many. Best wishes to the Paseos. The Daily Bulletin is just down the street at 4th and Archibald, meaning we’re practically neighbors. I drive past every morning and evening. 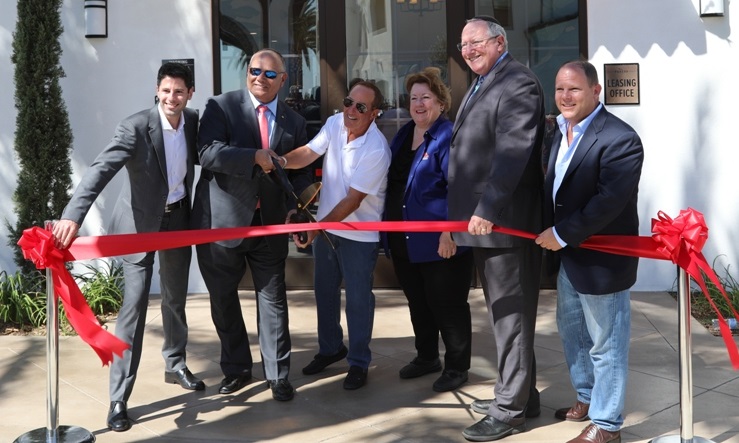