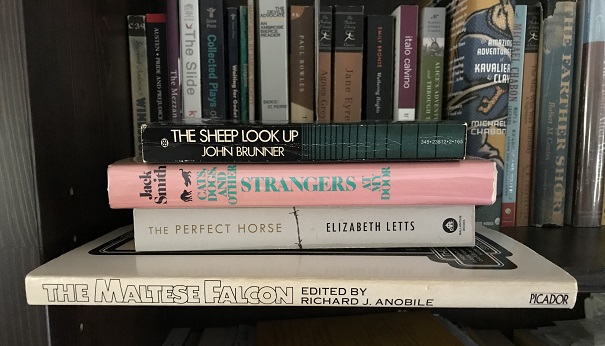 It seems it was September, not March, that came in like a lion and went out like a lamb, based on my animalistic titles last month. My reading encompassed a science fiction novel, a collection of newspaper columns, a nonfiction World War II account and a stills-and-dialogue version of a film noir classic, all with a critter in the title.

I’d been wanting to read “The Sheep Look Up” since being struck by its summary in a display at the science fiction museum at Seattle’s Space Needle in 2006, and remembered its unsettling cover from book racks in the 1970s. So that’s the edition I acquired a year or two later (from where, I forget). At 450 pages, it was a little intimidating and I kept putting it off, but I took it with me on my overseas trip and, after reading “The Trial,” read almost half by the time I returned.

This sprawling, character-filled novel (1972) charts environmental ruin (acid rain, unbreathable air, poisoned water, a sun that never emerges) that people manage to ignore even as their quality of life erodes. Experimental, but easy to follow, with black humor and real anger at the fouling of Earth. Brunner’s alarm about pesticides and antibiotics that no longer work hasn’t quite been borne out (yet?), but “Sheep” is still scary and deserves to be more widely read.

“Cats, Dogs and Other Strangers at My Door” (1984) collects some 30 years of columns by the LA Timesman about the cats, dogs and birds that found their way to his and his wife’s Mount Washington home. I love Jack’s writing but had some trepidation about this one, as a non-pet person. As the seventh of his nine books, which I’ve been reading in order, one per year, it was this one’s turn. But no need to fear. His clear writing, sly humor and observations about the foibles of both human and pet alike made this book another semi-forgotten gem.

“The Perfect Horse” (2016) chronicles the little-known tale of the purebred horses rescued at the end of WWII by equine-loving American troops before the Russians could grab them for horsemeat. Some of them were shipped, at least briefly, to Kellogg Ranch in Pomona before being dispersed to auctions in other states. I saw Letts give a talk at Cal Poly earlier this year, bought the book to help me with the resulting column and got it signed. I read the few Pomona pages in writing the column, then put the book aside. I wasn’t sure I wanted to spend the time on it, as it’s not really my thing, but thought if I were ever going to read it, it should be this year, and so I inserted it into this animal month.

Well, it was frequently quite good, with Letts playing up the drama and humanity of the men involved. But there may be too many characters, riding camps and breeds for the reader to follow for the narrative’s own good, and the story kind of trails off, as the dramatic rescue in many ways seems to be for naught. Life is often like that. Still, maybe I’d have been just as well off skipping the book after all. (Among the copious works cited in the back is my own Kellogg column from my Pomona A to Z series, although I can’t imagine it was of much help.)

As for “The Maltese Falcon” (1974), it’s one of a series done by Richard Anobile in which he presented portions of old comedies, or even full movies, as frame blowups accompanied by typeset dialogue. I have his “Casablanca” and two Marx Brothers books.

Now that we can enjoy “The Maltese Falcon” in our own home anytime we like — I’ve since watched it again on Blu-ray after finishing the book — this is an antique. But “Falcon” is such a great movie that the chance to linger over its details and chuckle in recognition of favorite moments is not to be dismissed. Also, you might learn something; in my case, despite repeated viewings, it was exactly how Captain Jacoby figured in, which had glided right past me.

I bought “Falcon” at Powell’s Books in Portland in 2016. As mentioned, “Horse” came from Cal Poly in 2018. “Cats, Dogs” and “Sheep” date to the mid-2000s, prior to the Reading Log, from used bookstores, although I’ve forgotten which ones. Smith’s, like my others by him, is signed.

How was your September, readers? Hope you read some good books, and not too many dogs. Let us know in the comments section.

Next month: a favorite author or two.