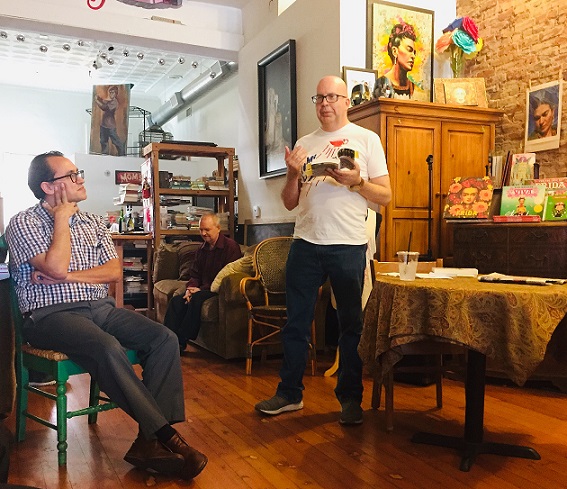 My book talk Sunday afternoon in the homey environment of Cafe con Libros in downtown Pomona drew an audience of 15, one more than my launch event at the Pomona Public Library. (If each event for “On Track” draws one more than the previous event, someday I’ll be at Staples!)

Above, Gustavo Arellano listens attentively as I read from my book, which collects the best of my columns from 2001-2005. The longtime journalist and author, best known for his previous gig writing an advice column called “Ask a Mexican,” and now an op-ed columnist in the LA Times, among other gigs, drove up to Pomona from Santa Ana, a generous gesture. He got lost, mistaking Valley Boulevard for Mission Boulevard, but he made it on time.

I didn’t give him away, although when he raised his hand during the question period, I said, “Is this ‘Ask an Anglo’?” “‘Ask a Gabacho,'” he corrected me.

Gustavo, by the way, contributed the flattering blurb for my book’s back cover: “David Allen is the most underrated columnist in Southern California. Anyone who doesn’t buy this book deserves exile to Orange County.” As he likes to say: “HA!”

I’m kicking myself, though, that I didn’t put him on the spot and ask him to do a dramatic reading of his blurb.