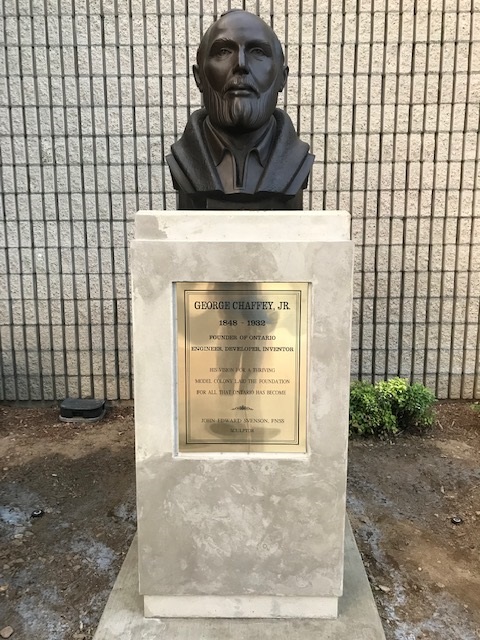 Anyone who wants an idea of what George Chaffey, the prime developer of Ontario and Upland, looked like has several options. Upland has a statue outside its city hall and Ontario’s airport has a relief inside Terminal 4. Both are by the late sculptor John Svenson.

Ontario has a new Chaffey image outside the Senior Center, a bust that was dedicated in September. It, too, was by Svenson, who died in 2016. He produced a maquette and plaster cast of Chaffey. It was, coincidentally enough, prominent in a Bulletin portrait of Svenson in his studio in 1998 and reused in his obituary. His son, David, bronzed and finished the bust and spoke at the unveiling about his father’s passion for local history.

Having the piece in the Ontario Civic Center, steps from City Hall, is a welcome reminder to the community of Chaffey’s role in the city’s founding.

Having heard it was there, I made sure to take a look, and a photo, on my most recent visit.