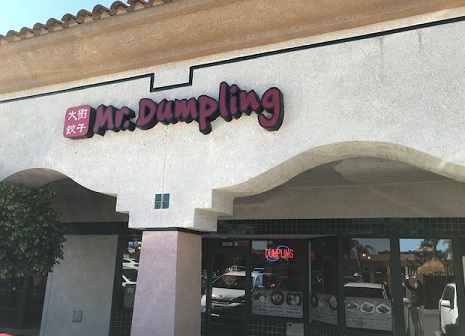 I was predisposed to like Mr. Dumpling, a Chinese restaurant in the center across from the New Kansan Motel, based on its name alone. Courtesy titles in business names are usually a winner. I would like to see a Mr. Dumpling mascot, perhaps a pudgy anthropomorphic dumpling wearing a smile and a rice hat.

Regardless, the restaurant had been on my list to try pretty much since its 2017 opening, and an opportunity recently presented itself when I was setting up lunch in Rancho Cucamonga with two friends. Let’s try Mr. Dumpling! 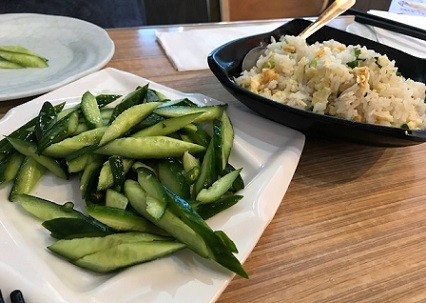 The double-sided menu has appetizers, soups and, naturally, dumplings, steamed, boiled or fried. We started with cucumber ($4), pickled and with serrano chiles, which we liked, although we sometimes avoided the chiles, and house fried rice ($4), with scallions and egg. 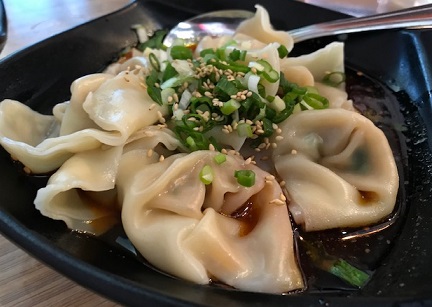 We also got pork wonton in chile oil ($7), another table favorite. 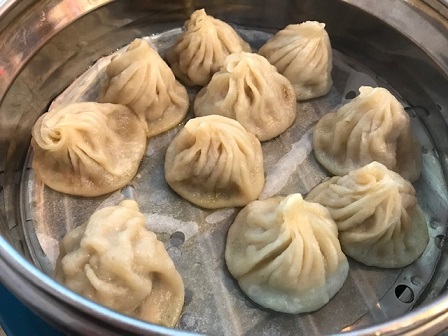 As for the dumplings, we got xiao long bao ($9), soup-filled pork dumplings of the type you would get at Din Tai Fung. These were not to those level, but they matched my memory of the XLBs at Min’s, also in Rancho Cucamonga. We also had beef and onion panfried dumplings ($9.45), which I unaccountably did not photograph. We liked those too.

Service was efficient but not especially helpful, as seems standard for Chinese restaurants. The dining room is enlivened by a wall-length mural by the co-owner.

I enjoyed the meal, as did my friends. I’d rate it among the better Chinese restaurants in the city. “For dumplings I’d definitely come back,” said one. “They needed to have those little spoons for us,” chided the other, referring to the soup spoons that usually come with XLBs.

And then in writing this post I reread our restaurant critic’s review and learned that there is evidently a sauce station opposite the kitchen with sauces, oils, black vinegar and slivered ginger for our dumplings. I did wonder why we didn’t get black vinegar and only a, well, sliver of slivered ginger. Maybe they had soup spoons there too. But no one told us it existed. 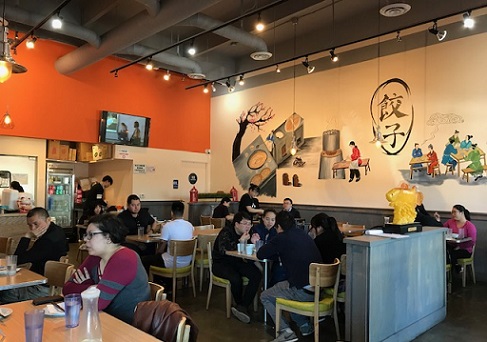