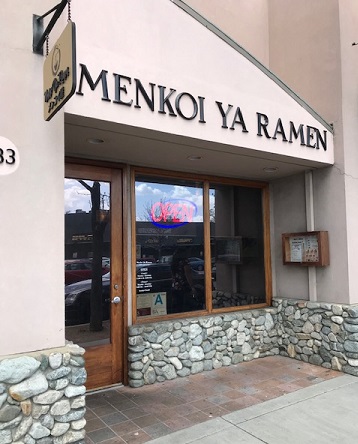 Menkoi-Ya was the first ramen specialist in Claremont, opening in January 2018 in the former Full of Life Bakery storefront. Since then, Ramen Lounge has opened a block away. I liked Ramen Lounge fine, even if the skater decor and casual service would repel a ramen purist.

Having been there, it was time to try Menkoi-Ya, which I did during my recent staycation, walking in for lunch one early afternoon. (Note the hours above; they close between lunch and dinner.) It’s a much more traditional environment with paper lantern-like lampshades, forest green walls and a wall-length mural. The music was modern alternative pop, but not too loud, and service was noticeably calm and polite.

The menu has appetizers, rice bowls and nearly a dozen styles of ramen. Most have a pork broth, but there are a couple of vegetarian versions. 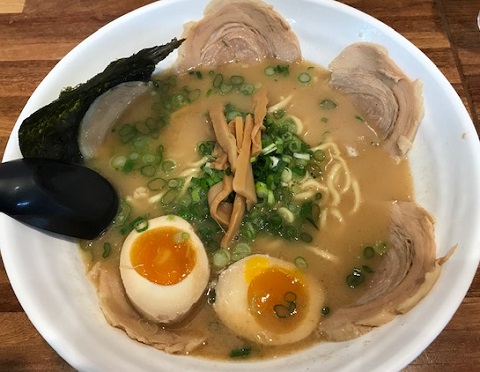 I got the house Menkoi Ramen, with pork broth, shoyu base, toro chashu (slices of housemade pork belly from a sort of loaf), takasuimen noodles, green onions, dried seaweed and bamboo shoots ($8.50), plus a soft-boiled egg ($1).

The broth was subtler than at Ramen Lounge, and the noodles, made fresh, are stretchy, chewy and crinkled. For all I know the chashu was excellent for its type, but I didn’t think the pork added much to the experience, and I’m a pork fan. Still, this was a tasty, filling bowl of ramen.

One advantage of sitting at the counter, as I did, is that you can’t be observed fumbling with your noodles or chopsticks. In fact you’re looking at a short wall, unlike at an American-style counter. I actually handled the noodles fairly well. Having been an occasional customer at Full of Life, I recognized that where I was sitting was essentially where I used to stand to place an order of breakfast granola. Ah, nostalgia.

I liked Menkoi Ya and would return, in part to try one of the rice bowls but perhaps for another bowl of ramen. 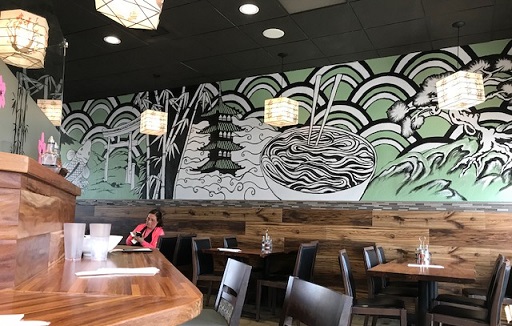