I round up some reader comments on some Midwestern-ish recent topics: the St. Louis Cardinals, St. Louis itself, frozen custard and Chicago hot dogs, all in Friday’s start-of-the-Labor-Day-weekend column. 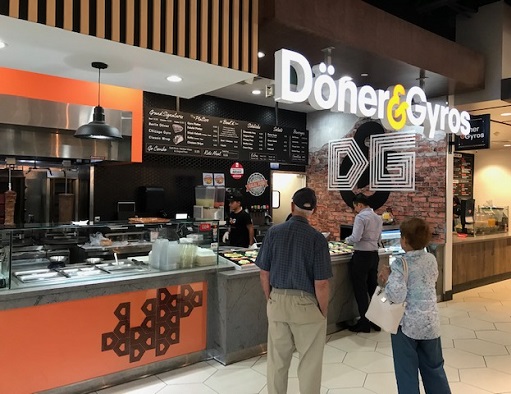 At Montclair Place mall last month for a morning event, I decided to eat lunch before leaving. A trip up the escalator to the Moreno St. Market food court revealed a new-ish spot, Doner & Gyros.

Gyros are a longtime favorite; it’s typically a mix of lamb and beef, cut from a spit and placed in pita bread. It’s the Greek version of the Turkish doner kebab, which is likewise sliced from a vertical rotisserie. Doner really has been popularized by Berlin, which has a lot of Turkish immigrants and which turned doner into go-to fast-food meal.

Upland had SpireWorks, which didn’t last. Montclair may be the only other Inland Valley city with doner. Intriguingly, Doner & Gyros is based in Dubai, where it has multiple locations, and just two so far in the U.S., with Montclair being the first and Houston the second. (Reader DebB left a comment nine months ago on my SpireWorks writeup saying she’d just been to Doner & Gyros. She is far ahead of me.)

Styles are Chicago gyro, Berlin doner or classic wrap, with beef, chicken or falafel as choices. They also sell salads and bowls.

The pocket-like bread was similar to SpireWorks but otherwise unlike any pita bread I’ve ever had, thicker and chewier with rough edges. The gyro meat came alongside lettuce, tomatoes and onions. It was perfectly acceptable, although to be honest I ate it without really thinking about it. The flavors just didn’t stand out to me. It’s possible the halal meat didn’t have a lot of flavor or simply that I was too hungry to care. But give the sandwich this, it disappeared soon enough. The double-fried fries were crispy and pretty good.

Unusually, an employee (the manager?) came out to the communal seating area and checked her customers. She asked me what I thought and if I had any recommendations. I didn’t have any ideas, but as a customer I was a little surprised to be asked. 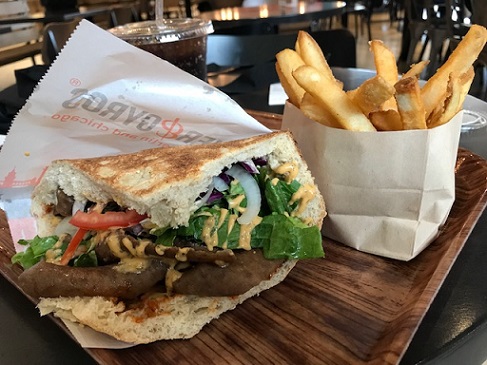 I moved to Claremont in the summer of 1999. Well, time has rolled by and 20 years later, I’m still here. I write about good ol’ Claremont, and how long it can take to establish yourself there, in Wednesday’s column. 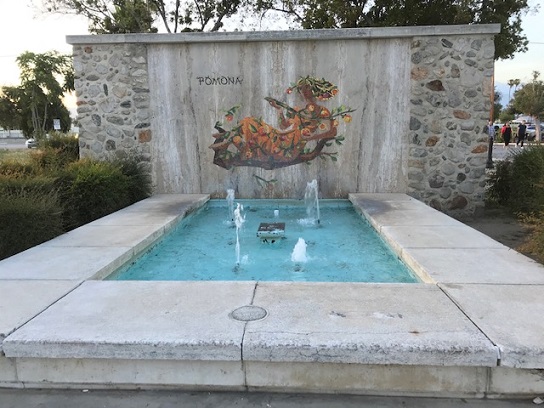 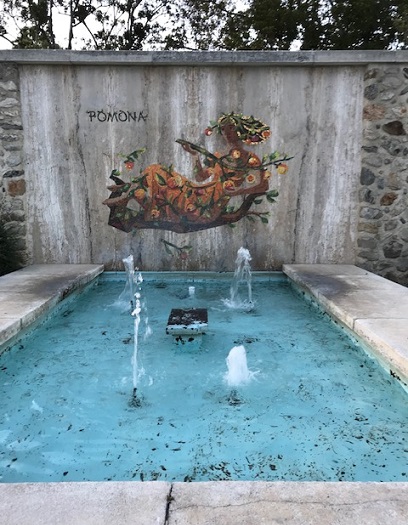 Five fountains were installed by Pomona in 1962 as part of the 2nd Street makeover for a pedestrian mall, and four have survived. (The fifth, at Thomas and 2nd, was removed circa 1999 to make way for the Thomas Street Plaza.) All have art by prominent local artists thanks to Millard Sheets, the artist, teacher and designer who laid out the pedestrian mall and wanted to add beauty to people’s lives.

Here’s one of the fountains, produced by mosaic artists Jean and Arthur Ames and featuring the Goddess Pomona. It’s at 409 W. 2nd St., north side of the street.

City Hall is requesting proposals to clean and repair missing or broken elements of the four fountains at a cost of up to $230,000 total, as my colleague Liset Marquez recently reported. It’ll be nice to see them get some TLC.

This post has been updated to reflect the fifth fountain. 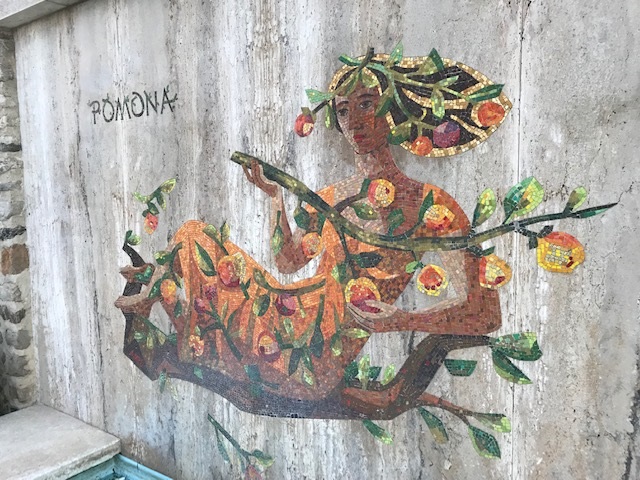 Because almost all reader comments for my Rolling-Stones-at-Swing-Auditorium column were squeezed out last week, I was planning a follow-up for Sunday. I wrote a few paragraphs Thursday before I headed home. And then, greeting me Friday morning was a most excellent email, plus two vintage photos, that elevated the whole effort. Read how an 18-year-old girl in San Bernardino helped turn the city on to this unknown band from England in Sunday’s column. 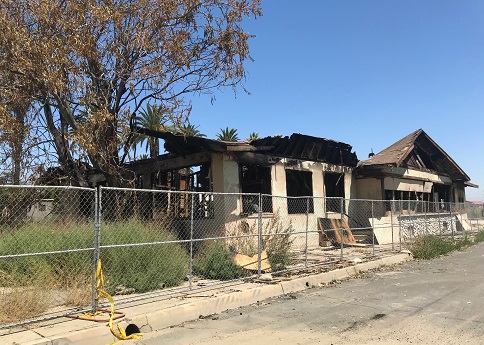 It was once a busy, prominent building, next to Ontario’s largest private employer. But after the Hotpoint factory closed in 1982, its clubhouse, where employee functions had taken place since 1917, began its slide into obscurity and neglect. In the early morning hours of Aug. 14, it burned down, cause currently unknown. I write about the building and its history in Friday’s column. 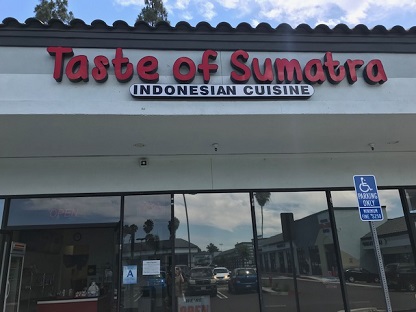 Indonesian food is represented locally, but you have to know where to look. I was aware of only Cross Court Cafe in Pomona (located inside a badminton club) and Java Bistro in Rancho Cucamonga. Then a friend tipped me to Taste of Sumatra, open since May 2018 in a service center in Upland at Grove and Foothill. He said his Indonesian-American wife approved.

It took me a while to get there, in part because of the funky schedule: closed Tuesday and Wednesday. But eventually I made it in for lunch on a Monday. (The owners must be those rare souls who think, “Thank God it’s Monday.”) 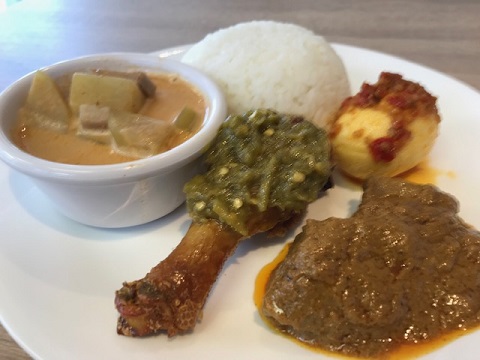 It’s sparsely decorated, and of course the menu is full of unfamiliar combinations of vowels and consonants, but there are descriptions, not always complete concerning ingredients, plus photos on a page of “popular dishes.”

My friend had the nasi padang ($12, pictured above), a combo with chicken, beef rendang (a type of curry), potatoes with yellow curry, a spicy hard-boiled egg and rice. He liked the chicken and the egg, didn’t like the curry, while saying he’s not really a fan. 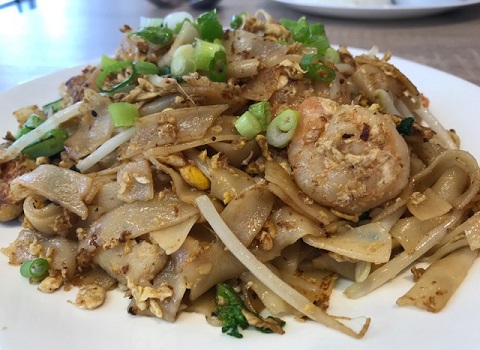 I had the kwetiau goreng medan ($12), the Indonesian equivalent of the Thai staple pad see ew, with flat rice noodles, chicken, shrimp, bean sprouts, egg and green onions. I liked it.

It’s always inspiring to see mom and pop restaurants like Taste of Sumatra that satisfy a small niche we might not know existed out here in suburbia. 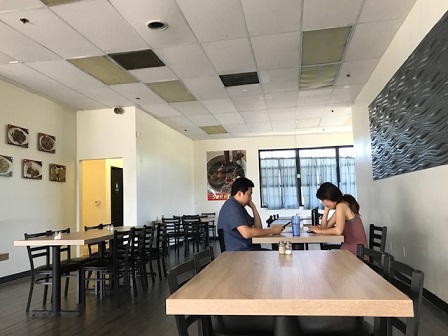 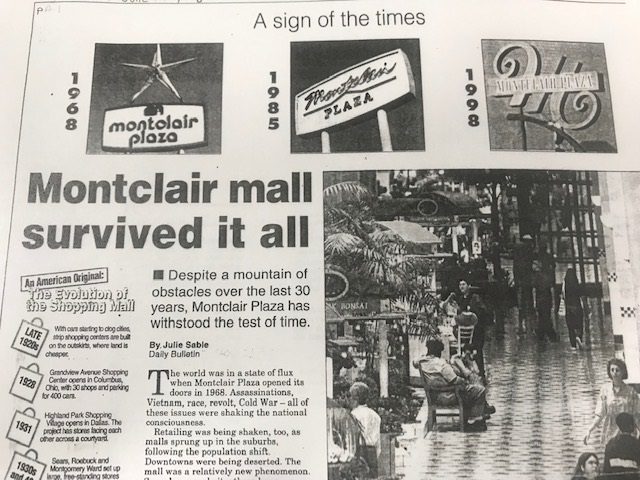 I revisit the Montclair Plaza sign, which came down last Friday, by rounding up some reader comments, determining that the sign wasn’t quite as old as originally stated and, going farther back, noting the Christmas star that was placed on the original sign annually. That’s all in Wednesday’s column, along with a Valley Vignette from neighboring Upland. Above, a portion of the story photocopy referenced in the column that has the sign images, the middle one being the almost-forgotten mid-period sign.

It’s a famous piece of rock lore and local lore that the Rolling Stones, who of course are from England, made their American concert debut in, of all places, San Bernardino. With the band performing this Thursday in Pasadena at the Rose Bowl, the timing seemed right to investigate. I may have pieced together the definitive account, and it’s in Sunday’s column. If my account is not definitive, it’s at least the most recent, right?

A panel last weekend at the School of Arts and Enterprise in downtown Pomona for the Arts Colony’s 25th anniversary was a chance for participants to tell stories about the last quarter century, but also about the pre-Arts Colony days, when downtown was a kind of no-man’s-land. I share some of those stories, with some follow-up questions, in Friday’s column. Above from left, Joshua Swodeck, Ed Tessier, Bill Moore, Phil Graffham, Marci Swett, Rebecca Hamm, Chris Toovey and Joy McAlister.