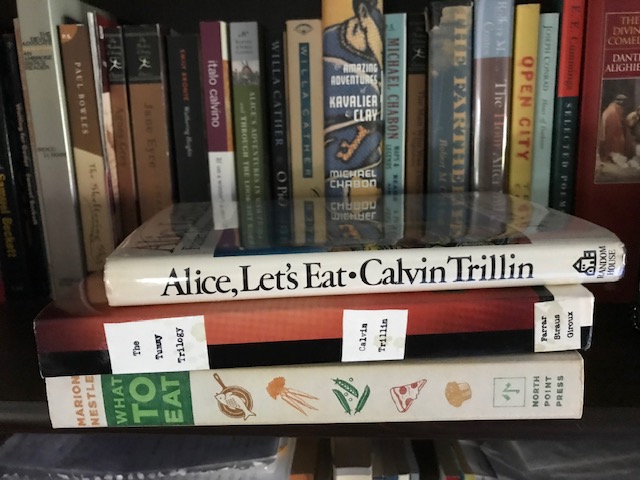 Happy September, readers! Welcome to our monthly books chat, here at the end of beach reading season. We don’t seem like a beach-reading-season crowd, but ehh, it seemed like something to say.

All the books I read in August had to do with food. How many books, though? It depends on how you count.

You’ll see four named above and only three in the photos. That’s because “The Tummy Trilogy” is, as the name suggests, three, three, three books in one. But when I bought it, I already owned one of the books individually, unread.

You could say accurately that I read two: “What to Eat” and “The Tummy Trilogy.” On my personal list of unread books, I listed all three “Trilogy” titles individually. So I’m saying, also accurately I believe, that I read four. To bolster my case, I switched from the “Tummy” paperback to the “Alice, Let’s Eat” hardcover at the appropriate time before returning to “Tummy” for the third book.

Book lovers will be arguing about this for years, I predict. (Note: Not really.)

“What to Eat” (2006): Fair and sensible advice by America’s best-known nutritionist based largely on what you’ll find aisle by aisle in your supermarket. Marion Nestle advocates for food with fewer ingredients, less added sugar and fewer chemicals; thus, in the scheme of things, Coke is better than no-cal versions, butter better than margarine. While I learned a lot in reading this, it’s also true that of the probably 10,000 facts in these 500-plus pages, I’ve retained about a dozen. But they may serve me in good stead.

“The Tummy Trilogy” (1994): “I’m a specialist; I just eat,” Trillin says of why he doesn’t cook. This collects his three books about food — published in 1974, 1978 and 1984 — all of which I found equally enjoyable. The New Yorker writer travels far and near to investigate catfish, crawfish, country ham, pan-fried chicken and other regional favorites, often with commentary from his wife and daughters, with frequent laudatory mentions of his native Kansas City. This is as much domestic comedy as it is food writing. His youngest’s finicky tastes inspired the last piece, “Just Try It.”

Will you let us know what you read in August in the comments? Provide your own count of your total, please. I’m worn out.

Next month: a few cc’s worth of titles. 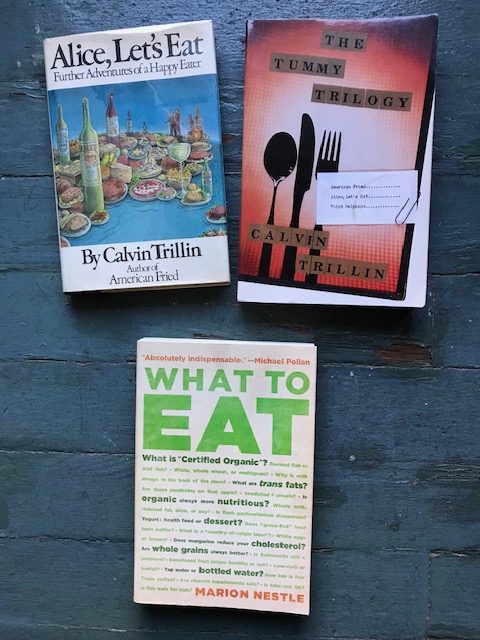