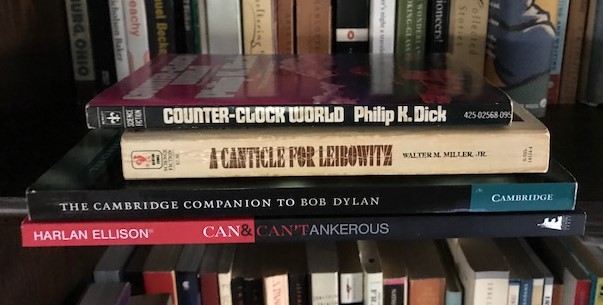 It’s not really c-c-c-cold, but I may as well pretend it is, the better to introduce my reading for September, all of them with titles that employ at least one C.

It came about like this: I wanted to read “Cambridge Companion,” and in fact had been slowly reading it on my nightstand all summer, while also desiring to get to “Counter-Clock,” one of the oldest unread books in my collection. (Not exactly unread, as I’d read and discarded an earlier copy in the early 1980s, but I’d been wanting to read it again as an adult who now loves Philip K. Dick.)

“Can and Can’tankerous,” a recent acquisition, fit the theme, and out of nowhere I realized so would “Canticle for Leibowitz,” which I’d owned for a decade and had had no plan to read. So, with a cackle, I added that C-book to the stack.

With that accounting, let’s get to the books.

“Cambridge Companion” (2009): Targeted to the college curriculum, this collection of essays about Bob Dylan is by design academic. For the rest of us, it’s definitely for the committed Bobhead. The first half’s thematic essays are often turgid, although Alan Light’s on Dylan as performer stands out. The back half, with commentary on eight albums, is much stronger, with Carrie Brownstein on “Blood on the Tracks” and Jonathan Lethem on “Infidels” (the reason I bought the book) being particularly good. Editor Dettmar is a Pomona College prof of my acquaintance, btw.

“Counter-Clock World” (1967): In the near future, time has begun running backward, which means the dead are returning to life in reverse chronological order. They include a black nationalist spiritual leader (think: MLK) whose return might upset society. There are serious concerns here about what exists beyond the grave, as well as a lot of hilarity about saying “goodbye” upon meeting, smoking cigarette butts back into full cigarettes, muttering “food” as a curse, wanting to eat in privacy and babies crawling back into the womb. Perhaps also a sign of the topsy-turvy world, the most powerful government agency is the library, which has commandos. Not in PKD’s first tier, but impressive and a personal favorite.

“Canticle” (1959): The conceit of a grocery list treated as holy relic makes for a compelling back-cover come-on, but the novel takes the matter of faith after a nuclear holocaust much more deeply and seriously. Thoughtful and well-written, this has flashes of humor, an ethical underpinning and a despair over the ability and willingness of mankind to destroy the planet.

“Can and Can’tankerous” (2016): A decent final book by Ellison collecting his 21st century output. I’d say two-thirds of the stories are entertaining, one-third weak. (I could have done without the Sarsaparilla Alphabet’s 26 brief, unrelated vignettes) I don’t know if Ellison was self-publishing for monetary or control reasons or because nobody wanted to work with him, but either way, it’s a little sad that a writer of his stature self-released this oddly sized, print-on-demand book. All that said, it’s an envoi to a long, remarkable career.

Have any of you read “Canticle”? I know Doug Evans has, and surely the absent Rich P. has as well. It’s the best book this month, although “Counter” was my favorite.

These books came into my hands as follows. “Counter-Clock” was bought by mail in 1994 from the legendary, and now defunct, The Other Change of Hobbit store in Berkeley. “Leibowitz” was bought at the likewise legendary-and-defunct Shakespeare & Co. in Berkeley in 2009. “Cambridge” was bought used in December 2018 from North Hollywood’s legendary, still in business Iliad Bookstore. “Can” was a Christmas gift, arriving this January via Amazon, an obscure online retailer with which a few of you may, perhaps, have dealt.

In other words, they arrived over the course of a quarter-century and were dispatched all in the same month. C-c-c-crazy!

Next month: books about Los Angeles. 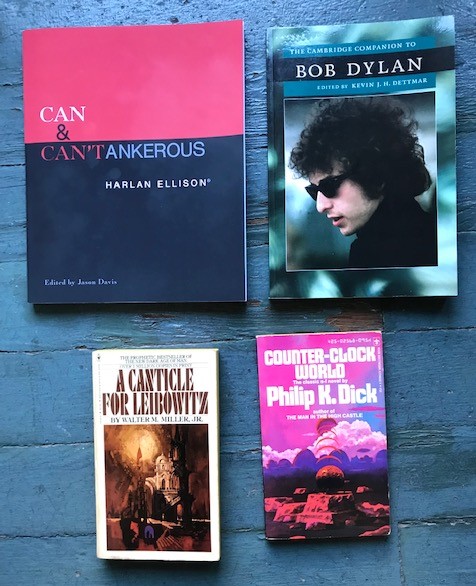