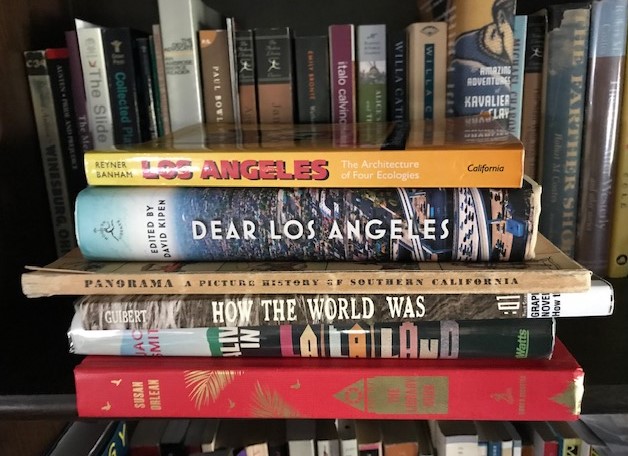 I know a bit about California history, perhaps more than the man on the street, yet I’m not scholar of the subject. I haven’t read Kevin Starr or Carey McWilliams or any number of other writers (see, I can’t even think of them) (although at least I know the names Starr and McWilliams).

But in October, I caught up a bit. I’d been reading Kipen’s book a bit every day since March (!) and Smith’s off and on since May or so. When I realized I might finish them the same month, I decided to make an LA month out of it.

“Alive in La La Land” (1989): Smith’s ninth and penultimate collection of columns was the last published in his lifetime. The most startling, and affecting, are the pieces about his collapse at home, triple bypass surgery and recovery. The remainder is the usual gentle, lightly humorous stuff. But as a man of 70, give or take, with heart trouble, he wasn’t getting out much, making this his least interesting book. You’d barely know he was living through the 1980s based on his reference points to classic movies and World War II-era pop. But he does cite Cyndi Lauper.

“Dear Los Angeles” (2018): Letters, diary entries and more from or about L.A., many by famous people, some by the obscure, arranged by date. Feb. 20, for example, has contributions dated 1861, 1928, 1934 and 1960. Some people find the organization confusing and would prefer strict chronology, but I don’t even understand what that book would look like, and anyway, that’s like taking the fizz out of soda. A fun, enlightening kaleidoscope of a book. I read this day by day starting in March, while going back to January to catch up and later skipping ahead to November and December so I wouldn’t spend the entire year on it.

“The Library Book” (2018): A paean to the LA Central Library, which survived a disastrous fire in 1986 whose cause was never definitively proven, and to libraries in general in a changing world. There are intriguing branches into the future of libraries, LA Central’s history and unexpected collections (maps, sheet music), and the story of the hapless dreamer and habitual liar who may or may not have set the fire. That a tremendous amount of research was done is evident, but each detail appears carefully chosen.

“Panorama” (1953): Charming overview history of Southern California, with all the omissions and boosterism you’d expect of a book published in 1953 by the white staff of a title insurance behemoth, but laden with 19th and early 20th century photos, drawings and lithographs. Many are surprising, as in, “there’s a photo of that from 1857??”

“Four Ecologies” (1971): “This sense of possibilities still ahead is part of the basic life-style of Los Angeles,” concludes Banham, perhaps the first outsider to have positive, and original, things to say about L.A. Were the Brit here in 2019 he might find less to like about the freeways he extolled and more to like about the downtown he dismissed. But he understood L.A., predicted the future desirability of Venice and was open-minded enough to see Ray Bradbury’s “Martian Chronicles” as a perfect SoCal allegory.

“How the World Was” (2014): I may never have listed a graphic novel here, even though I read ’em, because I put them in a separate mental category. But I’m making an exception for this, since it fits our theme. A French illustrator renders an oral history by his friend Alan Cope, who was born in the 1920s and grew up mostly in Alhambra. Cope relates descriptions and incidents from his childhood and about his family. It’s closely observed, low-key and ordinary, but in the best way possible, and set in a California that is almost unrecognizable.

I’d say “How the World Was” and “The Library Book” are the real winners this month. “Dear Los Angeles” and “Architecture of Four Ecologies” are certainly worth reading, if a bit more for the devotee. “Panorama” is vintage fun. “La La Land” has its merits, but you’d be better off with literally any of Smith’s other books.

Where did I get these books? Orlean and Kipen’s came to me as birthday gifts this year. “World” was bought at Powell’s in Portland in August. “Panorama” was a gift in 2017 from reader Roger Recupero from his own collection. “Ecologies” was bought at L.A.’s Last Bookstore in 2012. And Smith’s book was bought somewhere now forgotten in the mid-’00s.

What did you read in October? And have you read much L.A./SoCal history, and if so, what books would you recommend? 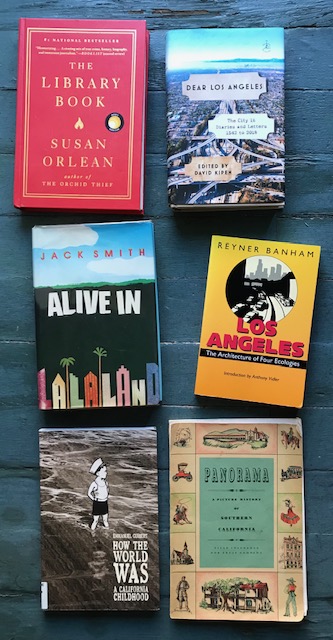