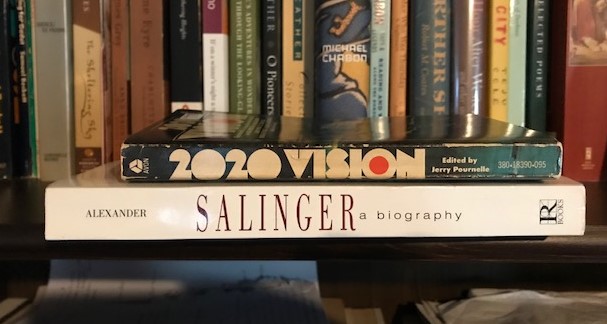 Happy New Year, readers! Before it feels too late to do so, let’s look back at December, in which we all had to squeeze reading in among holiday get-togethers and such. Leave us alone, people! We have seven chapters left!

Generally my Decembers are fairly leisurely as far as reading goes; perhaps yours are too. True to form, my year ended with two books read in December. The first was a fairly blah biography of J.D. Salinger, which I’d started a few weeks earlier, set aside and then ploughed through the last part of November, finishing a couple of days into December.

Having some slack time, I read a couple of stories from a 650-page science fiction anthology, at which I’ll probably continue to nibble away in the coming months (I’m up to p. 200), before putting that down to read the entirety of a 192-page science fiction anthology that was timely. That I finished Dec. 27. Since then I’ve read 100 pages of a 350-page anthology of a single science-fiction author and set that aside, hopefully to finish in February, to instead start a literary classic that I expect will be one of two or three books I’ll finish in January.

So, it’s been a fun few weeks, with my reading a bit less pressured than some months. Books of short stories can have that effect. You build up a certain momentum within them, yet the books don’t cry out to be finished immediately as with a novel.

Anyway, on to this month’s books.

“Salinger: A Biography”: Alexander gathered up the basic facts, interviewed a bunch of people and drew from Ian Hamilton’s unpublished but archived research. But the writing is clunky and some of his conclusions are bizarre: Salinger, whose writing is often a laugh riot, doesn’t have a keen sense of humor? Teddy kills his sister instead of the reverse? Salinger courted stalkers to fuel book sales? His preference for young adult women goes back to…when he was a young adult man? Do tell. Also, the cover is hideous. (It’s since been supplanted by one that’s a bit more professional.)

“2020 Vision”: The limits of SF’s ability to forecast the future are certainly clear in this 1974 book of stories set in 2020. Almost nothing has come to pass. But who cares? This is still a fun collection of SF originals. I actively enjoyed about half, with A.E. van Vogt and Norman Spinrad’s stories my favorites, and Dian Girard’s, about a future in which women’s ideal weight is enforced, was a welcome blast of feminism. I devoted my New Year’s Day column to this book. I read the book for my column more than for this blog, but it served a dual purpose.

I bought “Salinger” in 2002 at the Barnes and Noble in Old Town Pasadena (RIP) from a sale table and “2020” in 2007 at Book Baron in Anaheim (RIP) during a half-off closing sale. Two bargains! Although the books seem a little less like bargains after having sat around unread for more than a decade.

How was your December, readers? Feel free to just stick to December in your comments, as my annual year-end books post and column will follow in the next week, and we can reflect on our reading years there.

Next month: a Thoreau look at January.