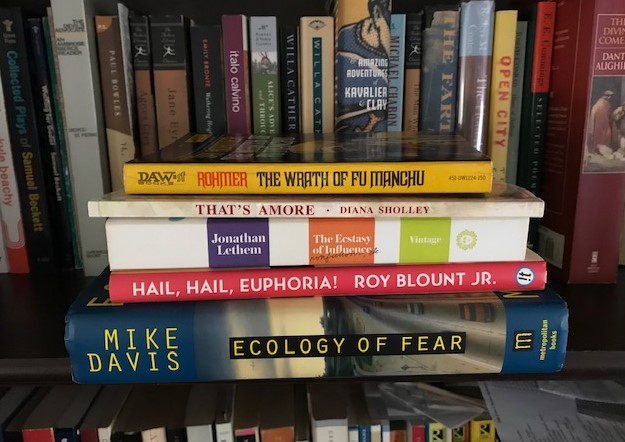 Was April better than March? It was for me; it seemed to fly by compared to endless March. Your mileage may vary, that is if you’re still driving anywhere. Personally I bought one tank of gas the entire month.

I don’t know why April seemed to move faster. In these parts, it rained eight out of nine straight days (Day 8, the non-rainy day, was overcast). After all that sameness, though, the sun came out and within days the temperature rose from a high of 55 to a high of 95. Maybe our spirits rose with it.

Kind of a rollercoaster month, weather-wise, not even including our ups and downs emotionally during our first full month of coronavirus restrictions. It’s coincidental to the lockdown, but my reading month encompassed titles with a range of emotions: fear, wrath, love, glee and pleasure. Let’s run through them.

“Fear,” 1998: Davis’ chapter on the perennial fires in Malibu, and the overkill efforts to protect an enclave that probably shouldn’t exist, has only gained strength since this book’s publication. Most of the rest of this disaster-themed analysis (encroaching wildlife, riots, lack of green space, and apocalyptic fiction and movies) is pretty good, if gleefully negative. It’s still hard to trust his Tornado Alley chapter, though.

“Wrath,” 1975: Collecting four Fu Manchu stories and eight other stories, most with a supernatural angle, some set in Rohmer’s beloved Egypt, this is far from prime Rohmer. Still, as a fan, I liked it anyway. Only “The Mystery of the Fabulous Lamp” was a dud, and it was a mere nine pages.

“Amore,” 2008: Many of these ’00s columns from the Daily Bulletin focus on Sholley’s nonagenarian immigrant grandmother and how the family’s life revolved around her. Others are more about Sholley’s life as a mother and wife. At the time I admit I took these columns for granted, or found the grasping, overbearing, broken-English grandmother grating. Now I found the columns amusing, modest and charming. But I’m glad it’s Sholley’s family and not mine.

“Euphoria,” 2010: Disappointing. Blount’s ramble through “Duck Soup” was remarkably padded, unstructured and, dare I say it, even dull. That said, he appreciates the Marxes’ greatest movie and delights in watching it in a theater full of kids who think it’s a riot. Also, referring to the suicidal Woody Allen movie character who sees “Duck Soup” and finds reason to live, Blount asks the devastating question: “Can we imagine the reverse case, of any Marx brother finding a reason to live in ‘Hannah and Her Sisters’?”

“Ecstasy,” 2011: This “autobiographical collage” assembles essays, introductions and reportage on books, movies, comics, music and other subjects close to Lethem’s heart. Together they offer a portrait of his inner life and influences. (Disclosure: He’s a friend.) Subjects of some of my favorites were Bob Dylan, Otis Redding, Philip K. Dick, Marvel Comics and Lethem’s bookstore-clerk days, with his 30-page profile of James Brown a standout. On the other hand, some of the literary pieces almost made me give up on the whole enterprise. Some reviewers on Goodreads found the James Brown piece boring. The beauty here is that my slog might be your cup of tea, and vice versa.

I didn’t really love any of these books, although I loved big chunks of “Ecstasy of Influence” and found the usual guilty pleasure in Rohmer. I have just one unread Fu Manchu book left, by the way.

“Ecology” was bought upon publication at Skylight Books in L.A. at a talk and signing by Davis, where we met; days later, I interviewed him at his home about his background in Fontana and he inscribed my book. At the time I hadn’t even read “City of Quartz,” read subsequently, and I never was sure that I wanted to read “Ecology,” but I’m pleased, if a little sheepish, to have belatedly done so.

“Wrath” was bought somewhere, perhaps eBay, in the mid-’00s; “Ecstasy” came from Vromans in Pasadena in 2012; “Euphoria” was bought at Magic Door Books in Pomona in 2017, where it had been traded in (unread) by Doug Evans (you didn’t miss much, Doug); and “Amore” was given to me in 2018 by a departing work colleague; I remain abashed that I didn’t buy one directly from Sholley a decade earlier.

So, April got a range of books out of the way from various strata of my shelves. How was your April? I remain curious if the pandemic is having an effect on your reading time or habits. (In this morning’s Times, Mary McNamara says she’s reread all her mysteries, “much of Dickens” including “Bleak House,” and more besides, maybe 100 books from the looks of it. Good lord.) I’m reading a little more than before. I’ve begun an ambitious history book that I’ve put off reading for two decades and may finish in, who knows, June or July, and a long audiobook, same. As I’m listening to the latter in my car, I may need to drive more.

Next month: May is a mixtape. 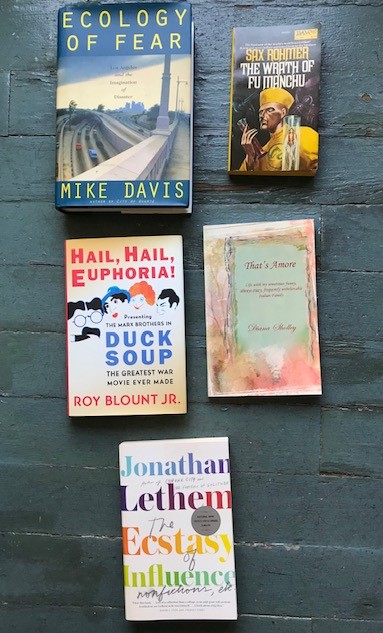