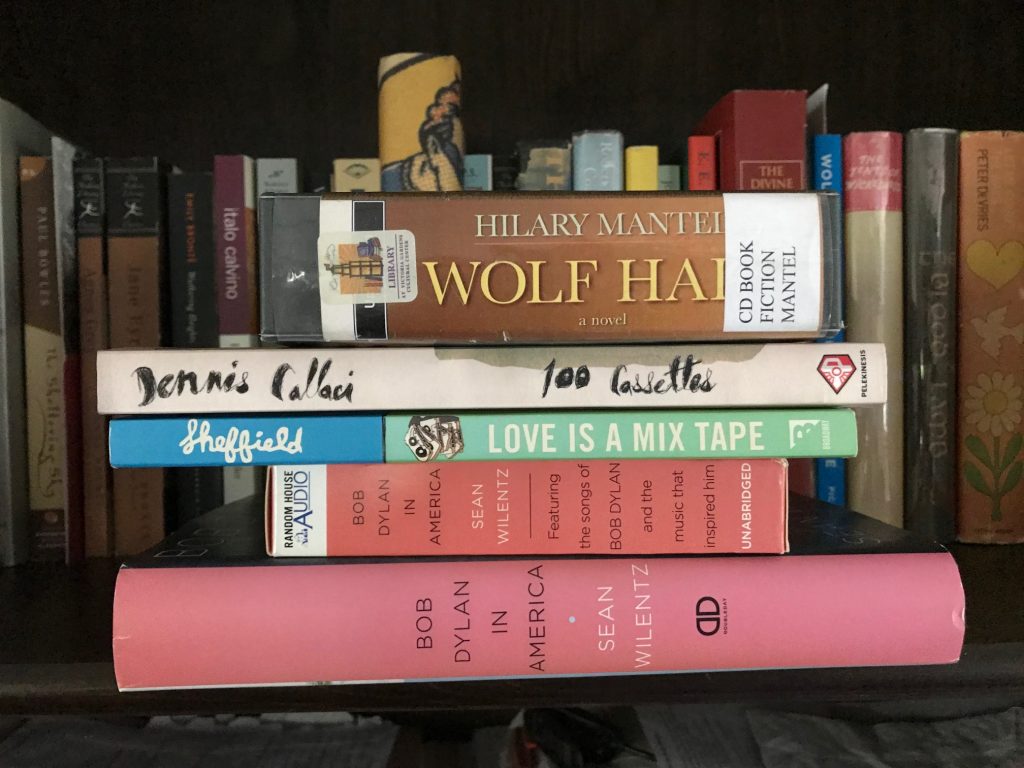 We’ve made it through nearly three months of lockdown — who knew we had it in us? — and now things are starting to open up again. Me, I’ve been opening books. How about you?

(As to the quickening pace at which things are opening up, I have mixed feelings.)

My May reading was a bit different than I’d expected going in. I finished “Bob Dylan in America” right off the bat (more on that in a moment), then cracked a 2008 purchase that struck me as a hilarious pairing, a Bradley Denton sci-fi novel titled “Buddy Holly is Alive on Ganymede.” The laughter soon died in my throat as within 15 pages or so I realized that this novel, bought because I like Buddy Holly, was kind of stupid and was barely going to be about him. (For unexplained reasons he had been transported from Iowa on Feb. 3, 1959 to a bubble on Ganymede and one Earthman in 1989 found the live transmission on his TV.) To be fair, the novel did win a John W. Campbell Award, but it wasn’t my kind of book and would have been a waste of probably 10 days or so.)

So I pivoted and went right to two books that had cassettes or tapes in their title, and then on May 31 wrapped up an audiobook (!) I’d been listening to in my car since late April. I’m glad to have finished it in May as I couldn’t very well keep it checked out an extra month so I could photograph it with my June books, and couldn’t pre-emptively photograph it with my June books as I’m not sure what they’ll be.

Anyway, let’s get to the books, shall we?

Sean Wilentz, “Bob Dylan in America” (2010): Idiosyncratic, just like Dylan, this study sticks to the Dylan time periods Wilentz finds of special interest: “Blonde on Blonde,” the Rolling Thunder Revue, “Infidels” and 1989-on. The chapter on Aaron Copland is a stretch, the one on 19th century hymnals dull, but Wilentz’ deep dives into such byways as Blind Willie McTell (the singer and the Dylan song), the true stories behind the traditional songs “Delia” and “Frankie and Albert,” and the film “Masked and Anonymous” are illuminating.

Rob Sheffield, “Love is a Mix Tape”  (2007): An ode to the forgotten pleasure of making and receiving cassettes of carefully chosen songs, or for that matter simply taping “American Top 40,” and to the fellow music fan who married the author and was taken in the blink of an eye, without even the chance for a long fade-out. Sheffield sets down details good and bad, as if to memorialize his late wife before time erases too much. Also, he’s often funny and opinionated: “…U2 sound like Jesuits trying to act cool for the youth-group retreat.”

Dennis Callaci, “100 Cassettes” (2020): Nominally a collection of 100 essays on albums that don’t exist by artists Callaci likes, this encompasses capsule artist biographies, meditations on culture and the memoir of a middle-aged collector. Since some of the prose is abstract and flows like poetry, add fiction to the list. Some pieces glanced off me, many hit home as a fellow music obsessive. Not for the general reader, but as I’m not a general reader, I liked it. (Disclosure: The writer is a personal friend.)

Hilary Mantel, “Wolf Hall” (2009): A delightful and absorbing novel, with Mantel’s years of historical research worn lightly as she convincingly follows court intrigues among a large cast, describes life in early 16th century England and creates a vivid inner life for wily bureaucrat Thomas Cromwell. He became a trusted counselor to Henry VIII, who in this volume is trying to ditch Wife No. 1 (Catherine of Aragorn) for Wife No. 2 (Anne Boleyn). For the audiobook, Simon Slater’s voice work made the characters come further to life. Thomas More and Cardinal Wolsey in particular were a marvel to hear. I wouldn’t have thought I would care for a historical novel, but this was a goodie.

Now, back to “Bob.” I bought the book at Borders in Rancho Cucamonga when it closed in 2011, along with a ton of other books, many still unread. A few months later, visiting home, I saw my mom was ready to discard the audiobook version and took it myself, with permission. I started listening to it on my drive to and from Arizona in early March. This was only my second audiobook, after Calvin Trillin’s “About Alice” circa 2007, which I played on a drive to the Bay Area. I liked this one and continued playing it in my car until finishing it; along the way I dipped into the print version to read footnotes and endnotes and clarify any points that had slipped past me. I’m such a devotee. That’s why I used both versions in the photos with this post.

When I visited Rancho Cucamonga’s Biane Library in April for a column — the library is offering curbside pickup — the library director ended our interview with some magical words: “Browse all you want.” So I had the library to myself. Oh boy!

Interested in another audiobook, I paid special attention to that aisle and lighted on Martel’s book; the third in the trilogy had recently been released to great acclaim, and the first two, I’d learned from the reviews, had won Man Booker Prizes (attention Doug Evans). So I chose the first. Eighteen discs, but even sticking exclusively to playing them in my car during coronavirus, I drove enough around the area to finish them in five weeks.

I’m about to check out the second, shorter book, “Bring Up the Bodies,” also on CD at 12 discs. The third one is apparently 30 discs — oof.

As for my other books, “Mix Tape” was bought in 2013 at Booksmith in San Francisco on vacation and “Cassettes” was a gift of Dennis’ upon publication in January. The fact that it took me seven years to get to “Mix Tape,” a 225-page book, is fresh evidence of my wastrel ways in book buying.

Anyway, I liked all four books this month, with “Wolf Hall” being the standout. “Mix Tape” was very affecting and would especially be recommended to anyone who was paying attention to music in the 1980s and ’90s; each chapter begins with the track listing of a tape the couple made in that era.

How are you getting by during the crisis, reading-wise? Are you focused or are you all over the place? Let us know in the comments. We’re sympathetic sorts.

Next month: Oh, just a short history of the world, that’s all. 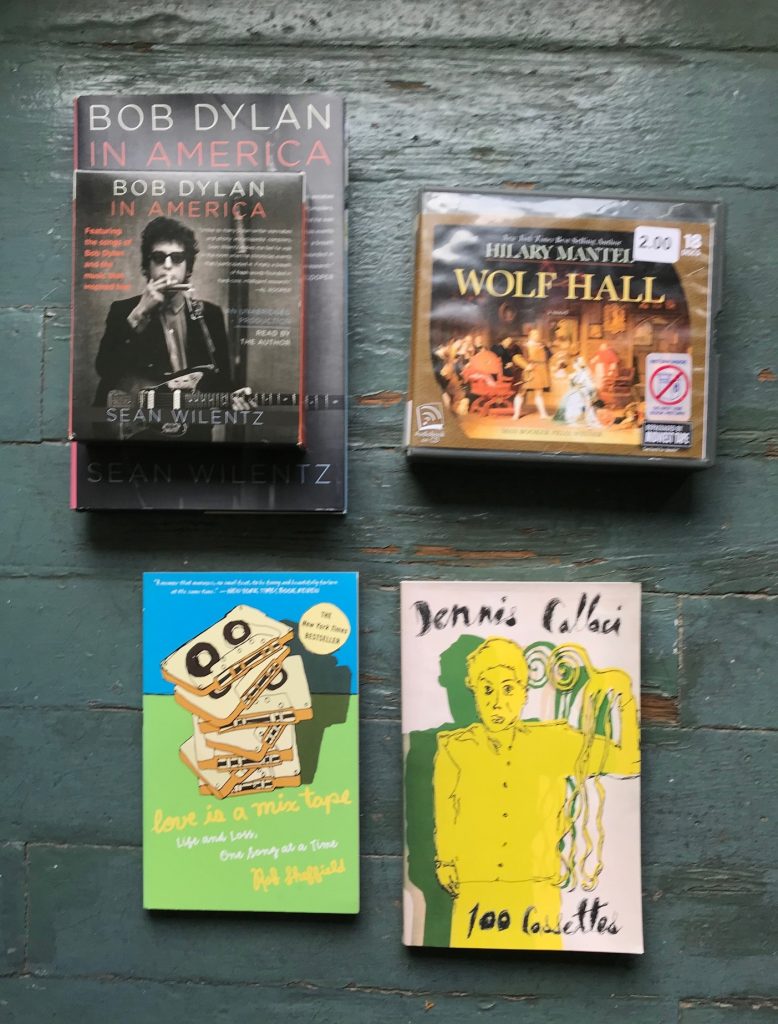