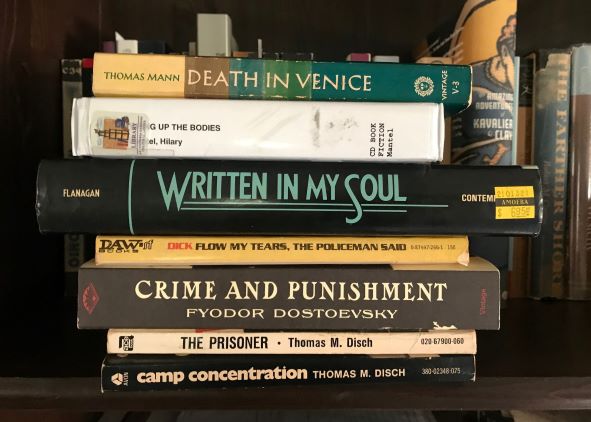 We’ve entered the dog days of August, so put your cat clothes on as we discuss whatever we read in July. In my case, I finished seven books, the titles of which form almost the outlines of a narrative of death, exhumation, spirits, police and the correctional arm. Crime and punishment, you might say. I kind of wish I hadn’t read Kafka’s “The Trial” a year ago or that would have slotted right in.

In point of fact, none of these books have very much to do with each other. They comprise, in order, a book of literary short stories, a novel of historical fiction, a collection of interviews with singer-songwriters, a science fiction novel, a classic Russian novel, a TV tie-in novel and another science fiction novel.

Now, let’s hustle to the scene of the crime:

“Death in Venice and Seven Other Stories” (1903): These eight stories (ranging from 28 to 75 pages) are all at least interesting, and very good in the case of the unsettling title novella. Mann’s carefully wrought prose reminds me of Henry James, a writer who’s easier to admire than warm to, and the almost dialogue-free prose requires concentration. While some stories are borderline pretentious, there’s also “A Man and his Dog,” about just that, and as detailed a character portrait of a canine as you’re likely to find outside of Jack London.

“Bring Up the Bodies” (2012): The Cromwell saga continues, and Thomas More, whose death ended the first book, casts a moral shadow over this one, as Cromwell begins to slide into villain territory. This saga won’t end well. But the middle book is as gripping as the first, and shorter besides. As an audiobook, Simon Vance’s reading is fine but to me doesn’t have the range of Simon Slater’s work on Book 1.

“Written in My Soul: Rock’s Great Songwriters Talk About Creating Their Music” (1986): Thoughtful Q&As with singer-songwriters out of the rock (not pop or soul) tradition. Overwhelmingly male and white, true, and some of the choices (Mark Knopfler, Rickie Lee Jones, Lowell George) haven’t stood the test of time. But Flanagan gets illuminating answers from people as disparate as Carl Perkins, Elvis Costello and Joni Mitchell, and Dylan gives one of his better interviews.

“Crime and Punishment” (1866): It’s vile, it’s nonsense, I spit on it! Just kidding; those are Russian idioms that pop up frequently. I was surprised how compelling, odd and moving this intimidatingly hefty novel is. The murders take place early on and we know who did it and why. Why is there another 400 pages? Just ask police detective Porfiry Petrovich, an antecedent of Lt. Columbo, who likes to pretend to be mixed up.

“Flow My Tears, the Policeman Said” (1974): In a near-future police state America, popular TV entertainer Jason Taverner is attacked, goes to the hospital and wakes up in a shabby hotel room, soon realizing his identity cards are missing and no one has ever heard of him. The eventual explanation for what happened isn’t entirely satisfying, and the attack was a MacGuffin. But this is one of PKD’s better novels, layered and compelling. The policeman’s tears are important too.

“The Prisoner” (1969): A paperback original based on the cult TV series, this was a lark for a writer of Disch’s ambition. (It’s said he needed the quick payment.) The result is a slightly arty TV novelization, or an almost mainstream Disch novel. Fifty years on, it remains the Disch book most likely to be found at a used bookstore. The story is enjoyable, starting at the beginning of Number Six’s imprisonment (or does it?) and wrapping up in a satisfying way that reveals the identity of Number One (possibly?). Elusive and playful.

“Camp Concentration” (1967): Written as journal entries, this is about a plush prison for unwitting patients in a military experiment that boosts their intelligence (hence the title pun) but ultimately kills them. Supposedly they’re there to come up with better ways to kill the enemy, but mostly they put on plays, quote poetry and practice alchemy. Is this a great novel? Er, maybe? Erudite, mannered, Disch just leaves me cold.

Best of the month was “Crime and Punishment,” with “Bring Up the Bodies” and “Written in My Soul” both close seconds in their own disparate ways. The others were enjoyable, with “Camp Concentration” the one I didn’t care much for.

That’s a small story in itself. Confronted by nine titles by Disch in the science fiction section of an excellent used bookstore in Goleta, Paperback Alley, in 2013, I bought eight of them on faith, knowing Disch’s reputation and knowing his books are hard to find. By this point I’ve read five of the eight and candidly didn’t much like any of them. Gong! I’m keeping an unread best-of story collection but am ditching the other two (and one bought elsewhere). He’s just not the writer for me.

Where’d this month’s books originate? Mann was bought circa 1982 in Illinois somewhere, “Tears” may date to the late 1980s (but I can’t remember), “Soul” from Amoeba Music in 2002, “Crime” from Vroman’s in 2006, “Prisoner” and “Camp” from Paperback Alley in 2013, and “Bodies” was checked out from the Rancho Cucamonga Public Library in June.

How was your July, readers? Let us know in the comments. To skip this month’s comments would be…a crime.

Next month: Shakespeare, plus baseball. 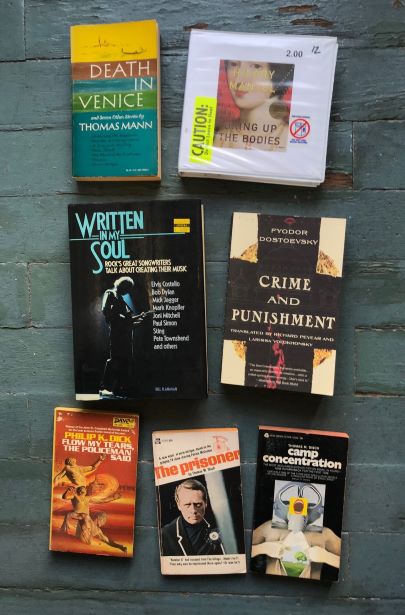