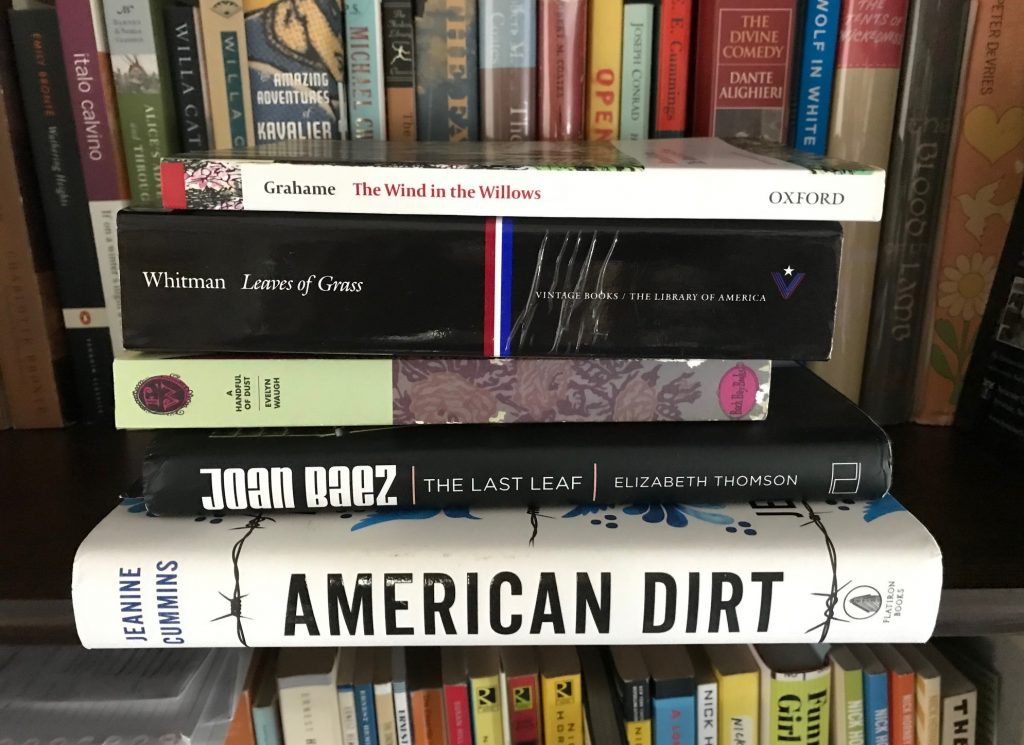 I promised my October reading would constitute “some earthy reading,” and as you can see by the titles above, that was no fib. Grass, dirt, dust, leaves, willows — everything but weeds and flowers.

I started “Leaves of Grass” back in May or June, reading four or so pages every night. The notion of reading “American Dirt” the same month I would finish “Grass” struck me, and “A Handful of Dust” as well. I had time for “Willows,” yet another long-lived unread book on my shelves. Just as the month was ending, the Joan Baez biography arrived in the mail from the publisher (a column is planned), and it was a delight to realize the title would fit the theme. I dove in and delayed the Reading Log a few days so I could finish the book, which I did on Nov. 5. And here we are.

My capsule thoughts on each:

“Leaves of Grass” (1892): Whitman’s poetry, clear, direct and democratic, exemplifies America as well as anything else you can name. His original, 1855 Leaves of Grass is concise; this sprawling deathbed edition, a compendium of every poem he wrote, is more than most of us need, although his Civil War and Lincoln poems, Crossing Brooklyn Ferry and a few more are essential. For 700-plus pages of poetry, though, this goes down easily, and I’m glad I read it.

“The Wind in the Willows” (1908): A gentle story of four English “chaps” who happen to be animals. The long, scholarly introduction and the copious asterisks in the text leading to endnotes tend to make the book more portentous than it really is. (You know you’re in deep water when even some of the chapter titles have asterisks.)

“American Dirt” (2020): A friend gave me this as a birthday gift, which was unfortunate given the controversy over cultural appropriation, exploitation and such. “I heard it’s good,” he said blandly. I could well have accepted the novel with tongs and personal protective gear, as if it were radium. I took off the dust jacket when I toted the book around last month in a bid to attract less attention, pro or con. But you know, I liked the book for what it was rather than for what the over-enthusiastic blurbs claimed, like the “Grapes of Wrath” comparison. It’s a little potboiler-y for that. But Cummins gives us a sense of the danger migrants go through, and there’s value in that.

“A Handful of Dust” (1934): A novel of bleakness and disillusionment, as well as scathing wit. I liked the movie adaptation and, three decades later, I liked the book too, about a marriage that falls apart for no good reason. The only other Waugh I’ve read is The Loved One, which was too absurd and sneering for my tastes. Dust, by contrast, reminds me of Paul Bowles’ austere The Sheltering Sky.

“Joan Baez: The Last Leaf” (2020): A noble attempt to give Joan Baez, nearing 80, her due, via a biography and discography; as Thomson notes, Baez’s career and life are far less documented than her compatriot Bob Dylan’s. Sexism no doubt plays a part, although the difference in talent and cultural influence is inescapable. I came away impressed by the extent of Baez’s activism, extending to Bernie Sanders and George Floyd. The text is sympathetic, but sometimes enthusiastic, and possibly protective; there’s almost nothing about Baez’s personal life of the past 50 years.

“Leaves of Grass” is the clear winner this month, with “Dust” and “Willows” next.

I mentioned how “Leaf” and “Dirt” arrived, both in 2020. “Leaves” was acquired, well, I can’t determine when; I read the short, 1855 version in 2013, and may already have owned this longer version, but at this point I can’t recall. I probably bought this longer one at Borders. “Dust” was bought used somewhere, possibly Glendale’s Brand Books, in the mid-’00s, and “Willows” was purchased in 2011 at a steep discount at Borders’ closing sale. I still have nearly a dozen unread books from that sale of nearly a decade ago, making the “savings” seem rather hollow. But buying them made me feel better, and I’ll get through them eventually.

How was your October, readers? Did the first month of fall treat you well, at least in your reading lives? Let us know in the comments.

Next month: the life cycle in book titles. 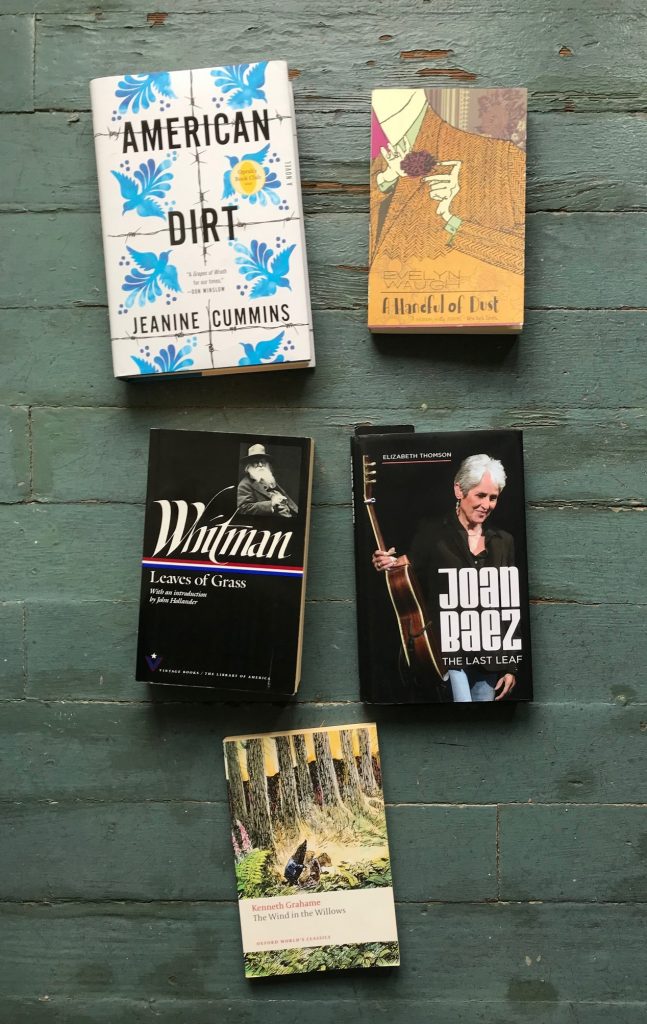