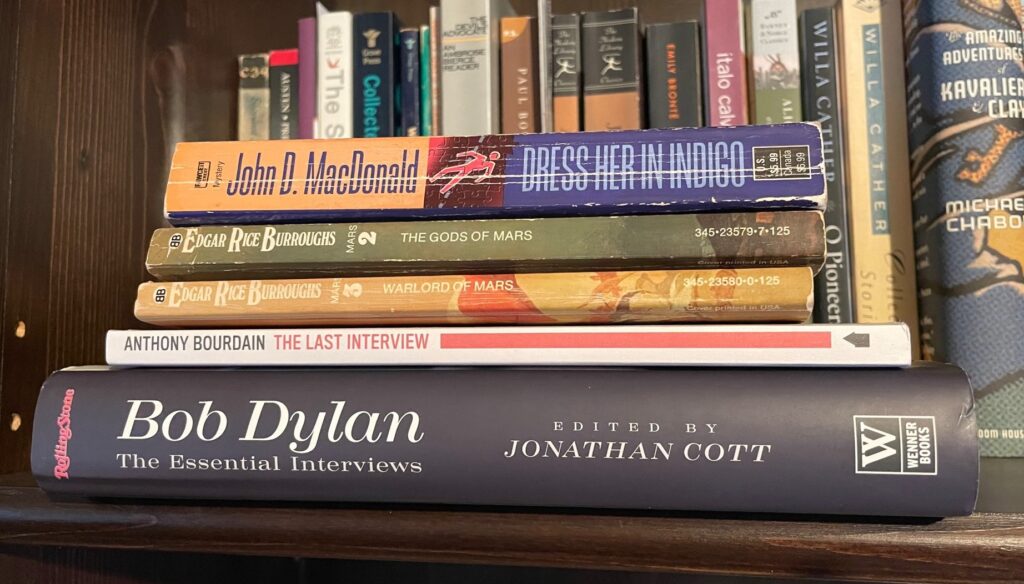 Five books in January, five books in February — I like how smoothly 2021 is shaping up, although I’ll like it better once I get a dose or two of vaccine.

I bought four books in February, three of them at 510 Books, open one weekend per month in a warehouse space in Pomona, and which I just learned about last month. The next sale is March 5-7 at 748 E. Bonita Ave., immediately west of Towne Avenue. I picked up one of the Ballantine Best of series of sci-fi books, which I collect, and the first two adaptations of the “Star Trek” animated series, which I watched/read/owned as a lad. (Grand total for three books: $3.) While I’m unlikely to read those two again, it’s fun to own them, plus they’re signed by the author to Dwain Kaiser, the late owner of Magic Door Books in Pomona — which has been bought by, bringing things full circle, 510 Books. It’ll reopen later this year, the owner told me.

The other book, “Secret Stairs,” a guide to L.A. walks, was bought Saturday at Stories Books in Echo Park after finishing…a secret stairs walk from the first edition. I’ve been relying on that 2010 book all along but decided to spring for the update. At least one of my four (!) remaining walks is very different due to changing conditions.

With that out of the way, let’s get to the books I read. I continued with the two authors I hope to focus on in 2021, with time for other stuff too.

“Dylan” (2006): This rounds up most of the better interviews Dylan’s given, with an emphasis on his Rolling Stone cover-story chats. While it’s nice as a fan to have so many of these between two covers, Dylan is such a wary subject that 400-plus pages is a bit much even for a devotee. Sometimes confounding, often evasive or gnomic, frequently funny or sly, now and then profound or poetic, rarely revealing factually. But usually interesting.

“Gods” (1913): John Carter returns to Mars (somehow), makes with the swordplay, laughs at danger and topples phony deities — all in a day’s work. He also learns he has a son, about 30 pages after we figure it out. An exciting entry in the series (some say it’s the best), better paced than the first novel, and ending on a cliffhanger, as Carter wins his way to Dejah Thoris only to lose her — temporarily, I trust.

“Warlord” (1913): “The Gods of Mars” ends on a cliffhanger, so I found myself charging into this third entry in the series, much like John Carter with his battle-lust and slashing sword, to see how the trilogy wraps up. This and “Gods” are essentially one novel split into two parts. Carter is continually out of the frying pan and into the fire, scampering over much of Barsoom in his desperate quest to rescue his wife, bodies stacking up in his wake. Tremendously exciting and fun. This ends the trilogy, but Burroughs didn’t let that stop him from writing more.

“Bourdain” (2019): To use a food metaphor, these seven interviews, some of them transcripts of TV chats, are an aperitif, or maybe only a condiment. Yet they do give us an idea — a taste? — of what engaged him, how he viewed the world, the value of travel as fatal to prejudice (per Twain) and the principle of being a good guest when abroad, one who was there to learn from his hosts, not correct them even on matters of fact.

“Indigo” (1969): McGee and Meyer leave Florida for Oaxaca, Mexico, to track the last days of a young American woman among the dregs of hippie expatriates. It’s the second novel in the series to take place in Mexico, and MacDonald employs the setting sympathetically. McGee uses his wits, but also his fists, and Meyer his knack for getting people to open up. MacDonald’s skill is vivid writing, and it’s on display on every page.

The two ERB books were my favorites this month, with McGee right behind them. I can’t exactly recommend them like I’d recommend a standalone novel or penetrating work of social science, of course.

Where and when did I pick them up? “Dylan” was bought at Borders in 2009, “Indigo” in 2010 at Book Rack in La Verne and the two Mars books in 2011 at the annual Black Ace paperback show, with “Bourdain” a Christmas gift in 2019. And yes, it’s dismaying that, for example, I spent three bucks on a mystery at a used paperback shop and didn’t read it for, gulp, 12 years. But it’s read now.

More generally, I’m feeling on track with this McGee/ERB thing, having read one per month of the former and three in two months of the latter. Resuming these series/authors after a long layoff, I wasn’t sure I could even read them two straight months, as that’s not usually how I read, but I’m liking ’em fine and will return for more in March. But first, this very week I should be wrapping up a nonfiction book and a classic mystery novel. Can I finish five books again in March? It’s possible.

How about you, readers? What’d you read in February — and if you’d care to say, have you got a vaccine yet, or at least impending hopes to get one?

Next month: the jungle, the desert, a lake and McGee. 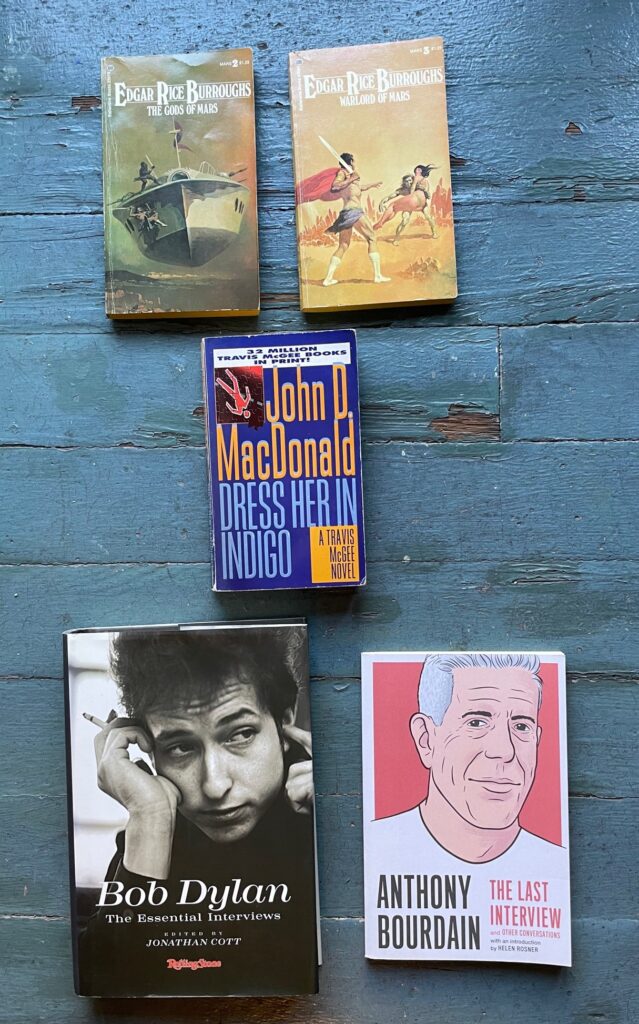