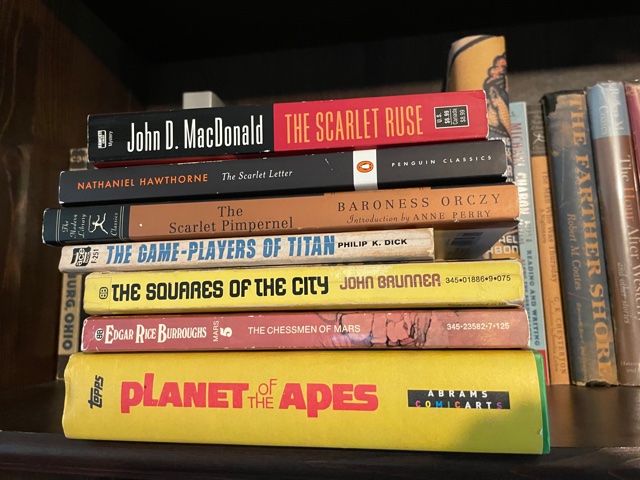 Starting the summer off with a bang, I read seven books in June, and they slot into not one but two themes: games and the color scarlet. It’s two, two, two themes in one. Now how much would you pay to read this blog? Don’t worry, it’s still free.

Here are my capsule summaries:

“Apes/Topps Cards” (2017): On the one paw this book couldn’t have been improved, since it’s got every card from the 1968 movie, the 1974 TV series and the (ehh) 2001 reboot, and the commentary is understated and helpful. But on the other paw, it’s a collection of trading cards, so how essential is it, even if you love POTA? Splitting the difference, I give this book 3 bananas.

“Game-Players” (1963): As is often the case with PKD, the story is all over the place; for a while it’s a murder mystery in which the suspects have had their memories wiped, so they honestly don’t know if they did it, before that’s abandoned. The eventual hook: With the stakes the ownership of Earth, how could you play a game of Bluff against a team of alien mind-readers? The solution isn’t bad. Confusing, but never less than entertaining. Mid-tier PKD.

“Chessmen” (1922): More propulsive than Book 4 of the John Carter series and with a vivid character in Ghek, plus a romance, newfound friends and other ERB staples, all welcome. John Carter and Dejah Thoris only make cameos, but it’s a compliment to ERB that they’re not missed.

“Squares” (1965): Set in an ultramodern, exquisitely planned South American city and inspired by Brasilia, this nominally science fiction novel ought to be of interest to fans of urban planning and chess. (Basically, the narrator, a traffic consultant, discovers he’s a pawn — literally.) It can be hard keeping the two political factions straight and the chess conceit doesn’t quite work. The story still kept me engaged.

“Scarlet Pimpernel” (1905): A clear antecedent to Batman (rich fop acts useless to divert attention from his secret identity), Doc Savage and the Shadow (both with their team of loyal operatives). High entertainment with a large helping of romance, like a Jane Austen novel crossed with a pulp adventure.

“Scarlet Ruse” (1971): I like the McGee series, and there’s nothing really wrong with this one. No. 14 starts on an unusual note, with McGee’s houseboat seemingly bound for eviction from the marina, and with an unusually eggheaded plot involving high-grade stamp collecting. OK, that’s different. The violence at the end reverts to formula and leaves McGee a wreck. Maybe it’s appropriate that a mystery about stamps ends with McGee taking a licking? This didn’t push the envelope as much as I’d have wished and, like an old stamp, left a sour taste.

The clear winner in June was Hawthorne. Pimpernel is worthwhile. Everything else is for aficionados only.

How was your June in reading? We’re at the halfway point for 2021. Surprising myself, I find I’ve logged 33 books. I’m not likely to hit 66 and don’t really want to hit 66; I should ease off the pedal and accomplish something else with a portion of my spare time. But it’s certainly satisfying to have knocked down so many old books. Let us know how your year is progressing in the comments, please.

Next month: A lot of alliteration. 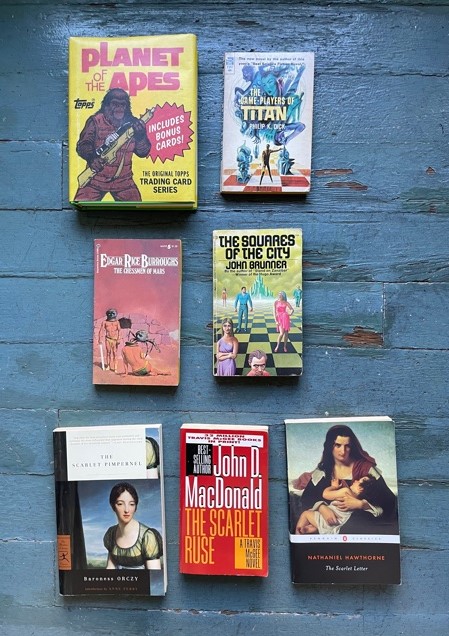