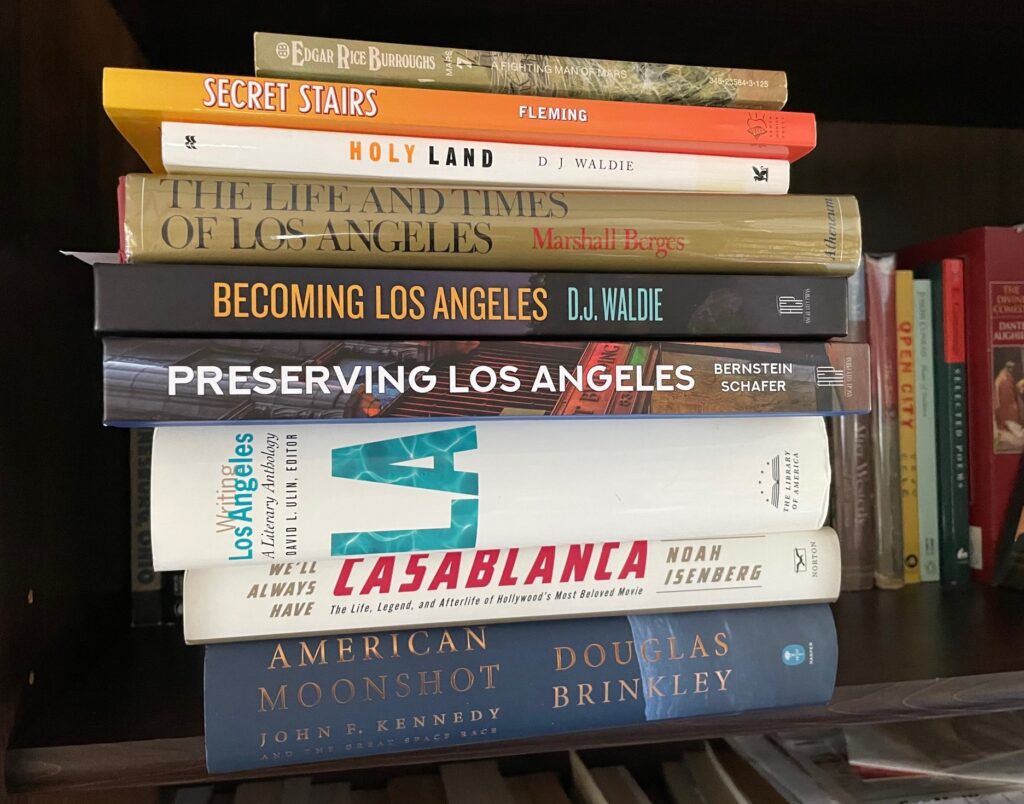 In the eighth month of 2021, I cut loose with nine books, surprising myself. It helped that I listened to three of them on audiobook (despite owning copies). That sure speeded things up. They make for a tall stack, especially with a couple of fat hardcovers in the mix.

Eight of the nine are nonfiction, another surprise, since I was concentrating on fiction this year. Well, 7 1/2 — “Writing LA” is a mix of fiction and non. Let’s go to my capsule summaries.

“Casablanca” (2017): Isenberg surveys the film from multiple angles: its genesis, its production, its impact and its afterlife. Even as a fan of the film, I learned a few things, such as how many of the plot points and lines of dialogue were lifted from the unproduced play it was based on, and how many actors and bit players were refugees themselves. That said, this book isn’t the place to go for, say, a feminist critique; that some don’t like “Casablanca” is barely acknowledged.

“Writing” (2002): This is a nearly 900-page anthology of essays, stories and excerpts going back to Helen Hunt Jackson’s 1883 interview with an aging Californio and ending with David Thomson’s 1997 ode to Mulholland Drive. Included by editor David Ulin are the big names you’d expect (Chandler, Fitzgerald, Didion) and many you wouldn’t. The result presents the region from multiple angles, and serves as a nose-thumb to anyone who thinks we’re too lightweight for literature. If you’re interested in LA, this is the most useful doorstop you’ll ever own.

“Stairs” (2010): 42 urban walks involving public stairways, mostly in Silver Lake, Echo Park, Los Feliz and Hollywood. How do you rate a walking guide? Since I’ve completed every walk, over the course of 10 meandering years, all by carrying the book, this has to be the single most immersive reading experience I’ve ever had. So by my lights, it’s the “Moby-Dick” of urban walking guides.

“Fighting Man of Mars” (1930): An enjoyable entry in the series, with a romance involving a hero who knows nothing of love or the fairer sex, but learns eventually after cluelessly, but charmingly, wondering why his heart is beating faster around the woman he considers his friend. Oh, Hadron of Hastor, you lovable lunkhead! And in a way this book is quite modern: It could just as easily have been titled A Fighting Woman of Mars thanks to the athleticism, bravery and swordplay of Tavia, a bold creation for 1929/30.

“Moonshot” (2019): As part of the Apollo 11-17 generation, I’ve always felt positively about the space program but never appreciated just how much commitment had been required to fulfill JFK’s crazy-expensive 1961 promise to put a man on the moon by the end of the decade. Or how JFK came to make the promise to begin with. Or how ex-Nazi rocketmen and Soviet space aspirations pushed us forward, or how much LBJ backed the space program (and got Mission Control built in his home state of Texas). Brinkley pulls all those threads together into a useful, readable account, published in time for the 50th anniversary of Apollo 11.

“Preserving” (2021): LA’s reputation is ahistorical and concerned more with the future than the past, but Preserving Los Angeles shows the other side, which is the wealth of buildings, neighborhoods and features that have withstood time and real estate cycles to remain nearly intact or find a new use. Bernstein even constructs a guide for exporting LA’s approach elsewhere. It doesn’t make for a lively or lyrical read, but it’s worthwhile if you love LA, and the photo documentation is valuable.

“Becoming” (2020): “Becoming might be the definition of Los Angeles,” Waldie writes. These reflective essays, or “footloose thoughts,” explore such topics as 19th century would-be boomtowns, Spanish Colonial Revival architecture, TV personalities Huell Howser and Tom Hatten, our months without sunshine (May and June), a woman who specializes in selling buttons and the examples of nature encountered on Waldie’s suburban walks. Unassuming, thoughtful.

“The Times” (1984): A breezy look at the LA Times past and present (as of 1984), this includes the paper’s notorious anti-labor position and a few other zingers but is largely a glossy, semi-official account. (Not for nothing is Berges’ previous book “Corporations and the Quality of Life.”) Still, it’s an easy, enjoyable read if the topic is of interest, and if you love newspapers it’s a little poignant, since in 1984 the Times was probably at its peak, with 1 million circulation, 500 pages on Sundays and 850 editorial employees. No one could have guessed the erosion to come.

“Holy Land” (1996): I read this personal and social history of Lakewood, the instant LA suburb, in 2013 and was bemused by its brevity and its 300-plus chapters in under 200 pages. It’s now on audiobook, I borrowed it from the library, and this time through I was delighted. The short chapters, some of which might begin and end while you’re waiting at a stoplight or even while making a left turn, have spareness, poetry and wit that struck me when read aloud. It was probably me, not him, but now I like it.

The standouts of August were “Moonshot,” “Writing” and “Holy Land.” Also, I wrote a column about “Writing,” “Becoming” and “Preserving,” a trio I dubbed “Gerund LA.” Ditto about “Secret Stairs.” Consider them Reading Log bonus features.

We’re now two-thirds of the way through 2021, readers. If your year in books is drifting, there’s still time to course-correct. I’m not sure how the rest of my year will go, but I’m likely to settle back more into the five-or-six-a-month range. It was satisfying to finally push through “Writing” after getting to around page 250 via stints here and there through the year; I picked it up again in late July and, as the month turned, decided to just plow ahead and finish. Felt good to get such a large collection in the “read” category.

Next month: The return of Travis McGee. 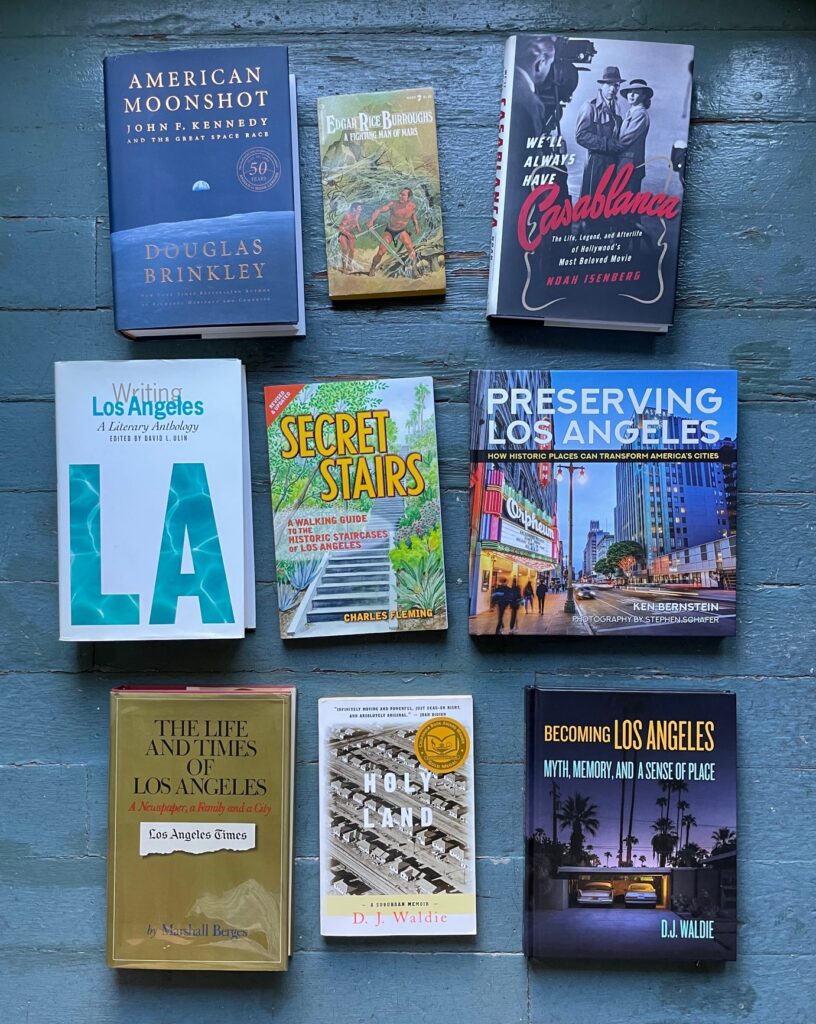