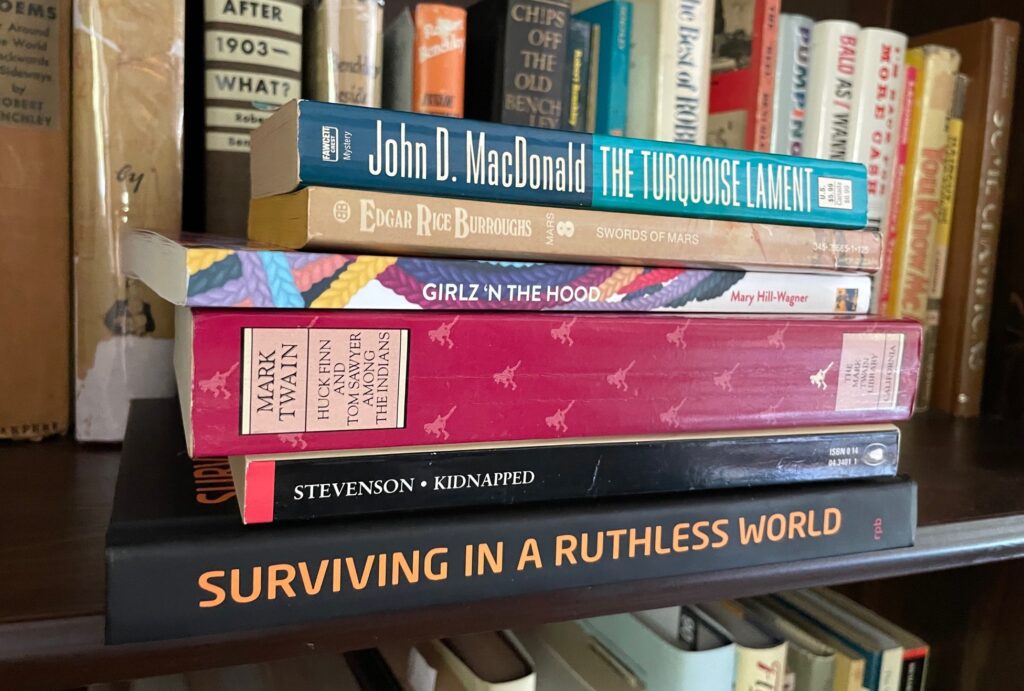 Here we are in fall. Where did the year go? Although as with 2020, in some respects 2021 can’t pass quickly enough — unless we have reading goals to meet.

I made it through six books in September, four of them fiction — one of them an undisputed classic that you may well have read.

“Turquoise” (1973): More even-keeled (pardon the boat joke) than #14, which was all over the place. Also, at one point (pp. 184-5) MacDonald via McGee prompts his audience to write the real-life board of directors of a Borden phosphate and fertilizer plant in Florida demanding they stop poisoning the air, and good for him. I wonder how many letters they got?

“Surviving” (2020): Well-intentioned amateur scholarship regarding the 1982 Dylan album “Infidels,” from the songwriting to the recording sessions, including songs scratched, sometimes bewilderingly, from the final album. For the committed, the chapters on the evolution of the long-unreleased songs “Blind Willie McTell” and “Foot of Pride” are of interest, but otherwise, this trawl through the BD Archives for material on the “Infidels” period is basically an assemblage of notes and facts. And it really needed an editor.

“Swords” (1935): John Carter finally gets to star again in his own series for the first time since Book 3, and the series is the better for it. In fact this might be the most enjoyable entry since Book 3. But I miss his four-armed green buddy Tars Tarkas.

“Kidnapped” (1886): The Jacobite vs. Whig dynamic is hard to parse without a grounding in Scotland history. But the friendship between David Balfour and Alan Breck is easier to understand, and the writing is often vivid and insightful. More complex than “Treasure Island,” but admittedly less fun. I own the book but borrowed an audio version; the narrator had a Scottish accent, adding an aurally authentic element.

“Girlz ‘n the Hood” (2021): Subtitled “A Memoir of Mama in South Central Los Angeles,” this tells the author’s story of growing up with a single mother among 10 siblings during the 1970s and ’80s in varying levels of poverty. Comic stories abound, and some shocking or head-shaking ones too. (Actually, there’s some overlap.) The author lives in Montclair and I read this one before interviewing her for a column. Not bad.

“Huck and Tom” (1989): Twain got 50 pages into a (shocking, anti-Indian) sequel to “Finn” meant to strip away myths about the Old West that he abandoned after realizing he’d painted himself into a corner. An attempt at a light “Finn” sequel, a mystery, was pages from the likely end before Twain dropped it too. A few slight Hannibal pieces round out this collection. Interesting, but, organized as it is around two unfinished novels, hardly satisfying.

I’d rate all these at 3 stars out of 5, except the Dylan book at 2 stars. There wasn’t a clear winner, in other words, although “Kidnapped” and “Swords” were my favorites.

Acquisition of these books ranged in time over 17 years: “Girlz” and “Surviving” came into my hands this year, the first from the author, the second a birthday gift from a friend; “Turquoise” was bought at Goleta’s Paperback Alley in 2019; “Swords” was bought at St. Louis’ Book House in 2011; and the other two were bought at Berkeley’s Moe’s Books in separate visits, “Kidnapped” in 2009 and “Huck” in 2004.

I’m pleased to have knocked them all off my unread list and to have both continued the Mars series and resumed the McGee series. And I read six books, a pace I hope to maintain for the next three months. That would put me at an even 70 books for the year. Goals!

How was your September, readers? Also, have any of you read “Kidnapped” — I have to think one or two of you have — and if so, what did you think, if you remember?

Next month: The return of Tarzan. 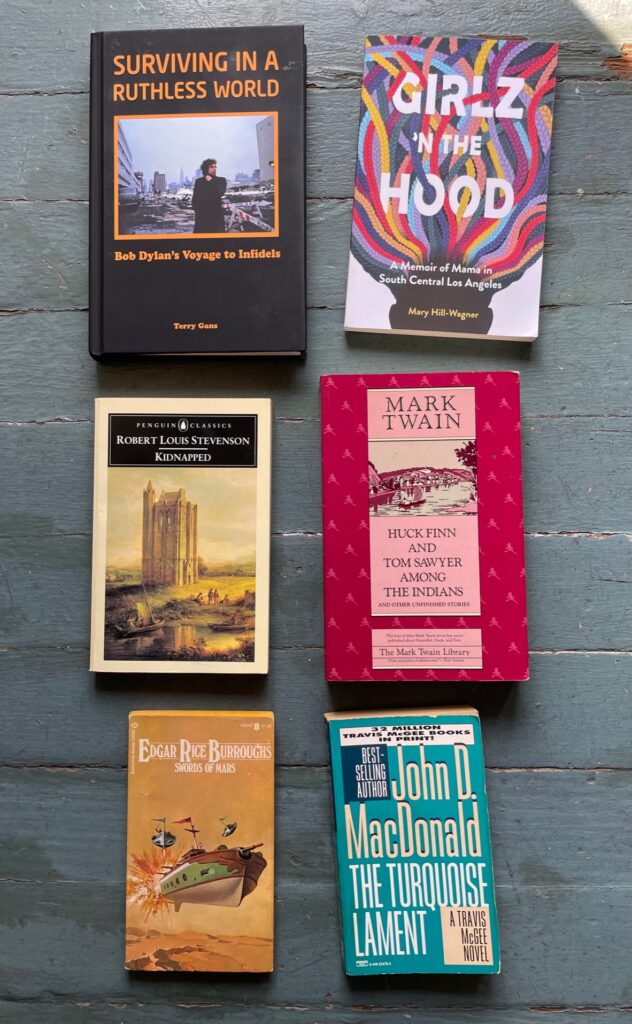