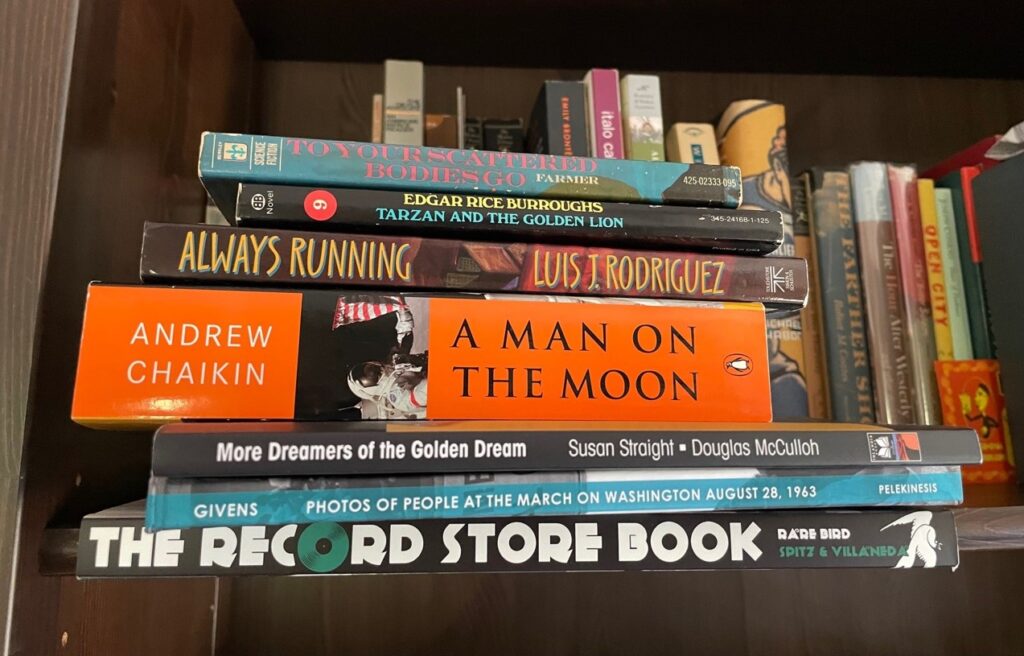 Happy November! I had a seven-book October, which isn’t bad, even if one of the books was so short it was read over lunch. Also, I ended up through one means or another acquiring more books than I read, and with only one overlap between the two categories. Well, that’s how it goes. Let’s dig in.

“Tarzan No. 9” (1923): ERB was a master of jumping among two or three sets of characters and locales, slowly drawing them together for suspense and maximum impact. A fun entry in the series that includes a Tarzan impostor who fools everyone and complicates everything. In “Brady Bunch” terms, he’s like Cousin Oliver, but evil!

“Record Store” (2015): For fans of record stores, this is a loving, analog tribute, with photos (shot on film) and text about 50 Greater LA shops of the early 2010s. Some are pre-CD stores that have hung on through multiple changes in format while others are part of the vinyl resurgence. The majority are still in business as of 2021. The observations of the shop owners get repetitive (breaking: vinyl sounds “warmer” than CDs!) but they’re all small business folks doing what they love, and that never goes out of style.

“Moon” (1994): On the one hand, this is a titanic work of research, involving not just interviews with every Apollo astronaut (except one who died early) but sifting through Mission Control tapes, transcripts of debriefings, etc. It’s admirable on many levels. And Chaikin does evoke the wonder of the moon missions. But just as the public lost interest in the later missions, mine faded toward the end of Chaikin’s book as the alleged wonder involved the finer points of (yawn) geology.

“Dreamers” (2021): Writer Susan Straight and photographer Douglas McCulloh teamed up for essays and B&W photos of people and places on the largely black and brown eastside of the city of Riverside, as well as collecting appropriate personal photos to further illuminate the history they’re documenting. The book accompanies an exhibit at the Riverside Art Museum, now on view. Of local interest.

“Running” (1993): This memoir about Rodriguez’s teenage years struggling in school, living in poverty and having run-ins with the law is illuminating about L.A. in the late ’60s-early ’70s. In his view, as he tried to persuade his own teenaged son not to follow his old path, the struggle hadn’t changed all that much by the early ’90s.

“Scattered Bodies” (1971): Everyone who ever lived, all 36 billion of us from prehumans to the 20th century, is resurrected in the prime of their life along a river that stretches thousands of miles. The 19th century adventurer/scholar Richard Francis Burton, the protagonist, wonders why and how. An expansive, promising concept, if not totally satisfying since it’s the start of the Riverworld series. I’ll keep reading.

“March on Washington” (2021): A son compiles his late father’s photos of the scene at the 1963 march and a grandson designs and publishes it. The backstory is kind of interesting: The eldest Givens was a white aerospace engineer who knew almost nothing about the civil rights movement, wandered through with his camera and then seemingly never spoke of it again, with the photos a surprise to his children. The photos give a sense of what the day must have been like, but this is a personal project and a very slight book. (It’s the one I finished over lunch. I debated whether to include it here before deciding, hey, it’s between two covers, it’s a book — c’mon.)

All these books were good, or at least good enough, but none really stand above the pack as one I would recommend to you all. Closest is “Scattered Bodies,” which won a Hugo as best SF novel, and it doesn’t hurt this series’ prospects that the follow-up’s lead character is Mark Twain, piloting a riverboat along the endless river. “A Man on the Moon” is the most ambitious and worth reading if you’re fascinated by the Apollo program.

“Photos” was a gift of the publisher (who is also my publisher), “More Dreamers” was a gift of its publisher and “Moon” was a friend’s gift in 2020; and “Always Running” was bought this fall used at North Hollywood’s Iliad Books. (The latter and “Dreamers” were also the subject of recent columns of mine.)

The other three were purchased some time ago: “Record Store” from Claremont’s Rhino Records in 2015 (yes, I bought it when it came out, then shelved it for six years — sigh), “Tarzan” in 2012 from the Black Ace Paperback Show and “Scattered” in 2007 from Anaheim’s late Book Baron.

How was your October, readers? If you have any reading goals, is this a race against time? (This is what passes for action and drama on the Reading Log.)

Next month: men and cartoons. 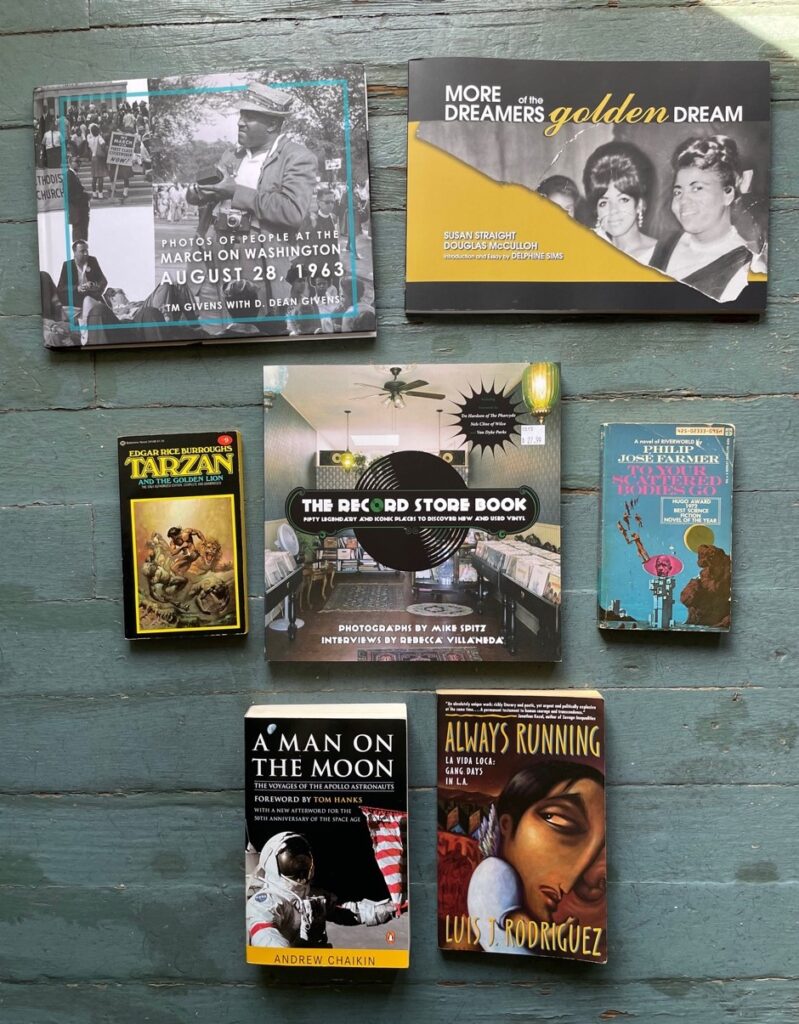