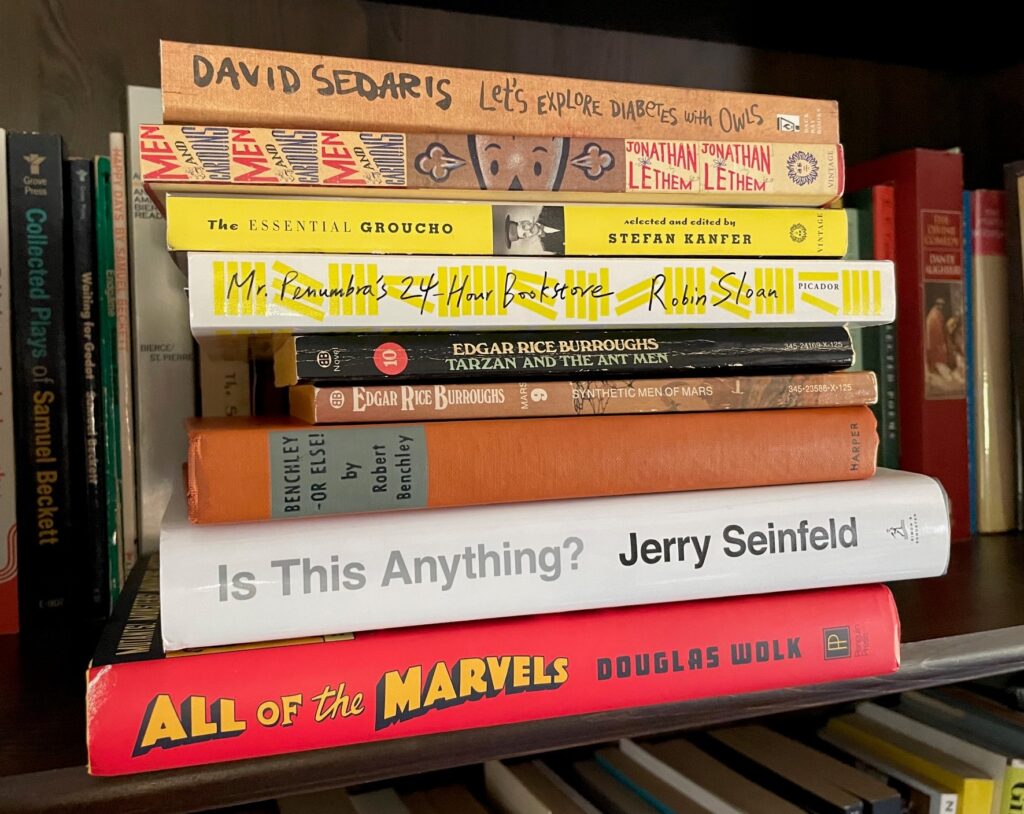 Here we are in December, looking back at November, as 2021 heads into the home stretch. If we have any books we desperately want to get to or to wrap up, better snap to it.

I did my part in November, as you can see: nine books. They encompass five books of nonfiction and four of fiction (unless it turns out “Tarzan and the Ant Men” is a true-life account). Let’s run ’em down.

“Marvels” (2021): Subtitled “A Journey to the Ends of the Biggest Story Ever Told,” Wolk’s book is the result of his reading 17,000 Marvel comics, which he doesn’t recommend, and thinking deeply about them, which he does. He covers the basics in a way friendly to new or lapsed comics readers. Yet his observations, insights and reader tips had this lifelong Marvel fan jotting notes, nodding in affirmation or grunting in surprise. His section on the Shang-Chi series of the 1970s-’80s as an unsung gem was especially welcome. That he likes modern and classic Marvel both is to his credit. As Stan Lee might have enthused: “Face it, True Believer, this one has it all.”

“Benchley” (1947): Published after his death, this is a mixed bag of good stuff and dregs, some of which read as if written on a deadline with little inspiration. Still, even lesser Benchley has its pleasures. One gem is about how he likes reading mystery novels but that he’s always lost at the end during the dense monologue by the detective of how the crime was pulled off.

“Anything?” (2020): This compilation of Seinfeld’s stand-up bits is arranged by decade going back to the 1980s, and hearing him read them — I listened to the audiobook while referring at times to the hardcover — gives a semblance of hearing them live. His delivery is less friendly than on his show, and some of the ’00s jokes come across as semi-hostile. Overall, it’s funny-to-hilarious, of course, and this book is better than his early “Seinlanguage.” The short autobiographical introductions per decade might make us wish for a full memoir — although I won’t hold my breath.

“Cartoons” (2005): The most straightforward story, “Vivian Relf,” was the most affecting. The others, from near-realism to comic absurdity, had their pleasures, but the overall impact on me was slight. As an example of how times change, when the first story, “The Vision,” was published, Lethem had to explain within the story who the obscure Marvel character was, and now, after “Avengers” movies and the “WandaVision” TV series, he’s recognized by millions.

“Synthetic Men” (1939): In his ERB bio, Richard Lupoff called this one “thoroughly bad,” which made me go in expecting the worst. Well, OK, it’s somewhat formulaic, and Ras Thavas (from Book 6) is back, as is his brain transferral surgeries. A fast-growing mass of vat-created protoplasm that threatens to overwhelm Barsoom, though, that’s new. If this one is no gem, it’s no embarrassment either.

“Ant Men” (1924): Tarzan runs into two warring cities of people 18 inches tall, arrogantly thinks he can take on an entire army single-handedly, gets captured, wakes up and finds himself 18 inches tall (although for the longest time he can’t figure it out and thinks everyone else has grown). A fun outing, somewhat different, but disappointing compared to Lupoff’s rave, in his ERB bio, that this was the best entry since the first. The Ape-Man series continues for 14 more novels, by the way, but I plan to stop here.

“Owls” (2013): There’s a more a generous spirit underlying most of the autobiographical pieces than before: more sympathy and reflectiveness, less mean-spiritedness and snark. It’s (dare I say it) a sign of growth. The one about the hygiene and food in China is, as they say, problematic, and the six fictional essays using other voices as narrator are hit or miss. On this one too I listened to the audiobook of a volume I own, and Sedaris reads it himself, a plus.

“Mr. Penumbra” (2012): A clever story involving modes of communication old and new: email, letters, cassettes, a Walkman, cell phones, the internet, lead type and, most crucially, books and e-readers. The plot involving a 500-year-old secret society in robes gets into a less self-serious version of Dan Brown territory, and the big reveal is slightly incomprehensible. But the likable narration helps a lot. I listened to the audio version of this as well.

“Groucho” (2004): A worthy attempt to collect and preserve some of Groucho’s writings and quiz-show quips. The section of freelance pieces is too long, since most were only middling, and weighed down what was otherwise a great pleasure of letters and script excerpts. Still, a neat idea, one that salvages a lot of out-of-print or uncollected material.

Overview: Not a dog in the bunch, although the Benchley was pretty iffy. “Marvels” is my favorite, trailed by “Owls,” and then everything else. By listening to audiobooks downloaded from a library, I managed to squeeze in three extra books this month, largely while driving. What great times we live in, eh?

These books fell into my life over a course of 17 years: Wolk came from his publisher and Seinfeld as a birthday gift from a friend, both in 2021; Sedaris was bought at his 2015 appearance at Scripps College and signed by the author; Sloan was bought on a road trip in 2013 from Half Moon Bay’s Bay Books; both ERBs came from the Black Ace Paperback Show, Tarzan in 2012 and Mars in 2011; Benchley was bought at Pasadena’s estimable Book Alley in 2011, while Lethem came the same year via North Hollywood’s Iliad Books; and Groucho was picked up at Berkeley’s Moe’s Books in, gulp, 2004.

As is usually the case here, the pitfalls of my past book-buying habits are revealed for all the world (or at least a half-dozen of you) to see. In no rational world should the ERB books have sat on my shelf unread for a decade; same with the Lethem book, which even at my pokey pace took only about five days to read. My excuse, of course, is that I’ve read hundreds of other books this past decade, many far older than these. I wish I hadn’t been so profligate in years past in padding out my shelves, as if a book shortage were on the horizon and I needed to stock up. Ah, me.

How was your November, readers? Let us all hear about it in the comments, please. Onward to our December reading!

Next month: 2021 ends, as does the John Carter series. 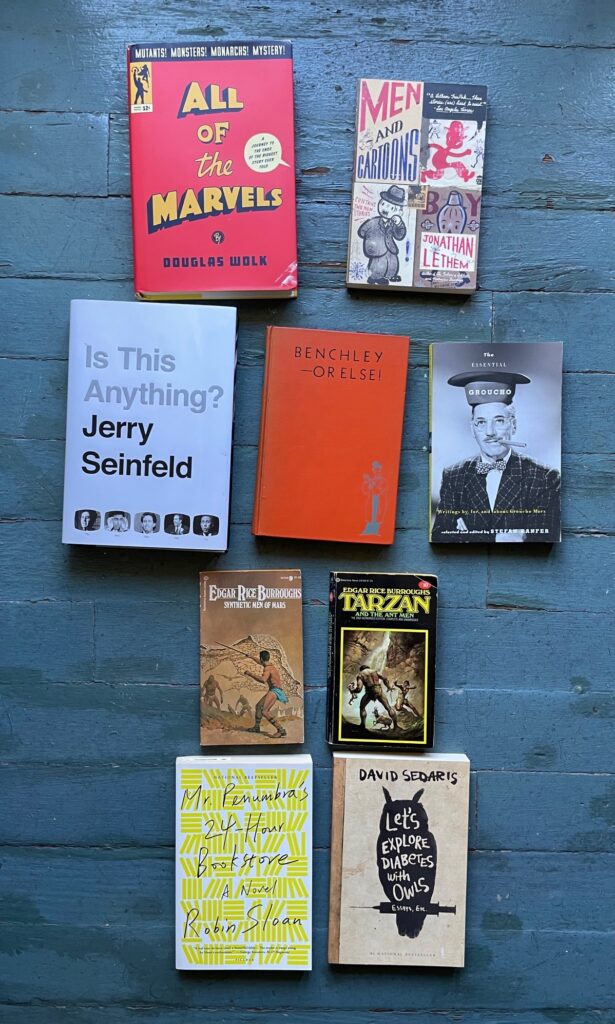