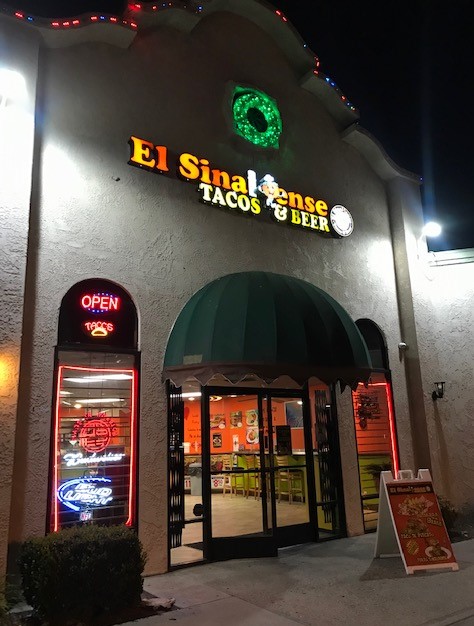 Note: This post, about a meal in February, was prepared in early March, prior to the coronavirus shutdown.

On my way to a Fontana council meeting one recent evening, I saw the glowing sign for El Sinaloense and on an impulse pulled into the parking lot. It’s in a small business center with an insurance office and more, with the restaurant in the elbow of the L-shaped complex.

There’s a large dining room painted a cheery orange with green accents. You have your choice of booths or tables, and they’ll wait on you. El Sinaloense means “The Sinaloan” and is such a popular song in the banda style that it’s practically the Mexican state’s anthem.

The menu has tacos, burritos, mulitas and tostadas, with an emphasis on seafood and birria, which is stewed goat or beef (the menu didn’t specify which). In fact they make an item called the quesabirria, a quesadilla with birria. 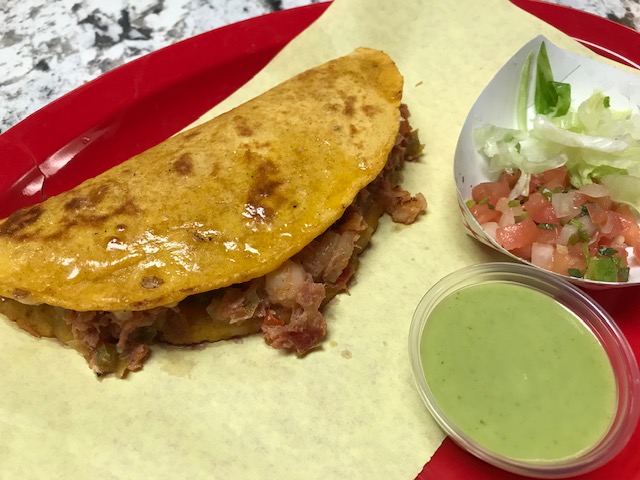 Birria fan though I am, I went for a single taco gobernador ($5.50), which is marlin and shrimp, after being assured the tacos are large. (A poster on the wall showed two on a plate, but an order is just one.) A few minutes later, the cook brought it to my table and presented it with a near-flourish. The taco was indeed large, in a handmade corn tortilla, with small shrimp, chunks of marlin and a bit of melted cheese, the whole thing grilled. On the side was shredded lettuce, chopped tomatoes and onions, and a cup of avocado cream sauce.

The result was delicious, especially spiked with the condiments. This would not have constituted a meal under most circumstances, but being moderately hungry, the taco was moderately filling, so I left satisfied.

El Sinaloense also serves beer and Micheladas (the restaurant’s name ends with “Tacos & Beer”) and $25 towers of meat and vegetables for groups. As I left, the dining room that had been near-empty at 6 p.m. was getting busier. I’m glad I pulled into El Sinaloense. 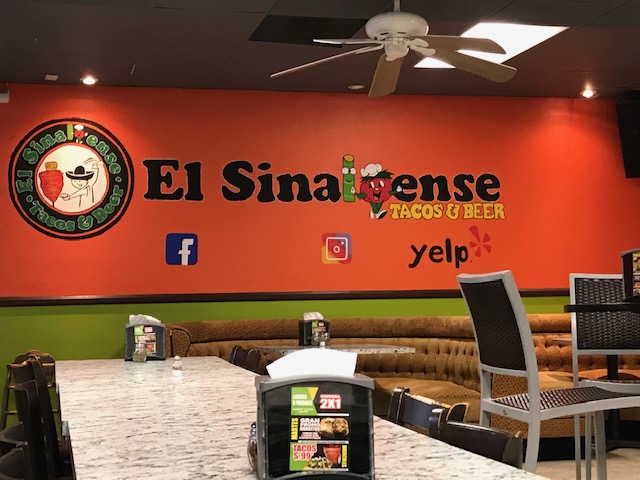 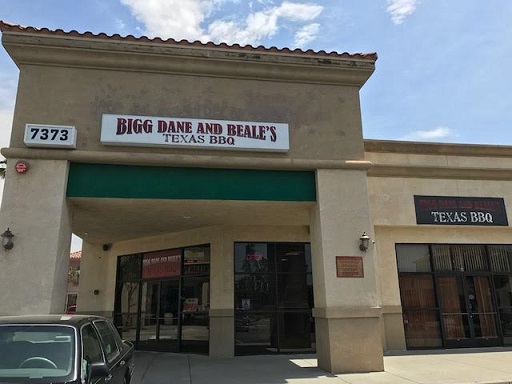 I read about Bigg Dane’s in late 2015 but only recently sought it out, after 1) remembering and then 2) learning it’s on the near side of Fontana, off the 15 at Base Line Road, a stone’s throw from Rancho, rather than a few further miles out of the way. Actually getting to Bigg’s from the freeway is tricky due to the layout of the intersection, but a couple of counter-intuitive left turns and I was in the shopping center. 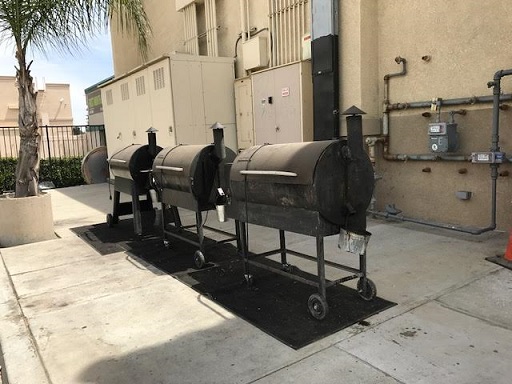 There’s a smoker out front, a good sign; inside, you order at the counter and take a seat in the adjacent dining room. The menu has plates with two sides, sandwiches with one side and a few lunch specials. My first visit, I ordered brisket with collard greens and cornbread ($15). 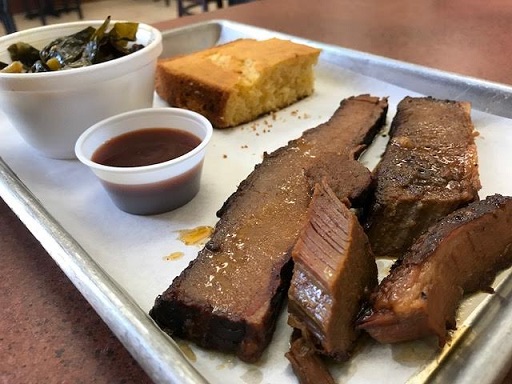 My food was delivered on a metal tray lined with paper: two long strips of brisket, sauce on the side, a plate of cornbread and a dish of greens. It was all good.

Wanting to try the ribs, I returned the next week for the three-rib lunch special ($10) with one side, mac and cheese. The mac was dense and cheesy. 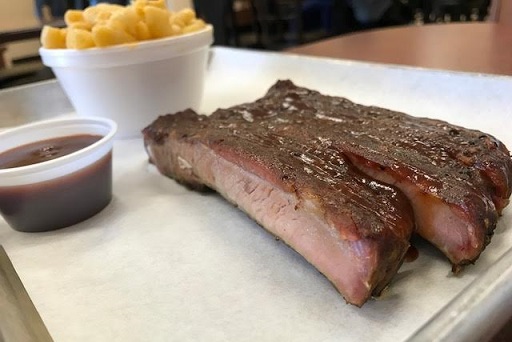 As soon as I picked up the first rib, its heft, density and smell let me know these were serious. The meat was tender but firm and came off the bone cleanly; the taste was excellent. I am no barbecue expert, but I’ve eaten at Franklin’s in Austin, Pappy’s in St. Louis and Bludso’s in L.A., and while Biggs’ weren’t at that level, nor would I expect them to be, they were reminiscent of that level. The ribs have a dry rub and don’t need sauce, and yet the thin, slightly sweet sauce on the side was quite good too.

The dining room is clean and new, a little sterile due to minimal decor. I was surprised how unoccupied it was given the quality of the food. Maybe it’s busier on the weekend. Owned by two longtime friends, it’s a family-run operation, and on one visit a young daughter was stationed at a table, coloring. Gotta like a place like that. 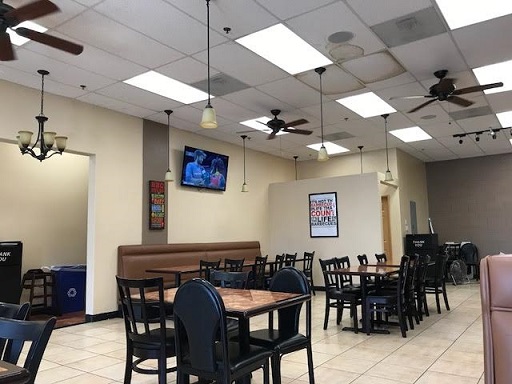 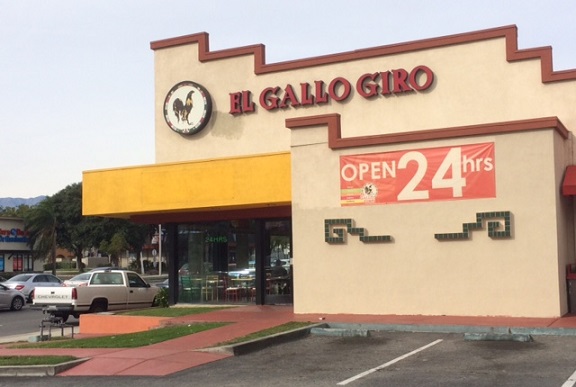 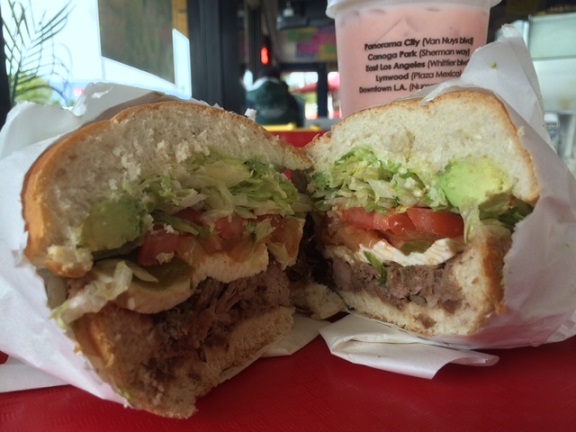 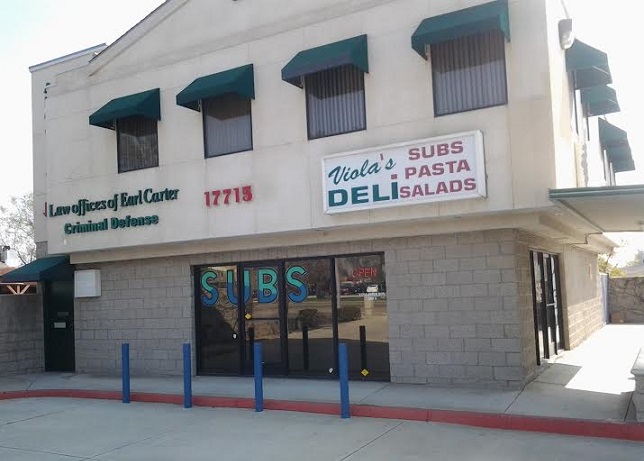 It’s rare that I visit Fontana for anything. We don’t officially cover Fontana anymore, that duty being left to our sister paper The Sun, and downtown Fontana is so far from our Ontario office (15 miles) that it’s impossible to get over there on a lunch hour.

After Pomona’s State of the City luncheon, though, Fairplex CEO Jim Henwood, of all people, was telling me about a little deli in Fontana. A native New Yorker, Henwood said Viola’s Deli made cold subs in Big Apple style: shredded lettuce and olive oil tucked inside a tube of cold cuts and cheese, the whole thing inside a roll laid flat for just moments on a grill. (I think I’m remembering this right.)

So I began looking for an excuse to go to Fontana. Conveniently, the new library, which I’ve been hearing about for two years, is opening and as a library fancier, I intended all along to check it out. Arrangements were made for a tour at 1:30 Wednesday, which allowed me to combine the trip with — yes! — lunch.

Naturally, Viola’s was my choice. I was joined by reader Tom Leak, a Fontana resident and real sandwich maven, who treated, which was awfully nice of him. Good ol’ Fontana hospitality.

Viola’s is at Alder and Arrow, across from the Fontana courthouse and a little east of downtown. It’s been there since 1990 and its owners are former N.Y. deli folks, according to their website. Viola’s shares a small building with a law office. The deli is an unprepossessing place with a counter and a dozen two-chair tables.

I got a capocolla sub and Leak had the oli. (He’s not sure what the oli is but he liked it.) Mine was as Henwood had described it, and very tasty.

Cold or hot subs are $4.29 (small) to $5.35 (large). Viola’s also makes brownies, cakes and cookies; one of the lunch specials gives you a sub, soda and piece of cake. I’m thinking of applying for work at the law office.

Another menu item may be coming. A handwritten sign on the counter polls customers: “Would you prefer a steak, chicken or turkey pot pie?” Based on the hash marks, turkey and chicken are in a dead heat, with steak lagging far behind with three votes. It’s too late for California to decide on Hillary or Barack, but the Viola’s pot pie election is on.

* Update February 2014: Returning to Viola’s six years later for photos, I got a 10-inch NY steak sandwich, chips and soda ($9.60 with tax, below). Wow, what a sandwich! Grilled ribeye, lettuce, onion, tomato and American cheese, inside a warm and crisped roll, which may have been buttered. The menu says the steak is “grilled with our special blend of herbs and spices.” Whatever they did, it was delicious. I can’t be making hour round-trips to lunch, but this was a darned good sandwich. I’ll be back in 2020. 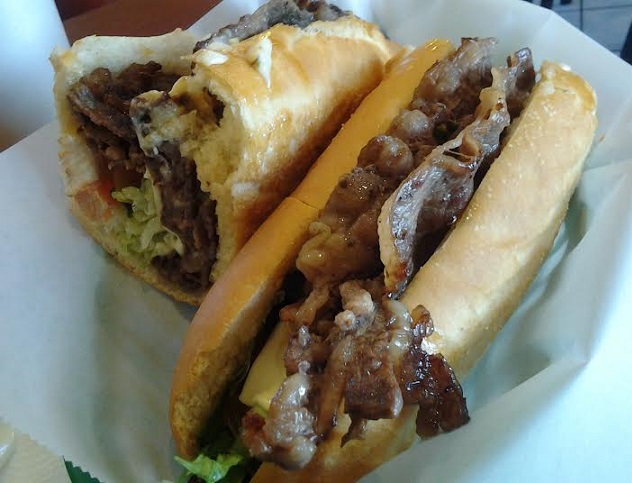 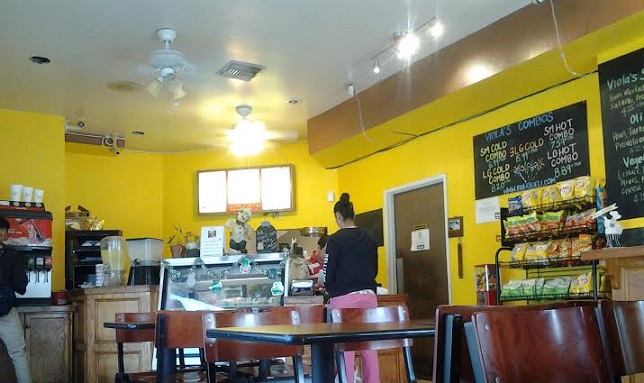