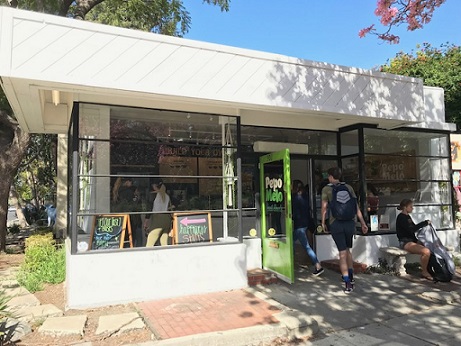 Taking the place of a Chinese antiques store that never seemed to have any customers and yet hung on for years, Pepo Melo is a hive of activity in the morning, and for all I know at other times of day as well. It specializes in fruit bowls, most of which are vegan, and seems to be a hit with the colleges crowd.

I’ve been there twice so far, starting with an inaugural visit on my birthday, which shows I had confidence in them. I wanted a light breakfast to take me with on the train.

You might remember the building as the Sugar Bowl, a malt shop that was a setting in a “Fugitive” episode of the 1960s. It’s across from the Harvard Square complex that was once the Village Theater.

The Pepo Melo menu is below (click for a larger view), although you can customize your own bowl based on the fruits and toppings that are available. The bowls are made in front of you behind a row of ingredients, like at Chipotle. 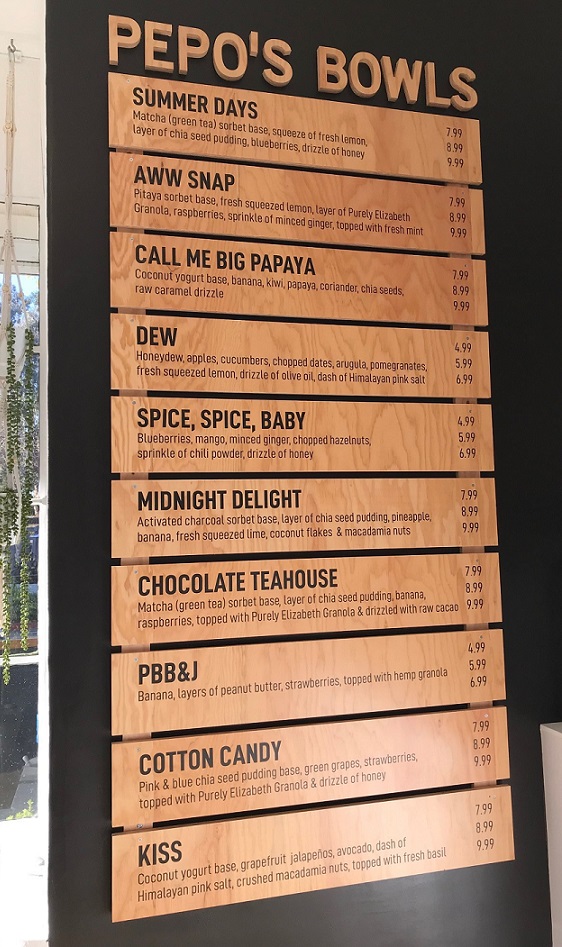 I went with the PBB&J ($6, medium), with strawberries, bananas, hemp granola and peanut butter drizzle, plus a $2 fruitade drink, cucumber mint, of the two options. These are made from leftover fruit from the previous day. The drink was refreshing and the cost less than expected. 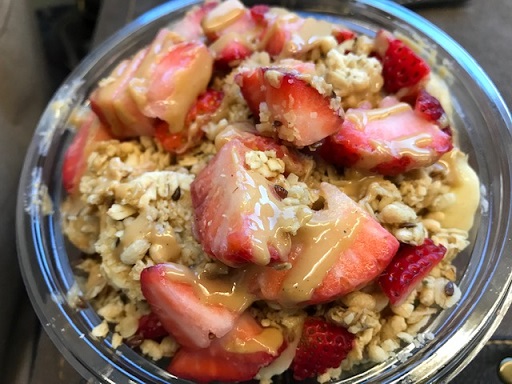 The bowl was similar to the chunky strawberry bowl at Jamba Juice, a favorite, only without yogurt. It was tasty and had lots of fruit, but was slightly dry.

I returned a month later for an Aww Snap ($9), with ginger, mint, lemon, raspberries and pitaya sorbet base. (It’s supposed to have granola but they were out.) An impressive amount of labor went into this, with the employee slicing mint, grating ginger and cutting a fresh lemon to squeeze. The result had zing. I liked it, although I missed having granola.

Pepo Melo has no seating, but Shelton Park is right across the street, and that’s where I ate the Aww Snap bowl. 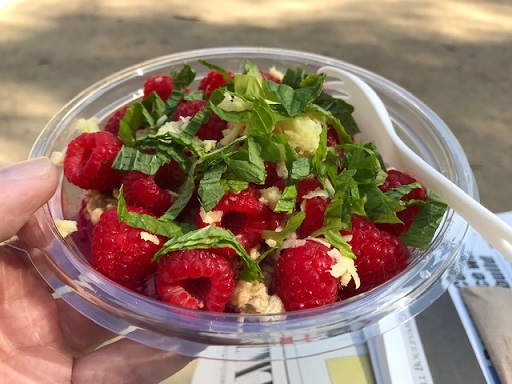 According to a story in the Student Life campus newspaper, the owner is a melon broker, Pepo is the scientific name for the flesh of a melon and Melo is one letter shy of melon. I think it’s a nice addition to the Village, although a Claremont friend hooted at the whole idea: “All they sell is fruit bowls? Who’s going to buy that? I don’t give them long.” Hey, I’d have said the same thing about the antiques store! 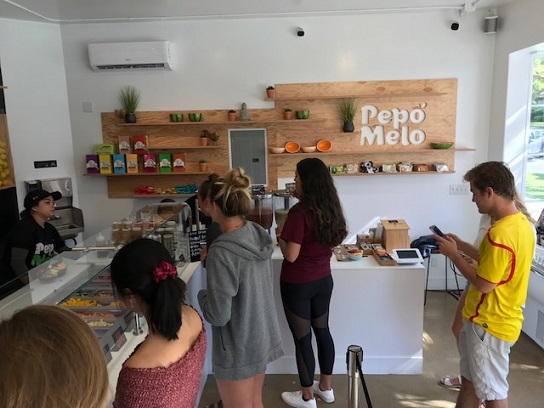 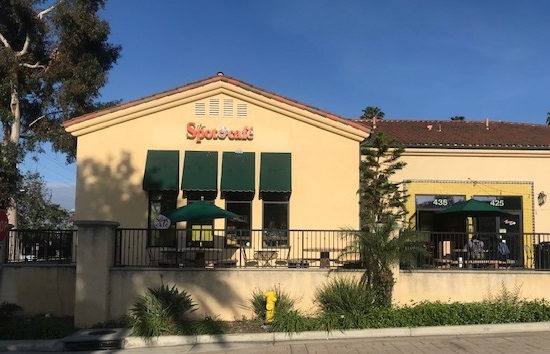 In a prime location in the same building that houses a Trader Joe’s, the Spot Cafe has been serving up healthy fare for a few years now. I’ve been in a couple of times for breakfast, but it’s never been my (wait for it) spot.

Then a friend offered to meet up for dinner, wanted a salad and suggested the Spot. A look at the menu online revealed that the Spot has a more extensive menu than I’d realized, including a half-dozen salads. It dawned on me that the Village is light on places to get a salad. I used to get one now and then at zPizza, which recently closed.

The Spot also has sandwiches, wraps and more, with smoothies, fresh juices, protein shakes and coffee the specialty. Acai and pitaya bowls and bagels are offered at breakfast. They also make pizza, of sorts, on tortillas. (It’s that kind of place.) 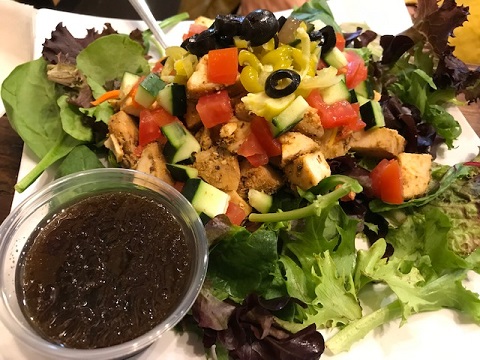 My friend got the grilled chicken salad ($8 for a full), with mixed greens, cucumbers, red onions, tomatoes, olives, pepperocinis and balsamic dressing. “The salad was super filling and tasty,” she declared. As for breakfast, “I usually get their bowls, which I love,” she said, saying they’re more filling than the ones at Jamba Juice. 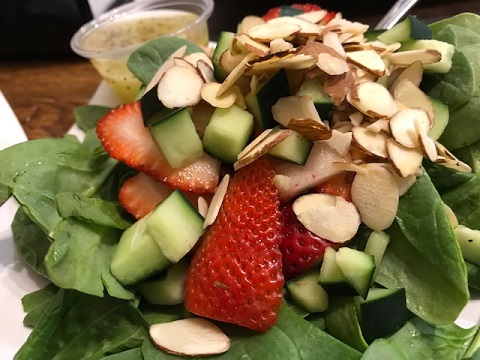 Having had a large lunch, I got a half-size salad: strawberry and spinach ($5.25 half, $7 whole), with cucumber and almonds. OK, more almonds than I’d prefer, but a good salad, enlivened by a light lemon poppyseed dressing.

May I say it hit (wait for it) the spot? 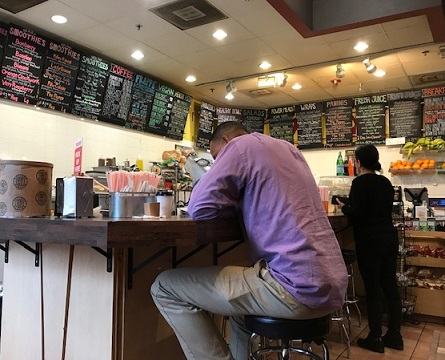 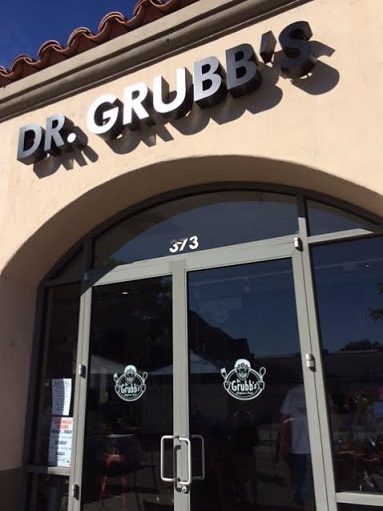 Dr. Grubb’s opened in the Village in the mid-’00s, taking a spot that had been occupied by a short-lived empanada restaurant that I really liked. Grubb’s, a healthy option where you pick a “protein,” a sauce and a side, didn’t wow me on my one and only visit, pre-blog, and in fact struck me as slightly weird and unsatisfying. Did I want a foam plate with chicken, couscous and a sauce, to be consumed with a plastic knife and fork, for a couple of dollars more than I wanted to pay? I didn’t.

But Dr. Grubb’s has hung in there and became a favorite with the college crowd, and it recently moved into larger quarters two doors west, the former Salad Farm space. Some friends and I gave it a chance for lunch on a warm afternoon recently. 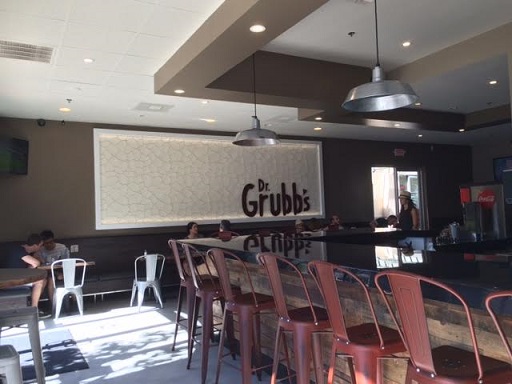 The interior is impressive, with a long, polished bar at which you can eat taking up most of the length of the storefront. There’s some regular seating too, and patio seating as well.

The menu is larger, but it’s still a protein, sauce and side operation. (They also have four beers on draft.) Proteins include salmon, shrimp, tofu, chicken and steak, with one-side combos ranging from $10 to $14. The idea of selecting a protein, which was an eye-roller for me originally, seems mainstream in the Chipotle era, by the way. We ordered and adjourned to the patio. 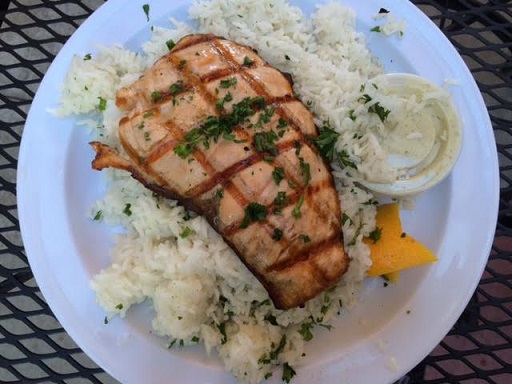 Whereas Dr. Grubb’s had at first seemed somewhat provisional, now they give out plates and actual silverware. I liked my salmon with lemon thyme sauce and white rice ($12) and may have made the best choice of our group. 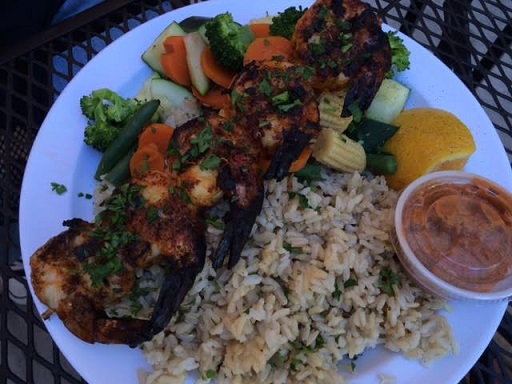 One got shrimp with sun-dried tomato pesto and vegetables. The latter were bland, the former “fantastic.” “The sauce kind of makes it,” he said. “I wouldn’t have expected sauce to be a choice. Don’t neglect the sauce.” He smeared leftover sauce on his vegetables and they were improved by the addition.

Another got tofu with lemon thyme and vegetables. Finding them both “tasteless,” she also heaped praise on the sauce for rescuing her meal. “Thank goodness for the sauce,” she said. 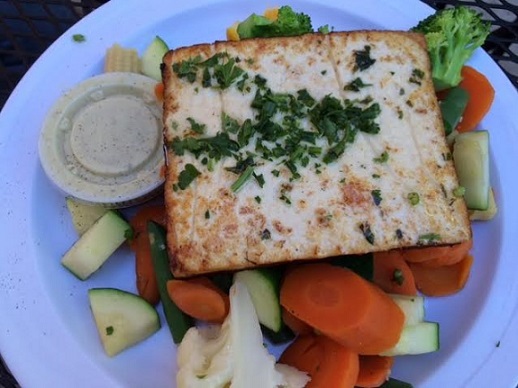 The last, but not least, of our group got chicken with mango sauce and penne pasta. It was good, he said, but he rued his choice of mango sauce: “The guy recommended the garlic aioli and I probably should have done that.” (By contrast, I asked what sauce I should get and followed the advice. I am not bigger than the counterman.) 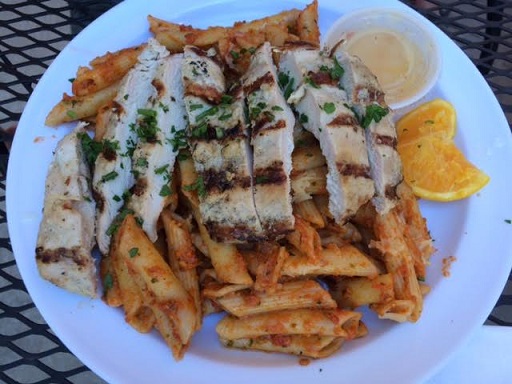 Everyone said they would consider going back, even the vegetarian, although I don’t know that anyone would order the vegetables again. I dodged a bullet on that one. At this point I go to Dr. Grubb’s once a decade, but I may pick up the pace. Final thought: Don’t neglect the sauce. 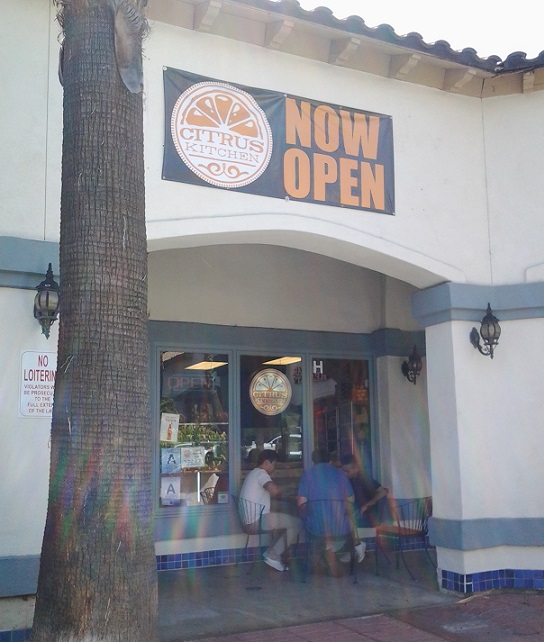 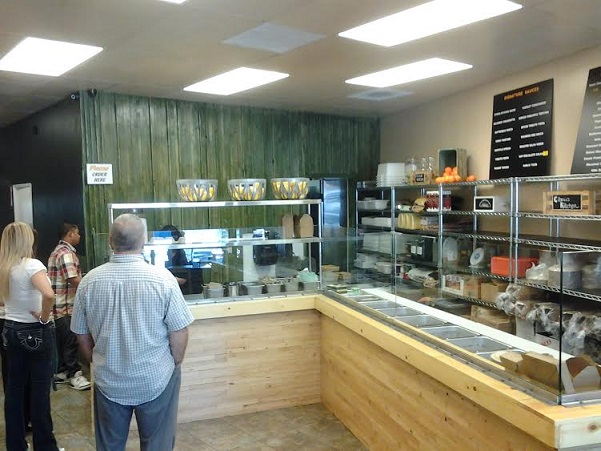 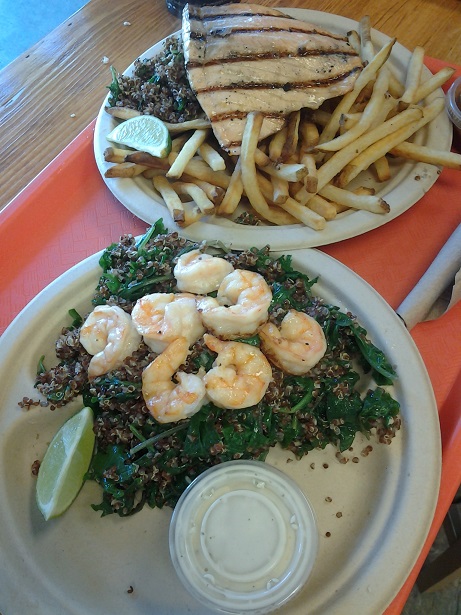 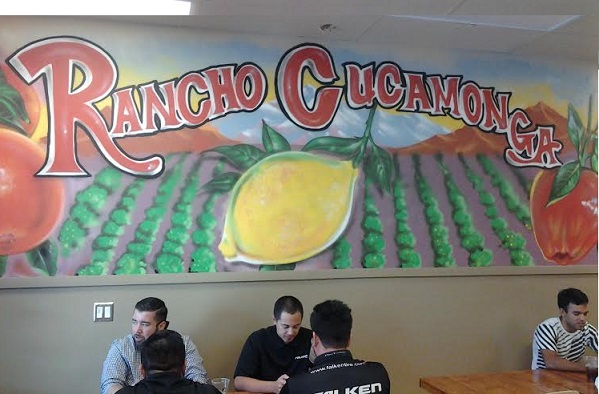