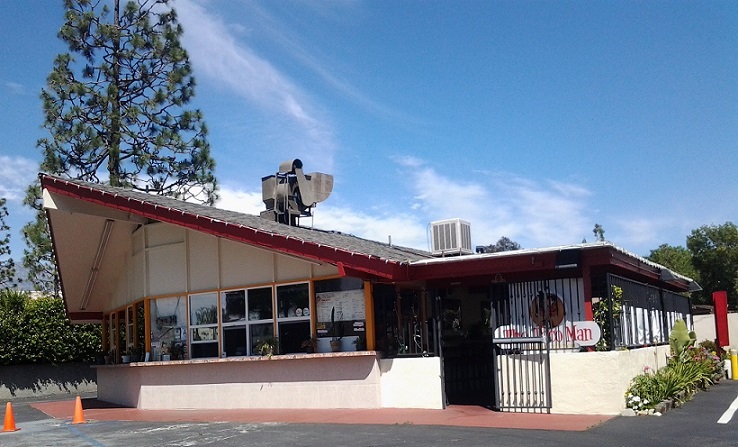 It’s a new restaurant — well, it opened in 2013 — but it’s in a vintage building, a Tastee Freez that dates to 1961, which in Montclair is practically the Paleolithic period. After a string of taquerias and other businesses in that spot, Taco Man spiffed it up and moved in. It was, and remains, a catering business that now has a brick and mortar location. (They produced a cute video prior to their opening.)

There’s no interior seating, but there is dining in the covered breezeway, where there are four picnic-style benches and a counter with seating for 10. And of course they have takeout.

I had lunch there on a hot day back in February and returned this week for a second meal and more photos.

The first time, I had three tacos ($1.49 each, bottom): carnitas, al pastor and cube, a mixture of chicken and chorizo. Really good street taco-style tacos, with the pineapple atop the al pastor a welcome touch. It didn’t surprise me to learn that owner Israel Miranda is a native of Mexico City as those are the type of tacos I had on my visit there in 2011.

This week I tried an al pastor burrito ($6.50, middle), which also has the pineapple, as well as finely shredded cabbage (the effect was like slaw) as well as onions, beans, cilantro, sour cream and salsa. A little different, but tasty, and also large and filling. They also have a double burrito named The Big Donk, plus quesadillas and a couple of healthier options, a protein bowl and low-carb tacos. They have vegetarian and vegan options too not reflected on the menu.

Its website has the restaurant’s menu, story and more. Alas, the former Tastee Freez doesn’t have ice cream cones. 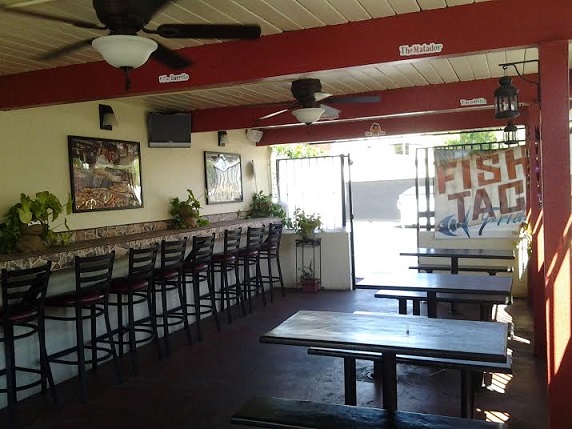 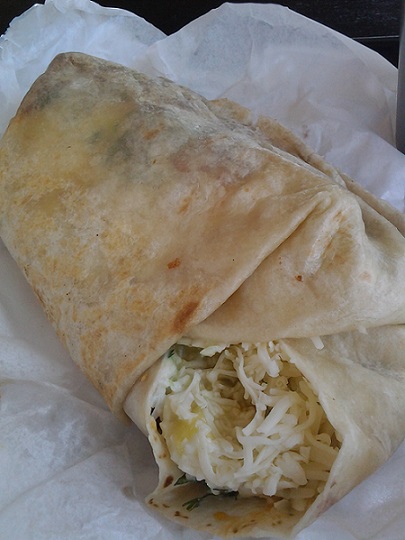 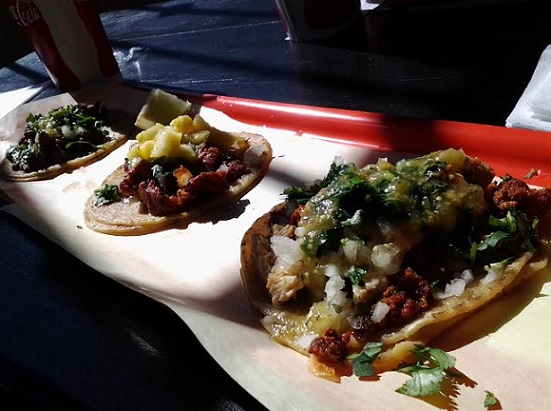 In the Inland Valley, where Korean restaurants are rare, Korean BBQ is the venerable granddaddy of them all. It’s located in a strip mall next to a laundromat along Holt Boulevard. Yes, it’s an unpromising location, but Korean BBQ has been there since sometime around 1990, so it must work for them. It used to have a giant yellow pole sign out front until a makeover to the center required a more modest sign.

My friends Meg and K. (of the M-M-M-My Pomona blog) highly recommend the place, and since they used to live in L.A.’s Koreatown neighborhood, their advice was heeded. The three of us met for dinner there on a recent Sunday.

The interior is dated, especially the paneling, but it’s clean and pleasant enough, and Korean restaurants generally are utilitarian. The staff brought out the usual array appetizers in small dishes: kimchi, fish cake, bean sprouts, etc.

We ordered short ribs ($25) and beef ($18) off the barbecue menu, plus a bowl of bibimbap (forgot the price, sorry) to share. The barbecue items are cooked on a grill in the middle of your table. The staff fires up the grill, puts the meat on and returns to turn it or serve pieces that are done.

Korean barbecue is even rarer than Korean restaurants out here; I’ve tried two Korean places in Rancho Cucamonga and one in Chino Hills, and none of them had tabletop barbecue. The food in Montclair didn’t impress me as much as my one previous experience with Korean barbecue, at the highly regarded Park’s in L.A. — the meat wasn’t of as high a quality — but I liked the meal, the staff was nice and Montclair is a lot closer than Wilshire Boulevard.

The restaurant gets 4 stars on Yelp, where they have the name as Arirang. The menu and sign say Korean BBQ (as did the old sign), but the strip mall’s name is Arirang Plaza, and for all I know that’s the restaurant’s secret name.

A few weeks back I wrote about the new Shakey’s in Rancho Cucamonga and promised I’d revisit the one in Montclair. Pretty much the same food, obviously, but the Montclair Shakey’s holds a small place in my heart.

After all, it’s the oldest chain restaurant location in the Inland Valley still in operation. The Montclair location has been serving up pizza since 1961, nearly 50 years, without a break. Any other chains that arrived earlier have closed.

The enormous paddle-like sign out front is clearly original, as sign codes today would never allow a sign as large as a tennis court, and the exterior is basically unchanged too. The interior is revamped, however, other than a few lamps.

But I like this Shakey’s anyway. The food’s fine and they do the Bunch of Lunch all-you-can-eat special from 11 a.m. to 2 p.m. weekdays ($7.50, drink extra). There may only be two pizzas out, not 10 as in Rancho Cucamonga, but this is a smaller operation.

Assistant manager Gina Amir is one of the friendliest restaurant employees you’ll meet and it’s her personal touch that keeps customers coming back. Frankly, this Shakey’s could use your business, so if you’re in the area and you like Shakey’s, check ’em out.

I wrote a column about the place in 2006 that you can find by clicking below. In it I listed runnerups in the chain-restaurant longevity derby and at least two of them — Wienerschnitzel on Mountain in Ontario and Sizzler across Holt from Shakey’s, have folded since then.
END_OF_DOCUMENT_TOKEN_TO_BE_REPLACED

I’d seen Los Portales for ages in the strip center behind the estimable Cafe Montclair, but hadn’t yet gone in. That is, until looking for a new place to eat before Monday’s Montclair council meeting and finding most restaurants on Central closed, Mondays being what they are. Los Portales it is!

I was pleasantly surprised how large the interior is and how nice it looked. There were at least four dining rooms and the one where I was seated had banquette seating, those wooden booths with high backs. Chips, salsa and a menu were quickly delivered. The place was moderately busy.

The menu has plenty of seafood and steak dishes in the $10 to $15 range. Not having time to linger, I opted for the fish taco plate, grilled ($9.95). The two tacos had at least an entire filet between them, more fish than Rubio’s would put in a half-dozen tacos, plus some cabbage, diced tomatoes and cilantro on corn tortillas. Double tortillas would have made the tacos easier to eat, but I felt like I got my money’s worth. The plate also came with beans and rice. A horchata ($2.25) washed it down well.

My first impression of Los Portales is positive and it may be one of the valley’s better Mexican restaurants. Anyone else been there? Do any of you know the location’s history?