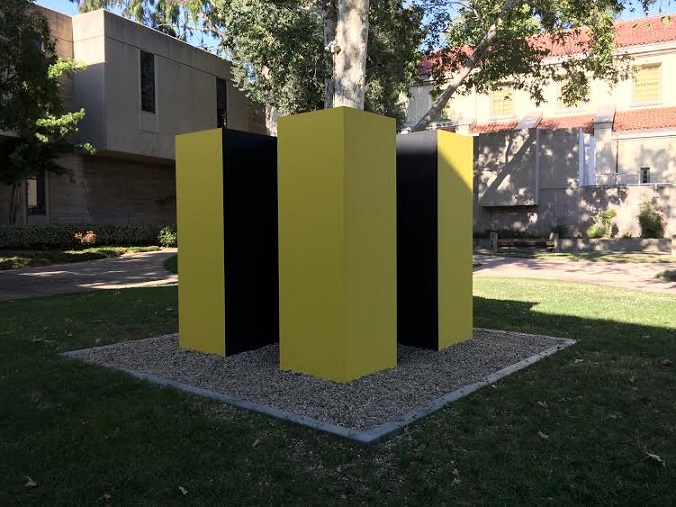 Artist Chris Burden, who died Sunday at age 69, is a Pomona College alumnus, class of ’69, whose early sculpture “Untitled Sculpture” is on permanent display at the college. Above and below are views of the piece, with a plaque in the lawn giving Burden the credit.

My Wednesday column is about Burden, and there’s an accompanying video that I shot Tuesday morning at the sculpture. The college’s statement about Burden is here. Two more links, both to the LA Times: his obituary by art critic Christopher Knight and an appreciation of “Urban Light” and Burden by architecture critic Christopher Hawthorne. 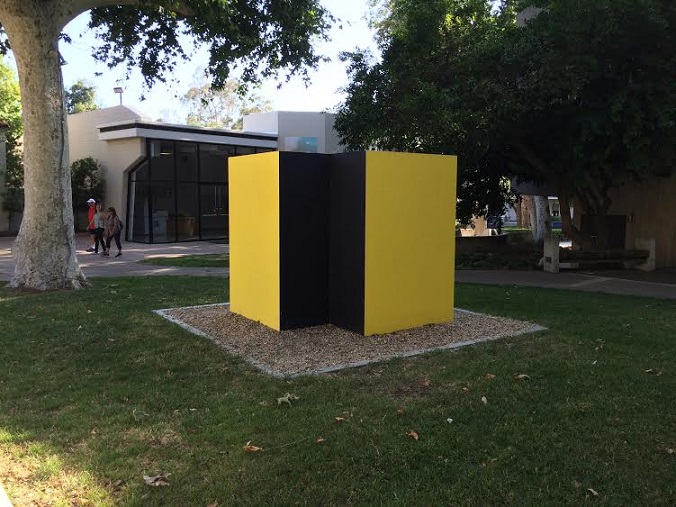 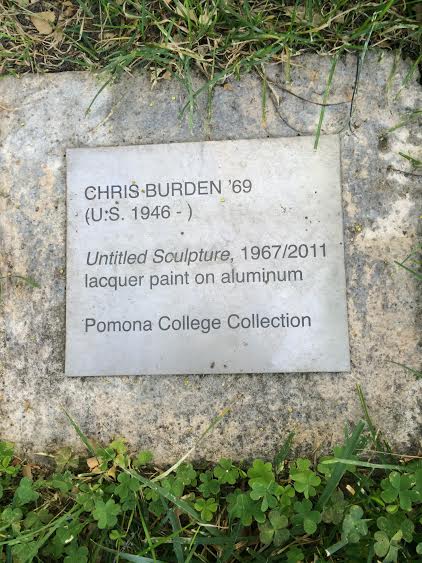 Below are his two best-known works, “Urban Light” and, at bottom, “Metropolis II.” A video of the latter can be seen here. 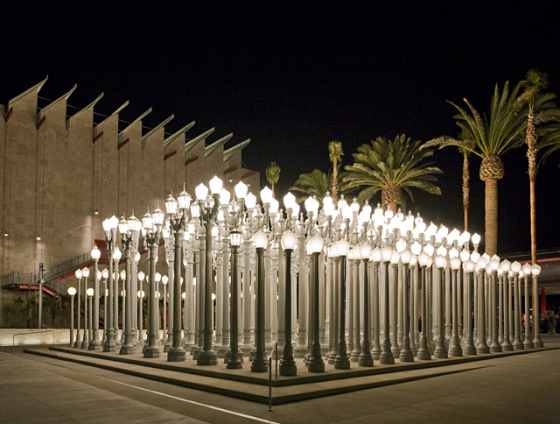 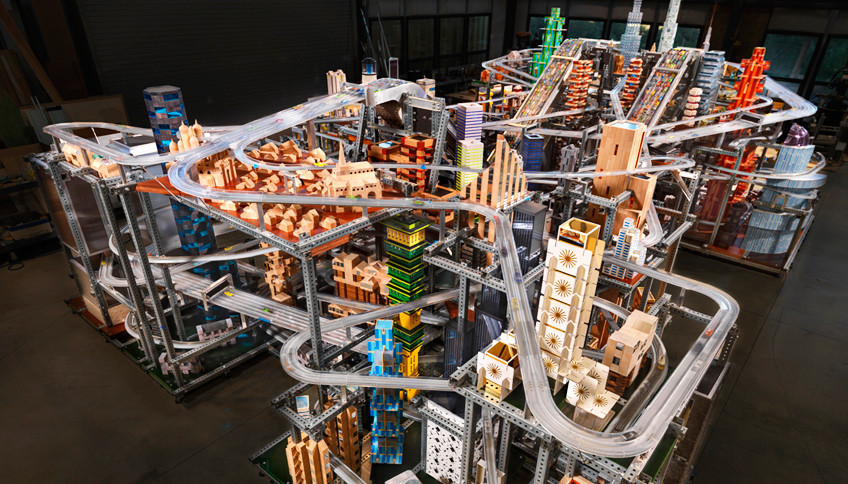 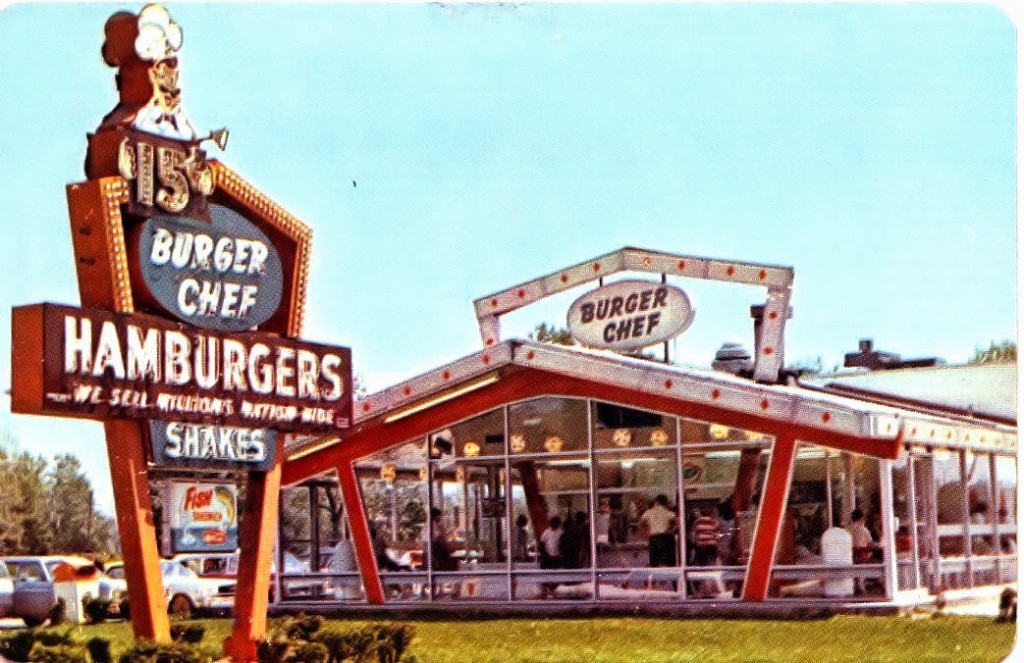 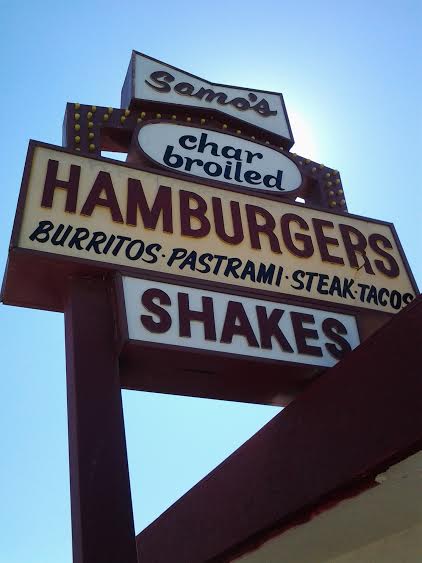 Samo’s is a burger shack in south Pomona next to Garey High, probably an optimal location to catch young people in search of cheap eats. I ate there once a few years ago and later discussed the place with a friend who goes there; she told me she informed the owner that someone from the Daily Bulletin had been there, and his reaction was astonishment, maybe pride.

I was reminded of Samo’s after “Mad Men” set a scene at a Burger Chef (restoring a vacant Burger Chef in Rialto for the shoot) and someone informed me Pomona has two of them: Golden Wok on north Garey and Samo’s on south Garey. Unlike the heavily remodeled, and popular, Golden Wok, Samo’s, I realized, still has the Burger Chef-era sign, even if the building has been stuccoed over.

So it had been on my mind to go back and feature Samo’s here, and when a friend wanted to meet for lunch in the Pomona area, I suggested Samo’s.

He was still parked in his vehicle when I pulled up. “Is this really where you want to eat?” he asked skeptically, giving me a chance to back out. I affirmed that it was. As I reminded him, I’d described it to him as “a beat-up burger joint,” so I hope he wasn’t under any illusions of white tablecloths.

The menu is broad, as it is in most Greek-owned burger emporiums, with Mexican food, a few random sandwiches and a couple of dinner plates. I got the burger combo with fries and soda ($4.90 with tax); he got a carne asada burrito (price unnoted). We sat in the lonely dining room with its yellow and blue-cushioned molded plastic booths.

The burger was a typical thin fast-food patty, but the bun was broad; the sandwich was dressed with tomato, lettuce, onion and thousand island. They were generous with the fries too. It was a filling meal and I ate only half the fries. My friend’s burrito fell apart — he’d opened the wrapper upside down and the burrito never recovered — but he used a fork and said it was pretty good, loaded with meat and beans.

Our only problem was that Samo’s has no air conditioning, or no working a/c at least. It was 95 degrees outside and maybe 105 inside. We hung out a while until the sauna conditions proved too much. I don’t envy the staff in the kitchen.

At least one commenter on Yelp says Samo’s has been there under the same owner for 30 years. Burger Chef faded out in the early 1980s after Hardee’s bought the chain. It’s likely that it’s been Samo’s longer than it was Burger Chef, maybe twice as long by this point. I can’t really sell you on Samo’s, and it may be years before I return, but as a Burger Chef fan, I liked being inside one again. 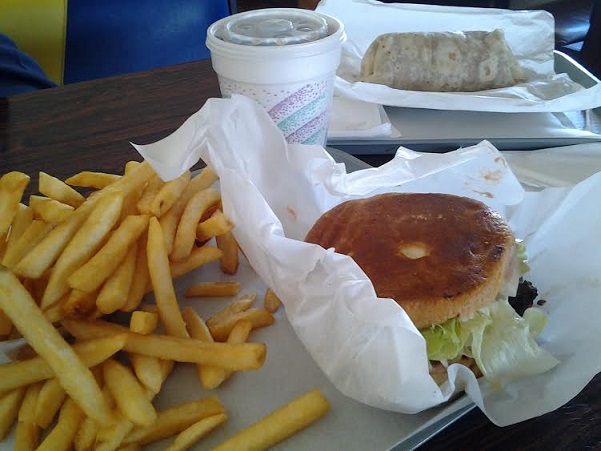 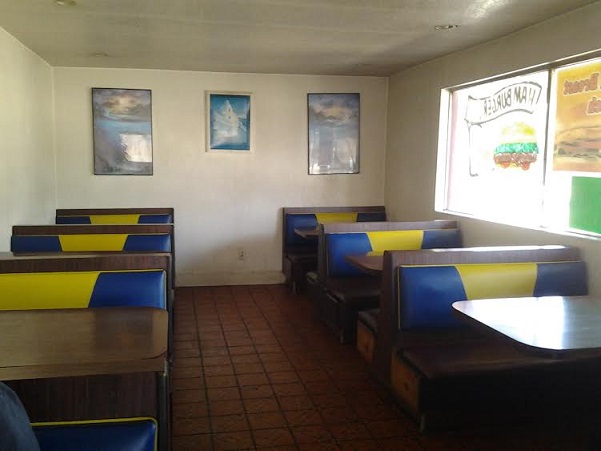