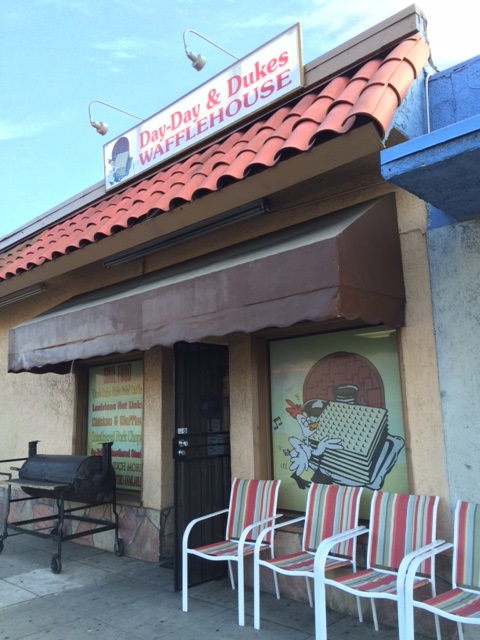 In my world Day Day’s for years was more rumor than fact. It was originally known as Day Day and Duke’s and had limited hours, but despite having a rough idea where it was, I never saw a sign in my occasional drives on Holt and was never entirely sure where it might be. I don’t know if it’s been in continuous operation or not, but the name (despite what the old sign says) is now Day Day’s, and its Duke-less incarnation seems to be more of a going concern, open six days a week and with the recent addition of dinner hours, until 8 p.m.

I still couldn’t find the place without looking it up on Google and noting the address, and without that I might never have found its unassuming storefront and small sign, especially after dark. Next door to the east is East End Liquor (despite the corner being Reservoir, not East End); next door to the west is an auto repair shop that was once the bar where the Mothers of Invention formed. So it’s a neighborhood with character.

Entering requires opening a screen door, a nice touch for a soul food restaurant, and inside it’s a small diner, with six booths and a short counter, everything in shades of brown. A friend and I met there for dinner recently, curious how the chicken and waffles would stack up against Ontario’s Maple House. 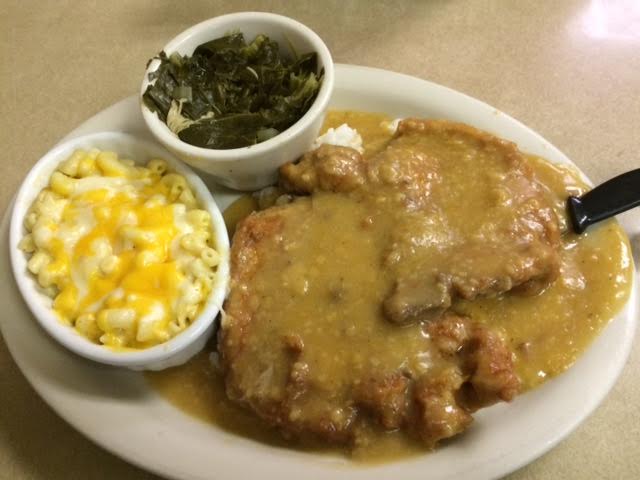 Confronted with the extensive menu, though, we each opted for other things. I got the Aunt Toe’s pork chops, smothered, with greens and mac ‘n cheese ($15), and he got the Big Pimp omelet with shrimp, chicken, jack and cheddar cheese, and mushrooms, plus a chicken wing a la carte ($14 total). Breakfast is served all day. 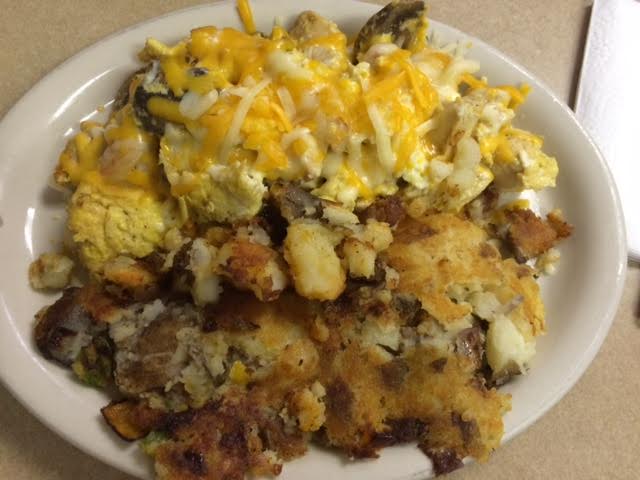 The omelet was inexpert, perhaps, but enjoyed despite its lumpiness, and the wing was praised. The pork chops themselves were the weakest part of my plate, with the gravy, rice and two sides the standouts. My friend had a Kool-Aid and, offered a refill, later wished he’d been told he’d be charged a second time. But overall, he liked the experience.

So did I. The place had a friendly, relaxed vibe. A TV in the corner provided the entertainment, “Wheel of Fortune” and a sitcom with a laugh track, rather than music.

There’s barbecue on the menu, but only on weekends. I went back that Sunday about 1 p.m. for lunch, hoping for ribs or brisket. The dining room was busy, but I got a seat and watched as several other tables turned over. Alas, barbecue, which seemed to be prepared at the owner’s whim, would only be available after 2 p.m. So I scanned the menu and got chicken and waffles: the Teasha combo ($12), with two wings, one waffle, an egg and grits. 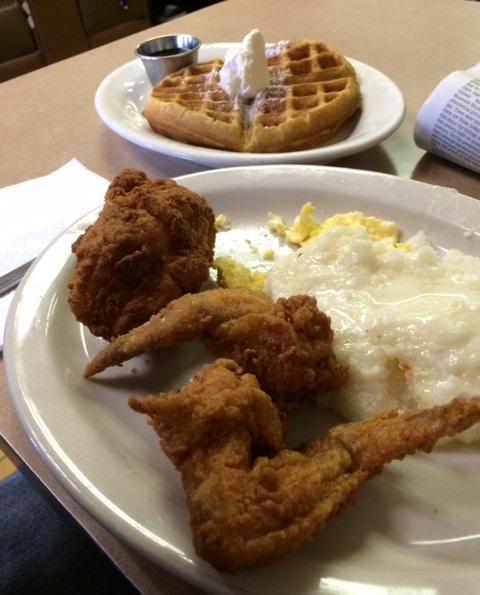 This was excellent: a fluffy waffle and prime fried chicken.

It came with three pieces, not two, which made up for the fact that other tables within earshot were told they had all-you-can-eat that day, and my server didn’t mention it. And also for the fact that my waffle arrived five minutes after everything else. Day Day’s is a little haphazard, perhaps, but the food and atmosphere more than compensate.

I even liked the grits, a dish I’d had once, in childhood, and didn’t really care for but thought I ought to try again. Since then I’ve had grits at Maple House, and Day Day’s were better; the chicken and waffle battle ended in a draw.

As the dining room slowly cleared out, and nobody needed my booth, I settled back to enjoy my Sunday newspaper in peace.

I would definitely return. If I ever get the barbecue, I’ll update this post. Or maybe I’ll let the barbecue remain as mysterious as the fate of Duke. 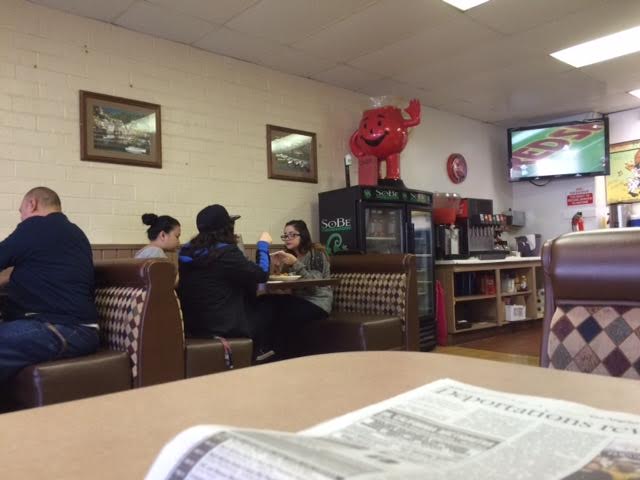 Update August 2016: So I did go back for barbecue. Just as I was ordering pork ribs, the fellow taking my order, who happened to be the owner, said for $2 more I could get the Big Dave ($17), with ribs, chicken, sliced beef and hot links, plus two sides. So I did that. (Mac and cheese and cornbread were my sides.) The ribs weren’t the best, but the rest was pretty good. That said, I like the breakfasts here more, and you can get them all day. 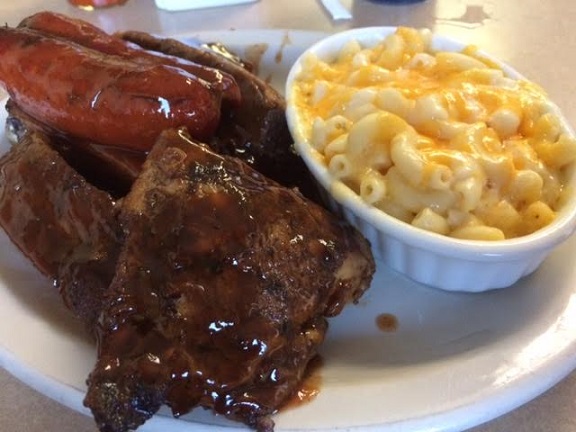 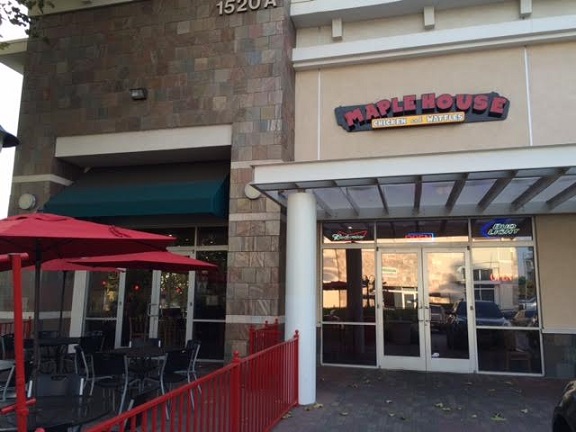 Chicken and waffles are hard to come by in the 909; I think there used to be a Roscoe’s in San Bernardino, but other than that, the only place I’m aware of is an obscure Pomona restaurant, Day Day’s, which isn’t open for dinner. But now there’s a spot in Ontario.

Maple House opened in March in what had been Sal and Sons Pizza, right off the 10 in the Gateway Center, near Starbucks and a cupcake shop. One of Sal’s sons is still involved, and the interior looks largely the same. But service is now at your table rather than at the counter and the menu, needless to say, is entirely different. (There’s also a patio with umbrellas.)

Have you had chicken and waffles? I have, a couple of times, at the Roscoe’s in Pasadena. The chicken and the waffle are usually plated separately, if you’re curious, and can be eaten separately, with the waffle more of a side dish, or eaten together. They do pair surprisingly well.

A friend and I tried Maple House for dinner recently. They serve several kinds of waffles (with such toppings as bananas, strawberries, pecans and Nutella) and various pieces of chicken, all cooked to order; they also serve omelets, salads, desserts — peach cobbler and sweet potato pie — and beer and wine. Sides include yams, mac and cheese, turkey greens and more. And my friend got a grape Kool-Aid. So it’s a soul food restaurant, and the background music included James Brown, but they’re not quite all-in.

The chicken coating was crunchy, with excellent texture, and the chicken itself came off the bone easily and tasted great; my friend declared it “awesome,” and as chicken is his favorite meal, that says a lot. The waffles were Belgian, puffier than Roscoe’s, and had powdered sugar too. Roscoe’s is a tradition, the food’s very good and the energy and vibe part of the experience; Maple House doesn’t have that, but the food is arguably just as good, and depending on where you live, it’s probably closer.

Each table, by the way, has a small sign advising that the food is cooked to order and that the chicken “can take up to a minimum of 30 minutes to prepare.” Isn’t “up to a minimum” contradictory? Mixed messages aside, our food came out in about 20 minutes during a slow period. Be prepared to wait a bit, but it’s worth it.

I’m not a guy who wants to order chicken and/or waffles very often, but it’s cool to have a local place, and one with good hours: from 9 a.m. daily, closing at 8 on Sundays, 9 on Mondays to Thursdays and 10 p.m. Fridays and Saturdays. 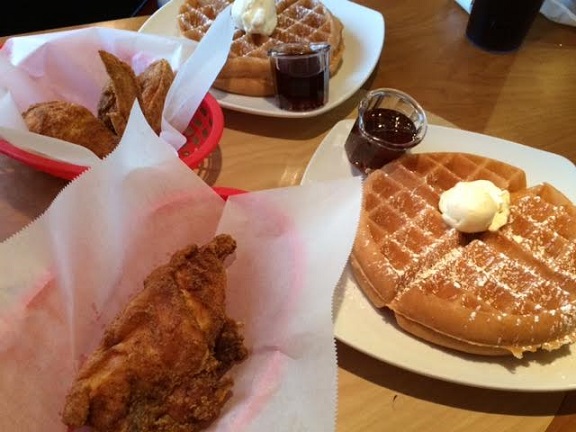 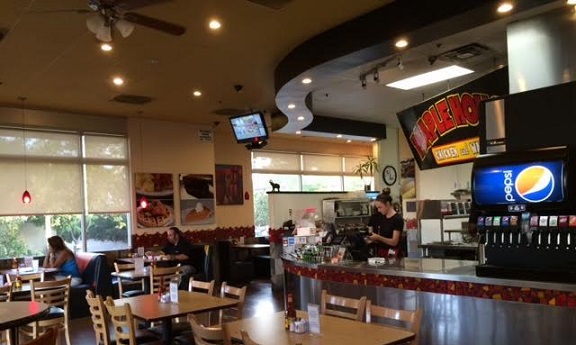 Update February 2016: Wanting to try more sides, I returned for dinner when hungry, getting a dinner plate with a waffle, chicken breast and two sides: greens and grits ($15). It was hard to get it all into one photo, but I did a better job than above. Excellent meal, and every item was top-notch. Too much food for me to try a dessert. 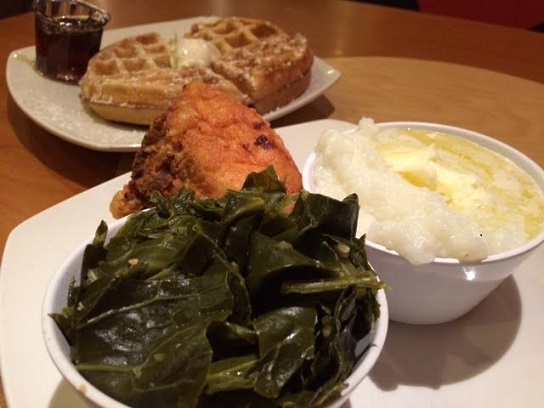 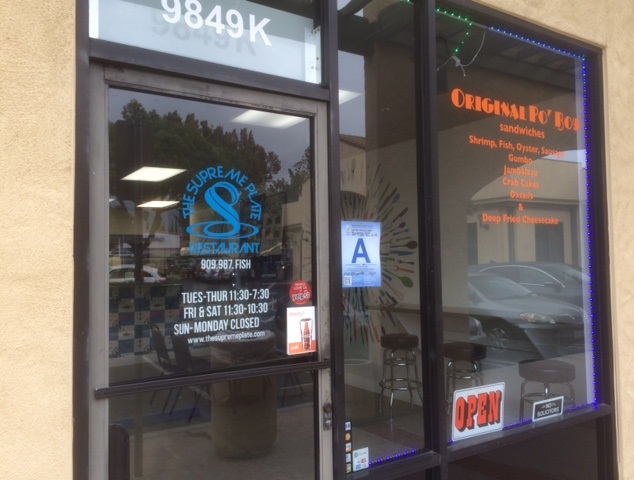 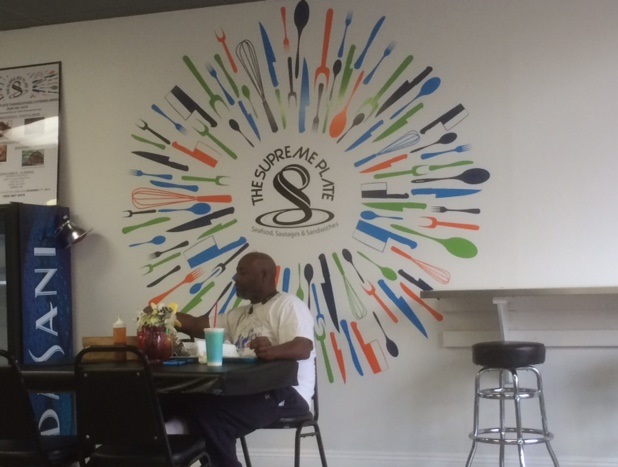 New Orleans-style food is hard to come by in these parts, if we politely overlook Popeye’s. Then the Supreme Plate opened in a lonely stretch of Foothill Boulevard east of Archibald. It’s tucked away in a fairly dismal shopping center, Plaza de las Brisas, whose anchor tenant is a charter school. (It also has the very good vegan restaurant Bright Star and Competitive Edge Cyclery.)

Reader Bill Velto raved to me about the Supreme Plate or I might never have learned it existed. Even knowing where it was, I couldn’t find it at first; the only sign is painted on the door and window.

The interior is mostly nondescript too: stackable chairs, black vinyl tablecloths, minimal decoration other than an excellent mural in street art style. The staff, though, is gregarious, with Deep South accents.

The menu is almost entirely seafood: plates and po’ boy sandwiches featuring shrimp, oysters, crab, catfish and red snapper. My first visit, I got a catfish po’ boy (pictured below) with a side of Cajun fries and a soda for $10. Good stuff, although my preference is for a filet, not a series of nuggets.

I returned for dinner one night and brought a friend. I got the jambalaya ($11, pictured below middle), loaded with chicken, sausage, shrimp and more, and half of which I took home for a second meal. He got a shrimp and oyster po’ boy ($13). “You pay more, but you get more,” he said, taking home half his sandwich. “I was going to offer you half, but it was too good. I want it for lunch tomorrow.” Well, he was honest.

The oysters looked so good falling out of his sandwich, I went back for my own shrimp and oyster po’ boy (pictured at bottom). Those were some mighty oysters. The staff is small and my sandwich took a half-hour to arrive during lunch hour, as a few people were ahead of me; you might call ahead or visit at an off-peak time.

I’ll keep going back. They’ve got sides like cheesy grits and sausage, hush puppies, red beans and rice, and more, as well as gumbo on weekends and oxtails with rice. I hope this place succeeds — there are always customers, a good sign, and it currently has a five-star rating on Yelp — because it’s a good addition to the area. The Supreme Plate is supreme. 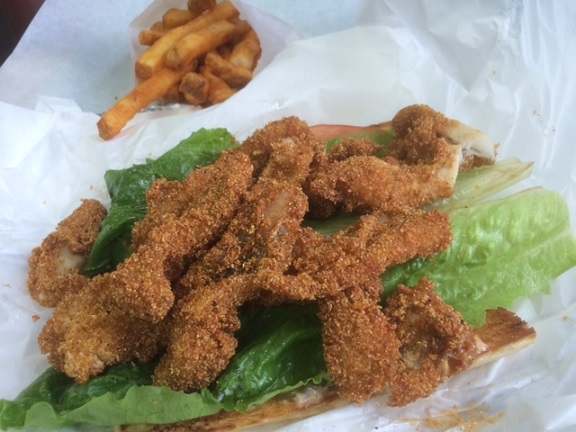 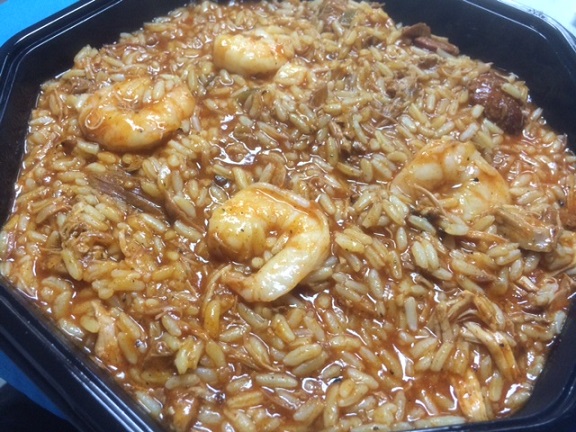 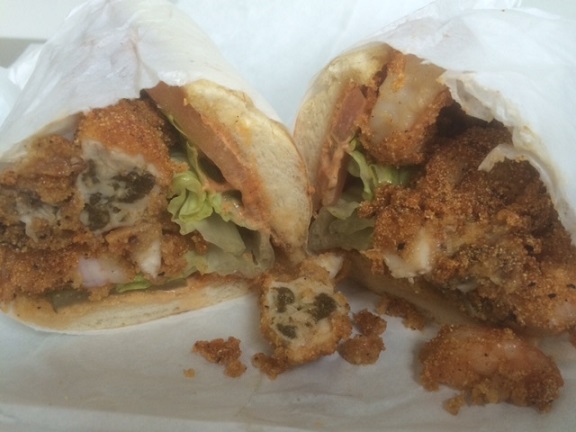 Update April 2016: I come here all the time. Here are two more photos: gumbo and grilled shrimp po’boy. They do not skimp on the shrimp. The collard greens here are good too. 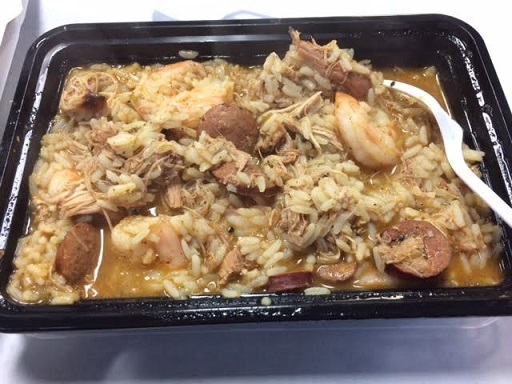 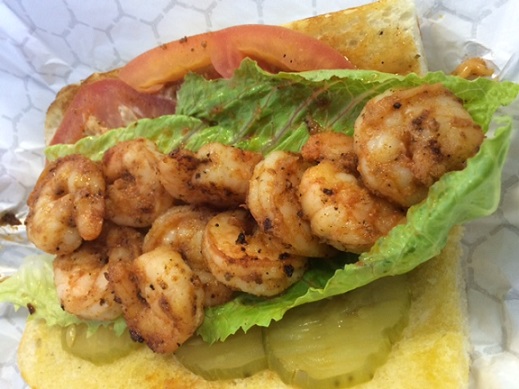